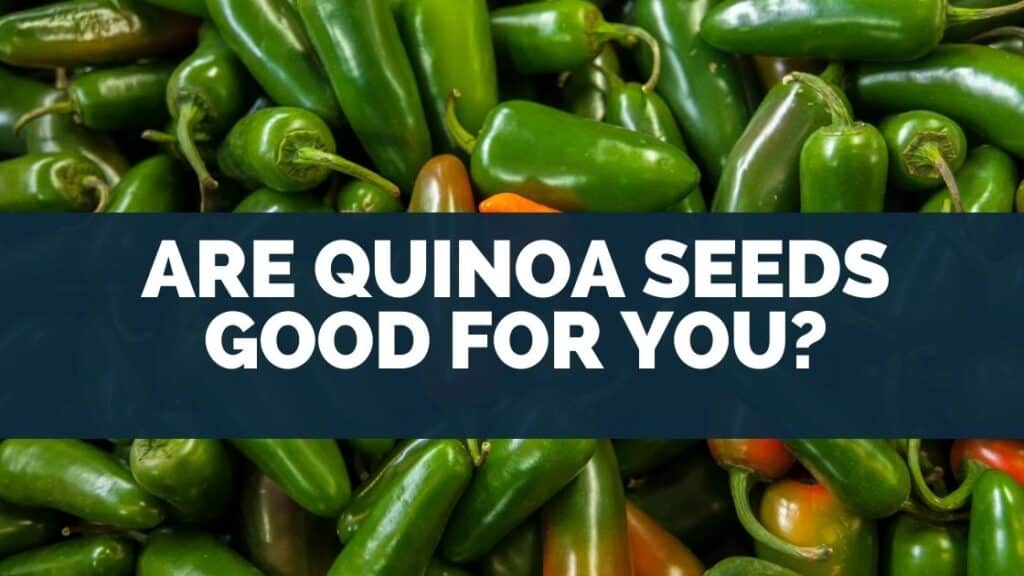 No, jalapeño seeds are not bad to eat.

The seeds are not spicy themselves but the compound capsaicin is found in the white membrane that surrounds the seeds.

Some of this rubs off onto the seeds making them taste spicy.

This spice can cause digestive issues in some instances.

Jalapeño seeds can be spicy but they are not bad for you.

The spice does not come from the seeds themselves but rather from the inner white membrane of the jalapeño.

If you have a digestive disorder or other gut problems, you might find that consuming jalapeños causes distress in your digestive system.

This is because capsaicin, the compound causing the spice, can irritate the gut lining or intestines.

This can have a laxative effect on some people. Diarrhea is one of the most common symptoms of this digestive irritation.

The spice can also cause heartburn, this is because spicy foods can trigger gastric juices to reflux.

The stomach acid can flow back up into your digestive tract, leading to the burning feeling in your chest.

The capsaicin also slows down your digestion, which means the food stays in your stomach for longer.

This increases your risk of heartburn.

This heartburn can also lead to insomnia, as it is difficult to fall asleep with a burning sensation in your chest.

Spice causes inflammation in the gut, this can then sometimes manifest in the skin in the form of flushes, an acne breakout or eczema.

A more severe effect of eating spicy food is that the spice can irritate the gut lining to the point that acute gastritis is brought on.

It is only temporary however symptoms can include vomiting, severe abdominal pain, and nausea.

Not everyone who consumes spicy food will experience these negative effects, in fact, most people won’t.

However, if you do then the culprit could be your favorite jalapeño snack.

Go to top
Table Of Contents show
1 Are jalapeño seeds spicy?
2 Why remove seeds from peppers?
3 Why are my jalapenos not spicy?
4 Which color bell pepper is the healthiest? 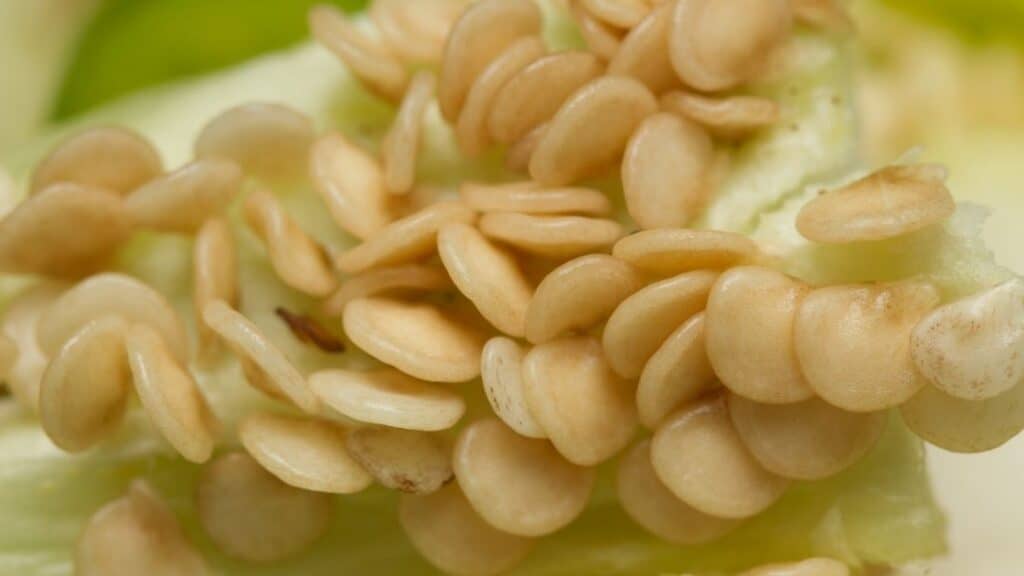 No, jalapeño seeds are not technically spicy itself, although they may taste spicy to eat.

The spice is actually found in the white membrane within the jalapeño, it comes from capsaicin, which can leave residue on the seeds, causing them to taste spicy.

Many recommend removing the seeds from the jalapeño prior to consumption because it is believed that this is where much of the capsaicin is stored.

Capsaicin is a compound that causes the ‘spice’ feeling, that familiar burning sensation is mostly down to capsaicin.

It causes the dilation of blood vessels, which can lower blood pressure.

It also provides benefits in the form of antioxidants and anti-inflammatory benefits.

It is sometimes used in creams to relieve pain as it depletes the chemicals that send signals of pain to the brain.

This little compound however is in fact contained in the white of the jalapeño pepper.

This white surrounds the seeds.

The seeds themselves are fairly harmless.

Because this chemical is located very close to the seed, they may have come into contact and some of the spice may have transferred.

However, they are not spicy themselves.

Often, when the seeds are removed, the pepper maybe a little less spicy but this is because of the capsaicin that may have rubbed on to it or that the white membrane has also been removed at the same time.

Why remove seeds from peppers? 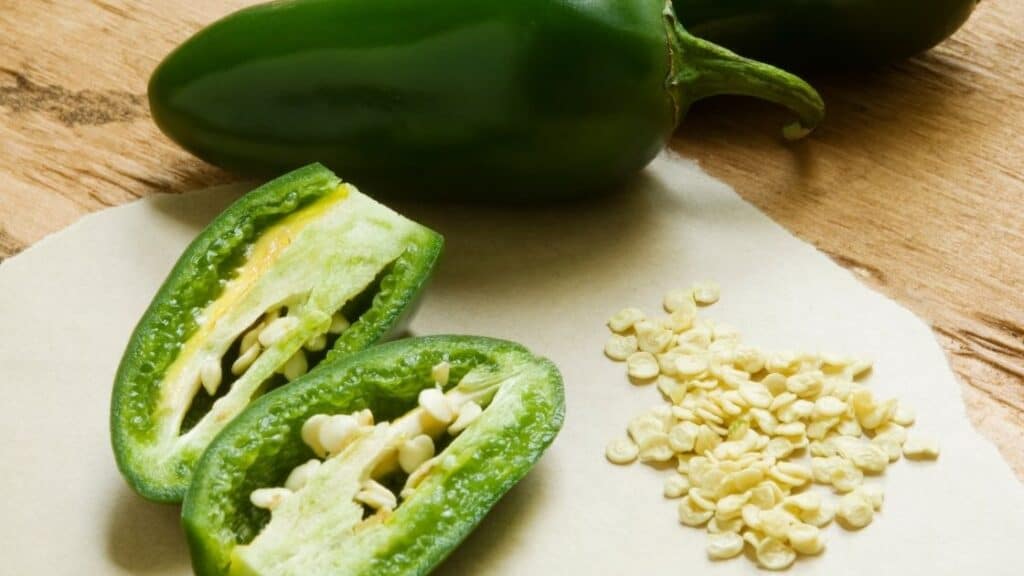 The seeds are removed due to the capacisin which may have rubbed onto them from the white membrane of the pepper.

Remove the membrane, and the seeds will reduce the spicy flavor from jalapeños.

Despite not containing Capsaicin, the heat-causing chemicals the seeds are often removed.

This is because the seeds are often coated in this chemical due to being in such close proximity.

Another reason seeds are often removed is due to the fact that they have a fairly bitter taste.

This taste can sometimes affect the flavors of a dish, and in order to avoid this, the seeds are sometimes removed.

If someone wanted to remove the heat from a pepper, they would need to get rid of this inner pith, which would mean that the seeds would also be removed with it.

Seeds are also sometimes removed due to the texture they provide.

Not removing them may lead to unwanted texture or seeds floating around for no reason.

Due to their size, they can easily be missed out during any food processing, and you may find them floating around your liquid if you were to make a pepper or hot sauce, for instance.

Removing the seeds results in a smoother sauce.

Why are my jalapenos not spicy? 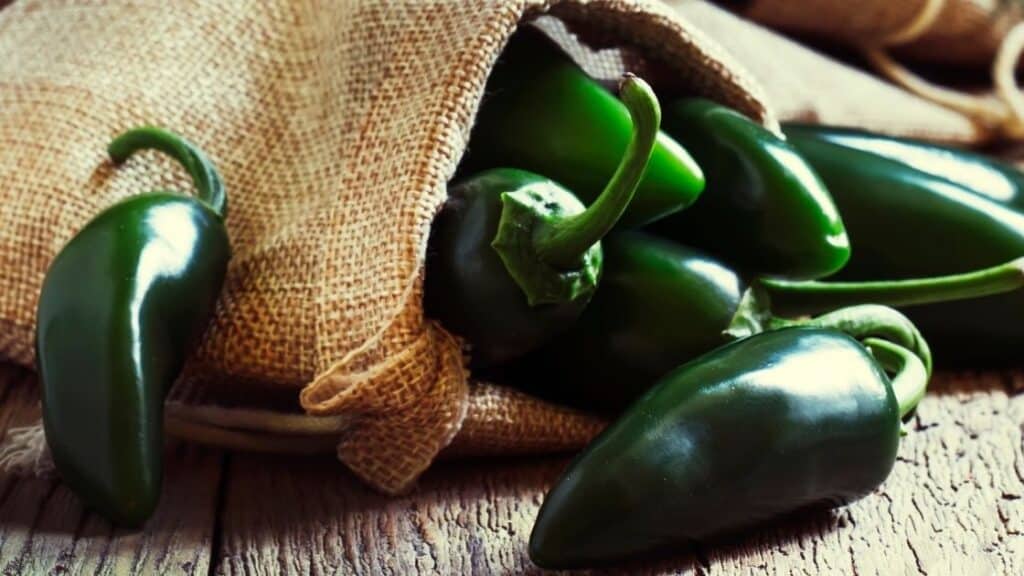 The spice of jalapeños depends on several factors including genetics, stress, and care of the plant.

Spicy levels can increase if the plant is stressed out as this causes them to produce more capsaicin.

The plant can be stressed out through extreme heat or reducing the amount of water it receives.

Some jalapeños are not spicy purely down to genetics.

Some may find however that when they are growing jalapeños, they do not turn out spicy.

If the plant is not looked after correctly, it will not develop a lot of spice.

The fertilizer needs to be correct in order to provide the right amount of energy for reproduction.

The heat of a certain plant can in fact be increased through the process of stressing out the plant.

There’s a clever metaphor for stressed-out humans in there somewhere.

Whilst the plant is fruiting, it should be stressed out to its maximum potential.

This activates its natural reactive protective measures, which produces greater capsaicin as a form of self-defense.

These stress measures include allowing the soil to get dry, so try to reduce the amount of water the plant receives.

Avoid over-watering and ensure the plant is exposed to high temperatures.

To check and see if the stressing has worked, see if there are lines on the pepper.

These lines may be white or appear similar to stretch marks, they give an indication of the amount of stress the plant has experienced.

Picking the peppers at the right time is important, although they can be harvested at any time.

For peak heat, it is best to pick them when they are fully ripe.

Which color bell pepper is the healthiest? 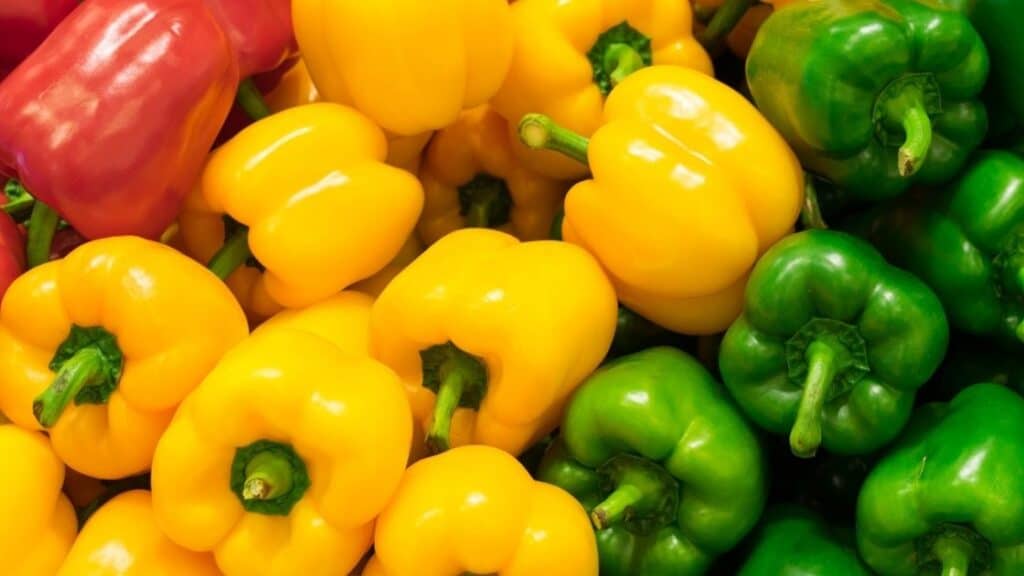 Red peppers are the healthiest as they have been on the vine longest.

The other bell peppers contain health benefits however the red pepper contains the most as it is picked last.

Bell peppers come in a variety of colors including yellow, green, red, and purple.

All of them provide excellent health benefits, most noticeably containing a high amount of both vitamins A and C.

Green peppers are harvested a little early, they are green because of this.

If harvested later they would have turned yellow, orange, and then red.

Beta carotene is converted into vitamin A, and the red bell pepper contains 63% of the daily recommended amount.

Green peppers contain only around 7%, and yellow peppers have 4%.

Vitamin a is important for eye health, it helps to protect and maintain the eye and vision.

It also supports the immune system as it can help to grow and spread T-cells, which are cells that protect against infection.

The right amount of vitamin C aids the body in creating and maintains collagen.

Collagen is important for maintaining the health of hair and skin. Vitamin C increases the absorption of iron which is a vital mineral.

Some animal studies have demonstrated that bell peppers can help with managing blood sugar levels.

Although the polyphenols contained in the peppers can in fact have a beneficial effect on blood sugar, so human studies will be needed in order to confirm this.

Although most people assume that the seeds of peppers are the source of the spice, it is in fact the white membrane part of the jalapeño pepper.

Because it coats the seeds, the capsaicin compound which is responsible for the spice often leeches onto the seeds which makes them appear spicy.

However, in and of themselves they are not spicy.

If you don’t want the spice, you will need to get rid of this pith but it will take the seeds with it as well.

Some jalapeños may not be spicy at all, this is due to various factors including genetics, weather, and stress levels.

One of the best ways to ensure jalapeños are spicy if you are growing your own is to ensure the jalapenos go through tons of stress.

This causes the peppers to release more capsaicin, as a form of self-defense.

If you don’t want to grow your own peppers, ensure the ones you purchase have been grown in a very hot climate.

The sun and heat are an important part of the amount of spice that exists in the jalapeños.

The healthiest bell pepper is the red pepper due to the fact that they are harvested last.

The other colored bell peppers are different colors due to the fact that they are picked at different stages of the harvesting process.

Because the red pepper is picked last, it has the most amount of nutritional benefits.

This includes high amounts of vitamins A and C.