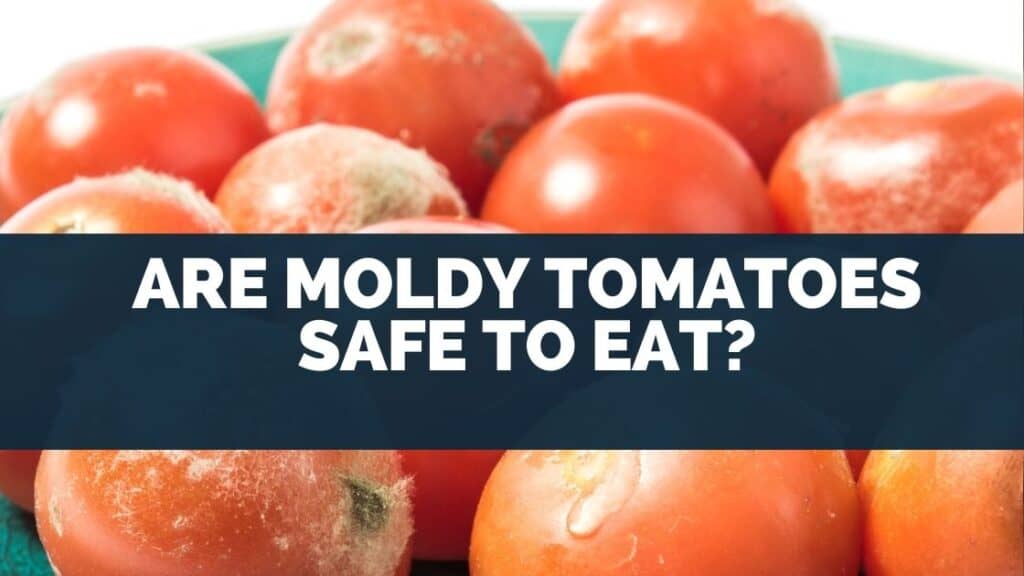 Mold often grows on food in spots and not the entire fruit, vegetable, or piece of food.

In the past, I’ve tended to cut away the moldy part and eat the rest, especially when it’s only a small part of the fruit or vegetable.

Today, I will look at whether it’s safe to eat moldy tomatoes.

If you accidentally consume some mold on tomatoes, you can be fine according to medical professionals.

But, you should never consume moldy foods including tomatoes as there is a risk of getting very sick.

Because the mold can be limited only to a part of tomatoes, like me you may think it’s a good idea to just trim off the moldy part and eat the rest.

Having done so in the past I also wondered how safe it is.

So, below I will explain what I found based on my research about whether it’s safe to do so if you can eat a tomato that has mold on the stem.

As well as, if it’s safe to eat fruits and vegetables from a package where one or more of the fruits or vegetables are moldy but the rest are fine.

Go to top
Table Of Contents hide
1 Is It Safe to Cut Mold off Tomatoes?
1.1 It’s safe to cut away mold on hard foods but not soft foods like tomatoes?
2 Can You Eat a Tomato with Mold on the Stem?
3 If One Cherry Tomatoe Is Moldy Are the Rest Bad?

Is It Safe to Cut Mold off Tomatoes? 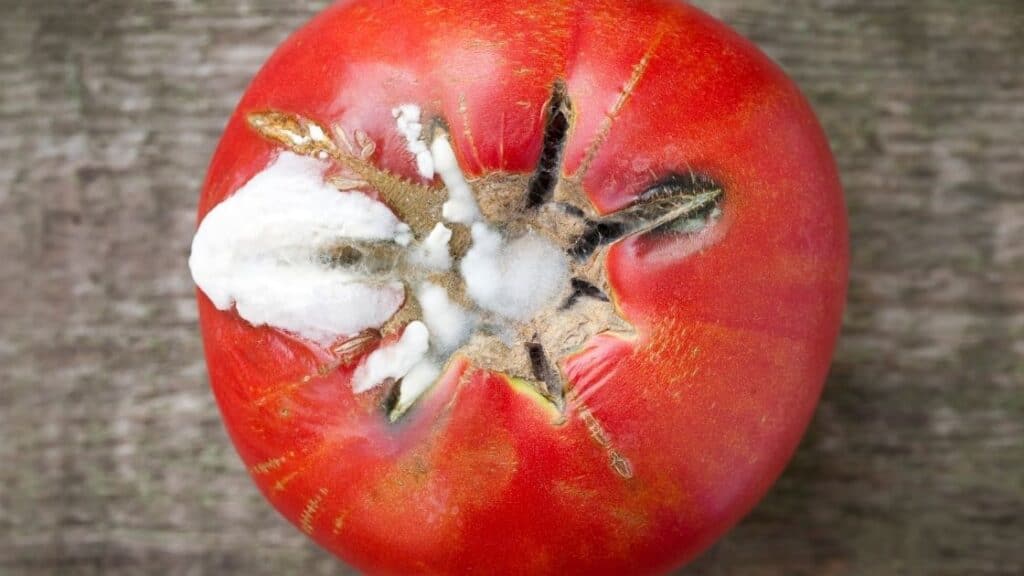 Mold can affect the whole tomato all at once, but other times it can be localized to only a small part.

As you may know, mold is a microscopic plant that puts roots into the flesh and draws nutrients out of the tomato.

When this happens the area around the mold is generally affected but is it safe to cut the mold and affected area away and eat the rest of a tomato.

Overall, it’s unsafe to cut away the moldy parts of a tomato and consume the reset according to medical professionals.

Certain molds can be very toxic, and the risk of ingesting the mold is still quite high even if you cut away the affected areas.

Therefore, it’s best to throw it away.

To me, it seems a bit over top, especially when there can only be a very small spot of mold on the surface of the skin.

Also, when you cut away the affected area you can see the area that is discolored by the growth of the mold.

But, it makes sense to be on the safe side and not consume it.

Other medical professionals have stated that certain molds can be deadly because they produce mycotoxins which are very toxic.

And it’s difficult to know exactly what type of mold you’re dealing with without doing a chemical analysis or being an expert on identifying mold.

I did some research into how often people have a negative reaction to eating mold.

Although the data set was limited to only 10 people, the results showed that 40% of people got sick from eating food with mold on it.

Whereas, the remaining 60% didn’t have any adverse reaction.

I can also speak from my own experience and say that I have slightly moldy food, or cut out the moldy part of food and consumed the rest and I’ve never gotten sick.

I always thought that mold was healthy because there are many medicines that are made from mold such as penicillin.

But, after looking into the advice of medical professionals I don’t think I’ll be doing it anymore.

However, in my case, I may not have gotten sick because I didn’t think I would, which could have created a placebo-like effect.

It’s safe to cut away mold on hard foods but not soft foods like tomatoes?

Dr. Andrew Weil, a medical doctor (M.D.) has stated that based on his research it’s OK to cut away mold on hard foods such as blocks of cheese, and carrots.

The reason is that the risk of the mold going deep into the food is much less.

And the mold is generally limited to the small area where it’s growing.

He says that with hard foods cut away 1 inch (2.5 cm) around the mold.

And the rest is fine to consume.

But, with soft foods like bread, fruits, and soft vegetables like tomatoes here’s a video that shows why it’s not a good idea to only cut away the moldy part:

It also shows how mold grows.

The medical professionals at Cleveland Clinic also reiterate what Dr. Andrew Weil has said and say that cutting away the moldy part and consuming the non-moldy parts is only OK on hard vegetables such as cabbage.

They also say that mold makes its way onto food through the air.

Once it settles on the food it begins to grow.

They provide some ways to limit the chance that mold will grow on food these are:

A fridge or freezer can lose its temperature quite quickly in warm weather, and also exposes the interior to mold spores that can settle on the food.

So, it’s best to keep the fridge door closed as much as possible. Unless it absolutely needs to be open because you’re taking food in and out of it.

Such as on stray food fragments that are uncovered on the sides and back.

Or on the shelves of the fridge.

Keeping it in the fridge creates an inhospitable environment for mold, and stunts its growth.

The longer you leave it out uncovered the more likely it is for mold to settle on the food.

Canning foods is a great way to make foods last much longer.

And canned tomatoes are very easy to find in stores.

Can You Eat a Tomato with Mold on the Stem? 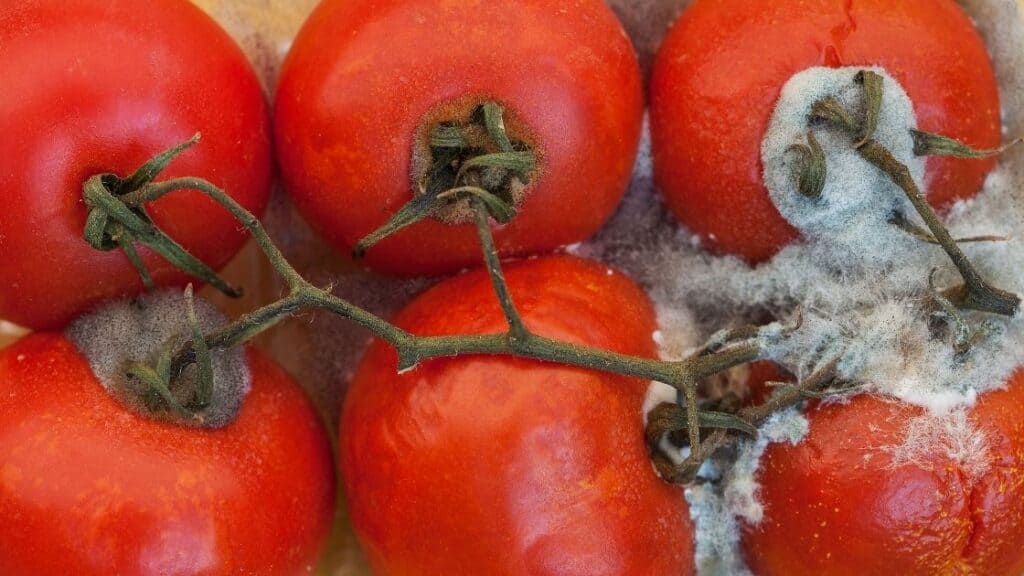 When you buy tomatoes you can get them with the stems still on them.

Or, you might grow your own tomatoes and notice mold growing on the stem before picking them.

So, is it safe to eat a tomato with mold on the stem?

It’s advised by medical professionals not to eat a tomato with mold on the stem.

You can be totally fine to eat but you can also get extremely sick.

Therefore, it’s best not to risk it, and throw away any tomatoes with mold on the stem.

It can seem like you’re wasting the tomatoes to do so, and that you’re being extremely cautious. And in reality, you are being quite cautious.

At the end of the day, it’s a judgment call on your part.

However, the facts show that there is a high chance you’ll get sick, and some molds are deadly.

Green tomatoes aren’t commonly found in stores, but they can be found at various restaurants where they’re fried and added to burgers or served as an appetizer.

Therefore, you may be wondering if you can eat them raw like a regular tomato.

I explained whether you can or not in this article about if it’s ok to eat green tomatoes raw.

If One Cherry Tomatoe Is Moldy Are the Rest Bad? 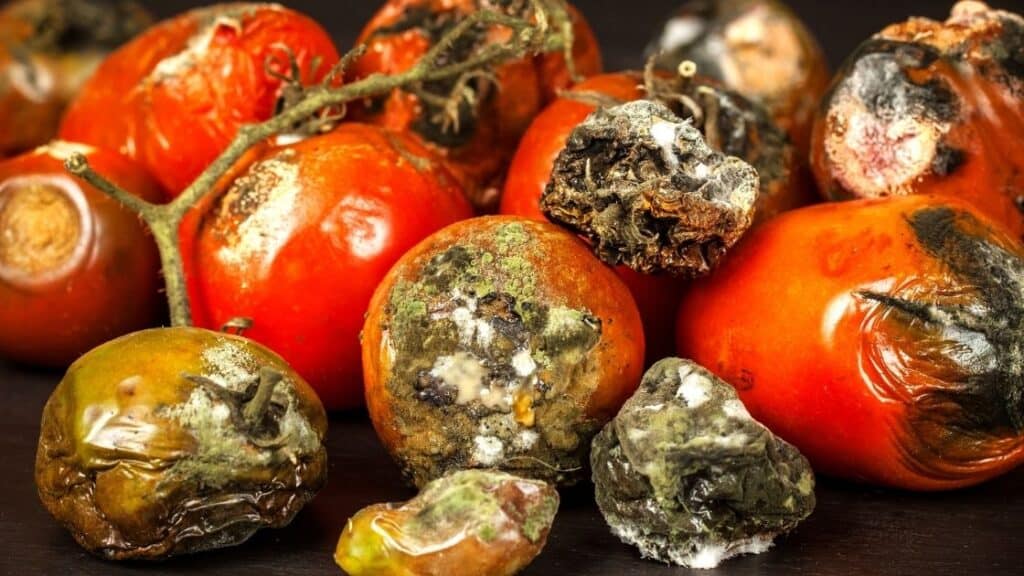 Mold can be limited to one or two fruits in a packet, or in a fruit bowl.

And the rest can appear unaffected at all by the mold and show no visible signs of mold.

But, is it ok to throw out the moldy ones, and keep the rest?

As a general rule, if one is moldy the rest are contaminated.

Mold grows in such a way that the visible mold is the last thing to develop as mold grows.

So, the chances are high mold is growing in all of the pieces of fruit although no mold is visible on the surface.

Because of that, it’s best to throw away all of the fruits when only one or two of them show visible signs of mold.

This brings another depth of meaning to the phrase “one bad apple spoils the bunch”.

I thought this generally meant over time all of the apples will go bad.

But, in the case of mold, it’s instant.