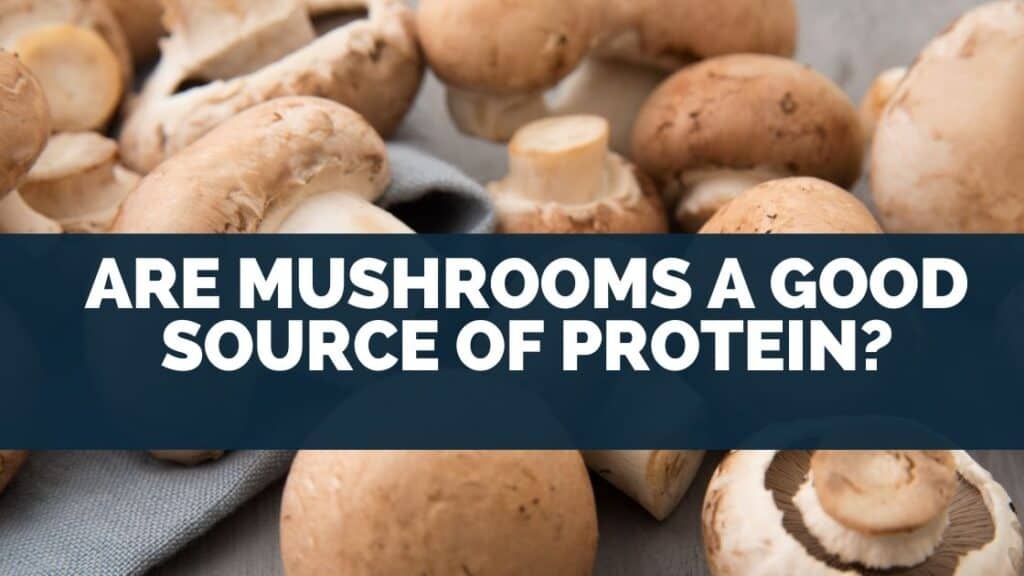 Yes, mushrooms are a good source of protein especially if you’re on a plant-based diet.

Despite their meaty taste, mushrooms only have around 4-7% percent of the recommended daily protein intake, per 100g of mushrooms.

Mushrooms contain much less protein than animal sources however when consumed as part of a healthy diet, they can be a good source of protein.

Other plant-based sources do contain more protein on a per weight basis however mushrooms are still a good choice especially because they are also low in fat, carbs, and have high amounts of vitamins and minerals.

Mushrooms can vary as can their protein content, the amount of protein contained in 100g of mushrooms is the same as other vegetables such as spinach or artichokes.

If you want to consume mushrooms for protein purposes, ensure you pick the right mushroom and check its protein content.

To consume enough protein, think about other protein sources you could pair it with.

Go to top
Table Of Contents hide
1 Which mushroom has most protein?
2 Can I replace meat with mushrooms?
3 Do mushrooms have more protein than meat?

Which mushroom has most protein? 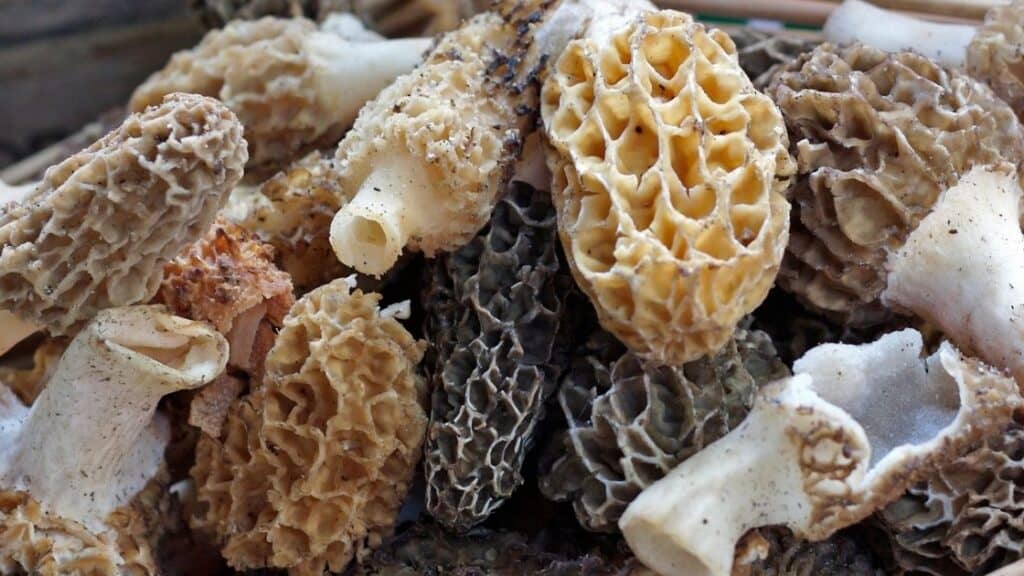 White, oyster portobello, and morel mushrooms have some of the highest levels of protein.

Mushrooms can vary slightly in protein content depending on the type of mushroom.

Many mushrooms are good sources of protein when compared on a calorie by calorie basis.

There are a couple of different ways to measure up the protein content, on a calorie basis and on a weight basis.

Fiber, folic acid, and B vitamins.

White mushrooms are also known as button mushrooms and are the most popular mushrooms grown and consumed around the world.

As well as containing protein, they also contain high amounts of minerals such as selenium and potassium.

Oyster mushrooms are named as such because their shape is similar to that of an oyster.

Portobello mushrooms are from the same family as white mushrooms and contain several nutrients such as folate and amino acids.

Portobello mushrooms have around 3.1g  of protein per 100, making them one of the highest protein mushrooms.

Morel mushrooms have around 3.1g of protein per 100g, these mushrooms are one of the mushroom types that have to be harvested in the wild, as they cannot be grown in a farm setting.

Morel mushrooms also have the highest amount of vitamin D out of the available edible mushrooms.

They also have decent amounts of phosphorus and calcium.

You’ll need to consume more of these mushrooms to get the same amount of protein as other mushrooms.

Enoki mushrooms also have a high amount of antioxidants, as well as large amounts of B vitamins.

Cremini mushrooms contain around 2.5g of protein, per 100g.

Cremini mushrooms are the same species as both white and portobello mushrooms.

The difference between these is when they are harvested, cremini mushrooms are harvested when they’re much younger than the others.

Shiitake mushrooms usually grow on the side of dead trees and are one of the most popular types of mushrooms that are consumed.

Although slightly lower in protein content, with around 2.3g of protein per 100g, they do contain several of the same amino acids found in meat.

Maitake mushrooms are actually considered to be a type of adaptogen, which helps restore balance in the body.

Maitake mushrooms are low-sodium and cholesterol-free but their protein content is much lower than other mushroom types at around 1.9g per 100g.

Their other benefits however may outweigh their fairly low protein content.

Can I replace meat with mushrooms? 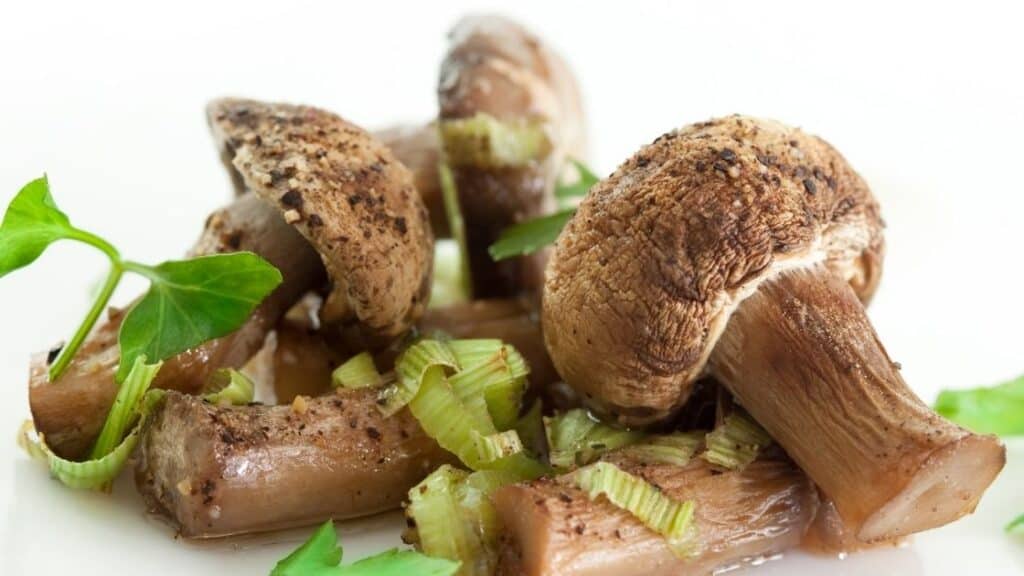 Yes, mushrooms can replace meat in some dishes as they are low in calories, carbs and have virtually no fat.

Mushrooms can be used as a substitute for their texture and flavor.

Mushrooms do not have nearly as much protein as meat does however as a plant-based food it does contain decent amounts of protein.

Mushrooms should not be relied on as a main source of protein as you’d need to consume large amounts to have adequate protein in your diet.

Alongside other sources of protein, mushrooms can be a great protein source but should not be relied on.

Alongside protein content, mushrooms are also a rich source of vitamins and minerals such as zinc, selenium, and B vitamins.

They also have antioxidants, and contain no fat, and are very low in carbs.

This makes it a great option for those with a low-fat, low-carb, high-protein diet.

One of the reasons mushrooms are sometimes used as a meat substitute is not necessarily its meat-like taste but because of its flavoring.

Mushrooms have a flavor called umami, which provides a rich flavor and texture that makes them a good substitute.

Mushrooms are much lower in calories than meat, which makes them a healthy substitute.

In dishes that call for meat, you can substitute around a quarter to a half of the meat with mushrooms, this will preserve the right texture and flavor whilst also lowering the calories, carbs and fat of the dish itself.

If mushrooms are used as a substitute for meat, they’ll provide tons of benefits, however, you will need another protein source to get adequate protein.

If you want to stay plant-based, other good sources of protein include black beans, tempeh, and lentils.

Do mushrooms have more protein than meat? 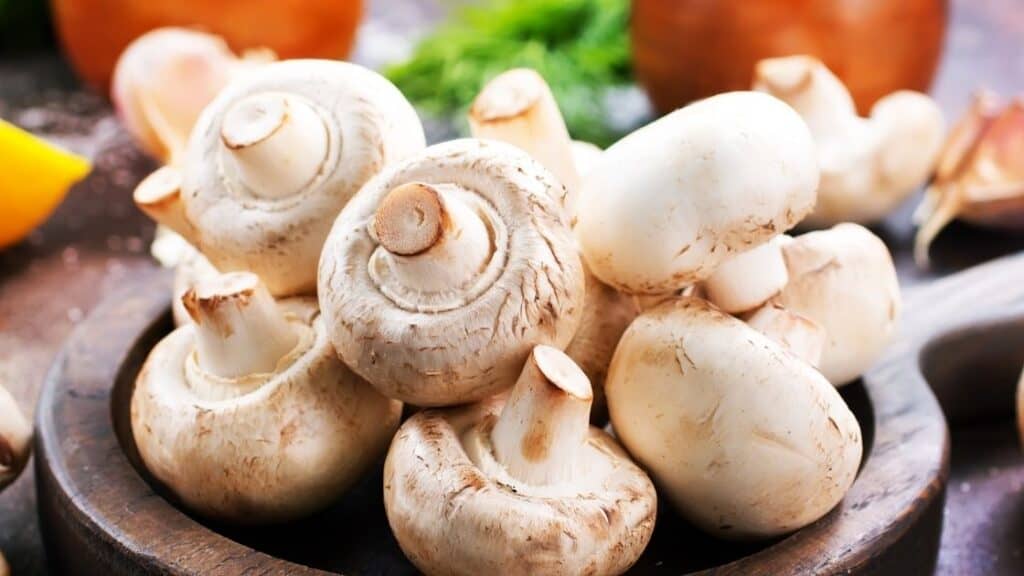 No, mushrooms do not have more protein than meat.

Even high-protein mushrooms contain much less protein than meat.

Despite their meaty flavor, mushrooms don’t have enough protein to match up to the protein found in meat.

Although mushrooms are low in carbs and fat and high in protein, vitamins, and minerals, their protein content does not touch that of meat sources.

Some mushrooms contain similar nutrients found in meat sources, such as iron, vitamin D, and vitamin B12.

Duck, one of the lowest protein meat sources, has 37% of the recommended daily amount of protein.

It would be very difficult to get all of your protein intakes from mushrooms as you would need to consume a very large amount.

There’s a large variation between nutrient profiles of mushrooms, for example, Morel mushrooms have around 68% of the recommended daily intake of iron whereas portobello mushrooms only contain 2%.

Some other plant-based sources have higher amounts of protein and could be paired with mushrooms in order to receive adequate daily protein.

Black beans have around 18% of the recommended daily protein, tempeh has around 41%.