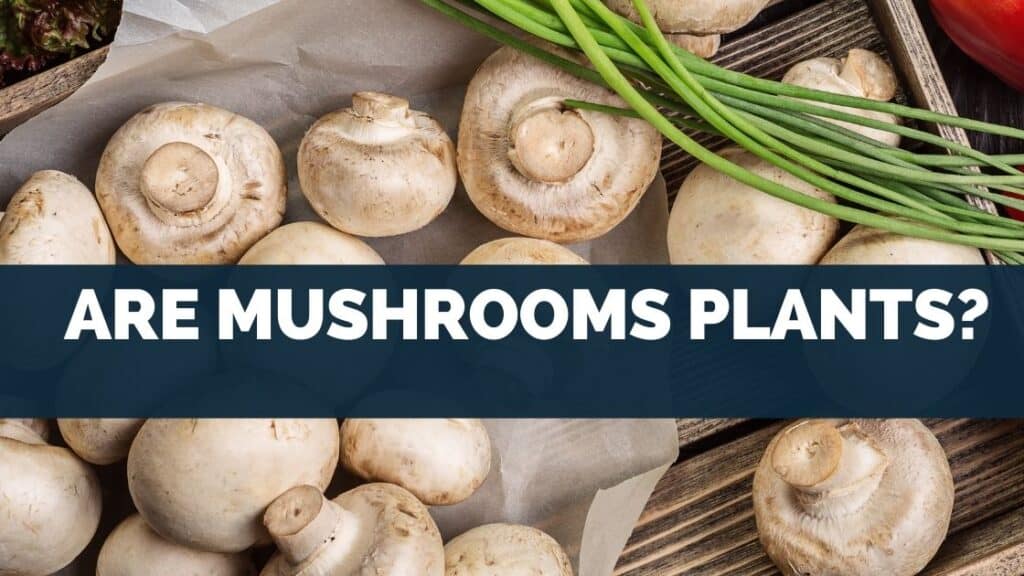 Mushrooms and other types of fungi are ubiquitous on our planet and have a long evolutionary history, but we are just beginning to understand them.

It is estimated that out of the 150,000 types of fungi that produce mushrooms, we have only actually identified 14,000 — meaning that over 90% of the mushroom-forming fungi on earth have yet to be discovered.

Mushrooms are not plants — they are classified as fungi.

Fungi evolved earlier than plants, and plants and fungi have a symbiotic, mutually beneficial relationship.

While plants provide nutrients for the fungi, the fungi help produce healthy soil in which the plants can grow.

Go to top
Table Of Contents show
1 Is a mushroom a fungus?
2 Why don’t mushrooms have green leaves?
3 Are fungi closer to animals or plants?
4 How are fungi similar to animals?
5 Are mushrooms insects?

Is a mushroom a fungus? 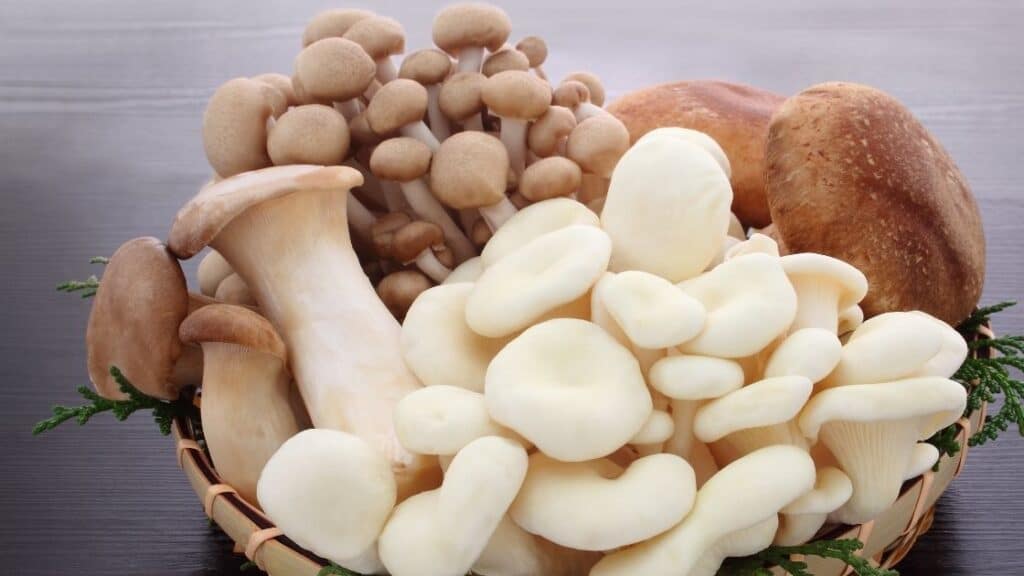 Yes, a mushroom is a fungus. Technically, mushrooms are the visible fruiting bodies of the underground root system of the fungus (the mycelium).

The mycelium is ever-present and usually covers vast underground distances, but the mushroom fruiting body is usually only visible above ground for a relatively short time.

The mycelium is composed of a sprawling, interconnected network of threads, which are called hyphae.

Some mycelia are microscopically small, and some can grow to be thousands of acres large.

Mushrooms are the fruiting bodies produced by the mycelium. Not all mycelia produce mushrooms, but all mushrooms come from mycelia.

Like plants, mycelia produce mushrooms in order to propagate themselves.

Mushrooms attract animals (including humans!), and when they are disturbed, release spores (which are akin to seeds in plants).

Once the spores are liberated, they can be carried to another location via air or water currents, where they can germinate and create new mycelia.

Why don’t mushrooms have green leaves? 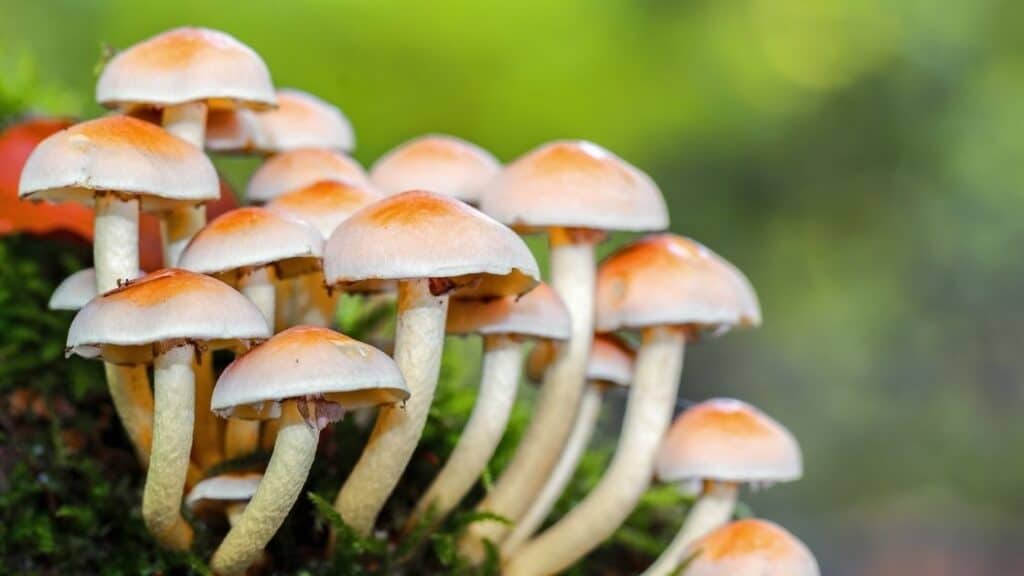 Mushrooms do not have green leaves because they are not plants.

While plants have chlorophyll, which makes their leaves appear green, fungi do not contain chlorophyll.

As this article explains, plants contain a greenish pigment called chlorophyll, which enables them to absorb light from the sun and convert it to stored energy in the plant.

This stored energy, in turn, is used by the plant to take carbon dioxide and water from the surrounding air and convert it to glucose.

Glucose is then used by the plant (along with nutrients absorbed from the soil) to grow new plant parts.

The whole process ends up releasing oxygen back into the air.

This process is known as photosynthesis (photo=light; synthesis=to put together).

The ability to perform photosynthesis is one of the major characteristics distinguishing plants from other organisms, including mushrooms.

Plants are autotrophs, meaning that they are capable of making their own food out of sunlight via photosynthesis (auto=self, troph=feeding).

This means that they must derive their nutrition from other living organisms and cannot produce their own food.

So where do mushrooms get their nutrition from?

This is one of the most interesting characteristics of mushrooms and other fungi.

They are saprophytes, which means that they feed on decaying organic matter (rotting wood, plants, and even other animals).

They do this by secreting certain enzymes that break the complex cellular structures of the organic matter into simpler molecules — a kind of pre-digestion that makes absorbing the nutrients much easier for the fungi.

This fact makes mushrooms and other fungi extremely important for the health of our world.

They are “the grand disassemblers of nature,” as mushroom expert Paul Stamets puts it.

They decompose decaying matter and then recycle it to feed plants, transforming a forest or wooded area into what is effectively a massive compost pile.

They can also break down potentially harmful substances; some have even shown the potential to break down and neutralize nerve gas agents and plastics.

Are fungi closer to animals or plants? 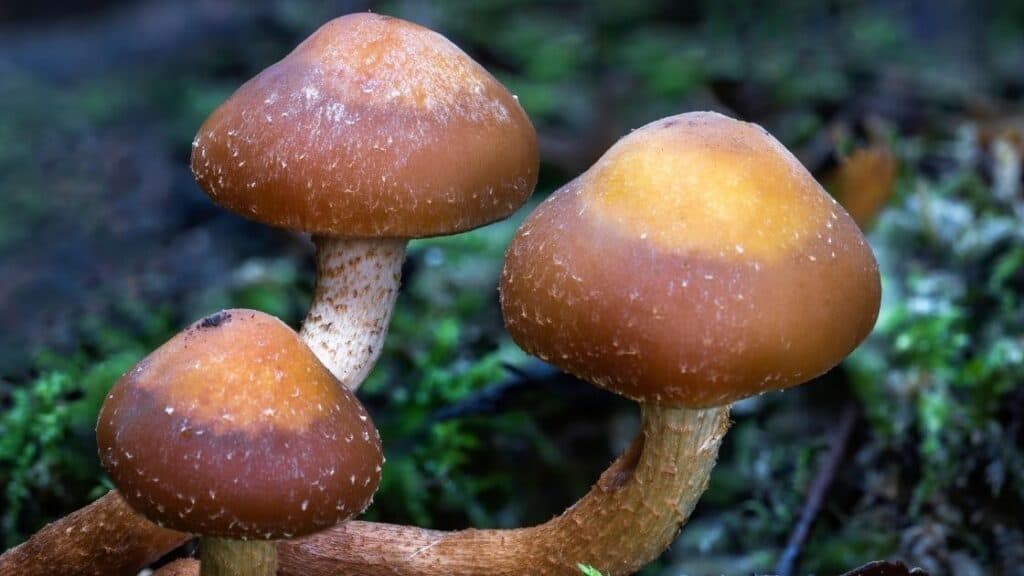 Recent discoveries indicate that fungi are more closely related to animals than they are to plants.

Animals and fungi have a common evolutionary ancestor that branched off from plants about 1.1 billion years ago.

Animals and fungi didn’t split off on the evolutionary tree until later.

It’s an honest mistake that many people make to conflate mushrooms with plants.

Mushrooms do visually appear more similar to plants than to animals.

However, as scientific understanding advanced, it became evident that mushrooms actually belong to their own kingdom of living organisms, and are totally distinct from the plant kingdom.

As stated above, animals and fungi share a common evolutionary ancestor—an organism that split away from plants about 1.1 billion years ago.

Sometime later, animals and fungi diverged in their evolutionary paths as well.

“About 600 million years ago, the branch of fungi leading to animals evolved to capture nutrients by surrounding their food with cellular sacs — essentially primitive stomachs.

As these organisms evolved, they developed outer layers of cells — skins, basically — to prevent moisture loss and as a barrier against infection. Their stomachs were confined within the skin.

These were the earliest animals.

“Mycelia [fungi] took a different evolutionary path, going underground and forming a network of interwoven chains of cells, a vast food web upon which life flourished.

These fungi paved the way for plants and animals.

They munched rocks, producing enzymes and acids that could pull out calcium, magnesium, iron, and other minerals.

In the process, they converted rocks into usable foods for other species.”

Stamets’ explanation above describes one of the main ways in which animals and fungi took divergent paths during the course of their evolution.

While animals developed a stomach that is encased inside their bodies, mushrooms continued to essentially pre-digest their food by secreting enzymes prior to absorbing it.

Also, note Stamets’ remarkable statement that mushrooms (actually their mycelia — a network of root-like threads that grows underground and from which grow the mushrooms) can “munch rocks!”

The ability that fungi have to break down a tremendous variety of different organic matter is what makes them so interesting, and so indispensable.

How are fungi similar to animals? 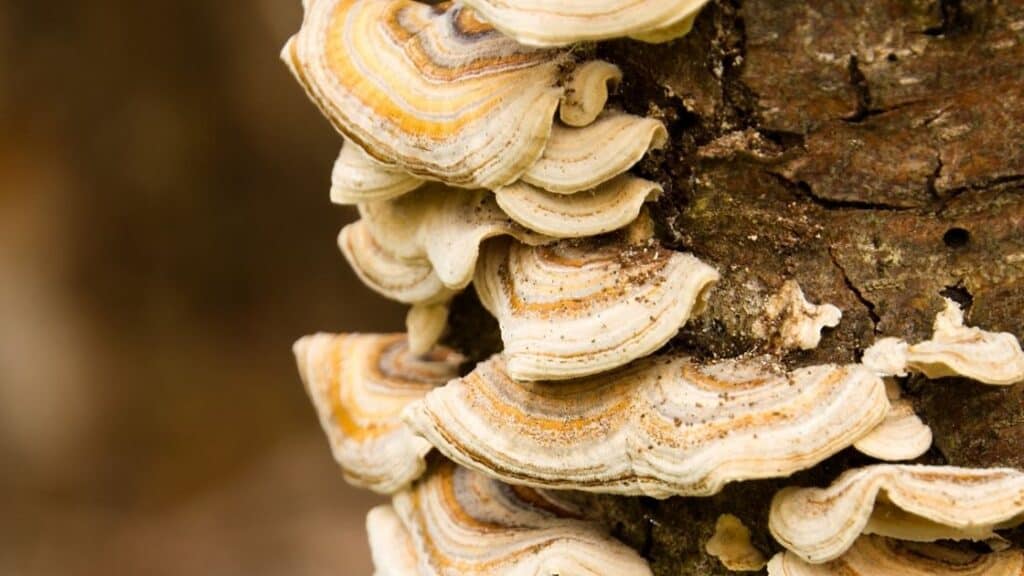 Fungi are similar to animals in multiple ways.

For example, both fungi and animals inhale oxygen and exhale carbon dioxide.

Both fungi and animals get their food from consuming other organisms (unlike plants, which make their own food from solar energy).

Animals and fungi also have similarities in their DNA that are not shared with plants.

In the preceding paragraph, we saw a crucial distinction between animals and fungi—the location of their stomachs and the nature of their feeding mechanisms.

However, animals and fungi actually share a lot of similarities as well.

Both fungi and animals are heterotrophs — they obtain their food by feeding on other living organisms.

They have some similarities in DNA, which is to be expected because of their shared evolutionary heritage.

Both fungi and animals inhale oxygen from the air and exhale carbon dioxide.

These are the more obvious, surface-level similarities.

Again, however, Paul Stamets contributes something unique to the discussion.

He describes some similarities between humans and mushrooms that are mind-bending.

First of all, Stamets says that humans evolved from fungi; while we “took an overground route,” fungi went underground and developed a vast, sprawling network — the mycelium.

The mycelium is somewhat analogous to the root system of trees, while mushrooms are the fruiting bodies of the mycelium.

The mycelium, Stamets says, can actually be thousands of acres in size.

Mycelia are ever-present beneath our feet, even in urban gardens.

In fact, the largest organism on earth is a mycelium in Eastern Oregon that is 2,200 acres large, and over 2,000 years old.

The mycelium actually has a quite sophisticated system of biochemical communication, akin to a human brain.

Stamets describes the mycelium as a “neurological network”, and contends that they are sentient and highly evolved.

This allows it to exist in a mutually beneficial, symbiotic relationship with the plants around it. 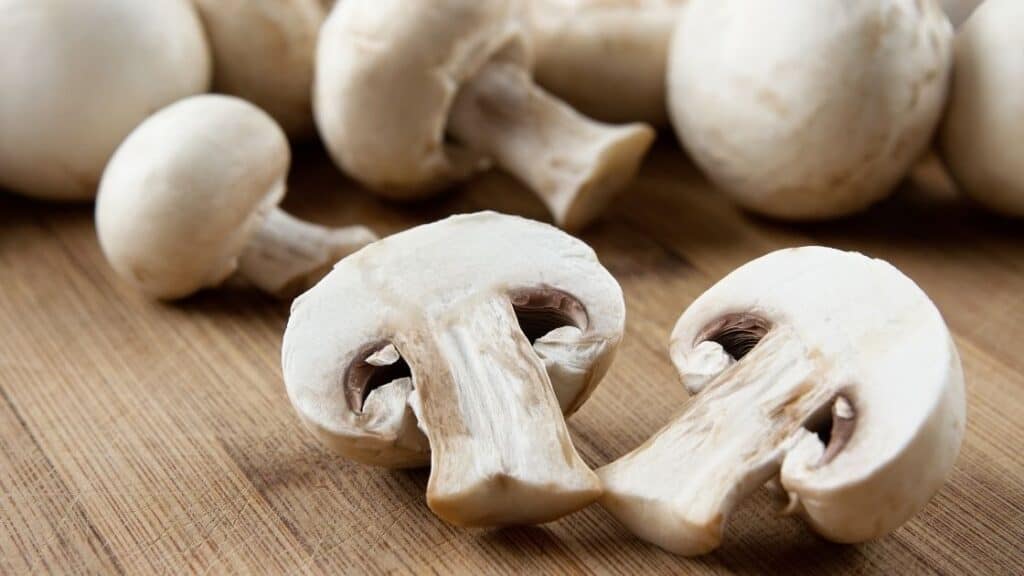 No, mushrooms are the fruiting bodies of certain types of fungi.

Insects are in the animal kingdom.

While mushrooms and insects are distantly related from an evolutionary perspective, they have evolved to be fundamentally distinct from one another.

While fungi and insects are biologically distinct from one another, they have also evolved to exist in symbiotic relationships with one another.

This makes sense, as Stamets explains:

“We know from the fossil record that evolution on this planet has largely been steered by two cataclysmic asteroid impacts.

The first was 250 million years ago.

The earth became shrouded in dust.

Sunlight was cut off, and in the darkness, massive plant communities died.

More than 90 percent of species disappeared.

And fungi inherited the earth. Organisms that paired with fungi through natural selection were rewarded.”

Because fungi can thrive without ample sunlight, Stamets argues, organisms that learned how to form mutually beneficial partnerships with fungi were more likely to survive the cataclysmic asteroid collision that affected the earth 250 million years ago.

Through the process of evolution by natural selection, species that learned to partner with fungi through a process of give and take were rewarded.

Many insects have formed just such partnerships with fungi.

There are many insects that use mushrooms as shelter and protection from predators and harmful pathogens.

In turn, the mushroom and mycelium benefit by using the insect to disseminate its spores and create new mycelium.

The fungus can also benefit by using insects to obtain nutrition.

An example of this type of partnership between insects and fungus is found in Central and South America.

This paper explains that there is a species of ants found in Central and South America which actually creates fungus farms.

First, they cut sections of leaves from various plants and use them to create a garden.

Fungi grow in these gardens as well, and they partner with the “farmer ants” to break down the cellulose in the leaves.

The fungi break this cellulose down into smaller sugar molecules that the ants can utilize (the ants then feed on the fungus itself!).

The ants, like good farmers, protect their “gardens” from other species of fungus that would compete with the species with which they are in partnership.

Thus, the fungi benefit from the partnership as well.

Mushrooms are fascinating, and they only become more intriguing the more we learn about them.

They also hold much promise for making this world a better place.

To learn more about the vast potential of fungi, check out this Ted Talk given by Paul Stamets in 2008.