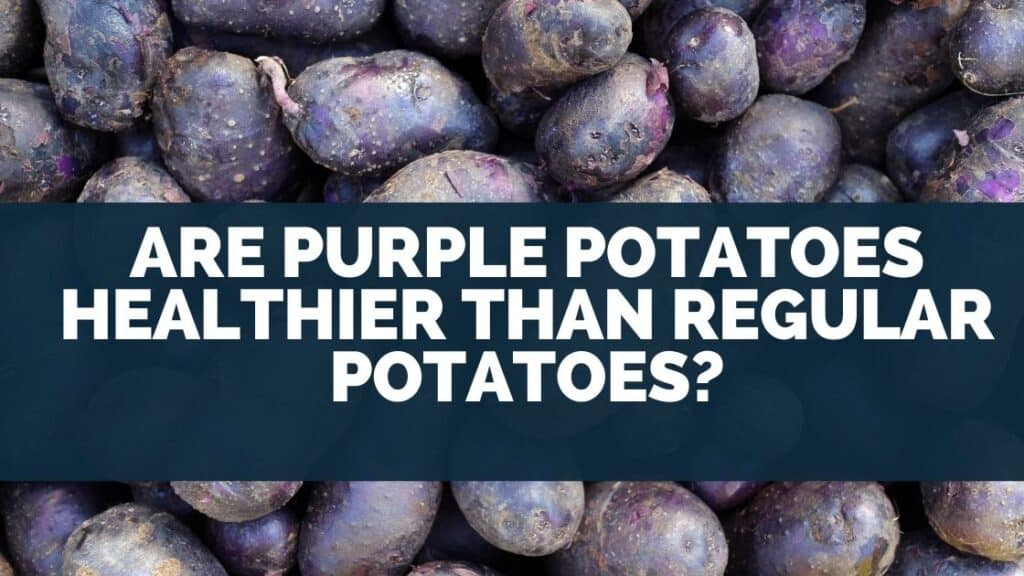 Purple potatoes are a root vegetable that belongs to the nightshade, or Solanaceae family, together with other vegetables like eggplants, tomatoes, and peppers.

Purple potatoes are healthier compared to regular potatoes because they have a lower glycemic index (GI).

The purple potato has a long, interesting history, dating back to the 18th century in Paris.

It was then known as the purple Peruvian heirloom fingerling potato.

Purple potato is also called a purple majesty, purple Viking, or a Peruvian.

They are harvested all year round and can be found in most climates.

Purple potatoes, often referred to as “Peruvian” or “Bolivian”, are golf ball-sized potatoes originating from Peru or Bolivia (surprise!).

Crunchy and nutty, they make an excellent addition to many main dishes.

While all potatoes contain high amounts of carbohydrates, fiber, and other vitamins and minerals, purple potatoes also contain high levels of anthocyanins and beta carotene, both powerful antioxidants.

Antioxidants play an essential role in balancing out free radicals, preventing the damage to cells done by oxidative stress.

Potatoes are an excellent nutritious addition to any diet, providing a host of vitamins and minerals.

They can be boiled, roasted, or mashed and used in various dishes, in addition to being made into french fries.

Are purple potatoes as healthy as sweet potatoes? 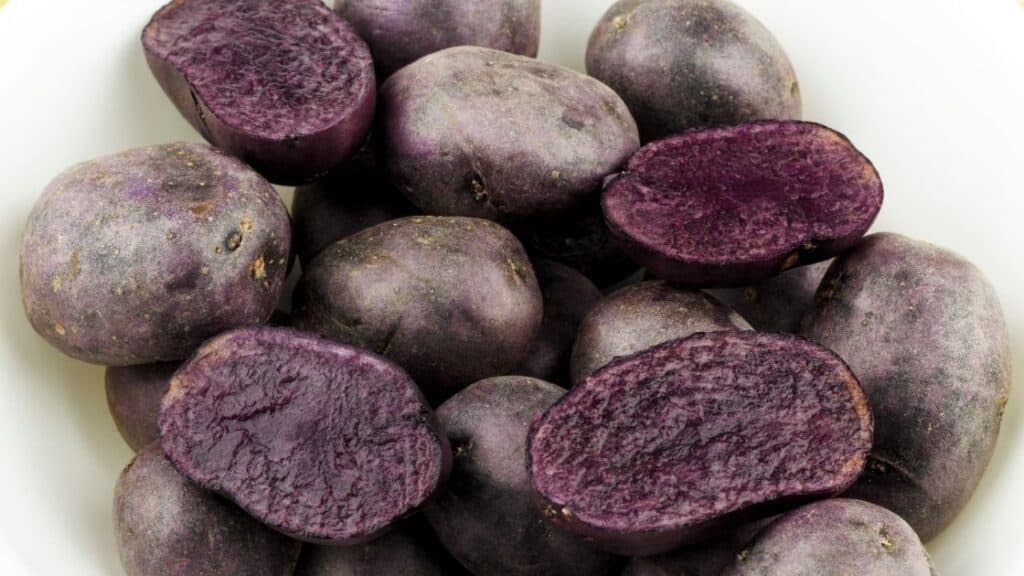 Yes, purple potatoes are more nutritious than their sweet counterparts because of their increased amount of antioxidants and reduced glycemic index.

They also have a lower carbohydrate content, which makes them easier to digest for many people.

Anthocyanins are colored pigments belonging to the phenolic group, responsible for the colors red, purple, and blue.

Beta carotene is the red or orange pigments found in fruits and veggies.

Carrots, squash, and sweet potatoes are excellent sources of this potent antioxidant.

Purple potatoes have a multitude of health benefits, including:

Purple potatoes are loaded with antioxidants that are great for the heart.

A recent study showed that they could help lower blood pressure, reduce the risk of hypertension and prevent heart disease.

The anthocyanins and beta carotene are integral in fighting free radicals in the body.

Too many unstable free radicals results in a condition called oxidative stress.

Purple potatoes have been shown in some studies to reduce cancer risk, slowing cancer cell growth by 83%.

Another research revealed that purple potatoes have proven effective when targeting and suppressing bladder cancer cells.

This could be a promising addition to an arsenal of potential treatments.

While not widely known as an anti-cancer food, the powerful antioxidants found in purple and sweet potatoes have shown promising signs of preventing and slowing down the development of cancer cells.

A 2015 study found that consuming purple potatoes can help to reduce inflammation.

Numerous studies have examined the effects of these compounds on the organs.

In particular, the liver and kidneys seem to reap the most benefit.

A recent study looks into how purple potato extract impacts inflammation that can happen after a large meal high in carbohydrates.

17 healthy men participated in the trial and were split into three groups; the control group (placebo), low-dose (3g/day), and high-dose (9g/day).

After just four hours, the men in the high-dose group showed improved digestion and lower levels of post-meal inflammation.

Purple potatoes are rich in the antioxidants anthocyanins and beta carotene, helping reduce the risk of several chronic diseases.

The level of antioxidants in purple potatoes is similar to that of Brussels sprouts or spinach, averaging 16 to 57 mg per 100 grams.

Having a higher intake of anthocyanins is linked to several benefits, including healthier cholesterol levels, improved vision and eye health, a lower risk of heart disease, certain cancers, and diabetes.

While the recommended daily intake of fiber is 25 to 30 grams for adults, the average fiber intake of an adult American is way less at 15 grams.

When eating potatoes, consider leaving the skin on.

About half the fiber in a whole potato comes from the skin.

Purple potatoes are rich in resistant starch that our bodies cannot digest.

The food then moves through your intestinal tract and finds itself in the colon, where your gut bacteria live.

These gut bacteria are responsible for maintaining a healthy digestive system, promoting good bowel movements, and defending the body against the invasion of harmful bacteria. 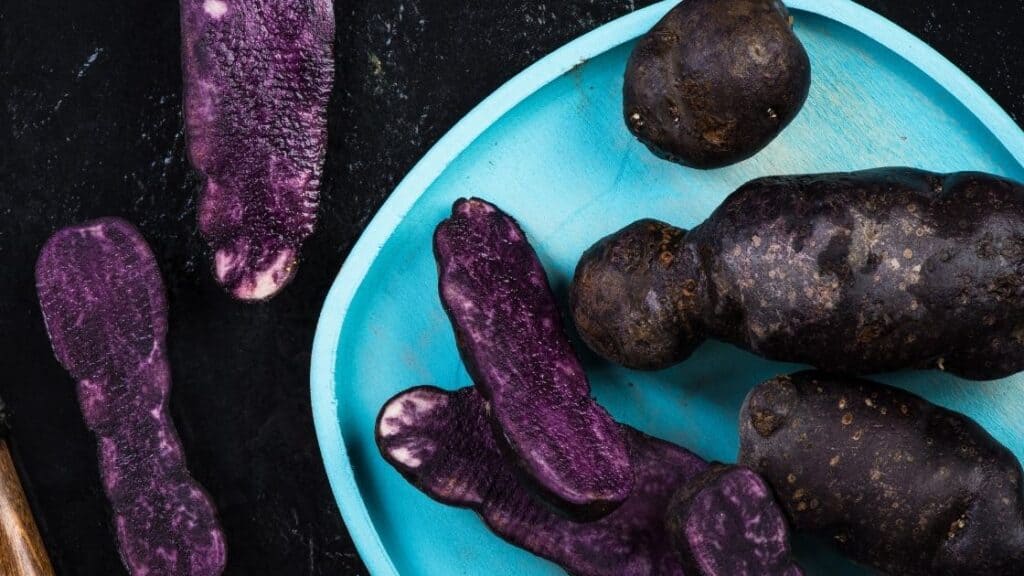 Purple potatoes are a healthy food, providing a host of nutrients such as carbohydrates, fiber, potassium, phosphorus, and magnesium.

The nutritional content of 100g of purple potatoes are:

Purple potatoes are commonly eaten on the Japanese island of Okinawa, a blue zone home to an exceptionally healthy elderly population, with a large number of centurions and a low rate of dementia.

Some scientists credit their longevity to the consumption of purple sweet potatoes contributing to their physical and mental health.

Most of the energy in the traditional diet comes from the calories in the sweet potato.

An American study of 2279 Okinawans in 1949 showed that 69% of all their food was sweet potatoes.

They consumed little to no processed food.

How many calories are in a purple potato? 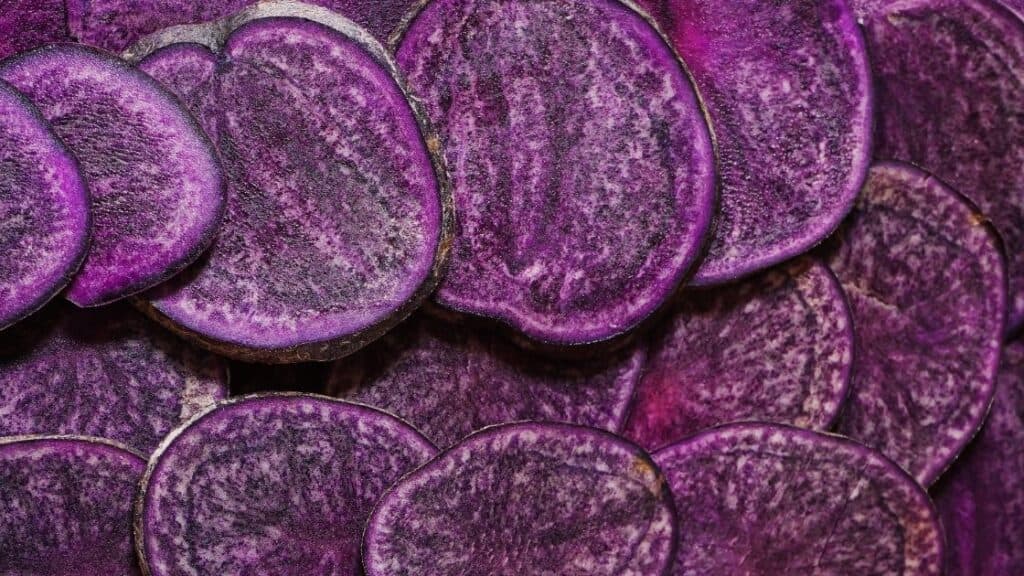 How many calories are in a purple potato varies significantly depending on how they are cooked.

Boiling and steaming will have the least calories, then baking, and finally, frying.

Cooking oil adds a significant amount of calories, so boiled or steamed potatoes would suit anyone on a weight management diet.

In addition to having a modest calorie count, purple potatoes offer a host of health benefits.

They contain high levels of antioxidants that can combat free radicals and prevent chronic illnesses like heart disease and cancer.

They have a relatively low glycemic index (GI) and can be suitable for people with diabetes. 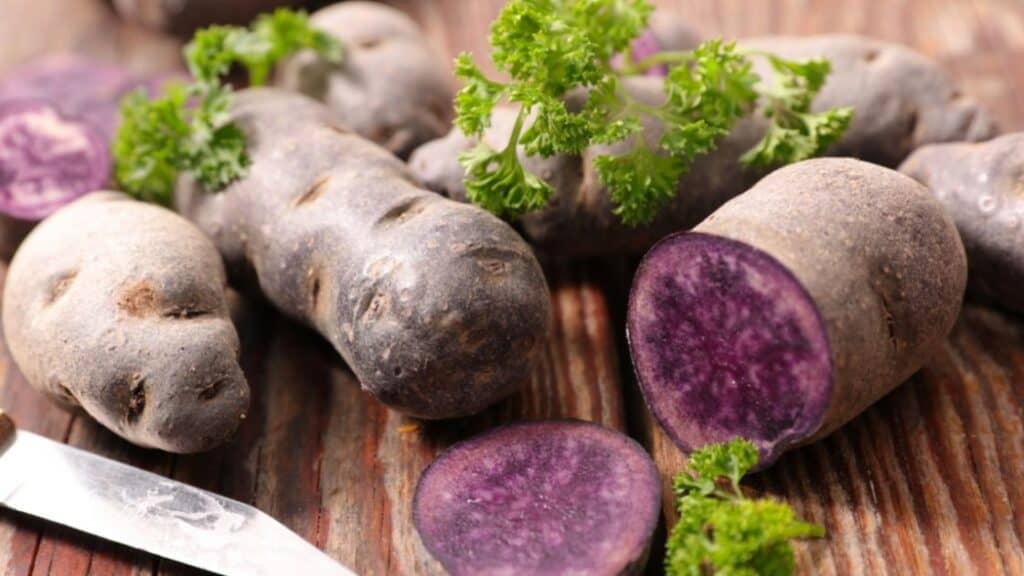 No. Purple potatoes have a modest calorie count, all of which comes from carbohydrates and not fat.

In addition, they are rich in fiber, which takes the body some time to digest, resulting in you feeling fuller for longer.

Like everything else, potatoes should be eaten in moderation.

A medium-sized purple potato has about 150 calories that come primarily from carbohydrates that your body converts into energy.

The sweetness is less intense than sweet potatoes with a drier, starchier flavor.

In a study published online by the Journal of Agricultural and Food Chemistry, it was found that when overweight people were given two servings of purple potatoes for a month, their blood pressure was reduced, and they didn’t gain any weight.

The study tracked 18 middle-aged adults, 14 of whom had high blood pressure and were currently on medication.

Seven participants were obese, while six were overweight.

Half were asked to eat purple potatoes with the skin for four weeks, while the control group did not.

Although the group that ate potatoes consumed more calories in the study period, they didn’t show any weight gain.

A quick, easy way of consuming them is microwaving them with the skins on to get the maximum amount of antioxidants and fiber.