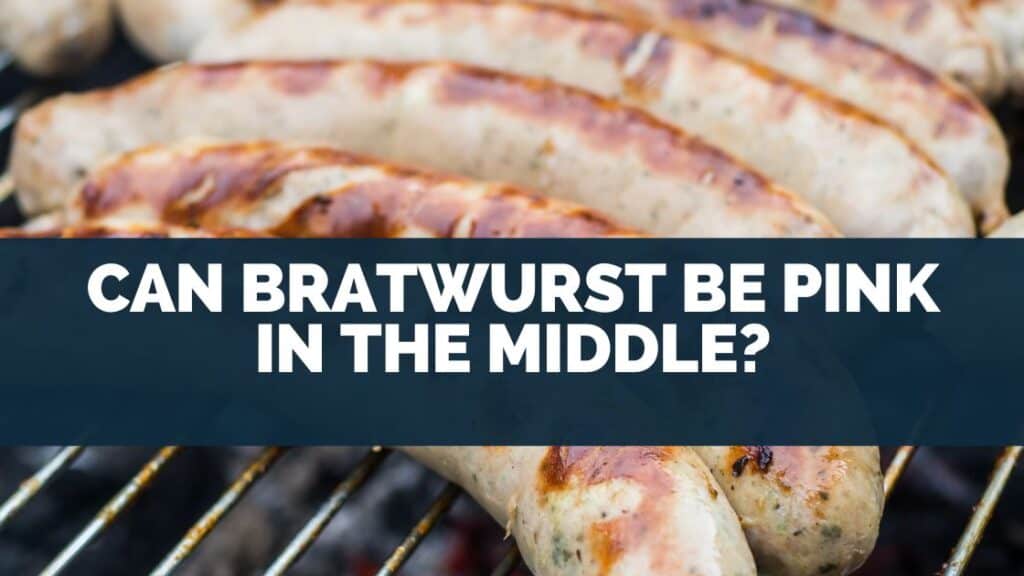 Bratwurst is a German sausage made from pork, beef, or veal.

You can find this delicious sausage in many cookouts!

However, when you cut into your bratwurst, you might notice a strange color.

What gives? Can bratwurst be pink in the middle?

There are many varying opinions on it, but the majority of cooks say that bratwurst is still safe to eat if it is slightly pink in the middle.

However, the sausage must have attained an internal temperature of 145 Fahrenheit for pork and 160 degrees for other meat products.

Bratwursts are a type of sausage that originated in Germany.

They are typically made from pork, although beef and veal can also be used.

Bratwursts are usually seasoned with salt, pepper, and other spices and can be grilled, roasted, or boiled.

When cooking bratwursts, it is important not to overcook them, as this will cause the meat to become dry and tough.

The best way to cook bratwursts is to grill them over medium heat until they are lightly browned and cooked.

Then, simply serve with your favorite sides and enjoy!

Go to top
Table Of Contents show
1 Is It OK If My Brat Is A Little Pink?
2 How Can You Tell If A Bratwurst Is Undercooked?
3 Can You Eat Undercooked Bratwurst?
4 What Should The Inside Of A Bratwurst Look Like?

Is It OK If My Brat Is A Little Pink? 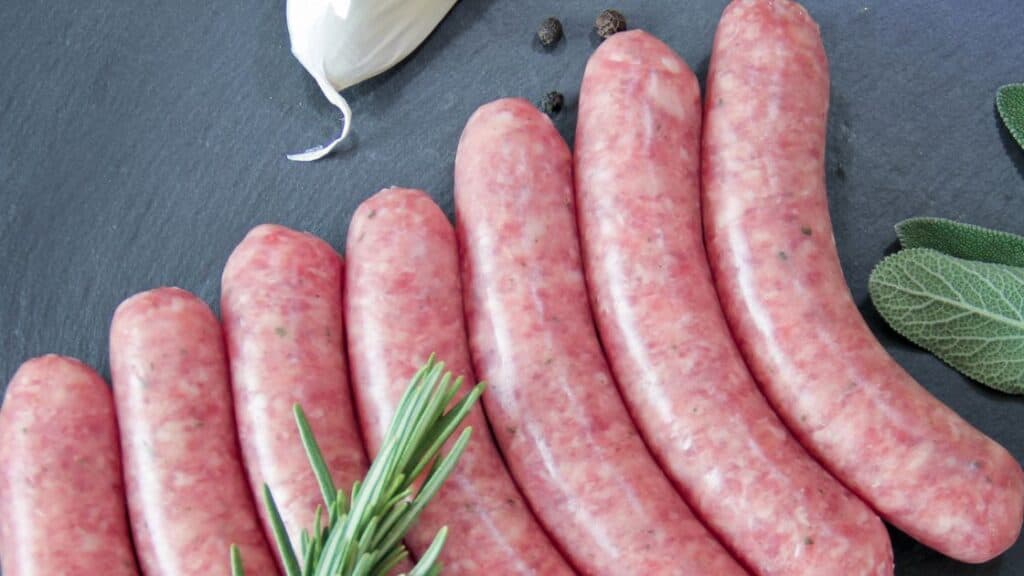 The USDA recommends that all pork products be cooked to an internal temperature of 145 Fahrenheit and beef and veal to 160 Fahrenheit.

Bratwursts are a great way to add flavor to any dish, and they’re also very versatile.

You can cook them in various ways and make them from almost any type of meat.

One of the most popular methods for cooking sausages is grilling.

Sausages can be grilled over direct heat or indirect heat, and they can be cooked whole or in slices.

If you’re grilling sausages over direct heat, turn them frequently, so they cook evenly on all sides.

For best results, cook sausages until they reach an internal temperature of 160 degrees Fahrenheit.

Another option for cooking sausages is baking.

Sausages can be baked in the oven or in a slow cooker.

When baking sausages, be sure to cook them until they reach an internal temperature of 160 degrees Fahrenheit.

Baste the sausages with a little bit of oil before cooking them in the oven or slow cooker.

This will help to keep them moist and prevent them from drying out during cooking.

How Can You Tell If A Bratwurst Is Undercooked? 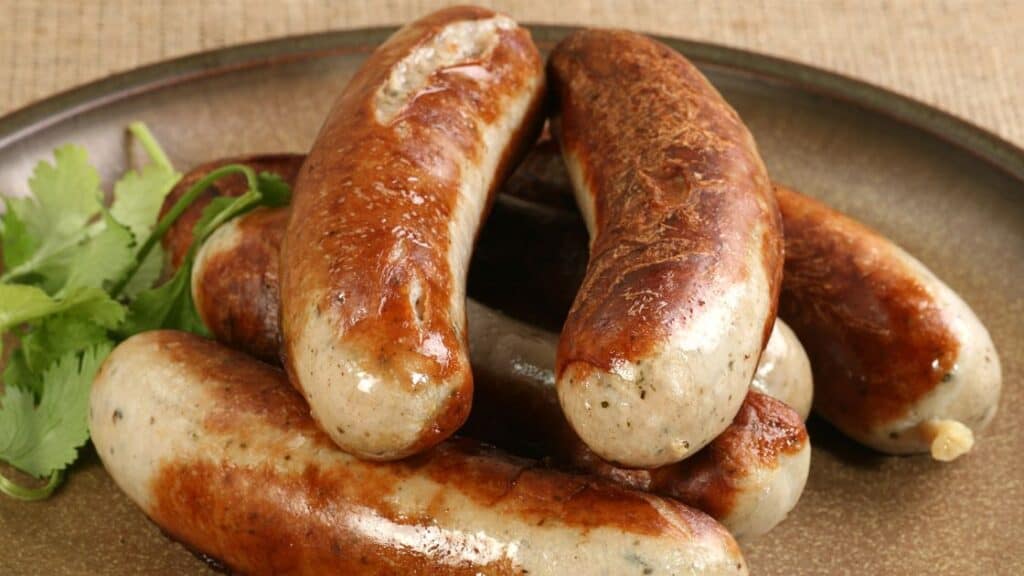 If you need to check on your bratwursts on the grill, give it a poke with a skewer or fork.

The sausage is done if the juice is clear, but if it is pink or bloody, the bratwurst is undercooked.

Also, once you’ve cut the bratwurst in half, the middle should be brown, not pink.

It could have used another few minutes on the grill if it is pink.

Bratwursts are a delicious and versatile type of sausage that can be cooked in a variety of ways.

One of the most popular methods is grilling them, which gives the brats a smoky flavor.

To grill bratwursts, simply preheat your grill to medium-high heat and then cook the sausages for about 10 minutes, flipping them occasionally.

Another great way to cook bratwursts is to simmer them in beer.

This helps to keep the sausages moist and also infuses them with flavor.

Simply place the brats in a pot of beer and bring it to a simmer.

Then cook for 10-12 minutes or until the sausages are cooked through.

Whether you grill or simmer them, bratwursts make a delicious addition to any meal.

Can You Eat Undercooked Bratwurst? 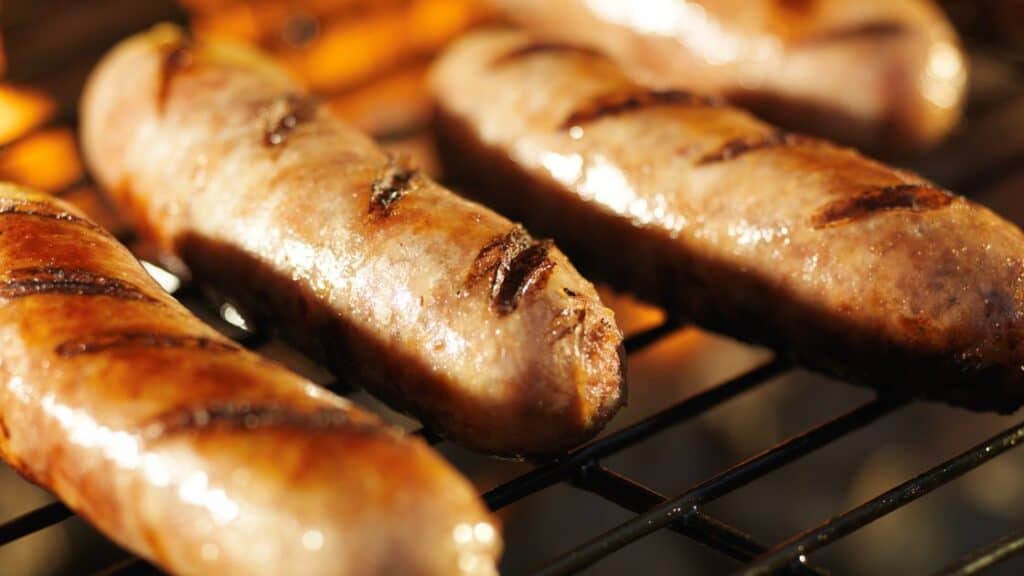 If you’ve eaten an undercooked bratwurst, there is a high chance that you will be fine.

However, there is still a possibility that you get food poisoning from eating undercooked pork.

Unlike a steak, pork must be cooked thoroughly to kill off bacteria.

Everyone has had food poisoning at some point in their lives.

It is never a fun experience.

Bad pork is one of the leading causes of food poisoning.

The symptoms include vomiting, diarrhea, abdominal pain, and fever.

Food poisoning from bad pork can be very serious and even life-threatening.

If you think you have food poisoning from an undercooked bratwurst, it is important to see a doctor or go to the emergency room right away.

Bratwursts are a type of German sausage that is typically made from pork or veal.

They are usually flavored with garlic, onions, and other spices and then grilled or roasted.

There are many ways of cooking sausages, but bratwursts are best served hot off the grill.

If you’re looking to cook up some delicious bratwursts, here’s what you need to do.

Then, lightly oil the grates.

Next, place the bratwursts on the grill and cook for about 10 minutes, flipping once halfway through.

Once they’re cooked, remove them from the grill and let them rest for a few minutes before serving.

Be sure that the bratwurst is done before digging in.

There are several different ways to tell if a bratwurst is cooked.

First, you can use a meat thermometer.

Stick it into the sauce’s center, be careful not to touch the grilling grate, and cook until it reaches an internal temperature of 160 degrees Fahrenheit.

Finally, you can also give the sausage a gentle squeeze.

If it feels firm to the touch, it’s ready to eat.

With any of these methods, it’s important not to overcook the sausage, as it will become dry and rubbery.

So keep an eye on your bratwurst, and enjoy when they reach perfection.

What Should The Inside Of A Bratwurst Look Like? 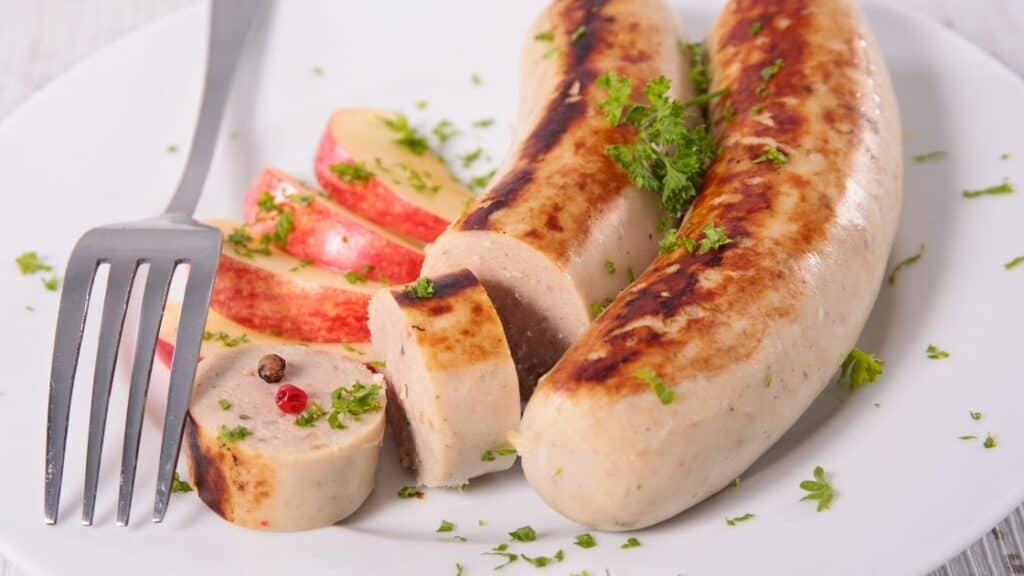 A bratwurst should be uniformly golden brown to be considered fully cooked.

A slightly pink middle might indicate that the bratwurst is slightly undercooked.

It is still considered safe to eat as long as the sausage is cooked to an internal temperature of 145 Fahrenheit for pork, and 160 Fahrenheit for beef and veal.

Few things are as synonymous with summertime as a juicy grilled bratwurst.

Originally from Germany, these pork sausages have become a beloved addition to cookouts and picnics around the world.

All you need to do is throw them on the grill for a few minutes to cook them through.

This makes them one of the easiest (and tastiest) options for summer entertaining.

So next time you plan a barbecue, don’t forget the bratwursts!