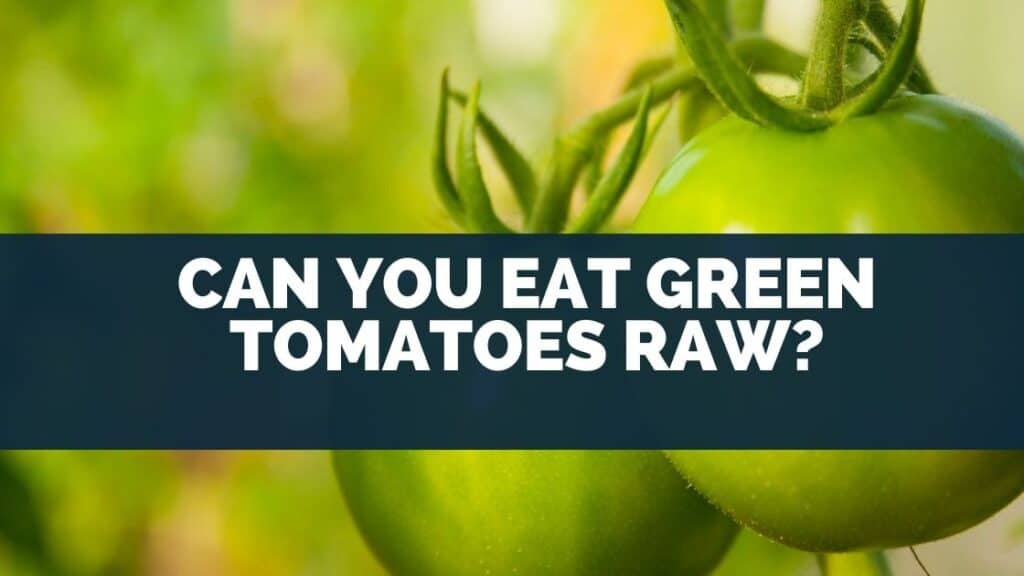 By the end of the tomato season, it’s common for some tomatoes do not ripen on the vine, and you can be left with some green tomatoes.

Some foods are toxic when eaten unripe or raw.

So, today I will explain whether you can eat green tomatoes raw.

It’s common to make a raw tomato salsa out of green tomatoes by finely chopping them and adding onion, garlic, herbs, and sometimes lemon juice.

There are no negative effects to eating raw green tomatoes.

But, they can also be cooked or pickled.

What to Do With Tomatoes That Are Still Green? 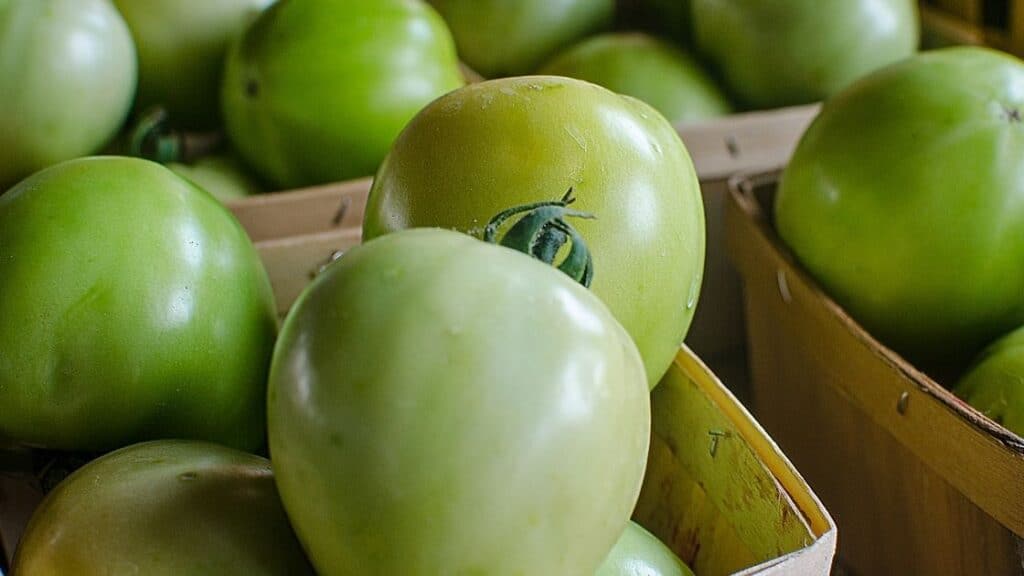 Tomatoes you find in stores are almost always at least light red in color.

Green tomatoes aren’t nearly as common, and you’ll only typically come across green tomatoes if you grow your own tomatoes.

So, here’s what you can do with green tomatoes.

Green tomatoes can be ripened or used raw or cooked.

Green tomatoes take anywhere from a week to 3 months to ripen.

They can be pickled, used raw in recipes such as salsas, or cooked like you would normal tomatoes.

However, they are less sweet and have a firmer texture.

Many people report finding green tomatoes to be very delicious when cooked.

They recommend putting them in a slow cooker, grilling them, and making them into a chutney.

The sky’s the limit with green tomatoes, and you can use them like you would any other vegetable or regular tomatoes.

The main difference is they don’t have the sweetness and flavor of a ripe tomato.

And taste a bit blander.

There are many different varieties of tomatoes, some are yellow or orange when they’re perfectly ripe.

But, as you may know, red tomatoes are the most common in stores.

The texture of green tomatoes is more firm and hard

Green tomatoes are typically quite hard.

This makes them much easier to slice but makes them not as good for some recipes that ripe tomatoes are used for.

For example, because of their firm texture, they aren’t as good in sandwiches or salads.

Where ripe tomatoes outperform in the texture and flavor department.

Pickled green tomatoes are also very nice, and make a great condiment to a sandwich, or with some cheese, bread, cured meats, and possibly a bottle of wine.

However, some can take a very long time but there are a few tricks to make them ripen faster.

Raw tomatoes are very delicious, and many people consume them every day.

Many people wonder how many raw tomatoes you should eat in a day where you won’t experience any negative effects.

I explained this in detail in this article about how many raw tomatoes you can eat in a day.

How Do You Store Green Tomatoes So They Ripen? 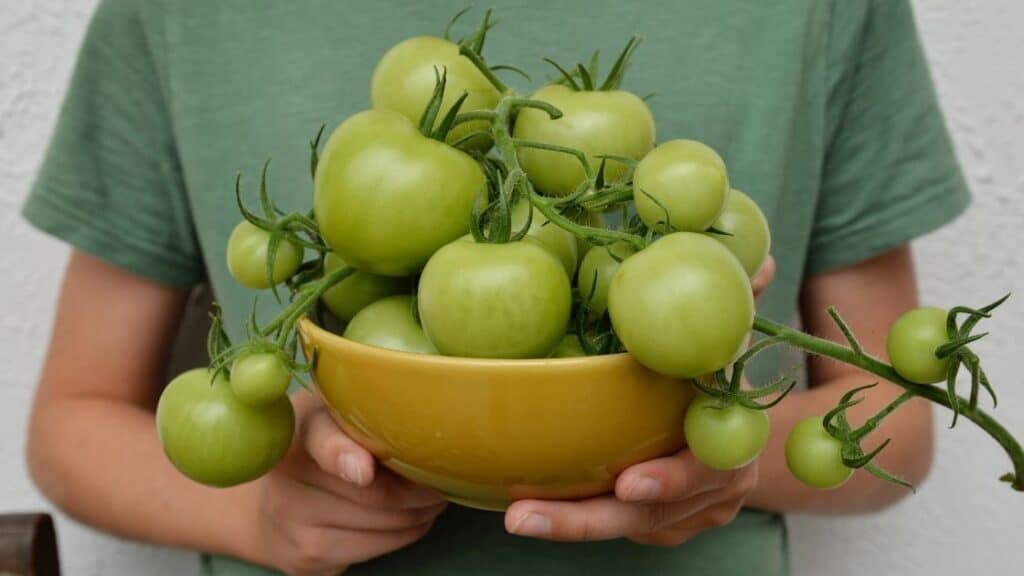 Interestingly, green tomatoes will ripen one picked off the vine.

However, they can take quite some time to ripen depending on how green they are, and how they’re stored.

Here’s how the different ways of storing them affect how they ripen.

Green tomatoes can be stored in a cool dark place, or a well lit area such as on a window sill to ripen.

If kept in a sunny spot they will ripen faster than in the dark.

Many people also report that storing them with ripe tomatoes or other fruit will cause them to ripen faster.

This can be done by putting them in a cardboard box with one piece of ripe fruit.

Or, in a paper bag with another piece of ripe fruit.

Some ripe fruit such as bananas can go brown and soggy before the tomatoes ripen.

Therefore, if you’re using a banana to help ripen faster then you may need to switch out the banana for a new one.

It can take 3 months for green tomatoes to become ripe in a cool dark place.

But, if the temperature is quite warm and they are exposed to a lot of sunlight they can ripen within a week or two.

Good places to put them where they’ll ripen faster is on the window sill in your kitchen.

Or on a deck or patio.

Most people report Just be aware of certain animals that might fancy a snack depending on what ones you have in your area such as raccoons.

When the first frost hits it can kill a tomato plant.

It’s often difficult to know exactly when this happens.

Some people have reported they pull up the whole tomato plant before the first frost, and hang it up somewhere with the tomatoes still on it.

Tomatoes on a tomato plant are typically at different degrees of ripeness.

Therefore, you can remove them as they ripen.

If tomatoes are partially ripe or turning a bit paler in color rather than being a deep green they will ripen faster than if they are dark green in color.

What Happens if You Eat Green Tomatoes? 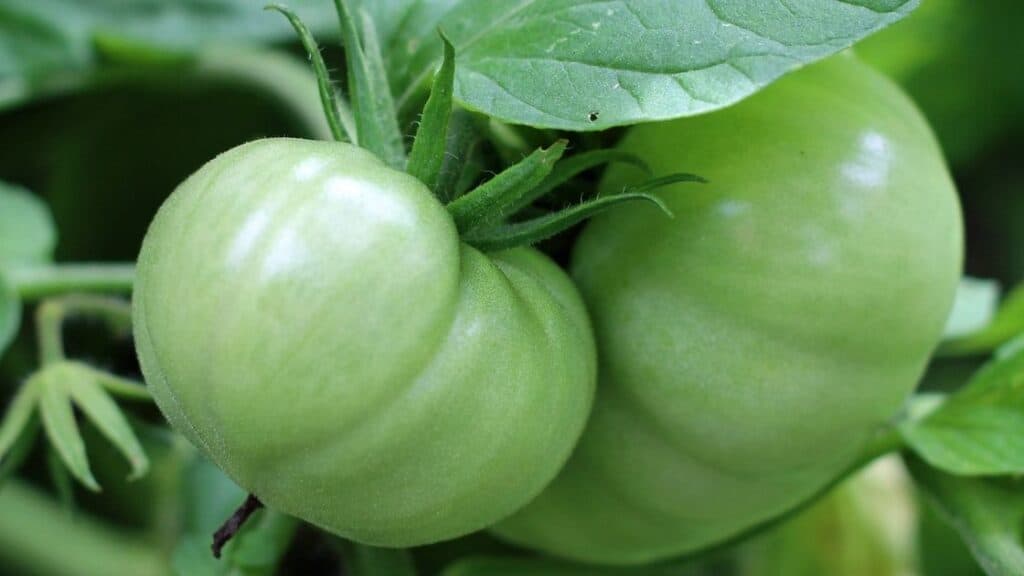 Some vegetables and fruit can be poisonous if consumed raw or when they aren’t yet ripe.

Nothing happens if you eat green tomatoes.

Green tomatoes are regularly consumed raw and cooked by many people without any ill effects.

But, any more than about 1 cup a day can cause diarrhea due to the high amounts of vitamin C in green tomatoes.

When you consume more than the recommended daily intake of vitamin C it has a laxative effect.

This is typically the case for most foods.

The reason is that most foods contain high amounts of at least one nutrient such as vitamin A, or iron.

When consumed in amounts over 1 to 2 cups, or typical large portion size, it will give your body more than the recommended daily intake of these nutrients.

Tomatoes are also known to be high in lectin which is a toxin.

Most nutrients when consumed in high amounts have a laxative effect, and cause nausea, headaches, or vomiting.

Both of these reasons, and why virtually all nutritionists recommend a diet consisting of a range of different foods.

Should you pick green tomatoes? 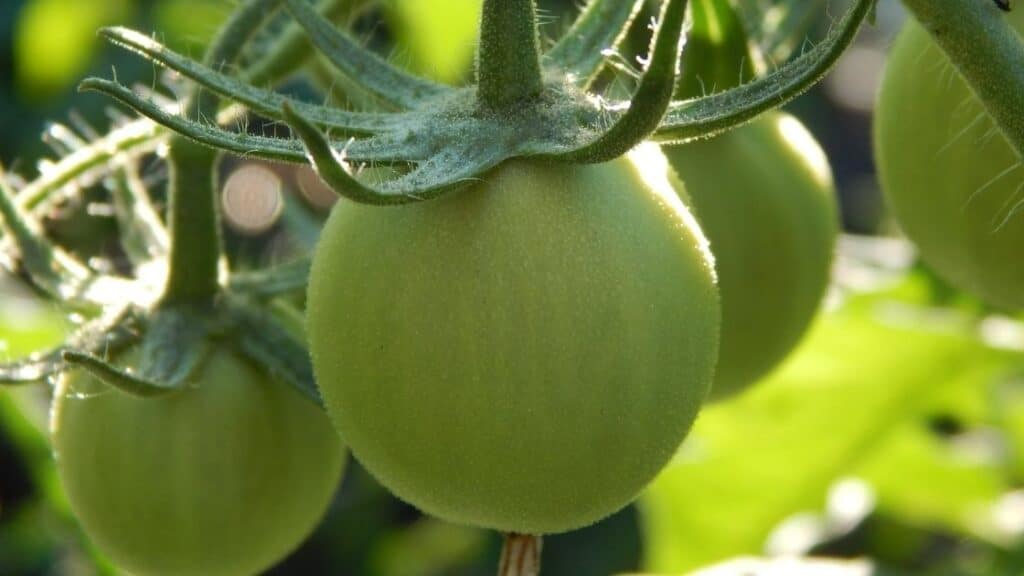 Green tomatoes are delicious when eaten raw and cooked.

However, they aren’t as flavorful as ripe tomatoes.

It’s fine to pick green tomatoes and use them immediately to cook with.

Or, keep them until they ripen.

If you experience frost in your region this will typically kill a tomato plant.

And you ideally should pick them before the first frost comes.

As the frost can cause damage to the tomatoes.

This is similar to what happens if you put fruits or vegetables in the freezer and then defrost them.

The texture becomes a darker color, and they become soft and mushy.

Rather than holding their shape and having a nice appearance.

At the end of the day, it’s up to your discretion whether you want to pick them long before the frost comes.

But, if you know frost is coming soon, then it’s a good idea to pick green tomatoes and it’s very possible you’ll need to discard them if they are frost-damaged.