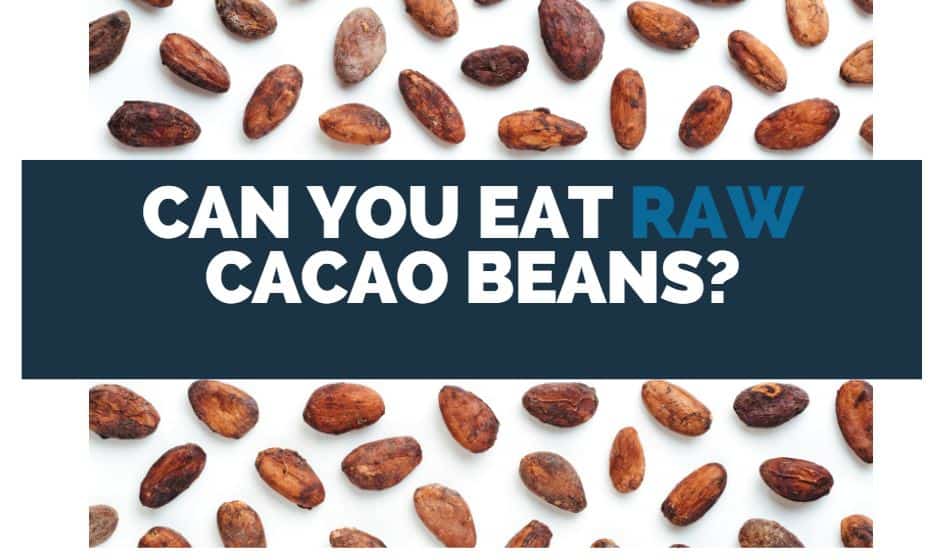 Having seen cacao beans being roasted and mashed into cacao pulp on their way to making some beloved chocolate bars I often wondered whether you could just eat the raw cacao beans directly.

So I done some research on this and here we are.

So, can you eat raw cacao beans?

You can eat raw cacao beans straight from the pod and as an added benefit they contain many beneficial nutrients.

Cacao beans that are packaged and labelled as ‘raw’, that you find in stores aren’t technically raw because they’ve been fermented and dried before hitting the shelf.

But, you eat still them from the packet without cooking.

I wondered if they taste like chocolate, what nutrients they have, and what the best ways are to eat them.

I compiled the answers to these important questions below.

Go to top
Table Of Contents hide
1 Are Raw Cacao Beans Nice To Eat?
2 How To Tell When Cacao Pods Are Ripe
3 What’s The Difference Between Cacao Nibs And Cacao Beans?
4 How Much Raw Cacao Is Too Much?
5 Are Cocoa Husks Edible?
6 Will Cooked Raw Cacao Retain Its Benefits?
7 Conclusion

The white pulp that surrounds the raw cacao beans tastes like a mixture between a sweet melon and a peach.

And the pulp that surrounds raw cacao beans smells like lychees, and has a tropical sweet smell.

The beans themselves taste like a very dark chocolate, that is quite bitter. 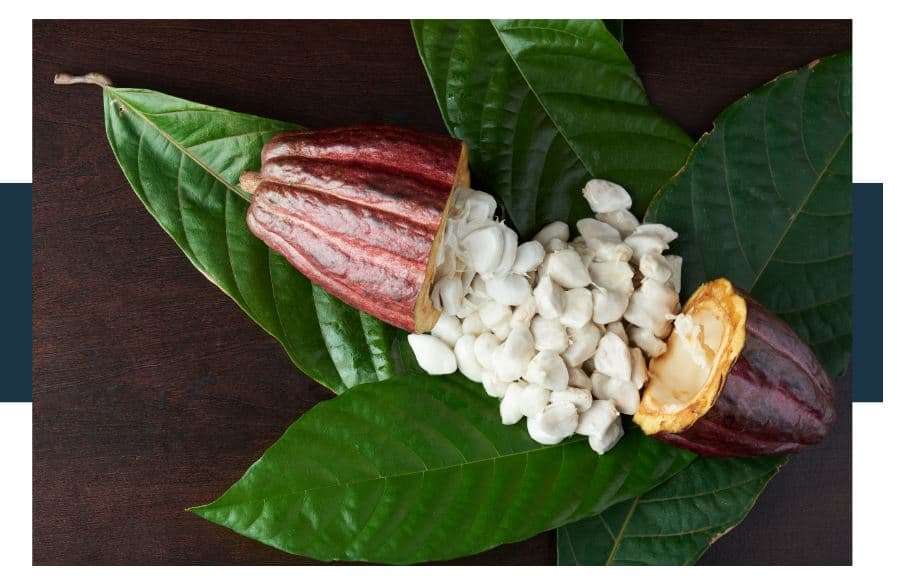 But, they still taste quite nice.

They very much taste like cocoa powder which you may have used to make drinking cocoa.

Or, tasted when you were baking a chocolate cake.

They have many beneficial nutrients, here’s a breakdown of their nutritional qualities:

And MakeChocolateFair.org has shown the main countries that produce cacao bean are:

But, you can find them in any tropical region such as South America, in the Pacific Islands such as Hawai’i, and throughout South East Asia.

If you travel to one of these countries, and are hiking about.

Or, see them on the property where you are staying, you can open up the pods and enjoy the delicious cacao beans.

How To Tell When Cacao Pods Are Ripe 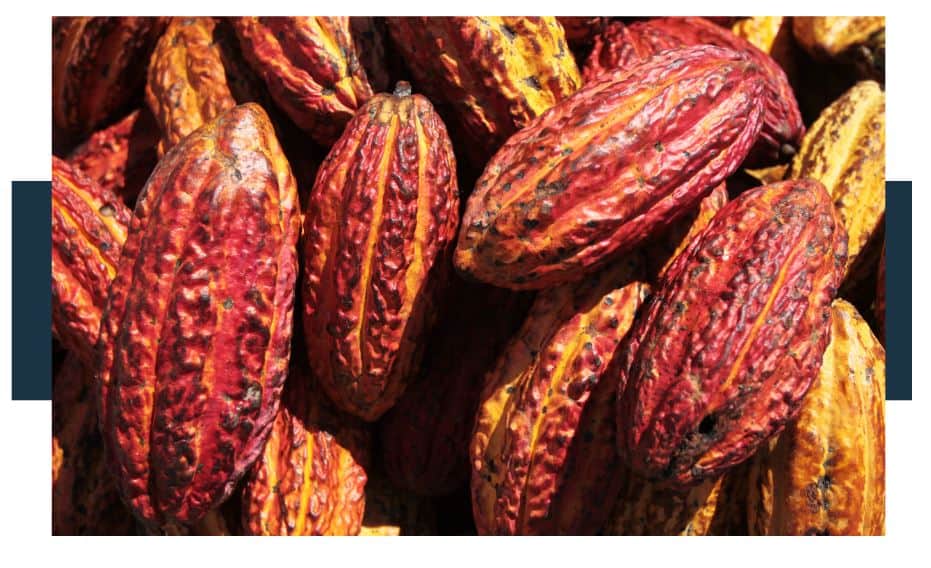 You can tell they’re ripe by scratching the surface of the pod.

When you scratch it with your fingernail the skin underneath shouldn’t have any green color to it.

Ripe cacao pods can be yellow, red, and all the way to a deep brown in color.

You can open them with a knife, a hammer, or by cracking them open on a rock.

The easiest way is to hit them with a heavy rock, a mallet, or hammer.

It will crack the hard skin of the pod and to reveal the cacao beans, and you may need to pry parts of it open with your hands.

What’s The Difference Between Cacao Nibs And Cacao Beans?

Raw cacao beans that are taken directly out of the cacao pods – what you pick from a cacao tree – are processed in a few ways.

Before they are sold in stores they are fermented for about 1 week.

This is where they are left to sit in a container, and is kind of like marinating process.

They marinate in their own flavors, and chemical reactions occur.

This gives them a stronger flavor, and breaks down the slimy sweet tasting coating and pulp that surrounds the cacao beans, according to the Food and Agriculture Organization of the United Nations.

After they have been fermented they are dried.

This makes them last longer, and stops them from going bitter.

It also makes them taste less bitter overall. Once, they’ve been dried and fermented they are ground up, into smaller pieces.

About the size of gravel, as you may be aware these are cacao nibs.

Cacao nibs are the processed version of cacao beans which are used to make chocolate, and also can be eaten as they are.

They can be added to smoothies, muffins, biscuits/cookies, mixed with nuts and dried fruit, and coffee or hot chocolate.

How Much Raw Cacao Is Too Much? 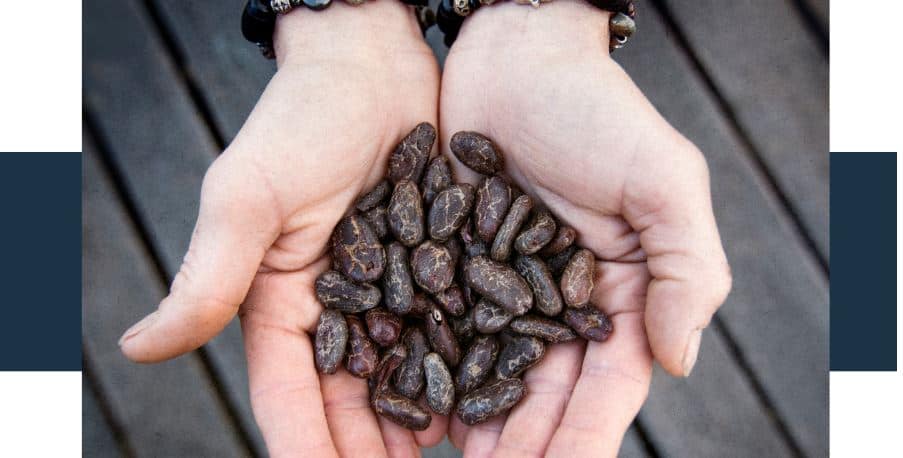 Raw cacao and processed raw cacao bean products like cacao nibs, are high in caffeine, and another stimulant called theobromine, according to Healthline.com.

Caffeine in high doses can lead to anxiety, jitteriness, increased heart rate, and make it difficult to sleep.

If you consume them close to bedtime.

The maximum amount of raw cacao you can eat depends on how much caffeine you consume.

If you drink a lot of coffee, tea (not herbal), or energy drinks your caffeine tolerance goes up.

Which means you won’t notice the effects as much.

But, having a high caffeine tolerance also has negative effects on your adrenaline glands.

I recently discussed the negative effects of too much caffeine in more depth in an article about whether coffee and bananas are good to eat for breakfast.

You can learn more about it by reading that article by clicking Coffee and banana for breakfast.

But, suffice to say you should eat only a small amount and monitor how you feel. If you don’t feel anxious or jittery you can eat more the next time.

Also, Healthline.com has stated that eating raw cacao is generally unsuitable for expectant mothers, and you should consult with a medical professional before eating them. 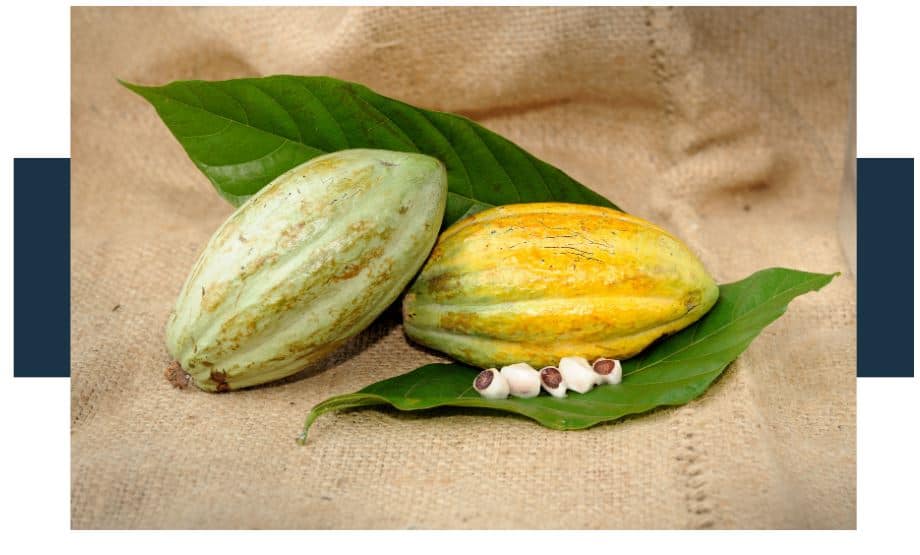 According to this study, cocoa husks are rich in protein, dietary fiber, caffeine, flavonoids, theobromine.

They are generally dry to eat on their own, but you definitely can.

However a good way to use them is to grind them up as a power which can be added to cereal, smoothies, cakes, and other baked goods.

They are mostly discarded during cacao processing and the above study looked at how other ways that they can be used.

And found that they could be utilized in the pharmaceutical, and cosmetic industries, as well as being used as organic fertilizer. 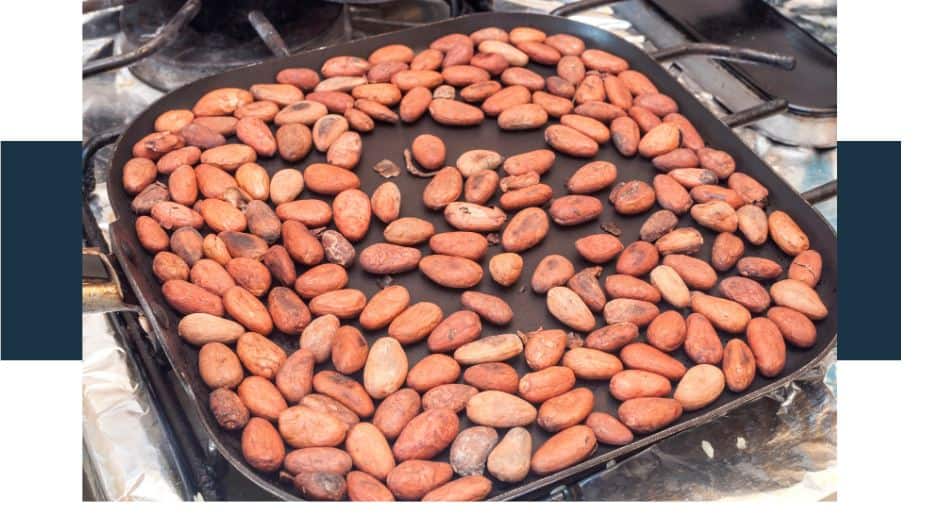 Raw food has more nutrients than cooked food according to this study published in the journal Frontiers in Psychology.

Also this article by the University of Missouri explained that dried foods have more calories than raw food.

So, if you’re aiming to lose weight, raw cacao beans are a better option.

Raw cacao that is sold in stores has normally been dried, and fermented, which will mean it has less nutrients than raw cacao directly from the pod.

And when you cook it, it will lose even more nutrients.

However, there has been no study that has looked at the exact percentage change between raw cacao, and when it has been cooked for example when it has been used to make cakes, biscuits, chocolate, and hot drinks.

So, at this stage I can only say that it’s healthier to eat raw cacao beans than cacao that has been dried or cooked.

You can eat raw cacao beans, and they are rich in many beneficial nutrients.

The actual beans themselves taste like a bitter dark chocolate. And the fresh cacao bean husks – which are moist and soft, taste like sweet melon mixed with peach.

Raw cacao beans that you find in stores are normally dried and fermented, where most of the husk (the sweet part) has been removed.

But, not as healthy as cacao beans that you eat straight from a cacao pod.

However, cacao in general is high in caffeine and other stimulants which can cause negative effects when you eat too much.

So, you should only eat a little bit at a time, and eat it in moderation.

Also, if in doubt, it’s a good idea to consult a health professional.