Some tomatoes develop wrinkles before they ripen.

While others develop wrinkles after they’ve been harvested.

Today, I will explain whether you can eat wrinkled tomatoes.

Wrinkled tomatoes are of two types: one is a result of when a tomato goes from being ripe to being almost going bad, the other occurs naturally as the tomato grows and is common in heirloom tomatoes.

This generally isn’t very pleasant to eat, and it has a vinegar-like flavor.

In this article, I will explain the two types of wrinkles that can develop on tomatoes, why it occurs, what you can do with wrinkled tomatoes, and whether you can remove or make them less wrinkly by rehydrating them.

What Does It Mean if a Tomato Is Wrinkly? 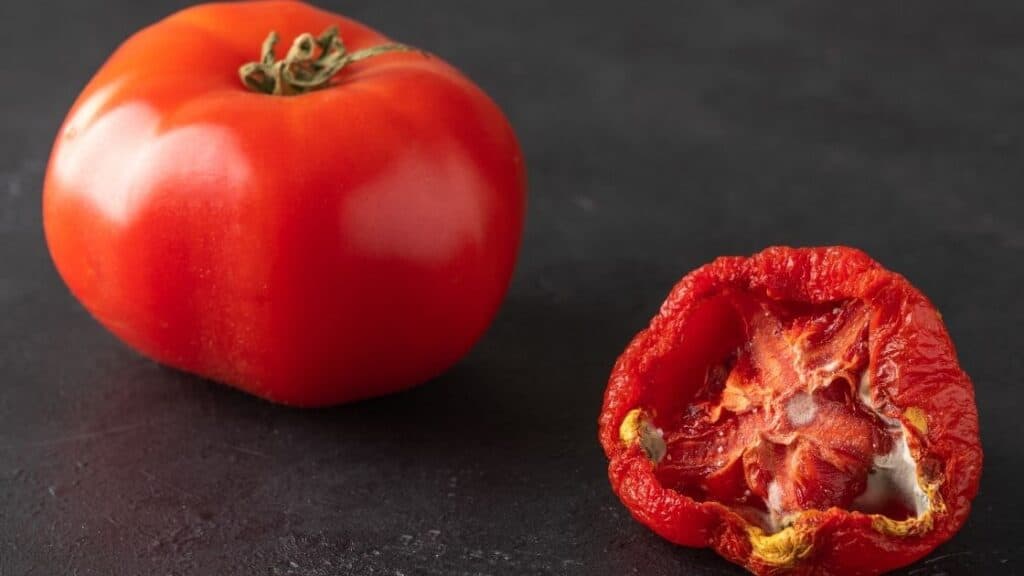 Most tomatoes you find in stores are completely smooth. But, when growing your own they can come out wrinkly.

Or, once you’ve stored your tomatoes for some time they can develop wrinkles.

Here’s what causes a tomato to develop wrinkles.

Wrinkles on a tomato can occur naturally on heirloom varieties of tomatoes but can also occur if a tomato over-ripens.

The wrinkles are distinct in appearance.

The wrinkles on an heirloom tomato are wide and appear as folds in the skin.

Whereas, wrinkles caused by an overripe tomato are very small.

Heirloom tomatoes are those that are grown from seed and have been handpicked because they have special qualities.

You’re more likely to get these kinds of seeds from a friend and you won’t find them in generic stores like Walmart or a garden supply store that is a large chain.

If you develop a relationship with a grower at a farmers market they’ll often be in the know about where to get some heirloom seeds.

The wrinkles on heirloom tomatoes naturally develop as they grow, and aren’t related to how ripe or unripe they are.

This is just the way they grow.

They tend to have long wrinkles that are vertical.

Running from the top of the tomato to the bottom.

Here’s a tongue in cheek video about what Heirloom tomatoes are:

The other type of wrinkles that can develop on a tomato occur because the tomato has become overripe.

A registered dietician also has said:

“Tomatoes, specifically cherry or grape varieties, can start to wrinkle and get soft when they’re on the verge of going bad. They’re perfectly edible but have lost some flavor and firmness, so they taste subpar.”

As tomatoes are transitioning from being ripe to becoming overripe the flesh becomes softer, and the skin develops faint and small wrinkles.

These are perfectly fine to eat for quite some time.

But, eventually, they will develop a sour taste similar to vinegar.

Also, if mold begins to grow on them, you should not eat the moldy parts.

Mould can be very toxic and will typically give you food poisoning, and in some cases can cause death according to medical professionals (source).

It’s fine to cut away the moldy parts and consume the rest.

Typically the flesh around the moldy areas will be very discolored.

It will be brown, white, black, or green, and the flesh surrounding it will be a darker shade of red.

When the skin is wrinkly the tomato is generally a lot sweeter tasting.

What Can I Do With Wrinkled Tomatoes?

Tomatoes that are wrinkly because they’re a bit overripe generally aren’t as visually appealing.

Their flesh also tends to have a softer texture.

So, below I will explain the best ways to prepare wrinkled tomatoes.

But, to hide the wrinkly appearance they can be oven-baked to turn them into semi-dried or dried tomatoes.

They can also be turned into tomato puree, or made into a sauce.

Making dried or semi-dried tomatoes is as easy as slicing them and putting them on oven paper.

Then pour some olive oil, and sprinkle with salt and pepper (optional).

After that, bake them on medium heat until they shrink a bit and get as dry as you want to make them.

There is also what’s called tomato puree or strained tomatoes.

Many people wonder if tomato puree and strained tomatoes are the same things.

I explained in this article the difference between strained tomatoes and tomato puree.

Tomato puree or tomato paste is commonly made to make it faster to prepare sauces for pasta, and pizza.

The overall method to make it is to boil the tomatoes until they’re cooked, then remove the skin and put them in the blender.

After that, you strain the liquid mixture to remove the seeds.

Then boil it down to make a thicker consistency.

This is slightly different to how tomato sauce is made.

Tomato sauce is made by first lightly frying onion, garlic, and sometimes carrot and celery.

After mixing all the ingredients together and cooking the tomatoes, the whole mixture is then blended to give the smooth and liquid consistency.

Can You Rehydrate Wrinkled Tomatoes? 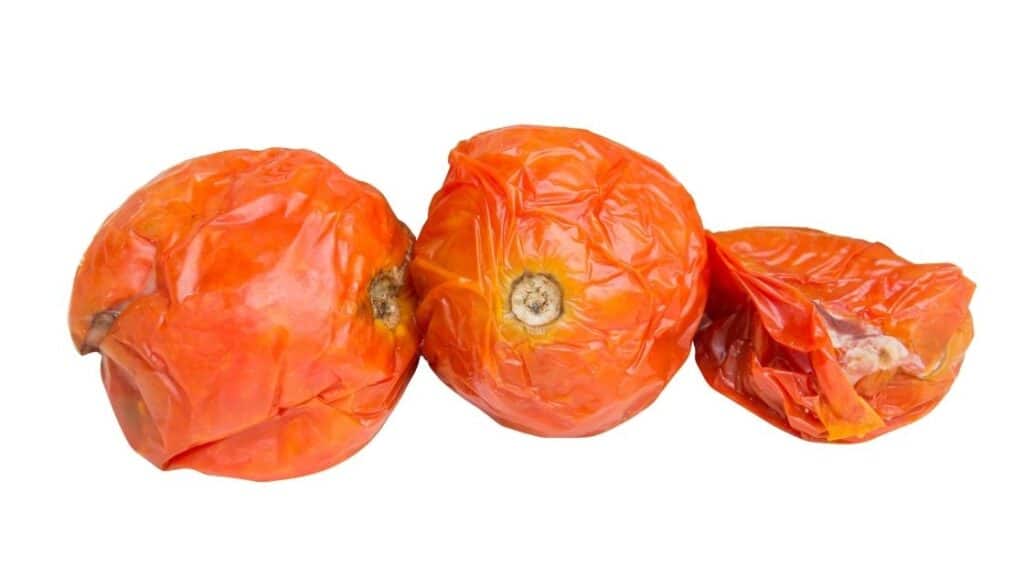 The wrinkled appearance that tomatoes can get from being overripe isn’t very visually appealing.

However, the wrinkles that heirloom tomatoes get are neither here nor there.

It’s definitely plausible that the wrinkles in tomatoes can come out.

But, is it possible to rehydrate wrinkled tomatoes?

Rehydrating wrinkled tomatoes does not remove the wrinkles.

Rehydrating wrinkled tomatoes by soaking them only has the effect of making the flesh softer and mushier.

There isn’t currently any known way to take the wrinkles out of wrinkled tomatoes.

Therefore, wrinkled tomatoes are best prepared in a way where the wrinkled skin isn’t noticeable.

Or, by removing the skin.

There are a few ways to prepare wrinkled tomatoes so that the wrinkled skin isn’t noticeable.

One way is to slice them and cook them in the oven to turn them into something that is very similar to sundried tomatoes.

You can also bake them for more or less time in the oven.

Baking them for a shorter amount of time will make them moister.

Whereas, cooking them for longer will dry them out more.

As you may know, dried fruits are quite popular such as dried apricots.

But, if you have your own dehydrator at home, you can put any fruit or vegetable into it.

These tend to keep longer.

The drying process will shrivel the tomatoes and hide the wrinkly skin.

Another way is to sun dry them.

Also, when making tomato sauces, or tomato puree the skin is removed, so there won’t be any way to tell that the tomatoes have wrinkly skin.

When tomatoes get overripe the skin goes wrinkly and the flesh gets more squishy.

It’s also common for liquids to seep out and form a pool of liquid underneath the tomato.

But, it’s always best to taste a small part of it first to see if it tastes ok.

As they get overripe they can develop a sour taste, which some people may not like.

Cut off a small slice and taste a very small part of it to see how it tastes.

If it tastes particularly unpleasant to you then it’s best to discard it.

Squishy tomatoes with wrinkled skin can last for about 2 weeks in the fridge.

On the other hand, if you leave them on the counter or in the pantry where temperatures are quite warm, or they get a lot of sunlight they can go bad much sooner.

You may have come across green tomatoes.

These are often harvested because they were the last to form on a tomato plant.

And they won’t ripen before the first frost comes and the tomato plant will die.

However, some people also pick tomatoes early when they’re green to eat in a range of dishes.