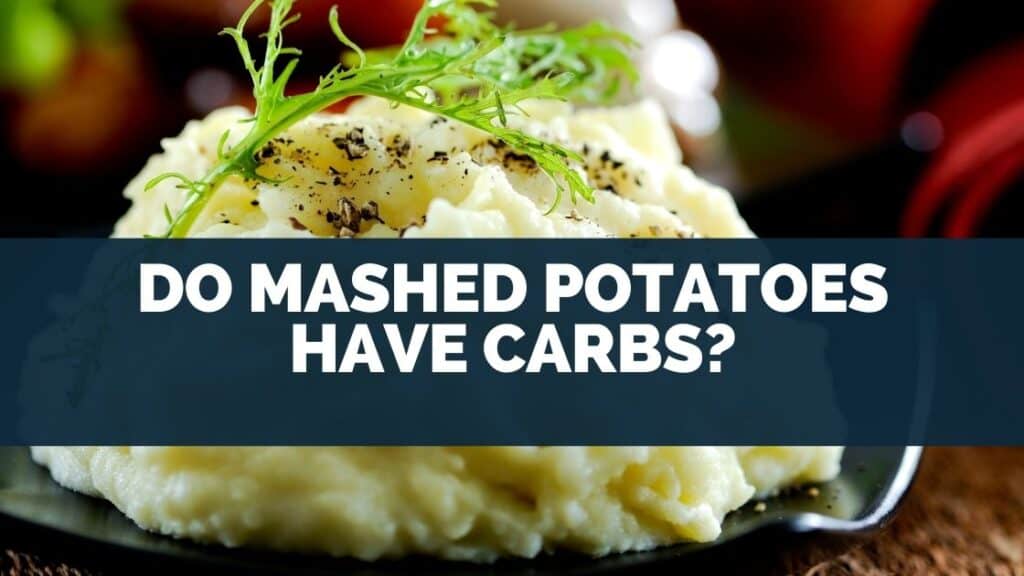 Mashed potatoes are a staple side dish for many people.

It is often served with dinner, Thanksgiving dinner, and sometimes even breakfast.

Mashed potatoes are made by boiling potatoes and then mashing them with butter, milk, salt, and pepper.

Mashed potatoes have carbs because they are made of starch that has been cooked into a form that is easily digested by the body.

The amount of carbs in mashed potatoes varies depending on what type of potato you use to make them.

Russet potatoes have the most carbs at 29 g per cup.

However, if you use sweet potatoes to make mashed potatoes, they will only have 11 g per cup.

Carbohydrates are a type of macronutrient, together with fat and protein.

About 175 calories are contained in one cup of homemade mashed potatoes.

The bulk of this energy comes from the carbohydrates in potatoes, which contain 37 g of total carbohydrates, of which 3 g is dietary fiber.

You will gain energy from these carbohydrates and experience a feeling of fullness after eating them.

The mashed potatoes also contain approximately one gram of fat per cup and four grams of protein per cup.

You can increase the fat content of your potatoes by adding butter or margarine, which adds approximately 4 g of fat per teaspoon.

Vitamin B6 – As well as boosting your vitamin B6 intake, mashed potatoes are a good source of pyridoxine.

Several hundred enzymes are activated by vitamin B-6, including proteins that are involved in the metabolic process of proteins, fats, and carbohydrates.

As well as regulating your immune system, it contributes to the production of neurotransmitters, which are chemicals essential for the functioning of the nervous system.

A cup of mashed potatoes provides 38 percent of your recommended daily intake of vitamin B6 when eaten, and it boosts your B6 intake by 0.49 milligrams.

Potassium – As a rich source of potassium, mashed potatoes are beneficial for your health.

Approximately 622 mg of potassium is contained in one cup of mashed potatoes.

You need potassium to maintain your body’s fluid balance and to nourish your nerves and muscles.

In addition to lowering your blood pressure, potassium-rich foods can also reduce your body’s sensitivity to salt.

Instead of adding fat, try replacing it with non-fat milk and adding creamy texture by using pureed cottage cheese or Greek yogurt, both of which contain little fat but are high in protein.

Serve your potatoes with sauteed mushrooms and bell peppers to add flavor.

Garnish your potatoes with parsley or green onions.

Are Mashed Potatoes High In Carbs? 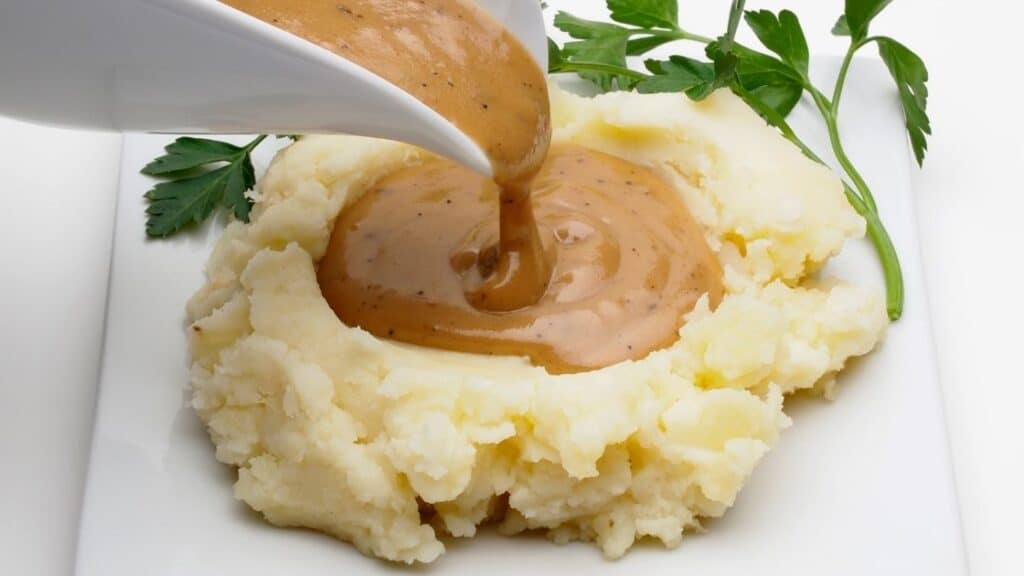 Mashed potatoes are high in carbs because they contain starch from potatoes.

The starch is converted to sugar when it is cooked and mashed.

The amount of carbs in mashed potatoes depends on the type of potato used and how much milk or other ingredients are added to the dish.

Mashed potatoes are a delicious side dish that is often served with a variety of dishes.

They can be made in many different ways, but the most common recipe is to boil potatoes, peel them, and then mash them while they are still hot.

The mashed potatoes can then be seasoned with butter, salt, and pepper.

Using a potato masher or a food mill to mash the potatoes is important because it will make them light and fluffy rather than sticky and lumpy.

You should also try adding some milk or cream for flavor if you want your mashed potatoes to be extra creamy.

Lastly, you should always season your mashed potatoes with salt and pepper so that they taste great!

However, people with diabetes may have to be careful about their mashed potato intake.

A person with diabetes has an inability to regulate his or her blood sugar levels effectively.

Blood sugar is affected by carbohydrates, so the American Diabetes Association’s meal plan recommends that diabetics consume no more than 45% of their total calories from carbohydrates, which is approximately 45 to 60 grams per meal.

A meal’s carbohydrate total is determined by the amount of fruit, vegetables, grains, bread, and sugar added to it.

Approximately 62% to 82% of the total carbohydrates recommended for an entire meal can be found in one cup of mashed potatoes made with whole milk.

The diabetes diet does not restrict the consumption of mashed potatoes, but the serving size should be limited.

Herbs and spices are a better alternative to butter, and hypertension can be a risk factor for heart disease when a diet is high in salt.

Sweet potatoes can be mashed for variety.

There is no glucose spike in the blood after consuming a sweet potato with skin, as it has a low glycemic index of 44.

If you prefer, you may also substitute mashed cauliflower for potatoes.

Cauliflower contains very low amounts of carbohydrate and fiber content of approximately 5 g per cup, making it a healthy food choice for people with diabetes.

How Many Carbs Are In A Bowl Of Mashed Potatoes? 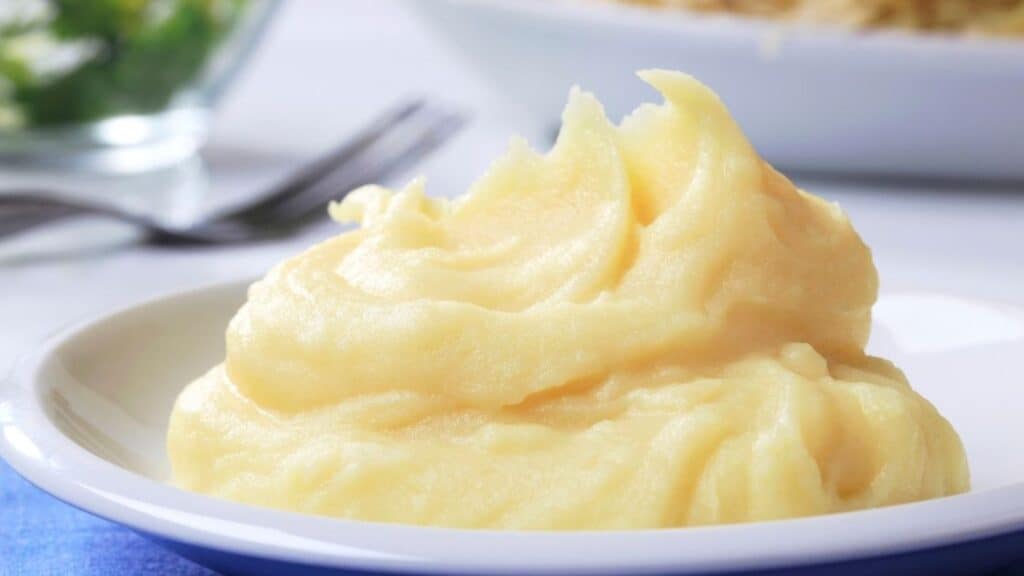 Potatoes are a carbohydrate-rich food that can be eaten in moderation.

A medium potato has about 30g of carbohydrates.

Adding milk and butter to your mashed potatoes will increase the carb content by about 3g per cup.

The number of carbs in a bowl of mashed potatoes will depend on the type of potatoes, the type of milk, and how much butter or cream is added.

Although potatoes are often thought of as a starchy vegetable, they are actually quite low in carbs.

A 100-gram serving of potato contains only 17 grams of carbohydrates, which is roughly half the amount found in a comparable serving of cooked white rice.

In fact, potatoes are one of the best sources of dietary fiber, providing 2 grams per 100 grams.

This makes them an excellent choice for people who are looking to increase their fiber intake.

Additionally, potatoes also contain a variety of vitamins and minerals, including potassium, magnesium, and Vitamins C and B6.

How Many Carbs Are In A Cup Of Homemade Mashed Potatoes? 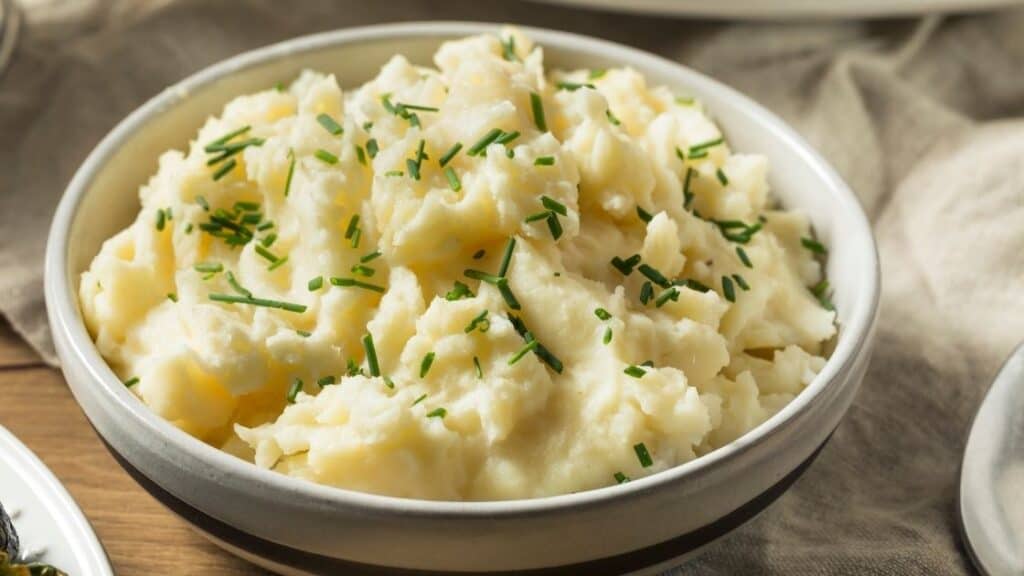 In order to figure out how many carbs are in a cup of mashed potatoes, you will need to know the number of cups in a pound, as well as how many potatoes you have cooked and mashed.

Once you have these two figures, figuring out how many carbs are in your homemade mashed potatoes is as simple as multiplying them together.

To make mashed potatoes a healthy dish, they must contain various ingredients.

There is not much fat in plain potatoes as it contains a negligible amount per serving.

In comparison, dairy products such as cheese and butter contain higher amounts of saturated fats, which can increase the level of cholesterol in your bloodstream.

Using whole milk and butter to make 1 cup of mashed potatoes gives you 10 g of total fat, and 7 g is saturated fat.