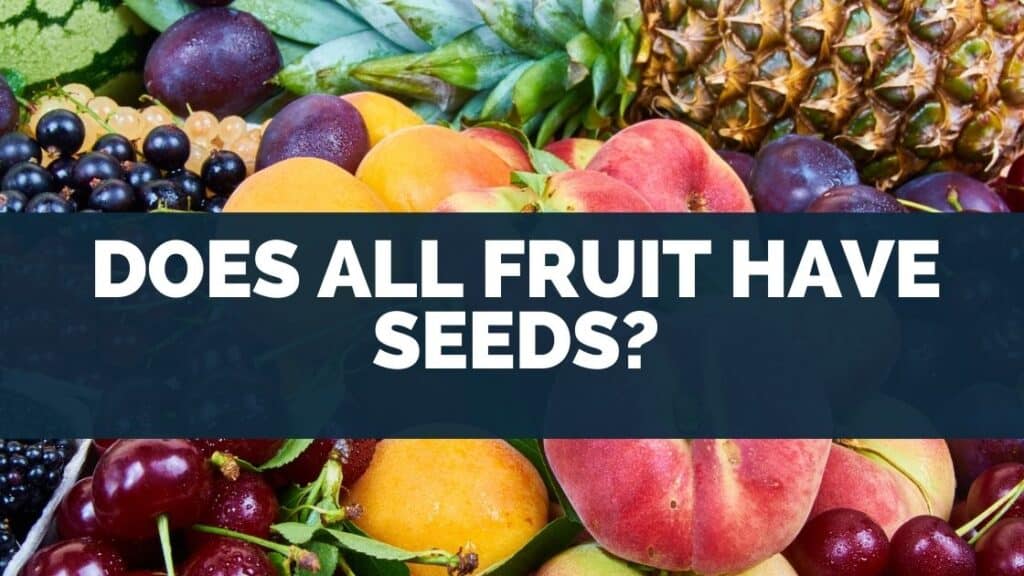 I love eating fruits, and noticed that some varieties of fruits don’t have seeds.

I find them much easier to eat.

So, I was curious about whether all fruits have seeds.

I looked into the definition of a fruit, as well as, where seedless fruits come from, and here’s what I found.

Overall, all fruit have seeds according to Encyclopedia Britannica.

Seedless fruit varieties are created by propagating cuttings from the parent plant.

The cuttings are grown in soil or grafted to another tree.

Certain fruits can develop with no seeds if they aren’t pollinated.

Many fruits have very small, almost unnoticeable seeds, so I wanted to know what seedless fruits there are, and which ones are just pretending.

Go to top
Table Of Contents hide
1 What Fruits Do Not Have Seeds?
1.1 Why do some fruits have no seeds?
1.2 Can you eat all fruit seeds?
2 Which Fruit Has No Seed and No Skin?
3 What Are Seedless Fruits Called?
4 What Was the First Seedless Fruit?
5 What fruits have large seeds?

What Fruits Do Not Have Seeds? 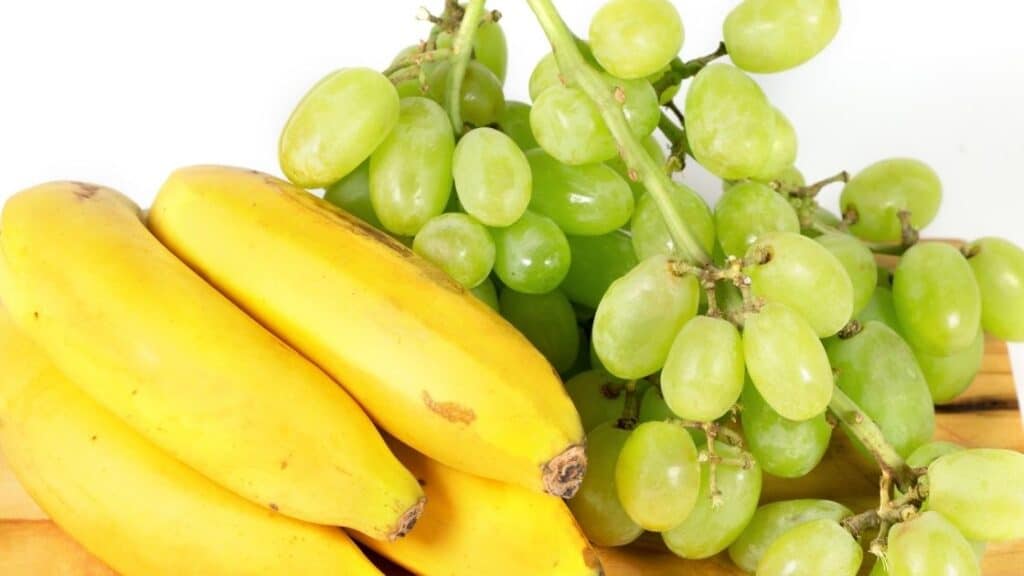 I prefer eating fruit without seeds because it’s faster to eat, and I don’t need to spit out the seeds.

So, I looked into what fruits do and don’t have seeds and thought I’d compile a list of them, here’s what they are:

No fruits are natively seedless.

When a fruit tree doesn’t produce seeds it can’t produce new plants on it’s own.

Instead, seedless fruit varieties are preserved by botanists through cuttings or by grafting them onto another tree.

The seeds in bananas that you buy in supermarkets and grocers are infertile.

So, you can’t grow a banana in your backyard out of the seeds from a banana you buy in stores.

Large scale production of bananas is generally done by taking a small piece of cutting from a banana plant.

These are grown in small pots in nurseries.

There are baby plants that are attached to the base of the banana plant.

They are removed using a spade or trowel, and can be planted as they are to create a whole new banana plant.

However, certain fruits such as blueberries have tiny seeds that are almost unnoticeable. Interestingly bananas are a type of berry, and too have tiny seeds.

Fruits with small unnoticeable seeds or seeds that you eat with the fruit:

Why do some fruits have no seeds?

Seedless fruits are created by keeping fruit trees where they won’t be pollinated.

This can be done in a few ways.

First, the flowers of the fruits can be isolated by wrapping them in a cover.

Typically, a plastic wrap or bag or secured around the fruit to keep off pollen, which will fertilize the fruits.

They can also be isolated by planting clones together in large patches.

For example, an area that has 20 to 30 clones, and no other species that will pollinate them nearby.

From time to time there are genetically rare cases where a particular plant will produce fruits that don’t produce seeds.

Similar to how some people have a genetically rare trait where they have two different colored eyes.

These have been kept and propagated far and wide.

The exact origins of some of these varieties are said to have been around for many hundreds of years.

Such as seedless navel oranges in the USA.

Can you eat all fruit seeds?

Not all fruit seeds are edible and some can even be highly toxic.

It’s generally advised that you do not consume fruit seeds of common fruits like oranges, apples, and watermelons as in high doses they give you an upset stomach.

Fruits that have small unnoticeable seeds are OK to eat. For example, strawberries have tiny seeds on their skin.

Seeds of fruits like passion fruit are much larger but are also consumed together with the pulp.

Some people wonder whether eating the seeds of passion fruit is OK. I covered this topic as well as the health benefits of eating passion fruit in this article.

Which Fruit Has No Seed and No Skin? 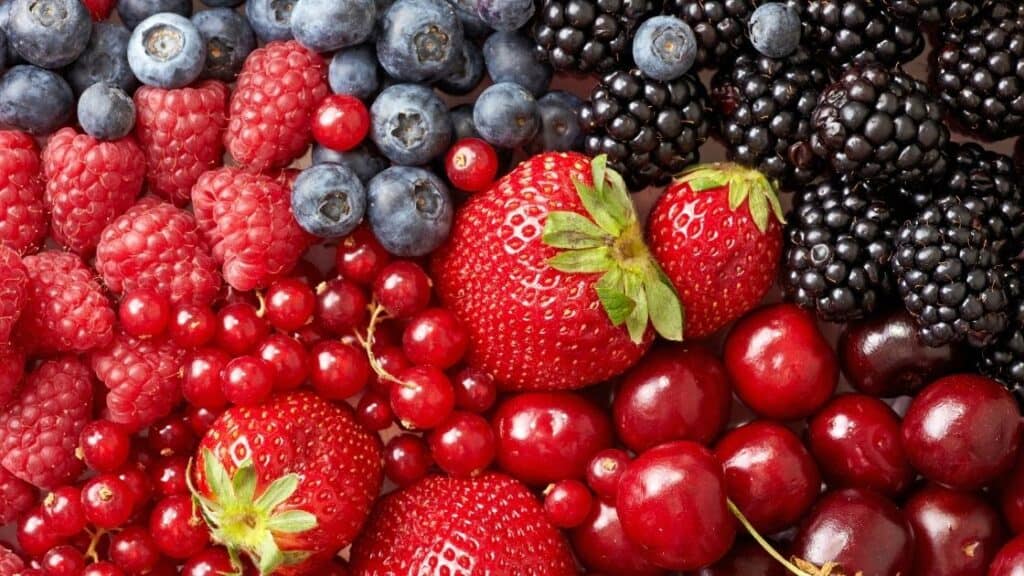 I often find peeling fruits a bit of a chore, especially when some of them have very tough skin, or it doesn’t separate from the fruit easily.

So, I wanted to know which fruits have no seeds, but also have no skin.

All fruits have skin.

But, various fruits have thin edible skin such as berries.

Berries also have very small seeds that aren’t noticed as you eat them.

Some fruits have both a skin and a peel, such as citrus fruits.

Whereas, others only have skin.

Since all fruits have skin I’ve narrowed down which fruits are seedless and have no skin to those with thin skin.

The closest fruit that has no seeds and no skin are seedless grapes.

Seedless grapes are common and they have quite a thin skin compared to other fruits like pineapples, and jackfruit.

Other fruits that have soft edible skin are:

Stone fruits like peaches, nectarines, and plums have large seeds.

But, the seed is in the center of the fruit, so it’s quite convenient to eat the fruit without needing to spit out the seeds.

You can simply bite around it, or cut the flesh away from the seed.

There are a huge number of fruits and vegetables.

I recently looked at how many fruits and vegetables there are, as well as, what fruits are the most popular.

Interestingly, certain fruits are made almost entirely of skin, for example, loquats.

Loquats have a thick skin that is edible and sweet that is about 1/2 of an inch (1 cm) thick.

Inside the skin is only 3-4 large inedible seeds.

Some fruits have edible skin but are also housed in a protective peel.

For example, citrus fruits, and durian.

What Are Seedless Fruits Called? 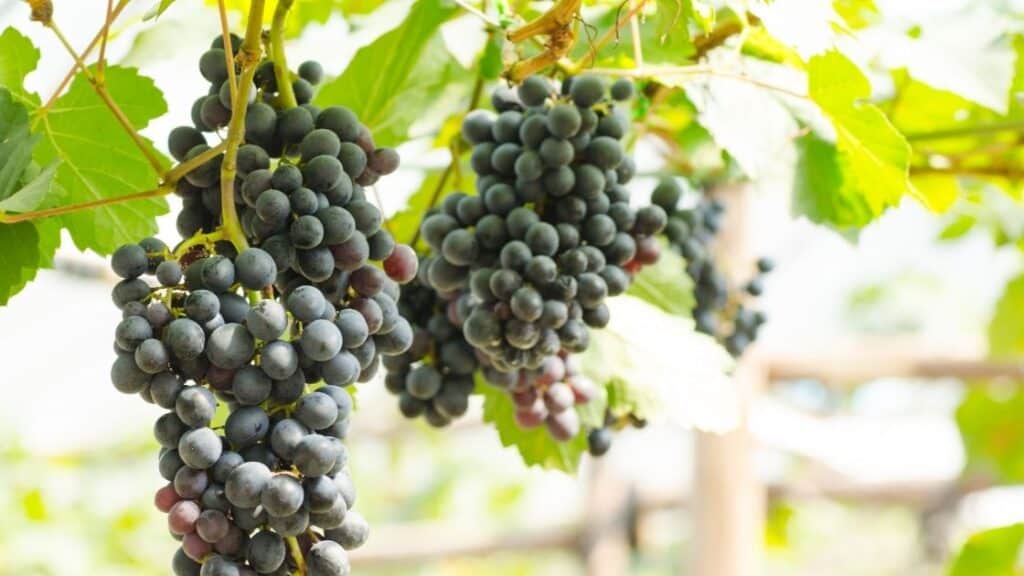 I’ve noticed there are different categories of fruits such as berries and melons.

So, I was curious about what seedless fruits are called.

A seedless fruit plant is called a parthenocarp.

Parthenocarps will die out when the plant dies unless cuttings are made and propagated as it has no seeds to produce offspring.

In general language, seedless fruits are called the name of the fruit, with the word seedless in front.

In everyday speech, people call seedless fruits ‘seedless + whatever the name of the fruit is’.

What Was the First Seedless Fruit? 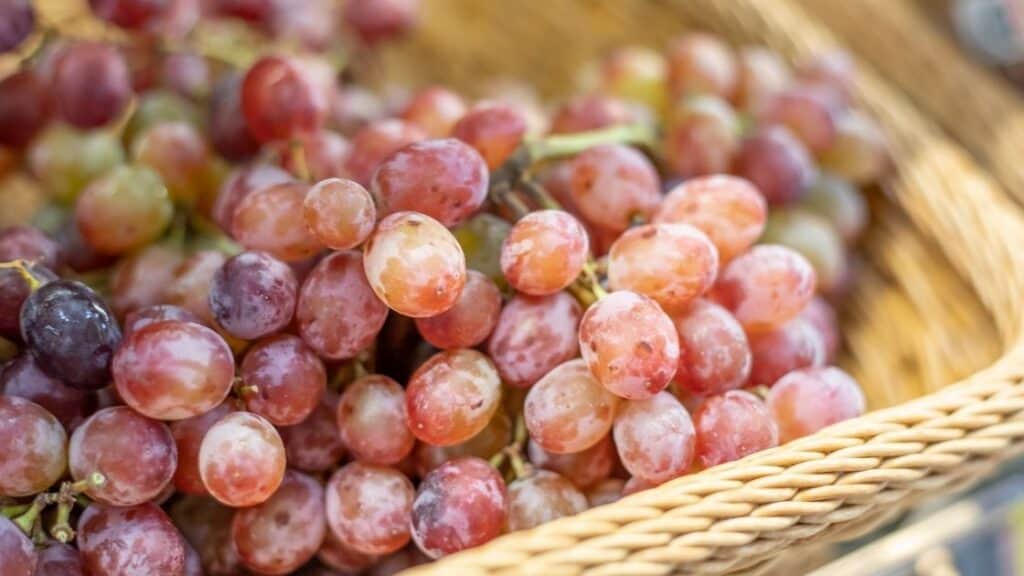 I find seedless fruits fascinating, as well as easy to eat.

Based on my research, here’s the answer.

Seedless grapes are considered to be the first seedless fruits.

Seedless fruits are thought to have existed as far back as ancient Roman times from 27 BC to 476 AD, or around the year 250.

Seedless grapes arrived in the USA in 1876.

Seedless grapes were brought to the USA in the 1870s by a Scottish farmer William Thompson.

Interestingly, navel oranges that are widely grown and consumed throughout the USA were originally discovered in South America.

They had no seeds, and the peel was easy to remove.

The plant was propagated through cuttings, where it eventually made its way to Southern California.

Due to the fact that written records – before computers – degrade over time any records of seedless fruits that have been grown in the past are fragmented.

And it can’t be said for sure that other seedless varieties weren’t cultivated and kept earlier than Roman times, or in different regions around the world.

What fruits have large seeds? 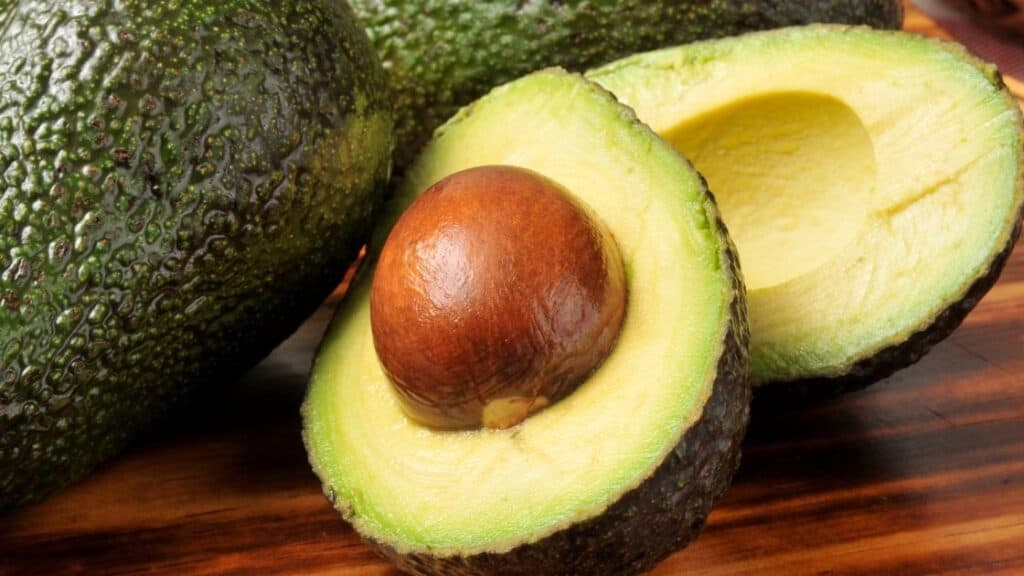 A coconut is entirely a seed, but it’s commonly thought of and consumed like a fruit or vegetable.

Avocados and olives are savory and so they are thought of as a vegetable, however, they are botanically a fruit.

Fruits with large seeds tend to only have one seed in the center of the fruit.

Examples are the stone fruits such as plums, apricots, and dates.

Whereas, citrus fruits like oranges and lemons tend to have lots of medium-sized to small seeds dispersed throughout the fruit.

Another interesting point is that some fruits have a higher flesh-to-seed ratio than others.

But, the overall size of the seeds can be quite small.

For example, loquats have quite large seeds compared to the flesh of the fruit, but they aren’t as big when you compare them side by side to other fruit seeds like mangoes or avocados.