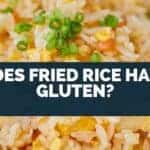 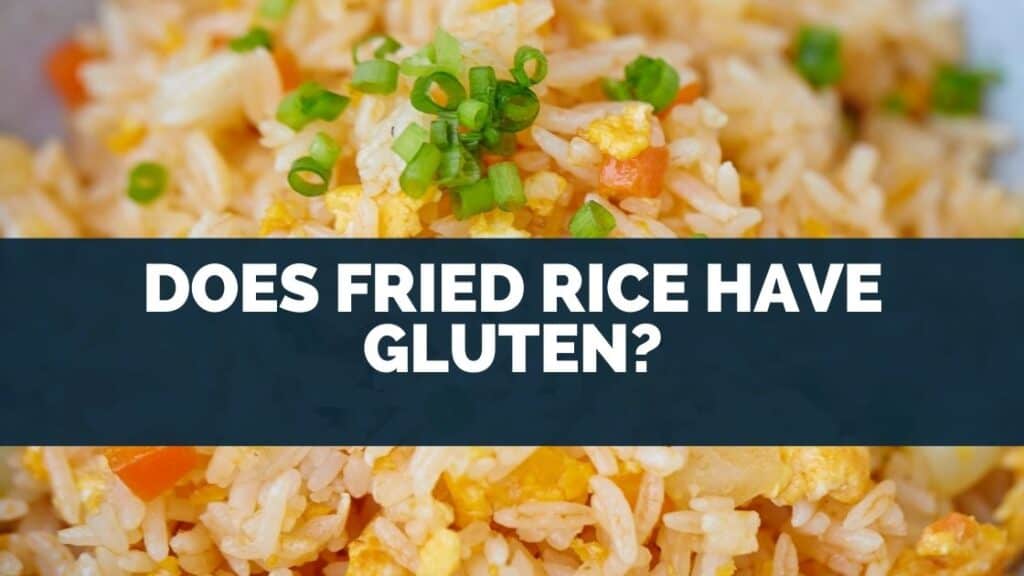 Fried rice is a known staple food across Asian countries.

It is an all-time favorite recipe with leftover rice, peas, carrots, eggs, and meat and contains sauce – which is soy sauce.

Some countries have different ways of preparing fried rice in which they add some ingredients to make the flavors more unique.

However, if you are switching to a gluten-free diet, you might want to reconsider if the dish works best for you.

The majority of soy sauce brands include wheat in their ingredient lists making it not a good choice for people who avoid gluten.

For a better option, gluten-free soy sauce made with rice is a great alternative.

For example, Yangzhou fried rice, a popular dish in China, contains a generous amount of both scrambled eggs and shrimp.

In addition, some cuisine may also add varieties of vegetables.

Although different countries have different ingredients when it comes to fried rice, its primary ingredients are cooked rice, vegetables, eggs, oil, and flavorings.

In addition to soy sauce, cross-contamination should also be considered.

During the process of harvest, shipping, and cooking, rice can be easily contaminated.

Similarly, materials used for fried rice can also be contaminated by other ingredients that contain gluten.

Most fried rice from restaurants contains gluten so it’s best to keep in mind possible traces of gluten that can affect your body.

Gluten is a protein found in most wheat, barley, and rye products.

These gluten proteins are responsible for dough’s elasticity and give bread the ability to rise during baking.

By now, you’d probably heard of the gluten-free diet which involves excluding dishes that contain any amount of wheat, barley, and rye.

A gluten-free diet aids in the management of celiac disease symptoms and other medical disorders connected with gluten consumption.

People who follow a gluten-free diet may find it challenging to avoid gluten entirely because it is mostly found in several ingredients which are commonly used in different dishes.

However, with our advancing technology, people can easily avoid gluten products, thanks to the availability of more gluten-free goods and labeling that more clearly identify foods containing gluten.

It is important to keep in mind that some cuisines have hidden gluten in their ingredients list, as consumers we should be wary of what we eat to avoid potential contamination that could affect your body. 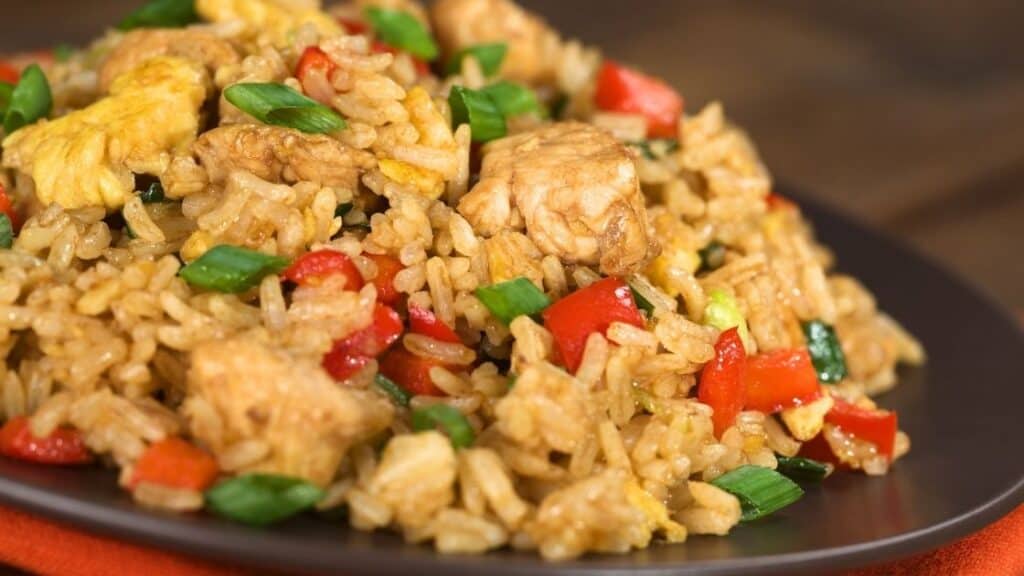 However, most Chinese dishes have gluten-containing ingredients.

Sadly, for people who are allergic to gluten, dishes that have soy sauce or oyster sauce should be avoided because it contains gluten.

Not only does it adds additional flavor during cooking, but it is also used as a seasoning and to make dips.

Its main ingredient is wheat, making it unsuitable for people with celiac disease or gluten intolerance.

Another Chinese food that has gluten is wheat noodles that contain wheat flour, water, and salt.

Dumplings, also a famous Chinese food are not gluten-free.

Dumpling dough is made typically made with gluten which naturally has gluten.

Fortunately, you can still enjoy Chinese food without the guilt and worry because there are a lot of alternative ingredients that are gluten-free such as rice or tapioca flour.

What Chinese Food Items Are Gluten-Free? 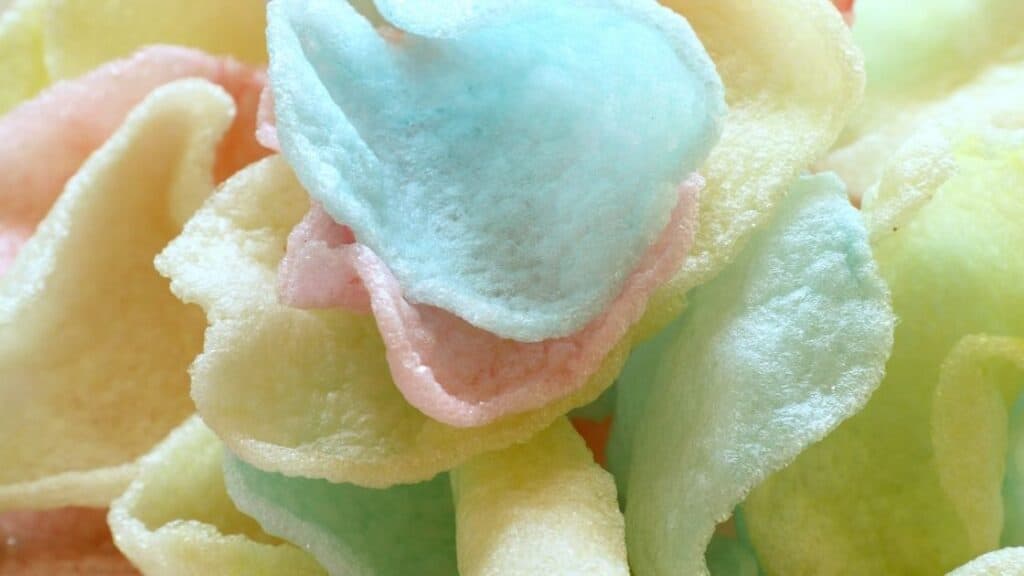 One of the most loved cuisines in the world is Chinese food.

Unfortunately, people who are allergic to gluten or switching to a gluten-free diet should be careful because most Chinese dishes are not gluten-free.

This is because some recipes contain soy sauce in their ingredient list.

Luckily, there are still Chinese food items that you can safely enjoy without worrying.

Here are some Chinese food items you should look for:

Prawn Crackers – Prawn crackers are fried chips and are usually used as a side dish.

These are considered gluten-free because it is made with tapioca flour and doesn’t include wheat flour.

It is one of the main ingredients as it goes well with a lot of ingredients.

Most of the oyster sauces we see in the market are made with oyster extract and wheat.

However, there are also some brands that use corn starch instead of wheat, therefore, making it gluten-free.

Just make sure that it’s prepared with corn starch or potato starch and not wheat flour.

Rice Noodle – Typically noodles are made up of wheat ingredients.

However, rice noodles are made from rice flour and water that have a subtle flavor and a chewy texture making them a safe alternative to wheat noodles.

To be safe, always ask questions about the ingredients and how the food is prepared.

It is also important to ensure that the food does not contain any hidden sources of gluten and that it is prepared in a clean pan and prepared on a clean surface.

Often in busy restaurants, pots, pans, and kitchen utensils are reused for subsequent dishes, and gluten might be present in your supposed “gluten-free” dish, albeit in small amounts.

If you have a slight gluten intolerance, you might not notice it much, but if you have a severe one or celiacs, a small amount of gluten might be enough for you to have a serious reaction. 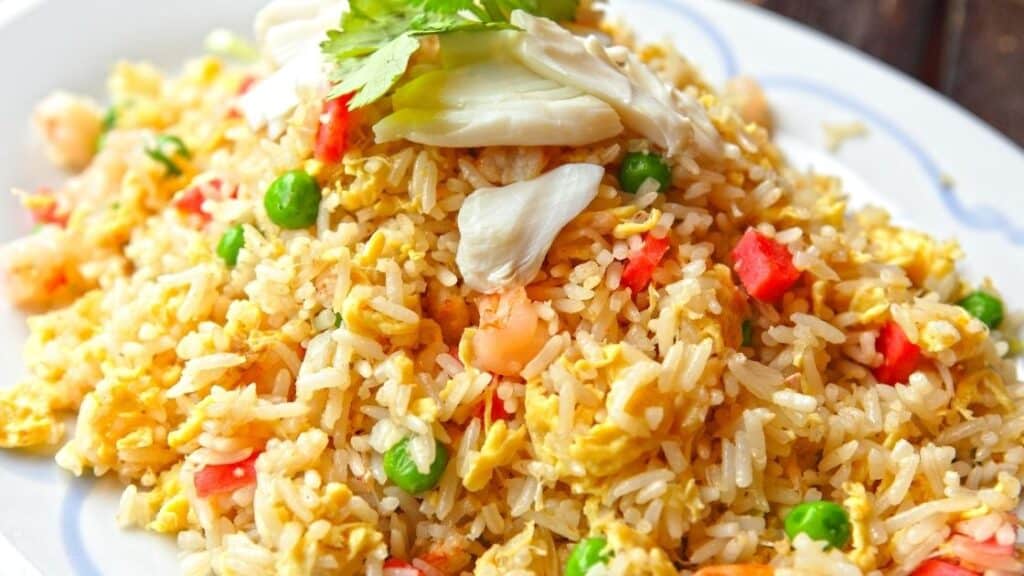 Sadly, most Chinese fried rice dishes are not considered gluten-free.

Although some ingredients are gluten-free such as rice, eggs, and vegetables, the majority of recipes call for flavorings and sauces that use wheat.

The use of non-gluten-free soy sauce in fried rice is a signature of Chinese cooking.

Almost every Chinese dish uses soy sauce as an added flavor to a recipe.

In most Chinese restaurants, fried rice is commonly seen on menus. Cooked rice, meat, and veggies combined with eggs, soy sauce, and garlic for flavor and seasoning are the essential components of Chinese fried rice.

You can ask for fried rice takeout without the soy sauce, but this is pretty risky, considering that the pots, pans, and kitchen utensils are likely to be contaminated from cooking other dishes containing gluten.

Fried rice is usually cooked using a Chinese wok to stir-fry all of the ingredients, and to ensure that the rice cooks uniformly and that the flavor is distributed equally.

You can try to make your own gluten-free fried rice.

Simply leave out the soy sauce and use salt or another gluten-free seasoning.

You can use any type of rice, but brown rice is a good choice because it’s rich in nutrients.

Next, be sure to use a non-stick pan or wok to prevent the rice from sticking.

If you’re using frozen vegetables, be sure to cook them before adding them to the pan.

Finally, add a touch of oil to the pan before cooking the rice.

This will help to create a crispy, golden texture.

When it’s finished, your gluten-free fried rice will be just as delicious as the original, and way healthier.