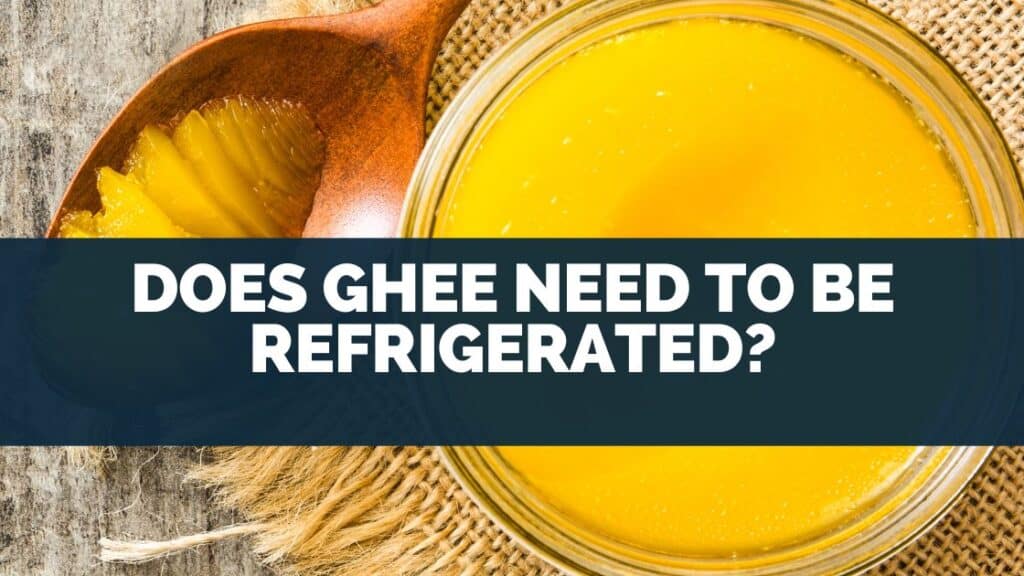 Ghee is a kind of clarified butter that has its roots in the Indian subcontinent and is commonly used in the area.

It was originally created to preserve butter, which is readily spoilable in the summer.

Ghee is produced by heating butter at a low temperature until all the water has evaporated, leaving just the milk solids and pure fat.

But does Ghee need to be refrigerated?

Unlike other milk-based products, this one has a very long shelf life because it doesn’t include milk or water that is prone to deterioration.

The milk solids are actually filtered off to leave only the pure fat ghee.

As a result, bacterial and mold deterioration is less rapid, and refrigeration is not needed as long.

However, ghee needs to be handled appropriately to increase its shelf life.

Keep it at room temperature, protected from light and moisture, and use a thoroughly dry spoon while removing ghee from the container.

Contamination or exposure to water or heat might shorten its shelf life and necessitate refrigeration.

It would be ideal for storing ghee in closed cupboards or cold, dry, dark areas of your pantry.

Although ghee, like other food products, has an expiration date specified by the manufacturer, many still use it after that date as long as its flavor and odor haven’t changed noticeably.

The expiry date is only a manufacturer’s estimate of the maximum possible time that they can guarantee their ghee to maintain the best taste.

Of course, if the ghee is beginning to exhibit the spoiled signs described below, it is better to toil it out.

Some signs of spoilage include visible mold, significant changes in color, foul smells, or a sour taste.

Go to top
Table Of Contents hide
1 How Long Does Ghee Last Unrefrigerated?
2 Should I Refrigerate Ghee After Opening?
3 Is Ghee Healthier Than Butter?

How Long Does Ghee Last Unrefrigerated? 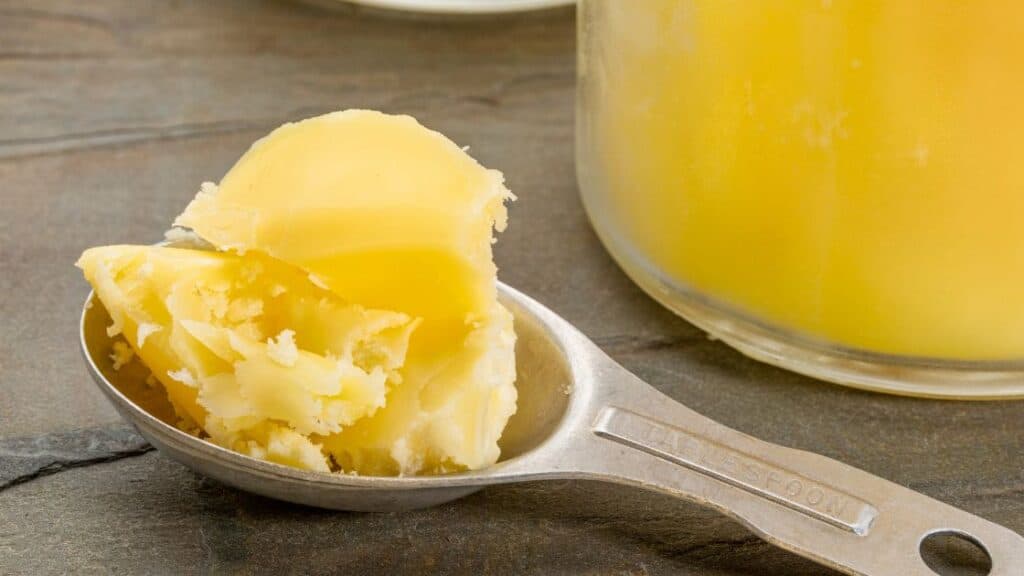 And depending on how you store it, a jar can remain fresh after being opened for 4 to 12 months, unrefrigerated at room temperature.

Homemade ghee can last between a few months to over a year, depending on how it is stored.

It is preferable to store homemade ghee in an airtight container away from heat, moisture, and light.

Ghee is a version of a butter product made to last longer at room temperature as the latter can easily get spoiled when unrefrigerated.

When it comes to choosing between ghee and butter, there are a few key factors to keep in mind.

First of all, ghee is made by clarifying butter, which removes the milk solids and water.

This means that ghee has a higher concentration of fat than butter, making it a more calorie-dense option.

However, ghee also has a higher smoke point than butter, which makes it better for cooking at high temperatures.

Additionally, many people believe that ghee is easier to digest than butter because the lactose and casein have been removed.

Finally, ghee has a richer flavor than butter, which some people prefer.

The history of ghee is shrouded in mystery, but it is believed to have originated in India over 3,000 years ago.

Ghee was first mentioned in an ancient Hindu text and has been used in Ayurvedic medicine for centuries.

Ghee is made by simmering butter until all the water evaporates and the milk solids have separated.

This process gives ghee a rich, nutty flavor and a high smoke point, making it ideal for cooking.

Ghee is a staple of Indian cuisine, but it has also gained popularity in the Western world in recent years.

Ghee is increasingly being used as a healthy alternative to other oils and butter, and it can be found in a variety of recipes ranging from savory dishes to desserts.

Whether you are looking to add some flavor to your cooking or you are searching for a healthier option, ghee is worth a try.

Should I Refrigerate Ghee After Opening? 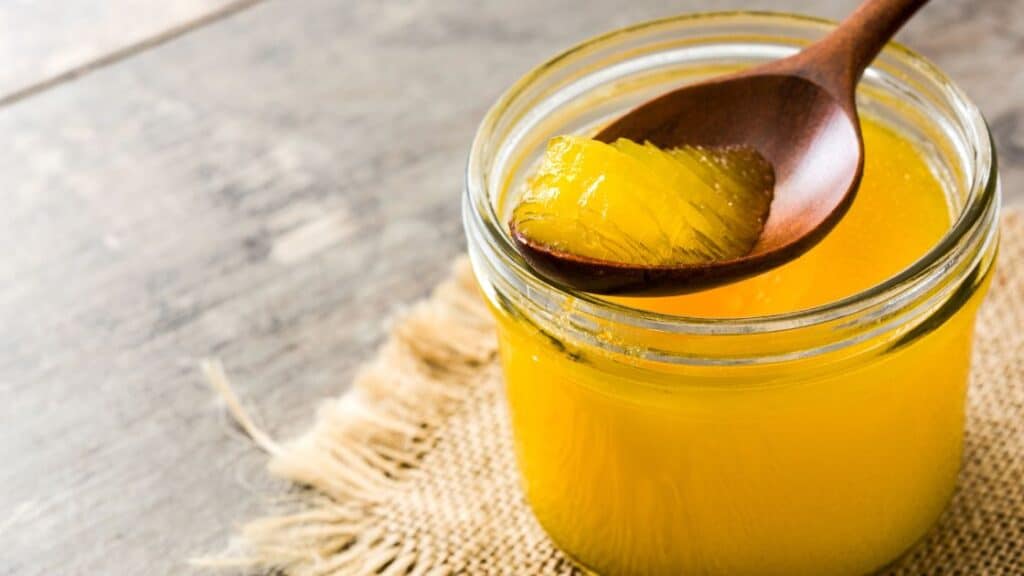 Like any food, refrigerated foods often last significantly longer than foods left out at room temperature.

A jar of opened ghee will last for over a year if refrigerated and about 4 to 12 months if left out at room temperature in an airtight container.

If you eat significant amounts of ghee, you don’t necessarily have to store it in the fridge, as an opened jar has a relatively long shelf life if stored away from moisture, heat, and light, even at room temperature.

However, if your consumption is low, feel free to stick it in the refrigerator for a few extra months of shelf life.

How long ghee stays outside the refrigerator depends on the ghee’s quality.

Purchasing ghee from a company that makes it with high-quality ingredients will assure its durability and long-term taste retention.

Ghee, also known as clarified butter, is a staple in Indian cuisine.

It is made by slowly simmering butter to remove the water and milk solids, resulting in a rich, nutty-tasting oil.

Ghee has a high smoke point, making it ideal for frying and sautéing, and it also lends a delicious depth of flavor to dishes.

Perhaps most importantly, ghee is rich in vitamins and minerals, including vitamin A, vitamin E, and omega-3 fatty acids.

While ghee can be stored at room temperature, it will last much longer if refrigerated.

Ghee can develop rancidity when exposed to heat and light, giving it an unpleasant flavor.

Refrigerating ghee helps to prevent this from happening.

In addition, ghee that has been refrigerated will solidify, making it easier to measure and use in recipes.

Is Ghee Healthier Than Butter? 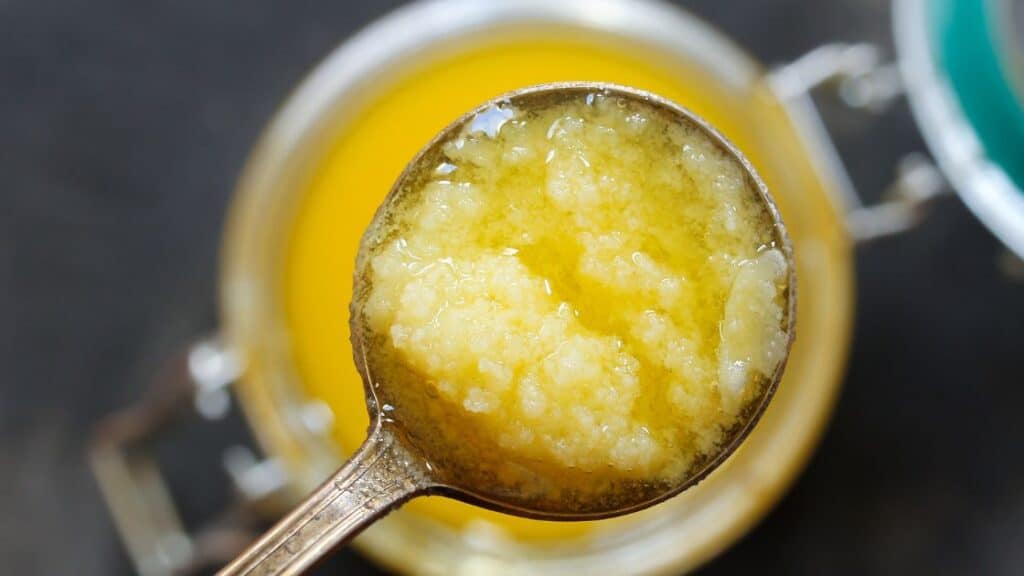 Whether ghee is healthier than butter is a subject of widespread debate these days.

They both have a relatively similar nutritional profile, and ghee lacks certain nutrients in substantial concentrations to have the health benefits that is purported

Butter is a product made of fat and milk proteins obtained by churning the cream of bovine milk.

Ghee is a variation of butter, also called clarified butter, that is obtained by evaporating the water content of the butter and straining off the milk solids, resulting in only pure liquid fat.

Although this process makes the ghee more concentrated in fat than butter, the difference in the calories and fat content is not very significant between the two.

Because both goods are not considerably different in most of the components, including calories and fat, as shown above, choosing one over the other doesn’t actually make a difference in their health impact.

Ghee has been shown to contain butyric acid, a short-chain fatty acid generated in enormous quantities by probiotic bacteria in human bodies.

This compound has been credited with one of the ghee’s many health benefits as a key energy source for colon cells.

However, it has been shown that this short-chain fatty acid is also present in butter but in significantly lower concentrations than ghee.

Another difference in their nutritional profiles is that ghee has almost no quantities of lactose and casein compared to butter.

As a result, for those who are lactose intolerant or allergic to milk, ghee may be an acceptable dairy-based substitute to butter.