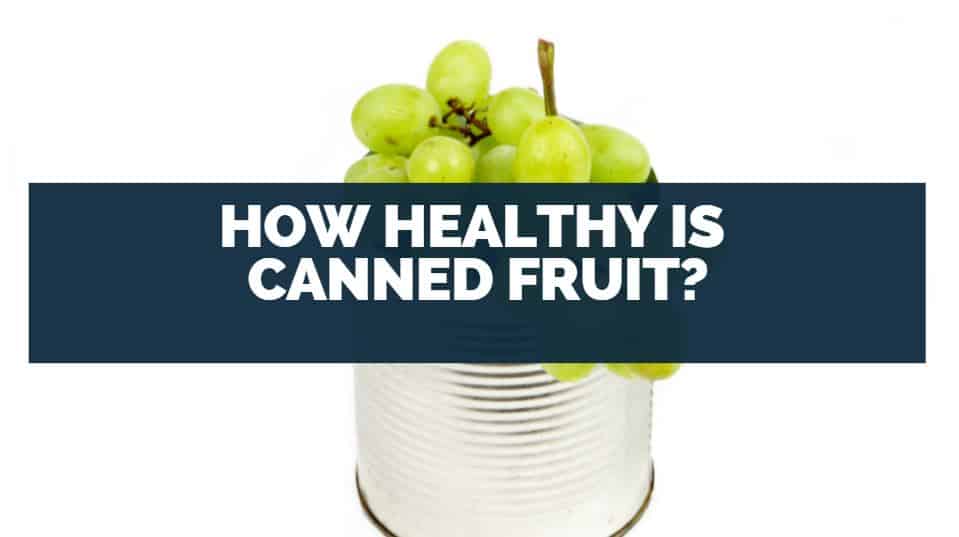 Buying canned fruit can be a very convenient option, compared with fresh fruit, and the likelihood of fresh fruit wastage

But, I wanted to know whether the convenience of canned fruit would be as healthy as fresh fruit.

As a general rule, canned fruits have the same amount of nutrients as fresh or frozen fruit.

However, minor differences in nutrients can be present in certain fruit and certain producers tend to add syrups, and sugars which add flavor but also calories.

Fresh fruit is the healthiest option because it is unspoiled by the production chain, however, canned fruits can be a more cost-effective solution. It’s great to always have some canned peaches in the pantry anyway.

Below, I will explain how long canned fruit lasts once it has been canned and after it’s expiry date.

As well as, how to tell if canned fruit is still good to eat.

Go to top
Table Of Contents show
1 How Long Will Canned Fruit Last?
2 How Long Are Canned Goods After Expiration Date?
3 How Long Can You Keep Canned Peaches?
4 How Do I Know if My Canned Peaches Are Bad?
5 Is Canned Fruit the Same As Fresh Fruit?
6 What Are the Healthiest Canned Foods?
7 What Is Bad About Canned Food?
8 Can You Eat Food Straight Out of a Can?

How Long Will Canned Fruit Last? 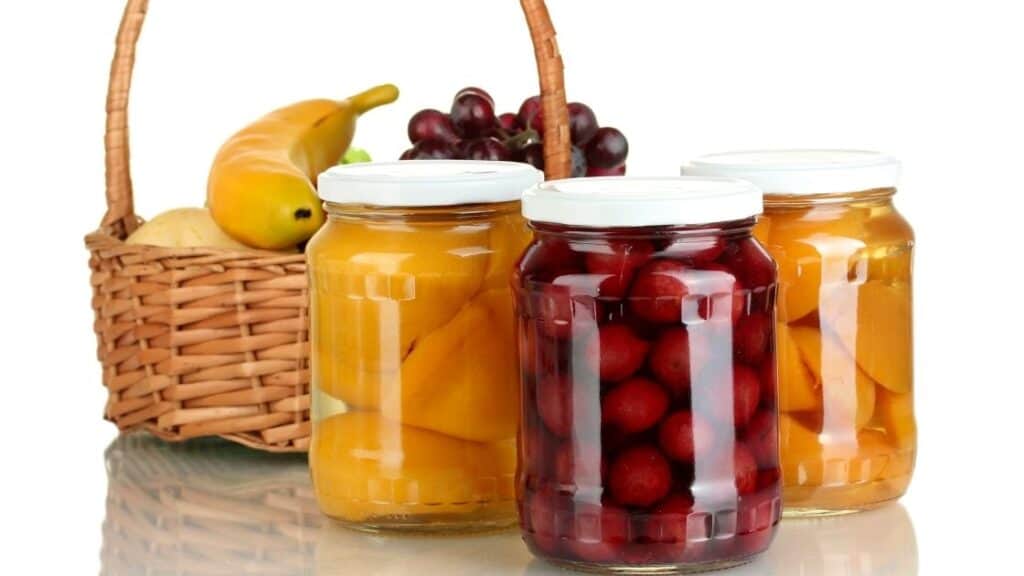 I’ve always found canned fruit awesome to eat, because you simply open it up and it’s all ready to go.

Canned fruit will last anywhere from 18 months to 5 years.

Acidic fruit like oranges and pineapple are extremely fresh for 18 months.

However, low acid fruit such as papaya or apples will stay very fresh for 2 to 5 years.

However that’s as long as the can isn’t damaged, or heated and cooled too fast.

If the can is stored in a sunny room, or a very hot attic the heat can cause the food to spoil quicker.

It’s a similar case if there are extremes in temperature.

For example, if it’s very hot during the day and very cold at night.

Therefore, it’s best to keep canned food in the pantry, or somewhere out of direct sunlight.

As well as, not keeping above a stove top.

How Long Are Canned Goods After Expiration Date? 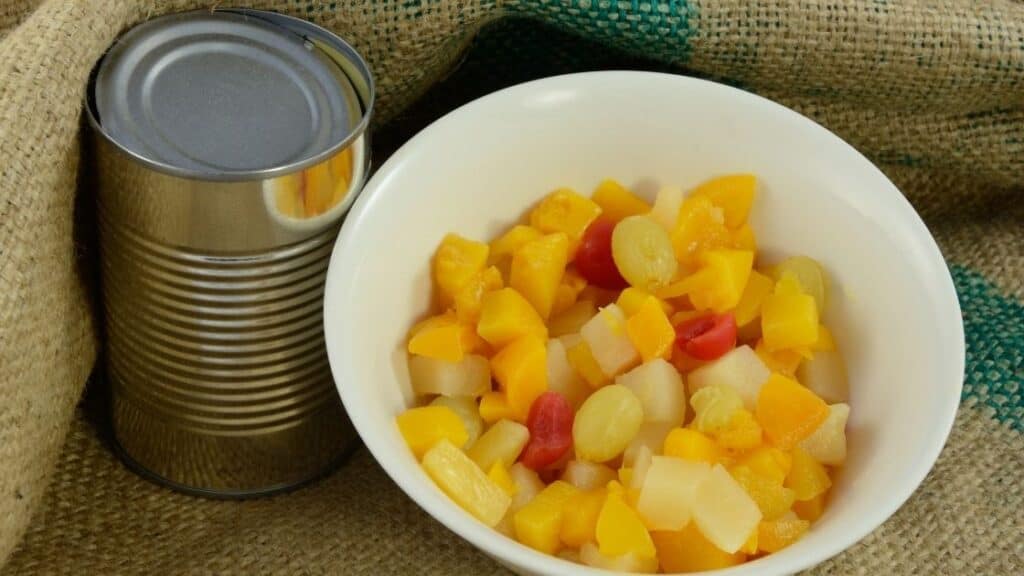 Another common question is how long canned food will last after they expire, and can you still eat expired canned food.

Overall, canned goods can last virtually forever provided the can is not punctured, rusted, or heated and cooled too quickly.

No air can get in which is required for bacteria to begin to grow, and as a result the food never goes bad.

The main thing to do to test if canned food is still good is to smell and taste it.

If it still smells and tastes ok it’s generally fine to eat.

If cans are kept near water they can begin to rust.

The process does take an extremely long time.

However, it’s best to avoid keeping the cans wet for any extended period of it.

Canned food is quite heavy to lug around, therefore, most people keep it in one place.

Therefore, it’s quite rare you’ll accidentally puncture a can of food.

How Long Can You Keep Canned Peaches?

I’m a big fan of peaches, but my tree only fruits for 2 weeks out of the year.

And I can’t eat all of the fruit before it falls to the ground, and rots, and/or the birds get it.

So, I was curious whether canning is a good option and how long will they last?

Canned peaches will retain a fresh taste for 2 to 5 years.

After that, they are still edible virtually forever, however, you can experience some degradation in taste.

Canned peaches are an excellent way to preserve peaches to enjoy year-round.

Canned peaches are typically peeled and then placed in a mason jar or can.

After that a syrup made from water of sugar is poured over top.

Then the can or jar is sealed, forever locking in the goodness.

How Do I Know if My Canned Peaches Are Bad? 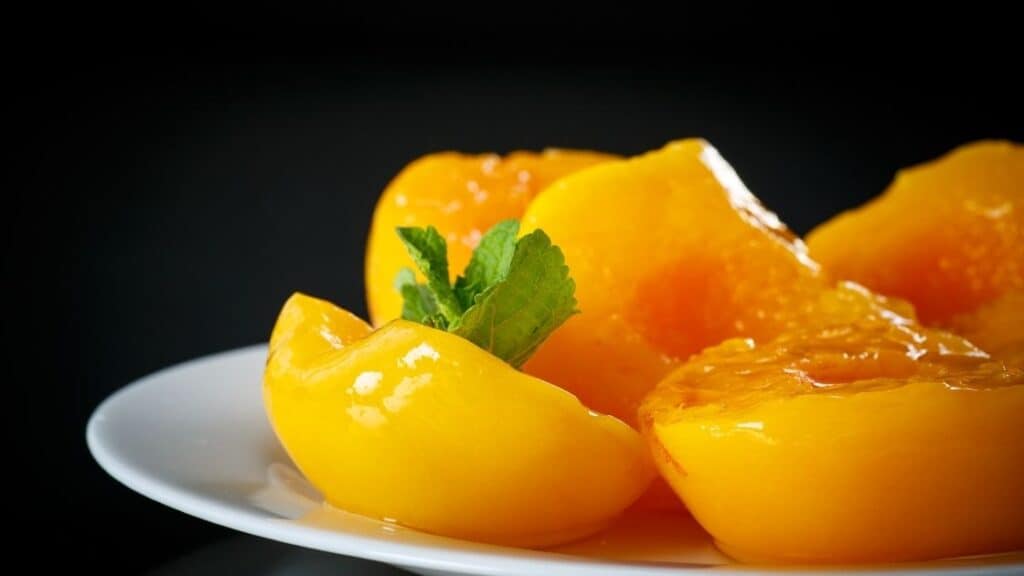 Canned food can float around the bag of the cupboard for years and you might have discovered a can with a faded label.

Or, you may just be concerned that your canned peaches aren’t quite right.

Here’s how to know if your canned peaches are bad…

Bad canned peaches will have a bad odour and taste.

If the can is rusted you should also not eat it as you risk consuming some rust.

There can be dents in the can, however, if the can is ruptured typically the canned peaches will spoil within a week at room temperature.

The same is true of an open can of canned peaches.

However, it’s best to transfer peaches from the can into a bowl or container to make them easier to store alongside other food.

Otherwise, it’s easy for the can to tip over.

Is Canned Fruit the Same As Fresh Fruit? 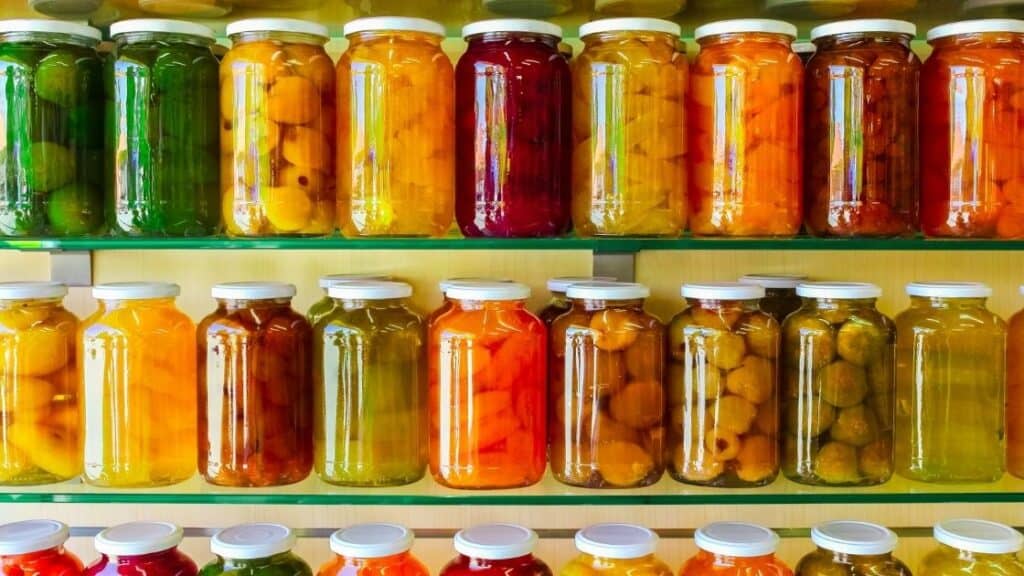 Canned fruit is super convenient but I had a suspicion that it isn’t as healthy as fresh fruit because it isn’t as fresh.

So, I researched whether it is, and here’s what I found.

Overall canned fruit is the same as fresh fruit.

Fresh fruit technically has the highest amount of nutrients and is preferred, however, there is only a minor difference in the nutritional quality of canned fruit compared to fresh fruit.

Certain canned fruit can be boiled before it’s canned.

In that case fresh fruit is definitely healthier than canned fruit made from fruit that has been boiled.

Therefore, it’s a good idea to use a recipe where you don’t boil the fruit prior to canning it.

Or, read the label on canned fruit before buying it to see how they make it.

What Are the Healthiest Canned Foods? 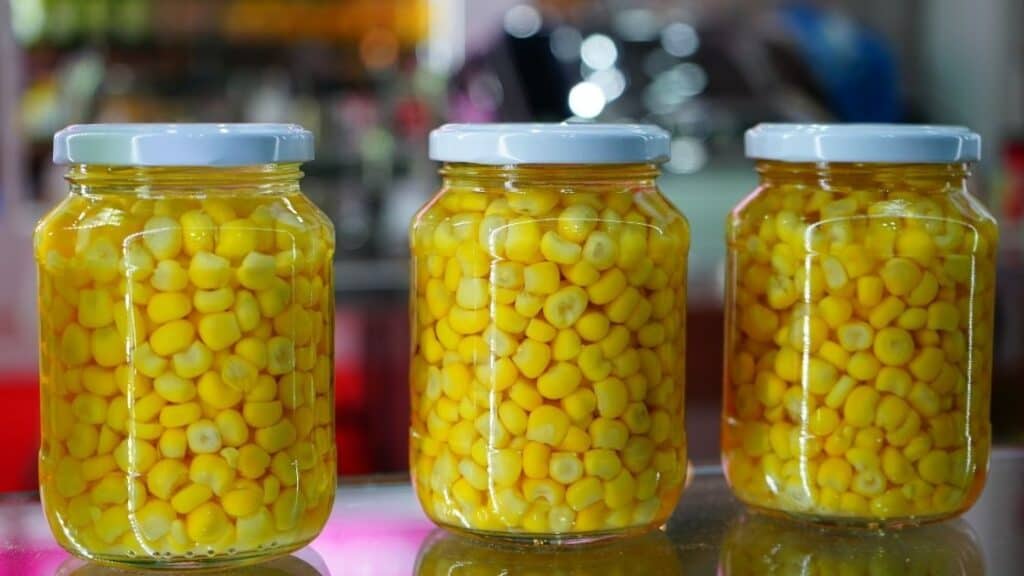 There is a wide array of canned food to choose from, so I wanted to know what some of the healthiest options are.

As a general rule, canned food high in fruits or vegetables is the healthiest.

However, typically you need to combine the healthiest canned foods with pasta or rice to make a complete meal.

However, chilli beans can be made into nachos by heating them in a saucepan or microwave and then adding them on top of nacho chips.

After that, top it with some sour cream, and some grated cheese.

Canned foods that attempt to emulate a recipe such as butter chicken, or beef stew typically fall short in how much meat they have.

And it’s easy to tell that the homemade recipe is much better.

However, they are still generally very tasty and satisfying when combined with a side dish such as rice or pasta.

Some come in a larger can size that is better suited to being eaten as a single meal, but most people will find that they could easily eat two in one meal if you eat it on it’s own.

What Is Bad About Canned Food? 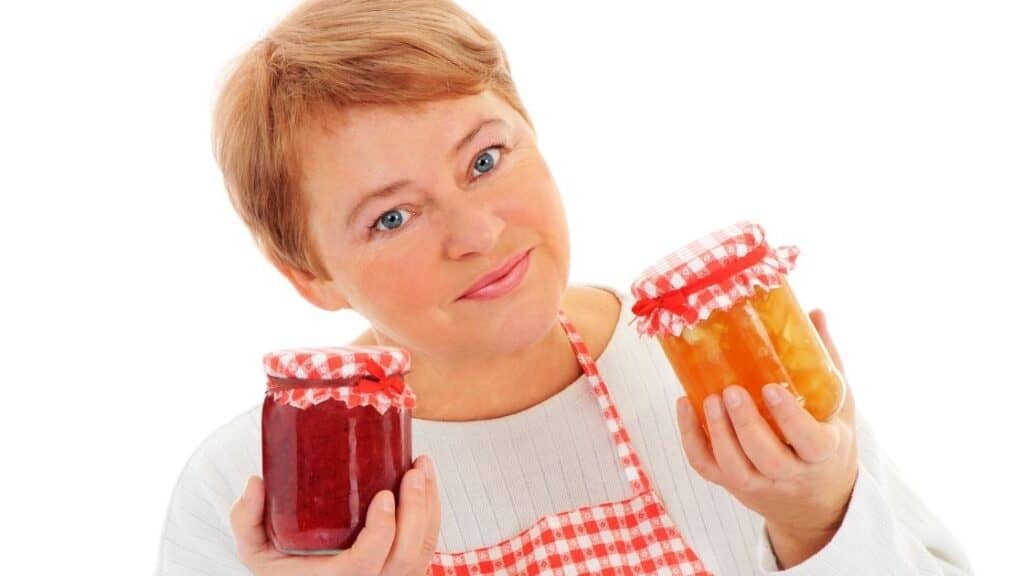 So, canned food tastes pretty much the same as fresh food but are there any drawbacks to canned food?

The only thing bad about canned foods is that some brands can contain high amounts of sodium.

Therefore, you should get a type that will make sure you’re within the recommended amount of daily sodium.

It’s usually stated as a percentage on the can.

Too much sodium in your diet can be bad for your health over the long term.

However, this is common for both canned food and mason jars.

Once the can has been open it’s generally advised to consume it within 7 to 14 days if left at room temperature.

Or, within 30 days if you keep it in the fridge.

It’s also a good idea to smell and taste test canned food before eating it.

As in warmer climates, food can tend to spoil more quickly.

Can You Eat Food Straight Out of a Can? 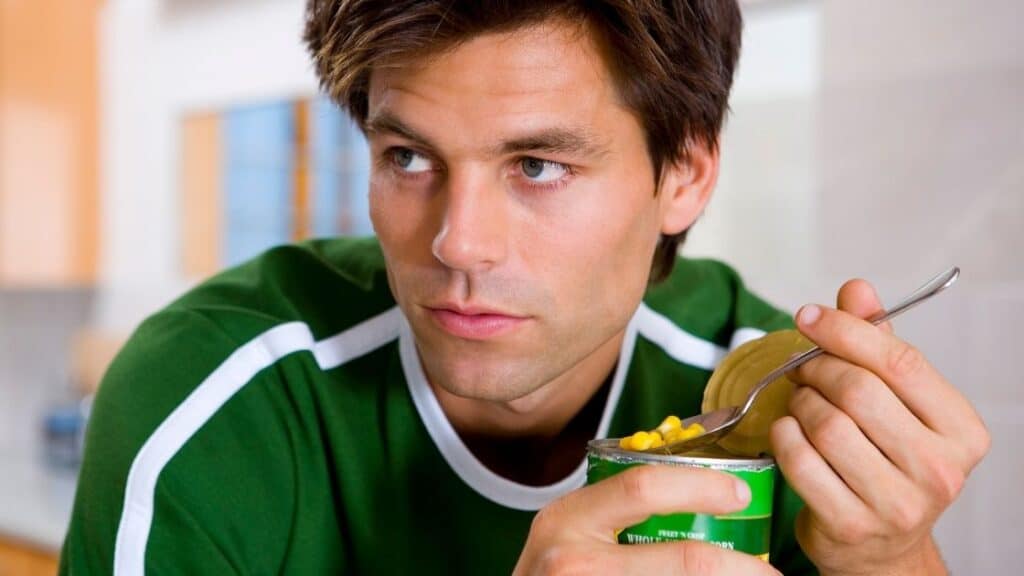 Canned food is ready to eat, therefore it makes sense that you can eat it straight out of the can.

But, am I right in assuming that? I looked into it and here’s the answer.

Canned food can be eaten straight out of the can.

A spoon is also not required for certain types of canned food as you can pour it straight into your mouth.

But, food such as canned tuna or spam needs something to loosen it up enough to come out.

If you’re low on utensils for example if you’re camping then you can use a sturdy twig.

It can be difficult to eat the food at the very bottom of the can because it can stick and will only come out if you soften it up with some water.

There is a wide array of different canned food which include side dishes such as mixed vegetables.

You generally don’t eat certain types of canned food on their own.

However, it’s also fine to pour them into a bowl or use them as an ingredient in a dish straight from the can.

Certain canned foods are already good though, so bear that in mind if you are reheating them.

You don’t necessarily have to cook them all the way through but rather you’re simply reheating them.

Canned fish as an example is typically always steamed and then canned.