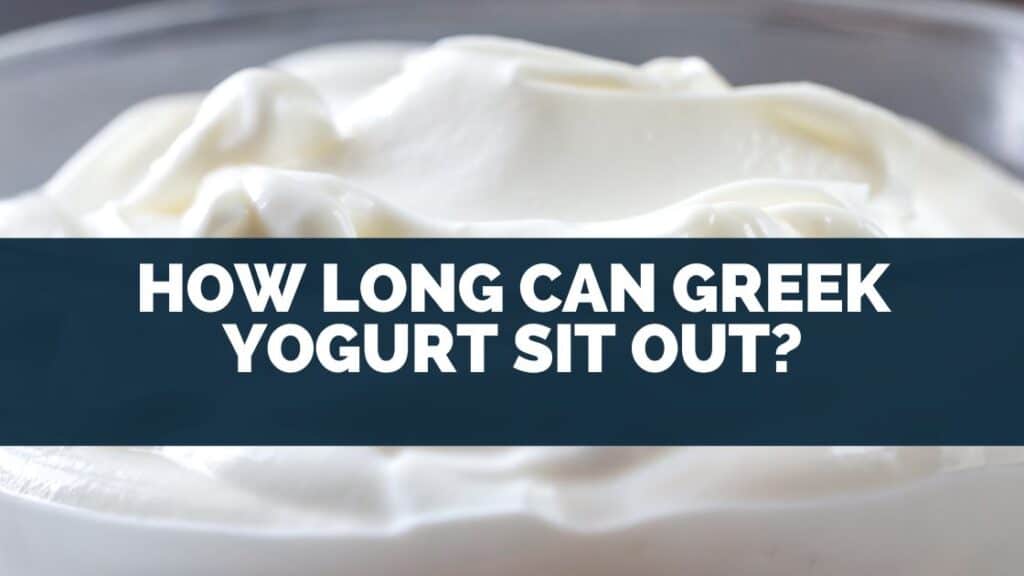 Greek yogurt is a fermented food, which means that it contains live and active cultures.

These beneficial bacteria are what give yogurt its distinctive flavor and texture.

They also help to keep the yogurt fresh by breaking down lactose and other sugars.

However, live cultures are also sensitive to temperature changes.

If Greek yogurt is left out of the fridge for too long, the live cultures can begin to die off, affecting both the taste and shelf life of the yogurt.

Generally speaking, Greek yogurt can be left at room temperature for up to two hours without significant quality loss.

After that, it’s best to put it back in the fridge.

Of course, if it’s a hot day or your yogurt is sitting in direct sunlight, you’ll want to put it back in the fridge sooner rather than later.

While you need to be cautious when eating a greek yogurt that has been sitting out, yogurt has many health benefits!

The balance between sodium and potassium in your body maintains blood pressure physiologically.

Blood pressure can be reduced by fermented milk with probiotics.

It is essential that bones are strong and healthy by consuming calcium.

Calcium and other components make up most of our bones.

Due to its calcium content, Greek yogurt is beneficial for bone health.

As well as reducing the risk of osteoporosis, it also acts as a preventative measure.

A rich source of protein

There is a significant increase in protein content in Greek yogurt compared to milk.

As you age, it assists in maintaining muscle mass.

Probiotics can be found in Greek yogurt in large quantities.

Our gut is stuffed with good bacteria that help to kill harmful bacteria and maintain a healthy gut environment.

In addition to treating diarrhea and boosting immunity, probiotics are often used to treat diarrhea.

The gut-brain axis has been shown to improve brain function through probiotics in some clinical studies.

You need iodine in your body to function properly, and Greek yogurt is rich in it.

Thyroid glands require iodine to function properly, and the thyroid is responsible for regulating body metabolism.

Weight gain is caused by an iodine deficiency, and adding Greek yogurt to your diet can boost your metabolism and keep you at a healthy weight if you consume the right amount of iodine-containing foods.

Go to top
Table Of Contents show
1 Is Greek Yogurt Ok If Left Out Overnight?
2 What Happens If You Eat Yogurt That Was Left Out?
3 How Long Can Yogurt Sit Out Unopened?

Is Greek Yogurt Ok If Left Out Overnight? 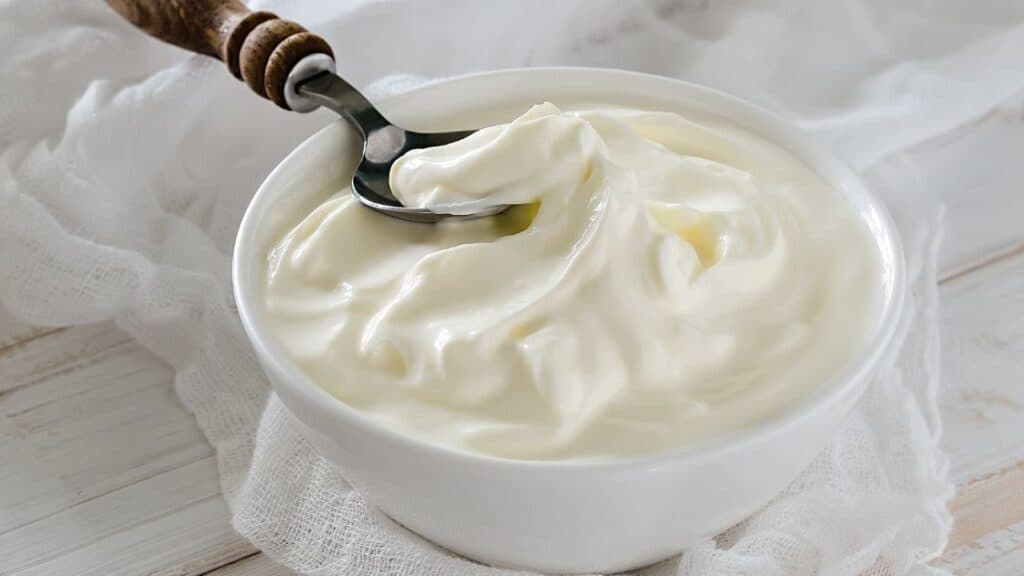 The short answer is yes, it is usually still safe to eat.

Yogurt is a fermented food, which is made by adding bacteria to milk.

This bacteria helps to break down the lactose in milk, resulting in a thicker, tangier product.

However, this doesn’t mean that yogurt can’t go bad.

If yogurt is left out at a temperature above 40 degrees Fahrenheit for more than two hours, the bacteria may start to grow and produce toxins that can make you sick.

For this reason, refrigerating yogurt right after purchase is always a good idea.

So there you have it – Greek yogurt is generally safe to eat if it’s been left out overnight.

Just be sure to refrigerate it as soon as possible to minimize the risk of food poisoning.

What Happens If You Eat Yogurt That Was Left Out? 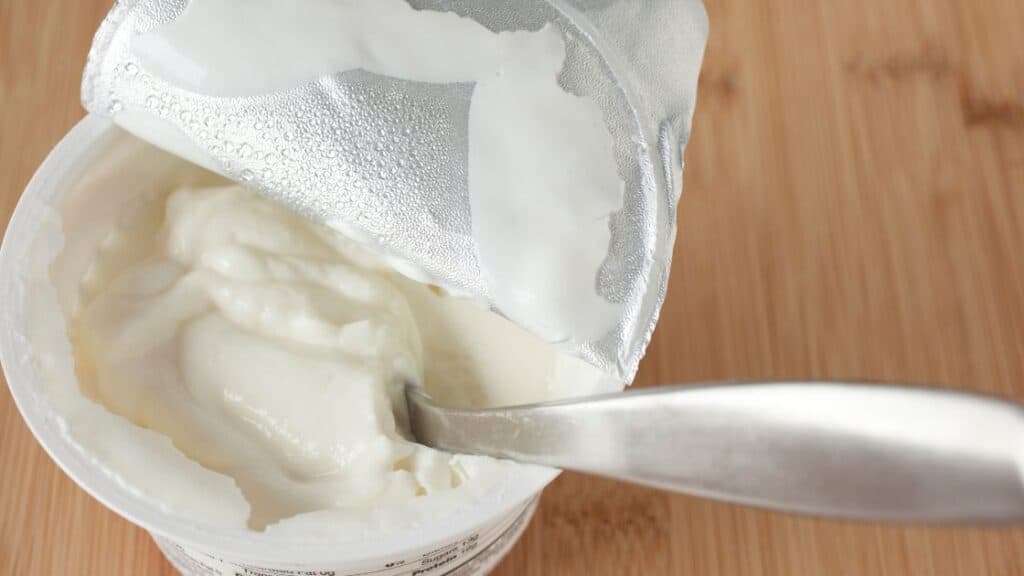 While yogurt is a fermented food that is more resistant to spoilage than milk, it is still sensitive to heat.

If you heat yogurt that was previously refrigerated, it can cause bacteria to grow and make you sick.

The same goes for exposing any dairy product, like milk or cheese, to heat.

The USDA says you should throw it away if it’s been sitting at room temperature for more than two hours.

If it’s been less than that, you can put it back in the fridge and hope for the best.

But even then, it’s not guaranteed to be safe to eat.

If you’re not sure, it’s better to err on the side of caution and toss it out.

After all, nobody wants to spend their lunch break running to the bathroom!

How Long Can Yogurt Sit Out Unopened? 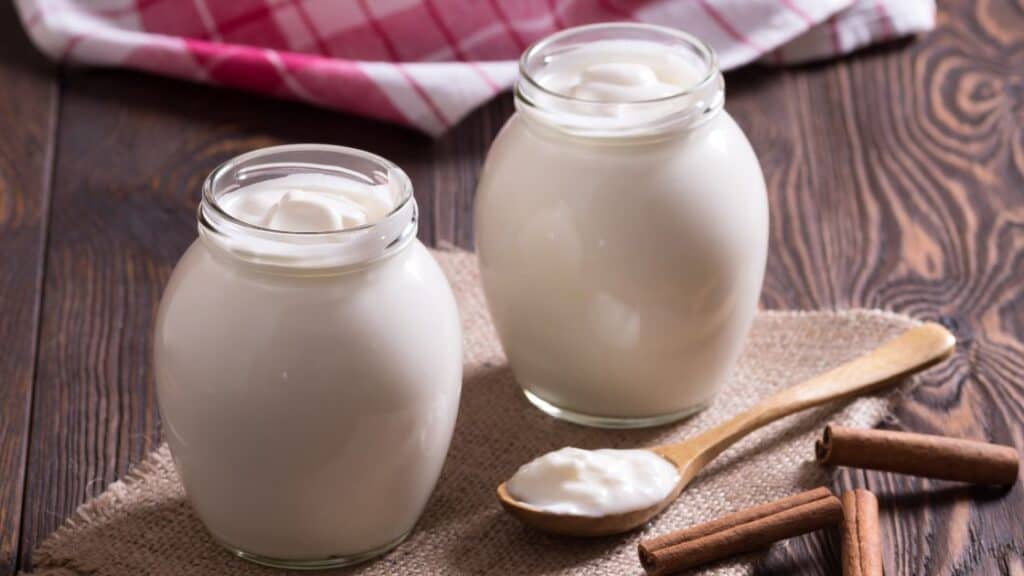 When it comes to yogurt, there are a lot of differing opinions on how long it can sit out unopened.

Some say that you’re in the clear as long as it’s below 40 degrees Fahrenheit.

Others believe that yogurt is only good for a few hours after being removed from the fridge.

So, what’s the truth?

The answer really depends on the type of yogurt you’re talking about.

For example, Greek yogurt is much thicker than regular yogurt, and as a result, it can usually last longer without being refrigerated.

On the other hand, regular yogurt is made with more water, which means that bacteria can grow more quickly.

Ultimately, it is best to avoid microbial growth by consuming yogurt within two hours of taking it out of the refrigerator.

Once opened, yogurt should be treated like any other perishable food and consumed within seven days.

You’ve probably been there before – you come home from work, or maybe you’re just getting out of bed and looking for a snack.

You open the fridge door, and there it is, a tub of yogurt that’s been sitting out on the counter overnight.

It’s tempting just to grab a spoon and dig in, but you can’t help but wonder: is it safe to eat yogurt that’s been left out?

It turns out that the answer isn’t black and white.

While yogurt is made with live bacteria cultures that can help to promote gut health, those same bacteria can also cause food poisoning if they start to multiply too much.

That’s why it’s generally not recommended to eat yogurt that’s been sitting out at room temperature for more than two hours.

However, if the yogurt has been stored in a fridge that’s set below 40 degrees Fahrenheit, it should be safe to eat for up to seven days.

So if you’re ever in doubt, do the prudent thing and throw it out.

When eating expired yogurt, you may also experience abdominal cramps.

It may take hours to days for symptoms of infection to appear after consuming contaminated food, but this depends on how much bacteria has been consumed and what type of bacteria it is.

In case of abdominal cramps following eating expired yogurt within a couple of hours or days, the yogurt may have caused the cramping.

When expired foods are consumed, such as yogurt, vomiting can occur.

When vomiting is prolonged, electrolyte imbalances, dehydration, and physical weakness can occur.

You should contact your doctor immediately if you experience vomiting or other related symptoms after eating expired yogurt.

A physician should be consulted if you experience difficulty keeping liquids down, vomiting or pooping blood, experience extreme pain, experience diarrhea for more than three days, or experience an oral temperature exceeding 100.4 degrees Fahrenheit.

Have you ever eaten yogurt that’s past its expiration date? If so, you may have wondered what would happen if you ate expired yogurt.

While yogurt can be generally safe to eat, even after its expiration date, there are a few things to keep in mind.

For one thing, expired yogurt may not taste as fresh as it did when it was first purchased.

Additionally, the texture of the yogurt may change, and it may become more watery.

However, these changes are usually not harmful, and expired yogurt is still an excellent source of protein and calcium.

Several types of foodborne illnesses can happen when food is improperly handled.

Also, bacteria accumulate on yogurt that is not properly preserved or aged.

As the body attempts to eliminate harmful toxins from expired yogurt, diarrhea is a common symptom that follows consumption.

Ensure that the expiration date on the yogurt packaging is up to date, and do not consume it after that date to prevent this reaction.

Drink plenty of fluids if you suffer from diarrhea to prevent dehydration.

You might be surprised to learn that food poisoning is actually quite common.

In the United States alone, there are an estimated 48 million cases of foodborne illness each year.

That means that about 1 in 6 people will suffer from food poisoning at some point.

Symptoms of food poisoning can range from mild to severe, appearing anywhere from a few hours to several days after eating contaminated food.

Some of the most common symptoms include nausea, vomiting, and diarrhea.