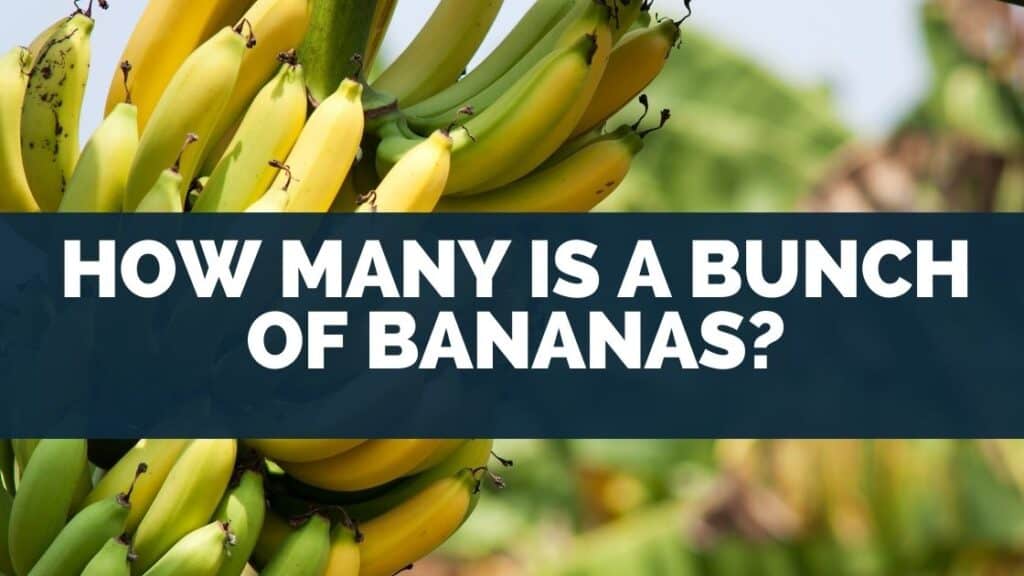 I use the word bunch a lot to talk about a lot of something.

But I typically call a group of bananas “some bananas”, rather than a bunch of bananas.

So, I was curious about the grammatically correct way to refer to more than a few bananas.

And to understand what people mean when they ask, How many is a bunch of bananas?

As a general rule, a bunch of bananas is more than 3 bananas that are all connected on the same stem.

The word bunch is used to refer to a group of things that are connected by a stem.

Other examples are a bunch of grapes where the individual grapes are all connected to the same main stem.

Whereas a single banana is just called a banana.

Sometimes, a group of bananas is called a hand, and there are also some other descriptive words used to describe bananas such as a comb.

In this article, I will explain the different words used to describe individual bananas, and groups of bananas, and what words are used commonly to describe bananas in an academic setting and in everyday use.

Go to top
Table Of Contents show
1 Why Is a Bunch of Bananas Called a Hand?
2 What people call groups of bananas in everyday speech?
3 Is a Comb of Bananas Correct?

Why Is a Bunch of Bananas Called a Hand? 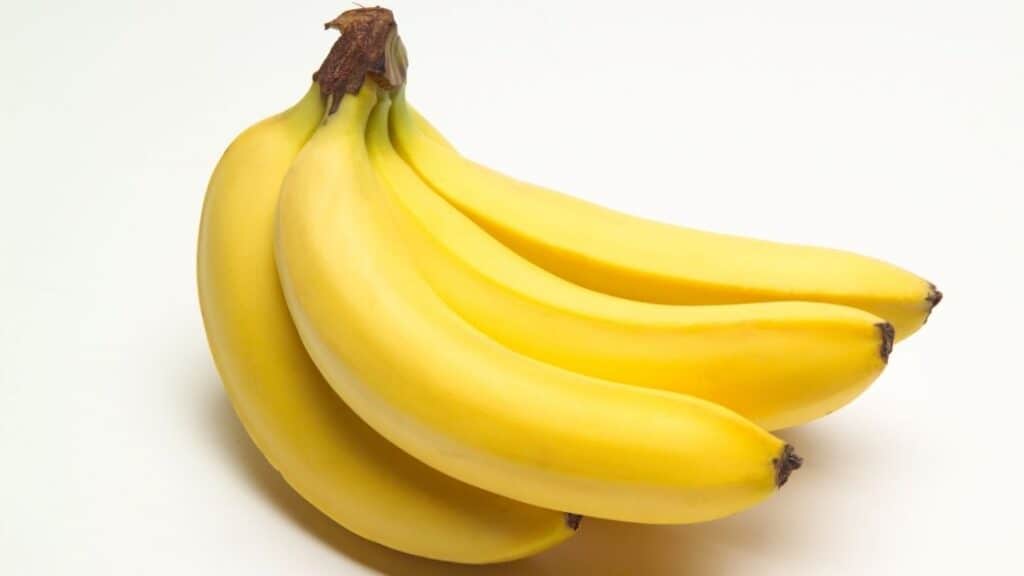 A bunch of bananas is sometimes called a hand of bananas. It seems like a bit of a funny word to use, so I’m interested in why it’s called that…

A bunch of bananas is called a hand because it looks like a human hand.

The stem of each individual banana connects to a solid piece of the banana stem, which is very similar to where the fingers meet the palm of your hand.

But, most hands of bananas contain more than 5 fingers.

Typically bananas are sold in a bunch of 8.

And all of them are connected to the same main stem.

If you rest your hand on your knee in a natural way, it looks very similar to how a bunch – or hand – of bananas looks when you place it on say your kitchen bench.

Whether your hand or the hand of bananas are palm up or palm down!

It’s important to note that when talking normally at a fruit and veg store or at the supermarket, sometimes people will use the word bunch instead of the word hand.

Because in everyday speech, people rarely use the word hand to refer to a group of bananas.

What people call groups of bananas in everyday speech? 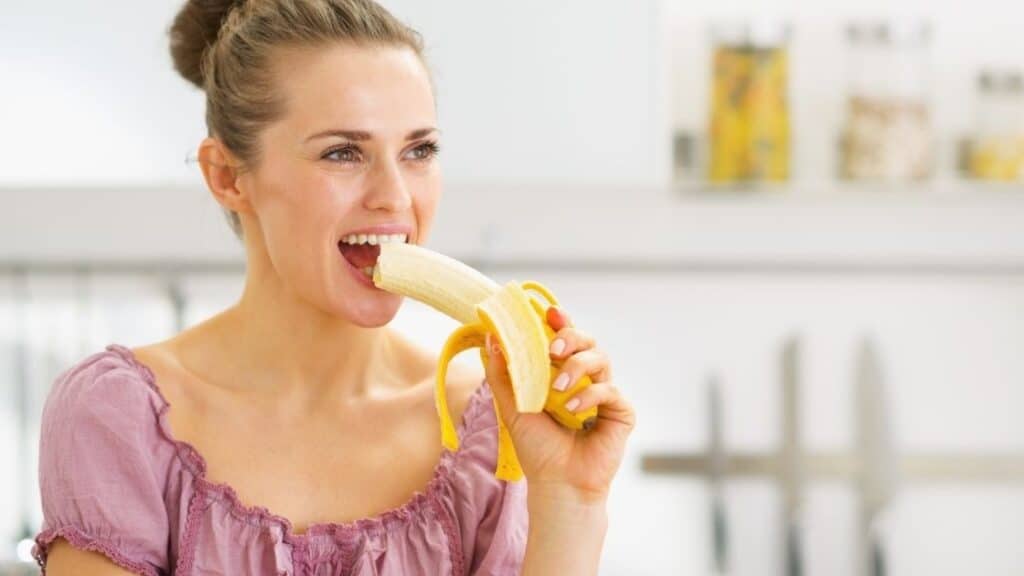 In everyday speech though, most people will just say ‘some bananas’. You may say “do you want to get some bananas?”.

And the response would say something like “yes, how many should we get.”

In everyday speech, it is not typical for a person to reply with “a bunch” or “a hand”.

But, you could say ‘can you grab me 1 bunch of bananas?.

They still might be confused and ask how many you want to get.

The distinction between a hand of bananas and a bunch of bananas becomes important at a banana plantation.

At a banana plantation, to get your message across clearly it’s important to use different words for a hand of bananas and for the whole stalk that contains many different hands or bunches of bananas.

As it’s relevant to the way that bananas are harvested.

When bananas are harvested most people will cut the stem using a machete from the very top while they hold the banana in one arm.

Some people also hold the banana from the bottom as they cut it and allow the top of the stem to fall sideways and bounce gently on the ground.

After that the bananas can be transported as one big stem, or they can be further cut into the hands of bananas.

Which are also sometimes called bunches of bananas.

So, if people are breaking down a stalk of bananas into individual hands or bunches, you would need to use different words, otherwise, the people you’re with will get confused.

Is a Comb of Bananas Correct? 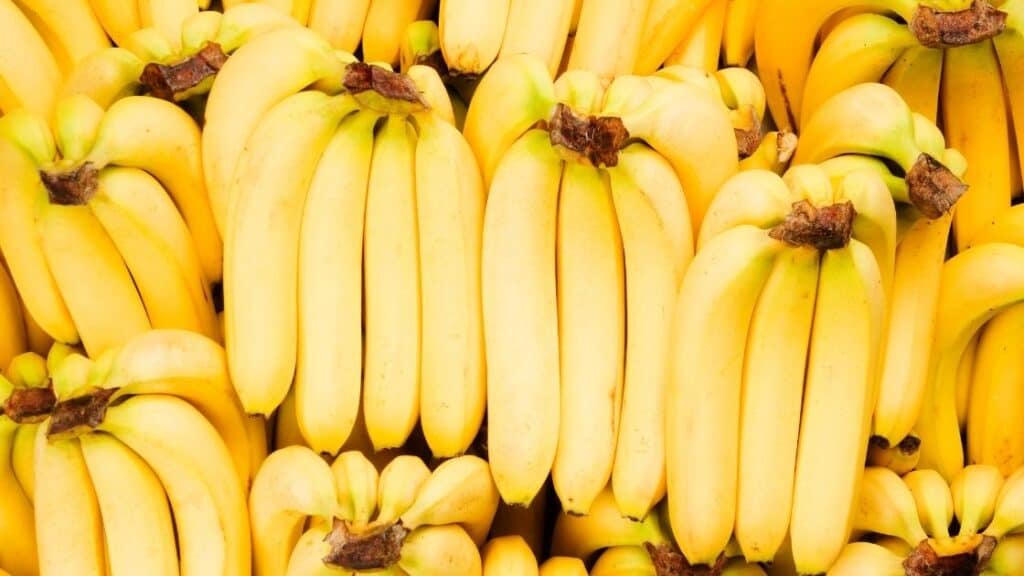 I’ve heard the term comb used to talk about a bunch of bananas.

But, I was curious about whether it’s grammatically correct to say or write “a comb of bananas” to mean a bunch or group of bananas.

Generally, a comb of bananas is a very uncommon way to describe a group of bananas. Virtually all native English speakers will be confused if you use the word comb to refer to a bunch or a hand of bananas.

However, in certain regions, people may use the word comb.

It’s unclear where people say a comb of bananas instead of a bunch in the world.

But, I think it’s easy to see how it could catch on.

Once, the boss or manager at a plantation starts calling a bunch of bananas a comb, then all of the employees would start calling it a comb as well.

But, when they go to another city or another country and say a comb of bananas, people wouldn’t know what they mean.

For example, people in the south of the city pronounce the ‘th’ in words as an ‘f’.

However, in the north and in certain other parts of the country very few people use an ‘f’ instead of ‘th’.

Therefore, the comb is very localized, and a native English speaker will virtually always refer to more than one banana as a ‘a few bananas’ or a ‘bunch of bananas’.

Interestingly, as a native English speaker, I can also say that I have never heard anyone refer to a bunch of bananas as a hand of bananas in everyday speech.

However, in scientific or academic settings, a hand of bananas is used to refer to the distinct clusters of bananas that can be separated from the stalk and are all attached together.