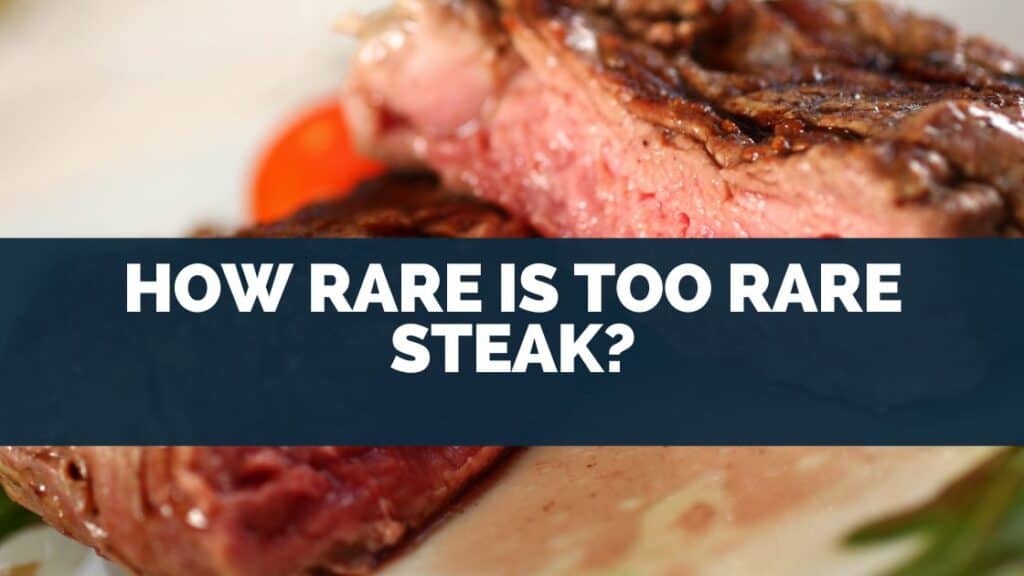 The debate over how rare steak should be cooked has raged on for years, with no clear consensus in sight.

Some people prefer their steak well-done, while others prefer it rare or medium-rare.

However, there is more to this debate than simply personal preference.

Cooking steak to different levels of doneness can impact its flavor, texture, and nutritional content.

But, how rare is too rare steak?

There are a few general guidelines that you can follow.

Medium-rare steak should be cooked until it is pink in the center, with a slight char on the outside.

A rare steak should be cooked until it is red in the center, with a slightly thicker char on the outside.

However, the meat has to be cooked to an internal temperature of 145°F to be safe.

Any list of delicious recipes would be remiss if it did not include steak.

This classic dish has been a favorite of home cooks and professional chefs alike for centuries.

There are many different ways to prepare steak, but one of the most popular methods is to pan-fry it.

This technique involves using a small amount of oil for cooking the steak in a hot pan.

The key to success is ensuring the pan is hot enough to sear the steak outside while keeping the inside juicy and tender.

Another popular method for cooking steak is to grill it.

This approach gives the steak a smoky flavor and a crispy exterior.

When grilling, it is important to use indirect heat so that the steak does not become charred on the outside while remaining raw on the inside.

Whether you pan-fry or grill your steak, there are many delicious recipes that you can try.

Go to top
Table Of Contents show
1 How Rare Can A Steak Be And Still Be Safe?
2 Is Blue Rare Steak Safe?
3 Can You Get Sick From Eating Rare Steak?

How Rare Can A Steak Be And Still Be Safe? 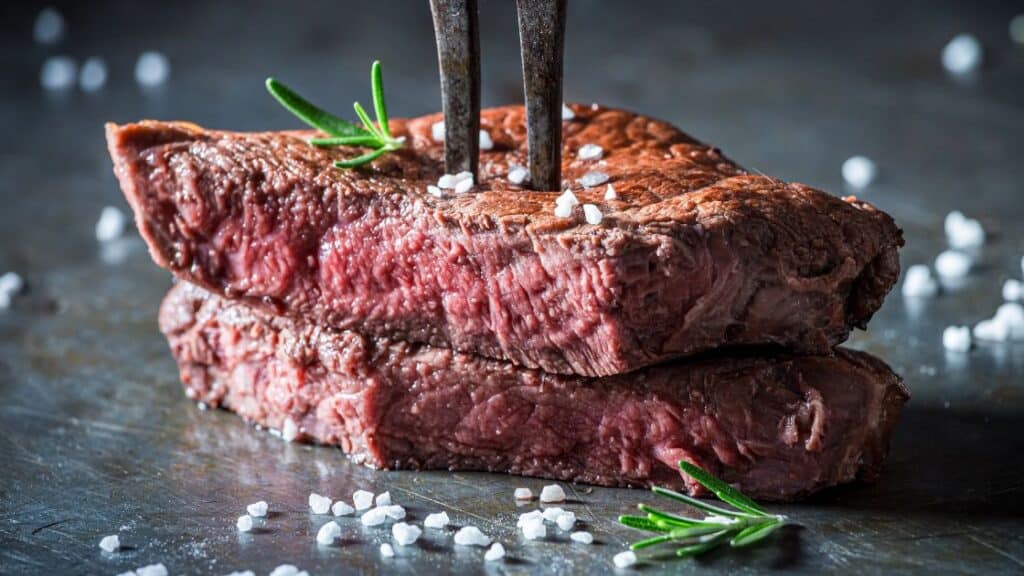 Generally speaking, rare steak or medium-rare is going to be safe, as long as the steak’s internal temperature is raised to 145°F to kill any bacteria.

That being said, there is always a risk of bacteria being present on the surface of the meat, so it’s important to ensure that any steak you eat is properly cooked on the outside.

Of course, even if a steak is properly cooked on the outside, there is still a risk of foodborne illness if the meat is not handled properly.

Anyone who has cooked a steak or roasted a chicken knows that raw meat can be full of bacteria that can make you sick.

In fact, according to the Centers for Disease Control and Prevention (CDC), approximately 48 million people in the United States get sick from foodborne illnesses each year, and 3,000 of those people die.

While most cases of food poisoning are not life-threatening, they can still cause serious illness, so it is important to take precautions when handling raw meat.

The CDC recommends washing your hands thoroughly with soap and water after handling raw meat and keeping raw meat separate from other food items to avoid cross-contamination.

Additionally, it is important to cook meat properly to kill any harmful bacteria. 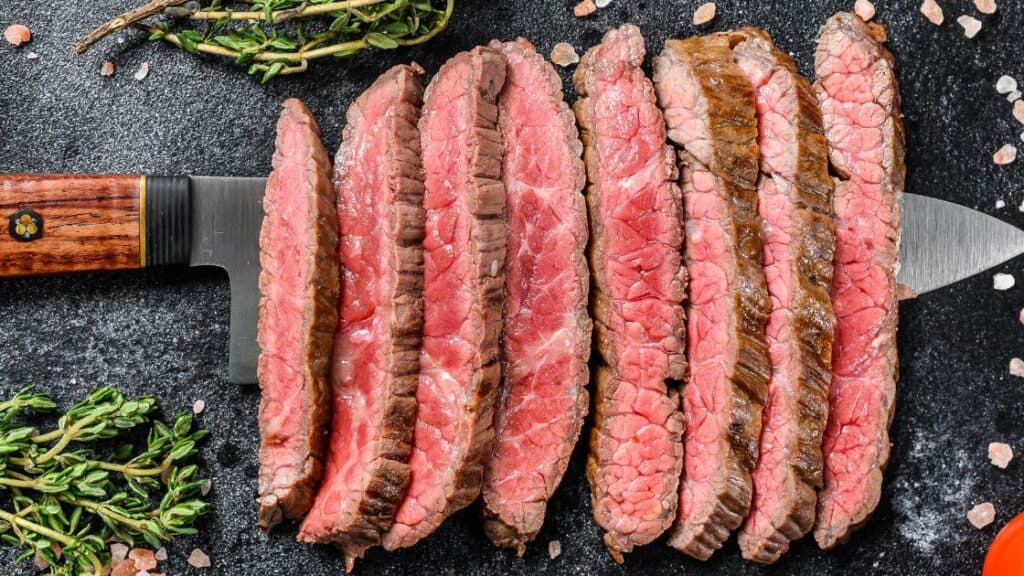 There is a chance that bacteria could survive on the surface of the meat if it isn’t cooked long enough or at a high enough temperature.

This is why food scientists recommend cooking steak to an internal temperature of 145 degrees Fahrenheit (63 degrees Celsius) to kill any potential bacteria.

Blue rare steak falls well below this temperature, which means there is a risk that harmful bacteria could survive on the meat.

However, some types of bacteria can cause food poisoning, leading to symptoms like vomiting, diarrhea, and fever.

If you’re concerned about the safety of blue rare steak, you may want to cook it at a higher temperature to kill any potentially harmful bacteria.

Or you may choose to avoid it altogether and stick with more well-done cuts of meat.

Blue rare steak is a type of meat that has been cooked for a very short amount of time.

The name “blue rare” comes from the fact that the steak is still mostly raw in the center, giving it a blueish color.

This type of steak is usually only cooked for one to two minutes per side, resulting in a final product that is juicy and tender.

While blue rare steak is not as popular as other types of steak, but it can be a delicious and healthy option if you want something different.

Just be sure to keep an eye on your steak while it is cooking, as it can quickly become overcooked.

Can You Get Sick From Eating Rare Steak? 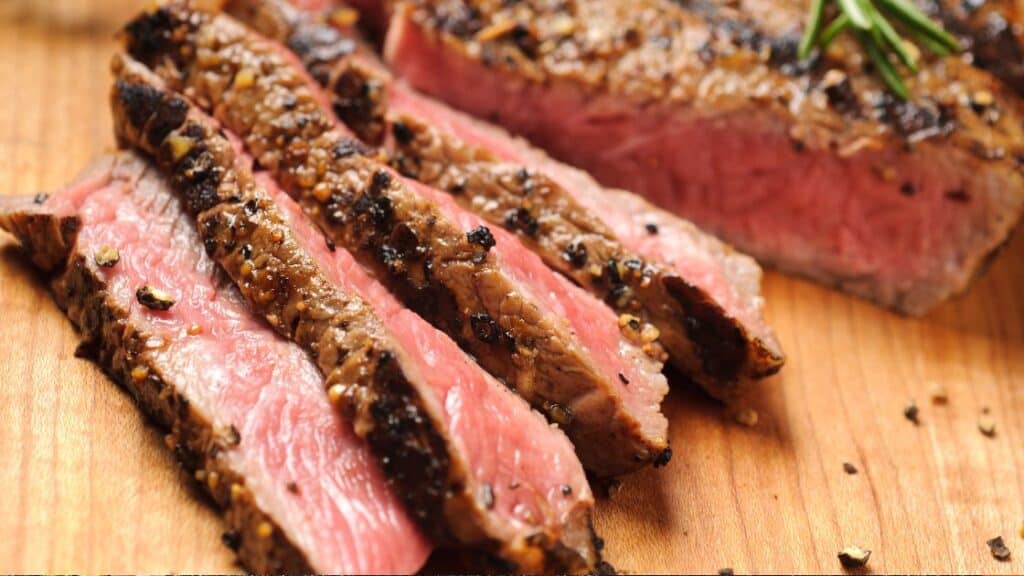 Both of these illnesses are caused by bacteria that can be present on the surface of the meat.

When meat is cooked, the heat kills the bacteria, but if the meat is not cooked thoroughly, the bacteria can survive and cause illness.

Although both of these illnesses can be unpleasant, they are usually not life-threatening.

According to the Centers for Disease Control and Prevention (CDC), foodborne illnesses are a leading cause of illness in the United States.

Each year, approximately 48 million people get sick from contaminated food.

The most common symptoms of food poisoning include nausea, vomiting, diarrhea, and abdominal cramps.

In severe cases, food poisoning can lead to dehydration, headaches, fever, and even death.

While any type of food can become tainted with bacteria or other contaminants, certain types of food are more likely to cause illness.

To help reduce your risk of food poisoning, be sure to wash your hands thoroughly before handling food, cook meat and poultry to the proper temperature, and avoid cross-contamination by keeping raw and cooked foods separate.

So, if you enjoy eating rare steak, there is a small risk of becoming ill from bacteria that may be present on the surface of the meat.

However, you can minimize this risk by ensuring that your steak is sourced from a reputable supplier and cooking it properly (to an internal temperature of at least 145 degrees Fahrenheit).

You can enjoy your steak without fear of getting sick with a little care.