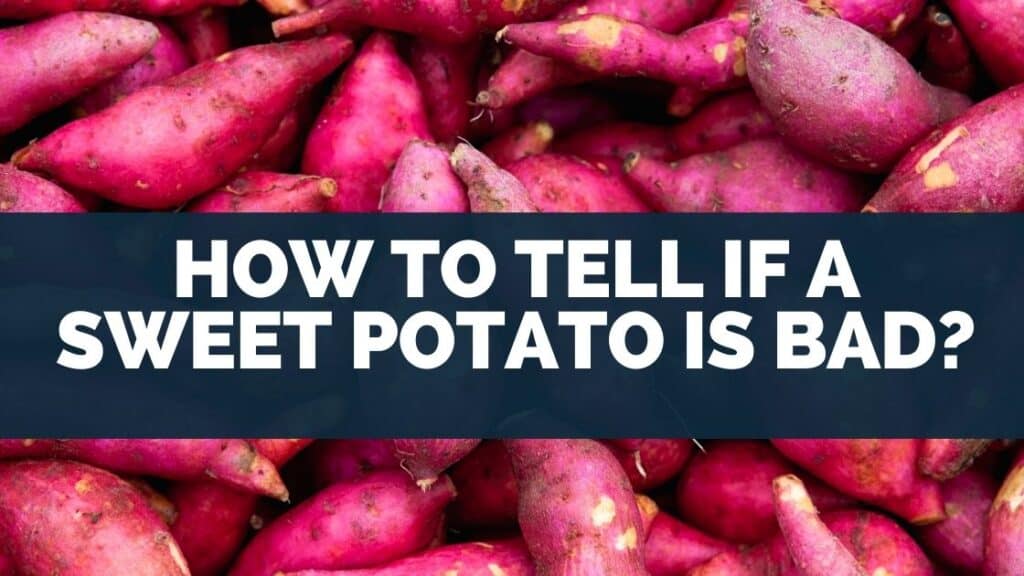 The sweet potato (Ipomoea batatas) is the thick, bulky root of the Morning Glory (Convolvulus) family of plants.

The starchy root is used to store energy for times when the above-ground part of the plant cannot grow, allowing the plant to survive until the next growing season comes.

If you are unsure if your sweet potato has gone bad, you can smell it, squeeze it, look for color changes, mold and, black rot.  These are all signs of a bad sweet potato.

Just like all food, if the sweet potato smells terrible, then it is rotten.

You should compost it or throw it away.

The sweet potato should be firm when you squeeze it.

It will be ok if it is a bit soft but chuck it as soon as it is mushy.

Usually, the ends go bad first, so give them a squeeze, and you’ll figure it out.

Check if the color has changed
If the sweet potato is discolored, you should not eat it.

Most of the sweet potatoes sold in America are one of four color combinations.

– rose skin and orange inside

– light copper or tan with inside white

– purple inside and outside

– red with the inside white

The mold can be cut away if the sweet potato is firm.

The mold has problems penetrating the dense flesh, just remember to cut deep enough to make sure your blade does not touch any of the mold.

You should not eat the sweet potato if it is infected with black rot.

Caused by a fungus, Ceratocystis Fimbriata or black rot is known for causing death and sickness in cattle.

The black rot may have spread into the flesh of the sweet potato.

It is usually transmitted from the parent but can also spread through infected soil, equipment, or insects.

Look for a dry, firm, dark-colored rot, and if present, dispose of it immediately.

Food waste is never nice but if in doubt, discard the sweet potato.

Consuming any mold or black rot can lead to disastrous health consequences and should not be risked.

What Happens If You Eat Bad Sweet Potato? 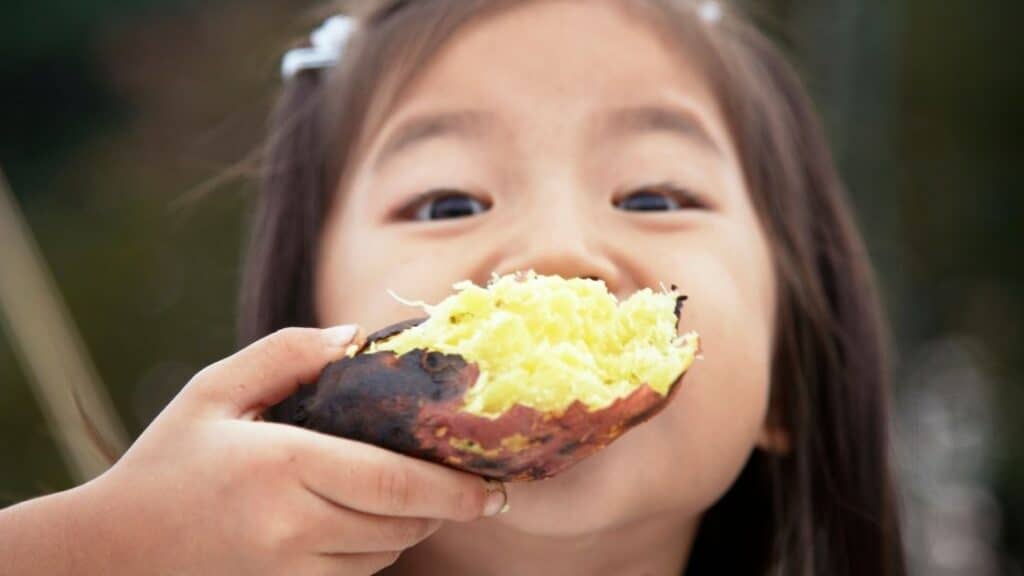 When in doubt, discard any sweet potato you suspect has gone bad.

You’re probably going to get pretty sick, and how sick depends on why the sweet potato is bad.

Black rot is caused by a fungus called Ceratocystis Fimbriata that has been linked to lung edema and the death of cattle.

Black rot is transmitted from the parent plant but can also spread through infected equipment, insects, and soil.

It may be harmful to humans, and the fungus may spread into the seemingly unaffected flesh.

Do not eat sweet potatoes that have black rot on them, and throw them away as soon as you can. (Source)

Mold is a tiny fungus that can live on sweet potatoes.

If you eat sweet potatoes with mold, you may get an allergic reaction or respiratory problems.

Don’t attempt to smell anything moldy since the particles may go into your lungs.

Mold may also produce mycotoxins, a group of poisonous substances.

The most common mycotoxin is aflatoxin, which can cause cancer and damage the liver.

It is difficult for the mold roots to grow into a dense sweet potato, so you can cut away mold from a sweet potato as long as it is sturdy and has not started to soften.

It is crucial to cut deep enough, so the knife never touches any part of the mold. (Source) 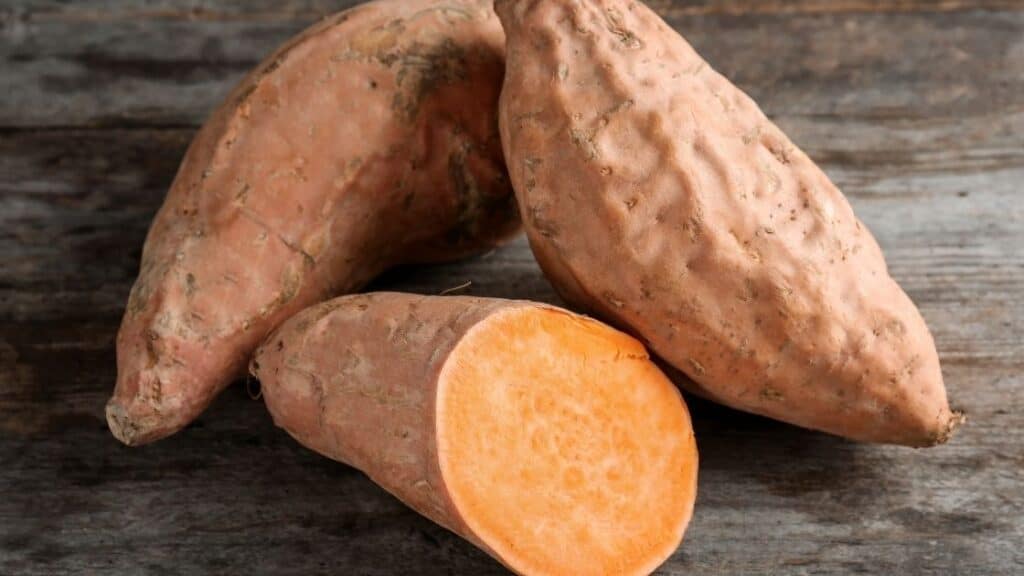 In contrast, regular potatoes contain glycoalkaloids that make them toxic when sprouted.

Sweet potatoes do not have such compounds.

It is sometimes believed that the sweet potato is simply a sweet version of the potato.

While they do have many common traits like a high content of antioxidants, vitamin C, carbohydrates, and fiber, they are not from the same family.

The sweet potato is in the morning glory family with the flowers that open each morning.

The morning glory family, or Convolvulaceae, contains some 1,000 species of flowering plants.

The potato is in the nightshade family, in addition to other fellow nightshades like tomato and tobacco.

Potatoes that have sprouted or turned green should not be eaten.

They may contain harmful toxins called chaconine and solanine. (Source)

An old sweet potato might still be okay to eat unless it has black spots or mold.

Mold can cause allergic reactions and respiratory distress in some people.

Prolonged exposure to mycotoxins can lead to severe diseases and even death.

A common mycotoxin is an aflatoxin, a compound known to cause cancer.

Immediate response to high levels of mycotoxins may include diarrhea, vomiting, and liver disease.

Long time exposure to even small amounts may weaken the immune system and have been linked to cancer.

The roots of mold have difficulty penetrating the dense flesh of the fresh sweet potato, so it is possible to remove it.

Cut deep into the flesh to remove any mold, avoiding any contact with the mold and knife.

Molds spores are airborne and can spread rapidly.

Remove all mold immediately from the vicinity to prevent spread.

Ceratocystis Fimbriata, a fungus known as black rot, is a plant pathogen and an organism that is the cause of an infectious disease.

Black rot is known to cause cattle deaths and sickness in multiple cases and should not be eaten.

Are Sweet Potatoes Bad If They Have Sprouts? 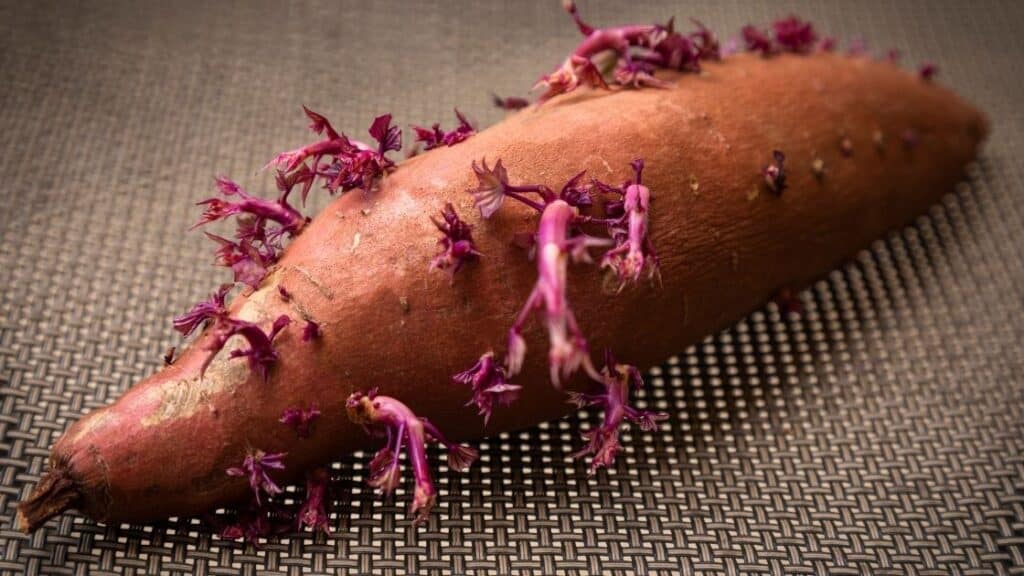 Sweet potatoes do not go bad when they sprout, unlike potatoes.

The sweet potato is a different family than the potato and does not contain the toxic glycoalkaloids that the potato has when sprouted.

The sweet potato is part of the morning glory family (Convolvulus), while the potato is nightshade (Solanum).

Sprouted sweet potatoes may have less nutritional value but can still be eaten.

The leaves of the sprout have a high level of vitamin A and C.

The common belief that sweet potatoes go bad when they sprout is probably because potatoes do.

The sweet potato does not have the glycoalkaloids that are present in all potato plants.

Glycoalkaloids are found just under the skin of a potato at low levels.

The highest levels of glycoalkaloids are in sprouts and flowers.

Sprouting causes an increase in the level of glycoalkaloids.

In addition, potatoes photosynthesize and turn green when exposed to direct sunlight.

While photosynthesis is unrelated to the production of glycoalkaloids in the potato, it is an indicator since they are happening simultaneously.

The glycoalkaloids are believed to protect against pathogens and predators like fungi, insects, and bacteria in the potato.

High levels of glycoalkaloids make them bitter and unsafe for consumption.

Can You Eat Brown Sweet Potatoes? 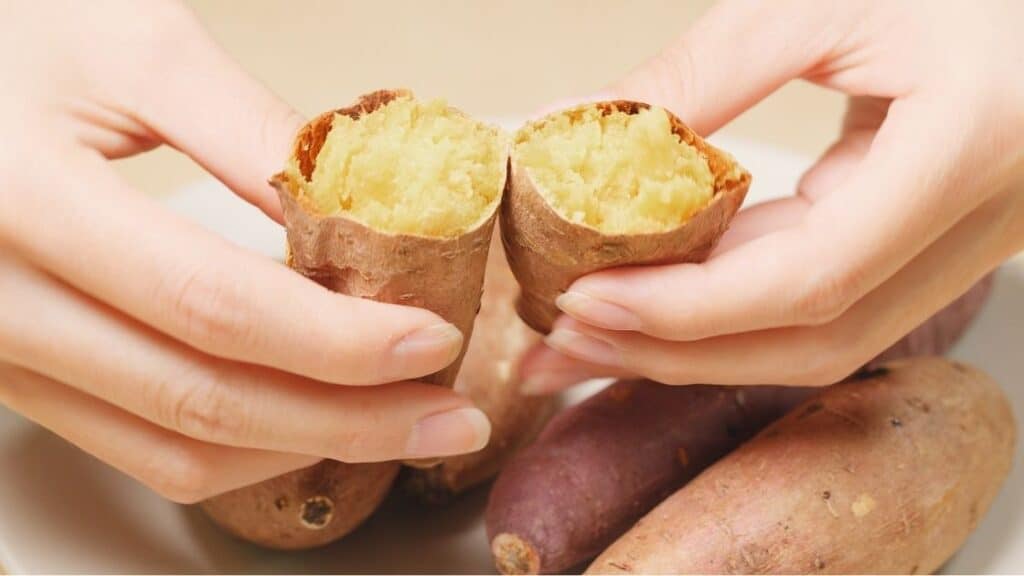 A sweet potato, just like an apple, will turn brownish or gray when the flesh is exposed.

This is normal and means the starch is oxidizing.

A sweet potato that has turned brown when exposed to air is perfectly safe to eat.

However, if wary, you can peel or cut away the brown bits before consumption.

If you peel a sweet potato and have it exposed to air for too long, it might start turning brown.

You can avoid this by submerging it in water.

Use a glass container since the metal may speed up the process of oxidation.

For extended storage, place the glass container with the sweet potato in the fridge.

If you plan to store it for more than 6 hours, you can add a little lemon or vinegar to slow the oxidation even more.

Check thoroughly for mold or black rot, two conditions that will render the sweet potato inedible.

Squeeze the ends and ensure the potato is not spongy or mushy.

Potatoes start to rot from their ends.

If it is black and mushy, dispose of it immediately.

Black rot can spread to other food and has caused disease and death in cattle.

Mold spores have been known to cause allergic reactions and respiratory problems.

In addition, mold can produce mycotoxins, a poisonous compound that can cause sickness or death.

One of the common mycotoxins is aflatoxin, a compound linked to causing cancer.

Symptoms of mycotoxin poisoning can include diarrhea, vomiting, and liver complications.

Long-term exposure has been linked to a weakened immune system and cancer.

You can still save a moldy potato.

Cut away the moldy parts deep into the flesh, leaving a generous allowance and avoiding contact with the mold.

If the potato is soft or mushy, it should be tossed because the roots of the mold may have penetrated the skin.