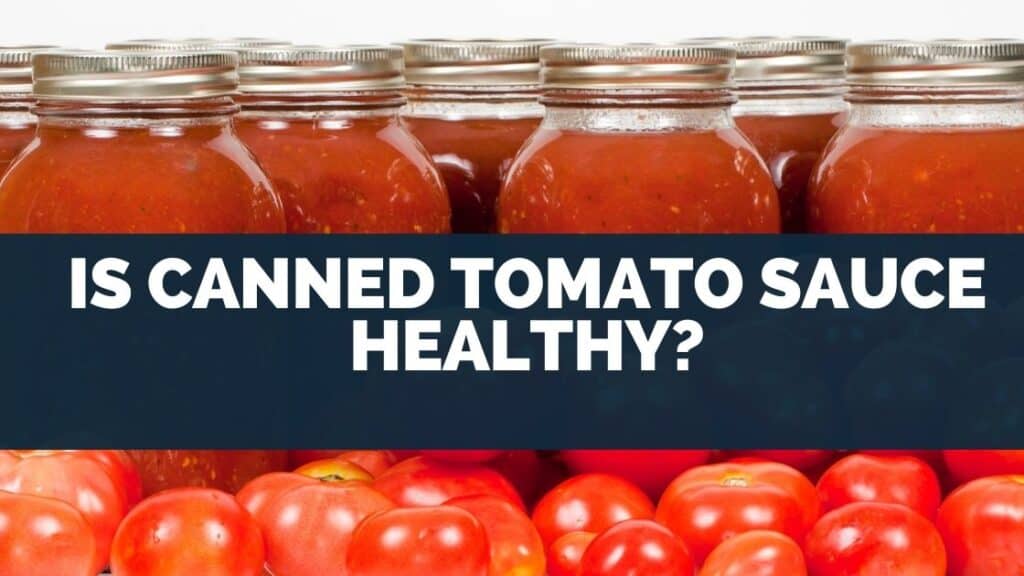 Tomato sauce can be made at home, bought in squeeze bottles, or purchased canned.

Canned tomato sauce is more convenient than making your own, and is typically cheaper than buying it in a squeeze bottle, which makes it a better option most of the time.

Today, I will explain whether canned tomato sauce is healthy.

There are no known negative effects of eating canned tomato sauce.

It also contains reasonable amounts of beneficial vitamins and minerals such as vitamin C and calcium.

Are Canned Tomatoes as Healthy as Fresh? 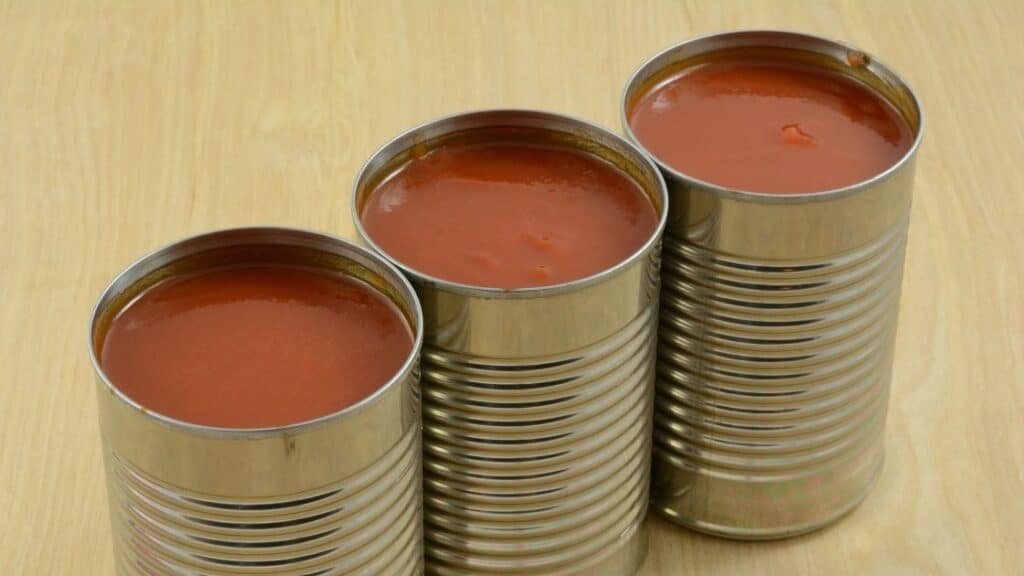 Therefore, you may think that canned tomatoes aren’t as healthy as fresh tomatoes, or maybe curious whether they are or not.

Certain nutrients such as vitamin C, and vitamin A are higher in raw tomatoes compared to canned tomatoes.

But, doing a total of all the nutrients reveals that canned tomatoes have 1.25% more nutrients total.

Here’s a very helpful table that shows this information.

At the bottom of the table is the total of all the nutrients.

And the ‘canned difference’ column shows how much more of each nutrient canned tomatoes have over raw tomatoes.

*Percentages are recommended daily intake (RDI), and are based on 1 oz (28g) of canned and raw tomatoes.

The vitamins and minerals that are significantly higher in canned tomatoes compared to raw tomatoes are:

Whereas, the vitamins and minerals that are significantly higher in raw tomatoes compared to canned tomatoes are:

Overall, they are quite similar in the amount of nutrients total.

But, as you can see they do vary quite a bit based on the specific nutrient in question.

As you may know, tomato sauce generally is made with additional ingredients.

This typically includes onions, garlic, and sometimes carrots and celery.

Therefore, I thought it would be interesting to analyze which is healthier, canned tomatoes or tomato sauce.

However, this number is a bit misleading because tomato sauce has 3% more of the recommended daily intake of sodium, which is just added salt. It’s fairly easy to add additional salt to your diet.

Whereas, supplementing your diet with other nutrients such as Vitamin A, or Vitamin E can be a bit more expensive.

Therefore, on balance both are about on par in regards to which is better to consume based on the number of nutrients they contain.

But, it remains true that canned tomato sauce has 2% more nutrients if you remove salt from the numbers.

These are the typical large tomatoes that you find in stores.

But, there are also cherry tomatoes, and plum tomatoes that are smaller and shaped differently.

There are a few different kinds of plum tomatoes.

Roma tomatoes and San Marzano are quite well known for being the most delicious plum tomatoes and are typically used in Italian cuisine.

I did a comparison of the differences between Roma tomatoes and San Marzano tomatoes in this article about plum tomatoes versus roma tomatoes. 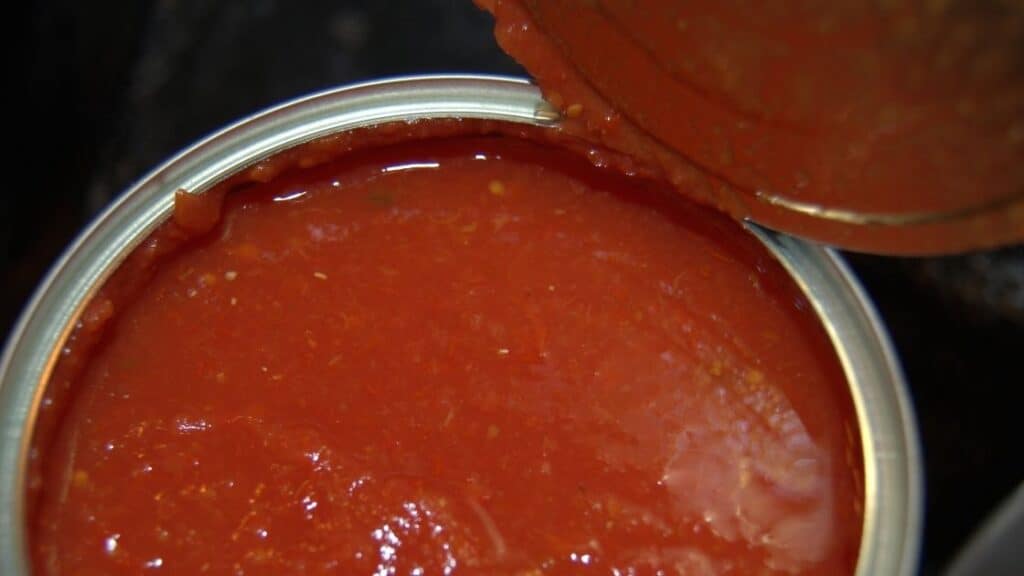 But, you might also chop raw or cooked tomatoes to use in recipes.

Therefore, I thought I’d answer whether whole canned tomatoes are better than diced or chopped tomatoes.

Canned tomatoes are typically blended when used in tomato soup, or a tomato sauce such as for pasta, so either diced or whole are fine.

But, if you’re going to chop them anyway, then diced are more convenient.

This is used as a base for pasta sauces. As well as, on pizza.

In all of these recipes, the tomatoes are blended in a blender to turn them into a liquid.

Tomatoes are very soft, so whether they’re diced or whole doesn’t make much of a noticeable difference for these recipes.

Canned tomatoes are cooked prior to being canned to remove any bacteria.

Therefore, if you’re using canned tomatoes in a recipe that needs chopped tomatoes.

Canned tomatoes that are diced are more convenient.

Because you won’t need to chop them after removing them from the can.

In terms of nutritional value, canned diced or whole tomatoes are identical.

Therefore, the main consideration is how you’re going to use them.

Canned foods last a lot longer than fresh foods such as fresh tomatoes.

And you may be wondering how long canned tomatoes last, on average.

I explained the answer to this question in this article about how long canned tomatoes last.

Why Are Whole Canned Tomatoes Better? 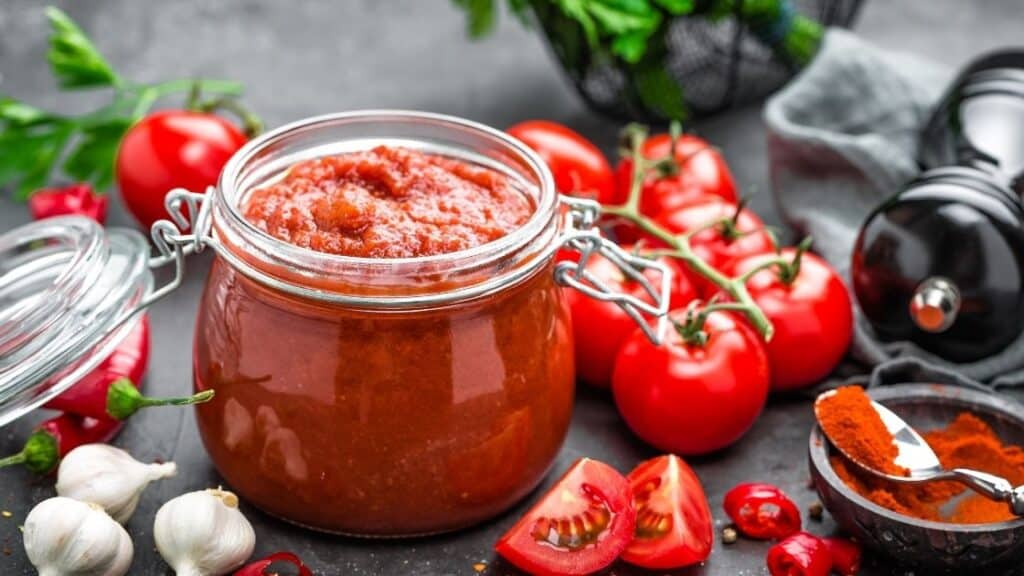 Many people wonder whether fresh tomatoes should be used rather than canned tomatoes.

And if there is any reason to use whole canned tomatoes over diced tomatoes or fresh tomatoes.

Here are the reasons why whole canned tomatoes can be a better option.

If you’re using them in a recipe where you will blend them such as tomato sauce for pizza, or pasta, or using them to make juice or soup, it doesn’t make a difference if they are diced or whole.

Canned tomatoes are cooked before canning which makes them very soft.

This makes them very easy to blend in a blender.

And whether they are chopped or not makes little to no difference.

But, if you’re making a recipe where you want tomato chunks rather than blending them, then diced are better because you won’t need to chop them.

Or, you won’t need to chop them as much.