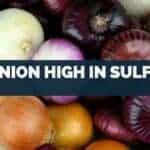 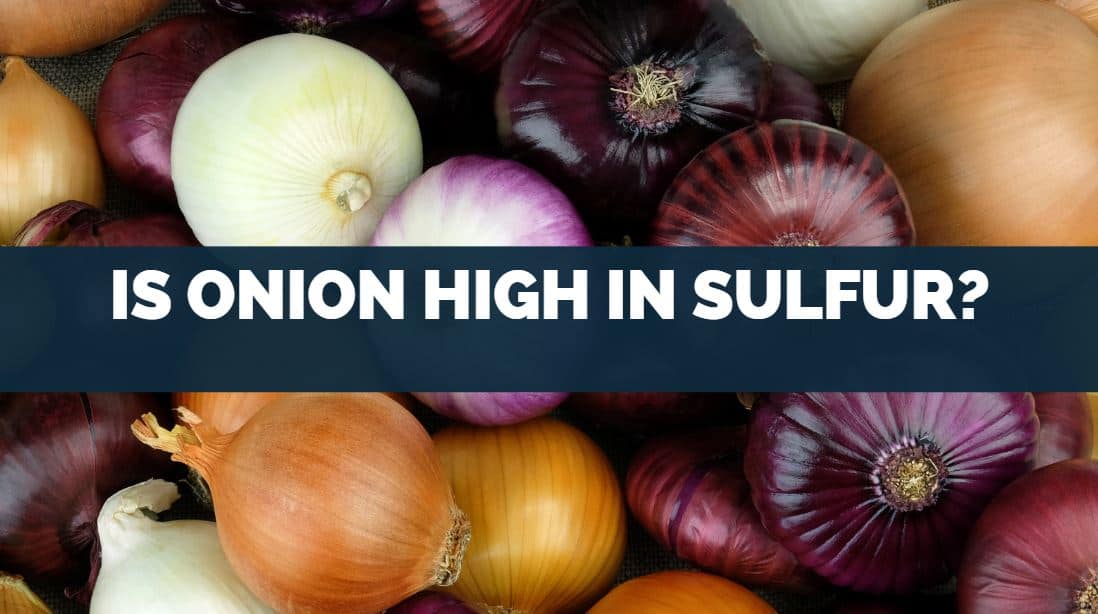 Sulfur isn’t generally not listed as a nutrient on the nutritional label of foods.

Sulfur also is good and bad depending on where it’s found.

Onions have a very strong taste raw, and make you cry if you inhale the gas through your nose when chopping them, which is known to be caused by the sulfur content in onions but are onions high in sulfur?

Onions are not particularly high in sulphur compared to other vegetables.

They also have significantly less sulfur than meat.

Onion and other vegetables contain on average 20 moles of sulfur per gram.

Whereas, meat contains 100 mol/g of sulfur.

Today, I will provide a table showing how the sulfur in onions compares to other commonly consumed foods such as meat, other vegetables, as well as, the other vegetables in the onion family such as garlic and leek.

Go to top
Table Of Contents show
1 Is the Sulfur in Onions Bad for You?
1.1 Where the sulfur in onions comes from?
2 What Type of Sulfur Is in Onions?
3 Can You Extract Sulfur from Onions?

Is the Sulfur in Onions Bad for You? 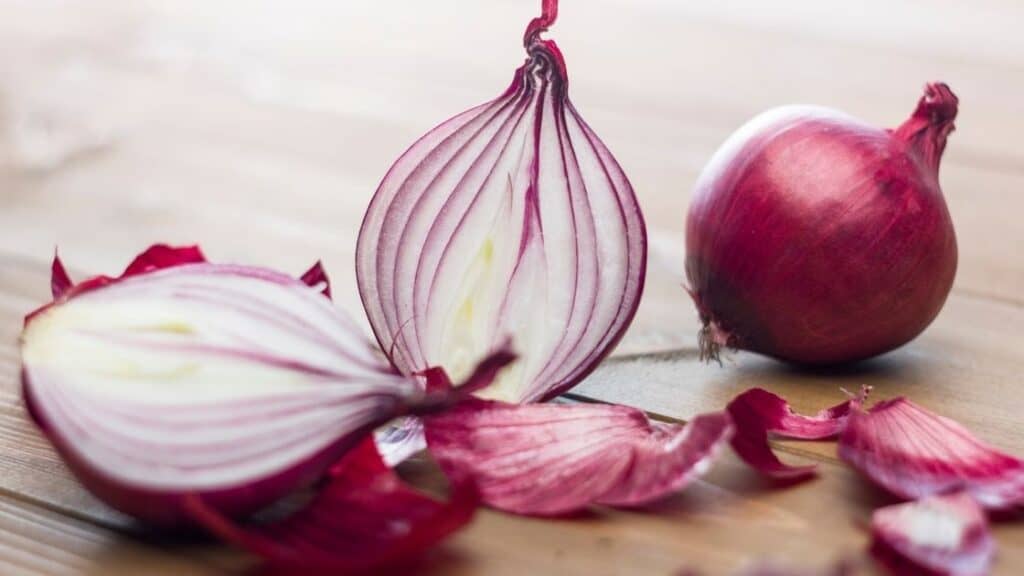 Sulfur comes out of volcanoes and areas nearby are generally evacuated when a large amount of gas is known to have been released or is expected because it’s very toxic in concentrated amounts.

But, it is also found as a solid when it binds with other elements, so is the sulfur in onions bad for you?

The levels of sulfur found in onions is not bad for you.

Onions contain a similar amount of sulfur to other vegetables, and significantly less than meat and eggs.

Therefore, the sulfur in onions is not bad for you.

I’ll explain below where the sulfur in onions comes from and more about why it isn’t harmful.

But, first here’s a table that shows how the sulfur in onion compares to the levels of sulfur found in other foods:

From the table, you can see that there is a wide range of sulfur found in different foods.

Some foods have significantly more sulfur than onions, whereas, others have a similar amount or slightly less.

Foods with the most sulfur include:

Leeks and garlic are very similar to onions.

You may be wondering what the relationship is between them.

And if they are in the same botanical family or the same species of plant.

I explained how all of the different kinds of vegetables that are very similar to onion taste which includes garlic, onions, spring onion, shallots, scallions (also called green onions), leeks, and chives in this article about whether leeks are onions.

Brown onions are generally the most common.

These are the types of onions with light brown skin and white flesh.

So, I’ve compared the amount of sulfur for brown onions for the comparison above.

But, red onions, interestingly, nearly double the sulfur that brown onions have.

The measurement µmoles/g is a way of determining the percentage of sulfur per gram of a particular food.

It’s used in science measurement as a measure of the individual atoms in simple terms.

Atoms are very very small parts of something.

Because they are so small, a mole is a very large amount of atoms, which makes it easy to make calculations that a chemist or scientist would usually do. 1 mole = 6.02 times 10²³, this is a very very large number.

Much like milli is 0.01 of something. Which has the abbreviation ‘m’.

A quote from the study that extracted the sulfur explains that the sulfur found in foods such as onions has been an interesting field of study:

“Due to the potential importance of sulfate-reducing bacteria (SRB) in the colon, and their association with ulcerative colitis, irritable bowel disease, and Crohn’s disease.”

The contribution of alliaceous and cruciferous vegetables to dietary sulfur intake. Food Chem. 2017;234:38-45

Where the sulfur in onions comes from?

As you may remember if you’ve taken chemistry, elements on the periodic table can occur as a gas, a solid, or as a liquid.

Some of the sulfur in onions is released as a gas and makes your eyes sting and water.

But, it’s also found as a solid where it’s bound to other elements in the flesh of the onion.

Chemical processes involving rocks are studied in a scientific field known as Geology.

Geology theory states that all rocks come from lava underneath the hard exterior of the earth which is rocks.

Over time rocks will be broken down by the water, and chemical processes to produce soil.

Interestingly, if you go down deep enough into any soil you will find a bedrock of solid rock.

As new rocks are formed by cooling and hardening of the liquid rock beneath sulfur in the lava hardens into a solid.

But, some of it is released as gas.

This rock that contains sulfur is broken down into the soil over time.

And as a plant grows such as onion it takes up some of the sulfur in the roots.

As well as, other chemical elements such as nitrogen.

This is how onions and other fruits and vegetables contain sulfur.

What Type of Sulfur Is in Onions? 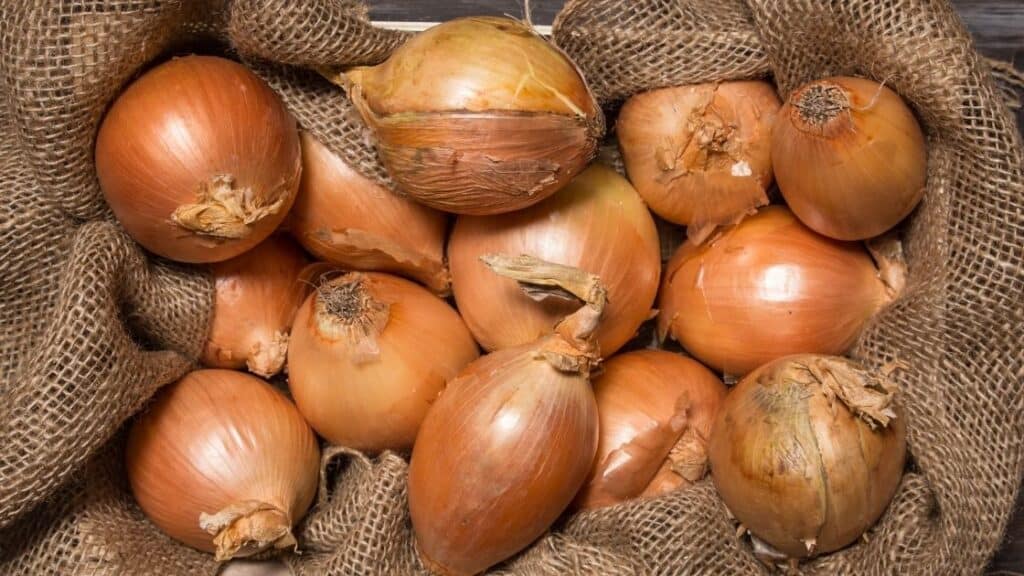 There are a few different chemical combinations of sulfur that naturally occur in nature.

There is sulfur itself which has the symbol S on the periodic table, but there is also sulfate, which is the combination of sulfur and oxygen which has the chemical formula SO2.

Here’s what type of sulfur is found in onions.

There is a stark difference between the number of sulfur amino acids and the amount of sulfur and sulfate found in different kinds of foods.

Here’s a table that shows the amounts of these different kinds of sulfur in common food:

From the data, a conclusion can be drawn that vegetables have far more sulfur and sulfate than sulfur amino acids.

There are also white onions, which are less common but unfortunately weren’t analyzed in the study.

I previously looked at the nutritional differences between red and white onions which gives more detail about which is healthier in this article about red onions vs white onions.

Can You Extract Sulfur from Onions? 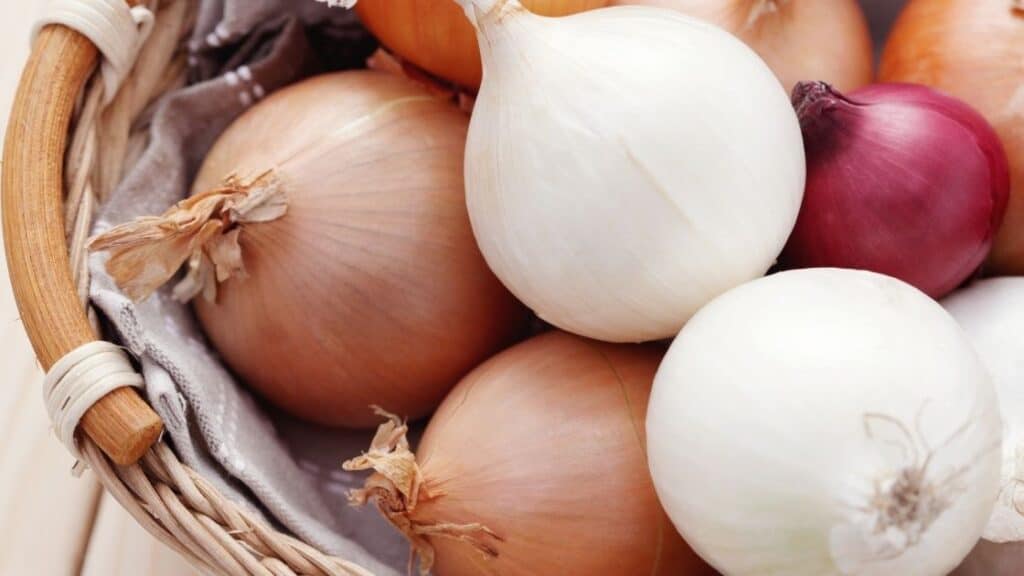 Sulfur is not harmful to consume in the amounts found in virtually all foods.

But, you may be wondering if it’s possible to extract sulfur from foods and whether you can remove it from onions.

There is no way to remove sulfur from foods by cooking or washing them according to the Canadian Society of Intestinal Research.

However, they can be extracted for analysis using complex chemical processes that involve harsh and toxic chemicals such as hydrogen peroxide.

To better understand the distribution of the different chemical elements, chemists and scientists have experimented and come up with ways to separate out sulfur found in nature such as in plants, meat, soil, and rocks.

These processes, however, destroy the source material, and therefore, it’s not practical to do it for the onions that you intend to eat.