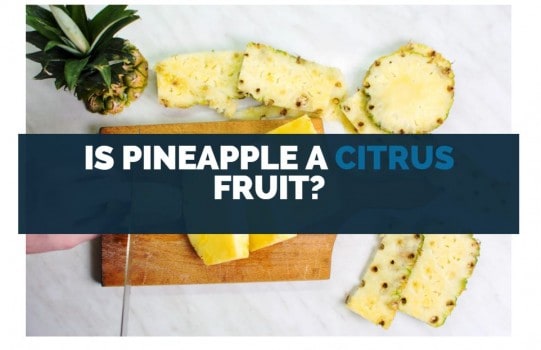 Did you know that Pineapples are from the Bromeliaceae family?

The Pineapple is the only fruit that grows from this family, the other major major product of this family is Spanish moss.

But enough about that , you’ve no doubt landed here as you where wondering whether pineapples were classed as citrus fruits?

These citrus fruits are tropical but they do not grow on trees. Instead, they come from a family that grows in soil.

Pineapples do have a lot in common with citric fruits though, including being a great source of vitamin C ,and growing in tropical climates as many citrus fruits do.

Pineapples do contain small amount of citric acid , around 8%, which often leads people to think they are citrus fruits, but they’re definitely not a citrus fruit.

This plant family is also known for colorful flowers and foliage.

It’s native to tropical areas but has spread to other places.

Even though pineapple is not a citrus fruit, there is citric acid in pineapple.

This helps give pineapple the tart taste that pineapple is known for.

There are also different kinds of acid in pineapple that contribute to the taste, these acid balances can change depending on the temperature the pineapple grows in.

Pineapple has several health benefits that can make it a great choice to eat as a part of a balanced diet.

It also contains melatonin, which can help you fall asleep quicker.

This makes pineapples one of the foods that can be useful to eat before going to bed.

Pineapple, besides being a delicious and nutritious fruit, is fascinating to learn more about.

It’s a one-of-a-kind fruit that provides as many facts to study as it does nutritional value. Learning about pineapple will enlighten your life, even if you don’t like the taste.

Pineapple may have a lot in common with citric fruits, but they are a unique fruit that grows within the Bromeliaceae family.

This tart fruit has numerous health benefits and has many unique qualities that make this a great addition to a balanced diet for many people.

Go to top
Table Of Contents show
1 What Kind of Fruit is a Pineapple?
2 Does Pineapple Have Citric Acid?
3 Can We Eat Pineapple at Night?
4 Pineapple Facts

What Kind of Fruit is a Pineapple? 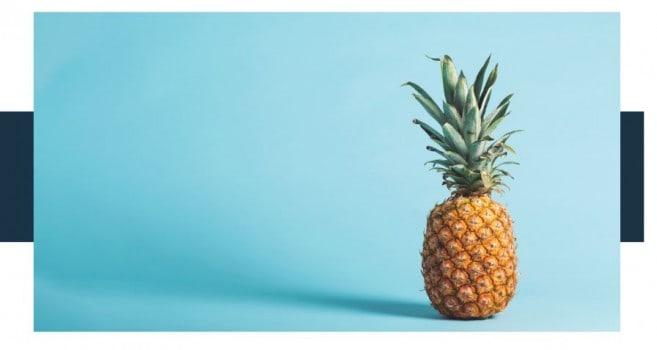 Pineapple is a member of the Bromeliaceae family.

This plant family is well-known for its colorful plants and flower spikes.

Unlike citrus fruits, which grow from trees, pineapples grow from the soil. The plants that pineapple grows from bear resemblance to shrubs.

Along with Spanish moss, pineapple is the most prominent plant in this family.

Plants in this family can also be used for rope and fabric.

Nearly all of the plants in the Bromeliaceae are native to the tropical New World and the West Indies. It has been brought to other locations.

Pineapples are a unique kind of fruit because it is a group of berries.

The flowers that develop into berries grow on a stalk and fuse together.

Unlike other fruits which typically bloom from one flower or a similar source.

It’s also unique from other fruits in that you do not grow new pineapples from seeds, but from slicing the top of the pineapple off and planting that in soil.

While pineapple is native to tropical climates, it is now grown all over the world.

Shortly after being discovered, it was brought to new places throughout the known world.

Common places where pineapple is grown are China, India, and Thailand as well as throughout South America.

Does Pineapple Have Citric Acid? 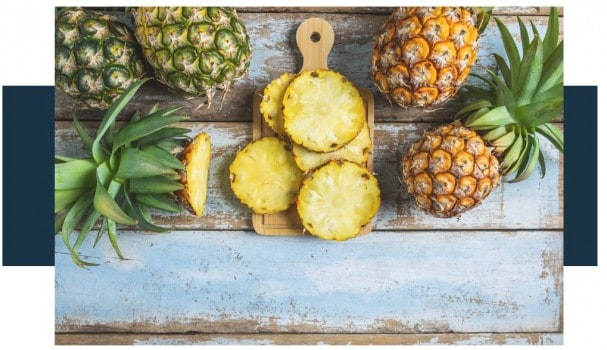 This contributes to the tart taste that pineapple is known for.

Citric acid is very common and is typically found in many fruits and nearly every living organism.

The citric acid in pineapple helps make pineapple unique in other ways as well.

The citric acid found in pineapple can be used as a food preservative as well as increasing the tartness in food.

The citric nature of pineapple also makes it pair well with other foods.

The citric notes, as well as floral notes, work to make the fruit go well with many other foods, it can go with alcohol, meats, and desserts.

Not many other foods are as versatile. This is one of the many reasons for the enduring popularity of pineapples.

Pineapple can be enjoyed with many different types of meat because of its use as a meat tenderizer.

Bromelain found in pineapple is the reason for this.

Bromelain can be used alone or with pineapple to tenderize meat, especially beef which can be especially tough.

Bromelain is most concentrated in the stem of pineapples, though other parts of pineapples can be abundant with this substance.

Can We Eat Pineapple at Night? 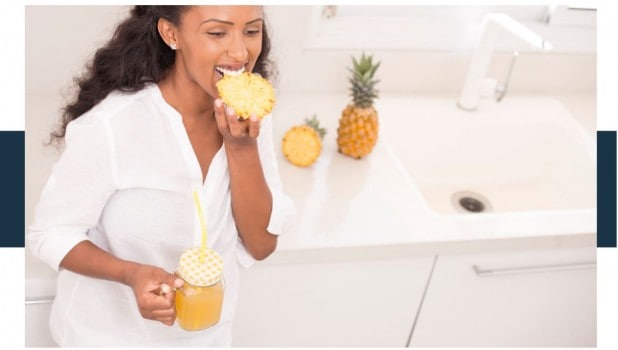 While eating at night is typically not advised for many reasons, eating pineapple can be viewed as an exception.

Pineapple is found to contain melatonin which helps regulate your sleeping cycle.

Eating pineapple at night can help you go to sleep faster.

Besides helping you fall asleep quicker, there are many other health benefits to eating pineapple.

Pineapple is full of vitamins and antioxidants that are necessary to stay healthy.

Among these vitamins and antioxidants are vitamins C and A, zinc, and calcium.

These combinations of vitamins and nutrients can help give your immune system a boost.

This won’t prevent you from getting sick at all, but it can make it easier for your body to fight various diseases.

Some studies have indicated that the bromelain in pineapple can help boost immune health.

Even with all of these health benefits to eating pineapple, there are some health risks as well. As with any food, eating too much pineapple can contribute to health problems.

These problems can range from getting a tender mouth to vomiting in some cases. Some of the minerals in pineapple can also react negatively with some medications.

When purchasing pineapple you will want to ensure that you’re purchasing a pineapple that is ripe to avoid throat irritation and laxative issues.

For people who have acid reflux, eating pineapple at night can make those symptoms worse.

Acid build up in the stomach is already high at night and adding more acid right before going to bed can exacerbate that.

If you are sensitive to acid reflux, eating pineapple at night may make the problem worse.

Pineapple is high in acidity, meaning that it can contribute to feelings of acid reflux.

This is typically not a problem unless there are other health problems. Always consult a doctor if you experience problems during or after eating any kind of food.

Besides being a delicious and unique fruit, pineapple is an interesting fruit with a lot of history behind it.

Ever since its discovery by Europeans as they explored the New World, it has been a point of interest.

Shortly after its discovery, it was transported around the world to be enjoyed by people all over to this day.

While the Spanish, pineapples are called pina, pineapple comes from its resemblance to pine cones.

Pineapples being the first name for pine cones as recorded in 1398.

Despite this name, pineapples are not related to pine trees or apples, it’s actually a berry as stated above.

Christopher Columbus is often attributed to bringing pineapples to Europe and soon after pineapple became popular among European nobles.

It was first grown in hothouses in Europe, showing how desirable it became before other growing techniques were developed.

In the wild, pineapples are pollinated by hummingbirds and can last for fifty years.

Pineapples are not only popular among humans, bats eat certain species of pineapples that open their blossoms at night rather than during the day.

Though pineapples are believed to be indigenous to Brazil and can grow naturally in South America, today Southeast Asia is responsible for growing most of the pineapples eaten around the world today.

Thailand is the biggest producer of pineapples today even though the fruit is not native to the country or area.

Pineapple has remained a popular fruit for many reasons since its discovery by the early Europeans.

Though its tart flavor may make it seem like citrus fruit, it’s in a category of its own, growing as a collection of berries rather than as one fruit.

Its enduring popularity is due to the variety of foods and drinks it can be paired with, as well as its enduring health benefits.

Go grab a pineapple and craft yourself a nice tropical fruit salad.