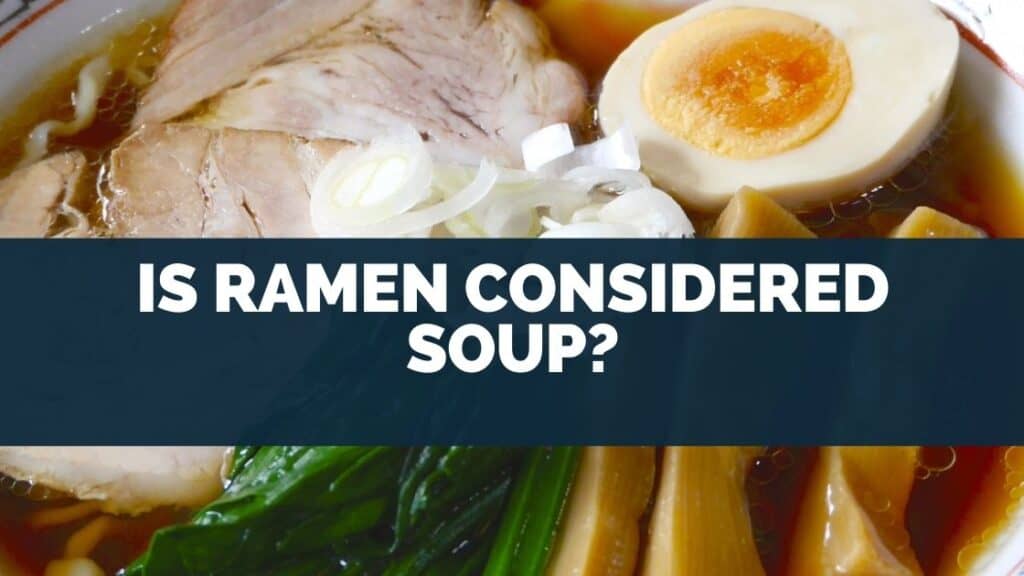 Ramen has spread over the Western world. It has become a social trend, from sophisticated Japanese Asian noodle restaurants to low-cost student food.

Ramen is considered a quick cuisine in Japan, with numerous tiny restaurants and street sellers offering it.  But is Ramen considered a soup?

Ramen is not regarded as a soup, at least not in Japan. Ramen means “pulled noodle.”

Ramen is a bowl of thin, light-yellow noodles that come in a bowl of hot broth made with chicken or pork and flavored with soy or miso.

The two main elements in ramen are soup and ramen noodles that’s what confuses some of us.

Few may call it a soup, while others will call it a noodle dish.

Many people, though, may adopt a middle-ground approach and remark it is as ‘soup noodles.’

Although noodle is a vital element for those, who make ramen, some individuals who consume them regard it more as a soup than noodles.

Few foods are as comforting as a steaming bowl of ramen.

This popular dish has its origins in China, where it was originally known as lāmièn.

It gained popularity in Japan during the Meiji period when Chinese immigrants began opening noodle shops in Osaka and Tokyo.

Today, ramen is enjoyed all over the world, and there are endless variations on the basic recipe.

While ramen is often associated with unhealthy fast food loaded with seasoning and preservatives, it can actually be quite nourishing.

A bowl of ramen typically contains protein, vegetables, and carbohydrates, making it a complete meal.

In addition, the broth is often packed with vitamins and minerals.

So next time you’re feeling hungry, reach for a steaming bowl of ramen!

Go to top
Table Of Contents show
1 Is Ramen A Soup Or Broth?
2 Is Noodles Considered Soup?
3 Is Noodle Soup The Same As Ramen?

Is Ramen A Soup Or Broth? 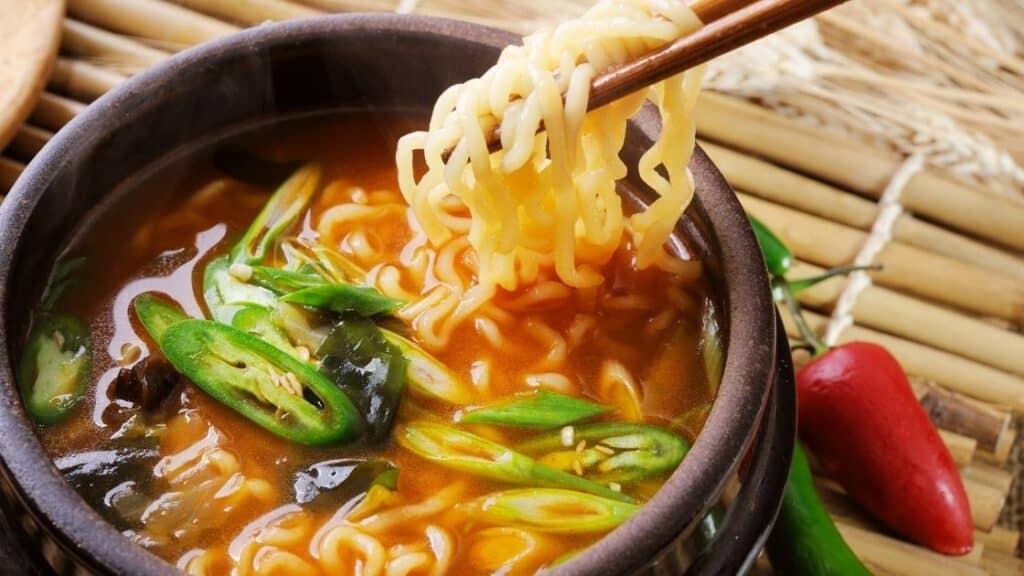 Ramen is neither a soup nor a broth but a type of noodle.

However, ramen is often distinguished by the soup served with it, such as tonkotsu ramen, which is ramen in a broth made from pork bones and is typically served with slices of roast pork.

If there are no noodles within the dish, it isn’t considered ramen.

Soup or broth and ramen come from separate culinary families. Thus, they don’t exactly fit into each other’s categories.

Soup is a catch-all name for liquid cuisine that often uses broth or stock as the foundation.

The soup contains solid food items cooked in a broth of meat, vegetables, or seafood, and when ramen, a type of noodle is added, the dish is frequently called ramen.

Despite the fact that there are as many different kinds of ramen as there are ramen cooks, the three most basic ingredients are the stock, flavoring, and the noodle itself.

The noodle is most commonly made from wheat flour, salt, and water which gives the noodles the color, texture, and aroma.

The soup (shiru) is prepared by boiling a blend of meat, fish, and vegetables.

Chicken and pork are the most frequently utilized meats. 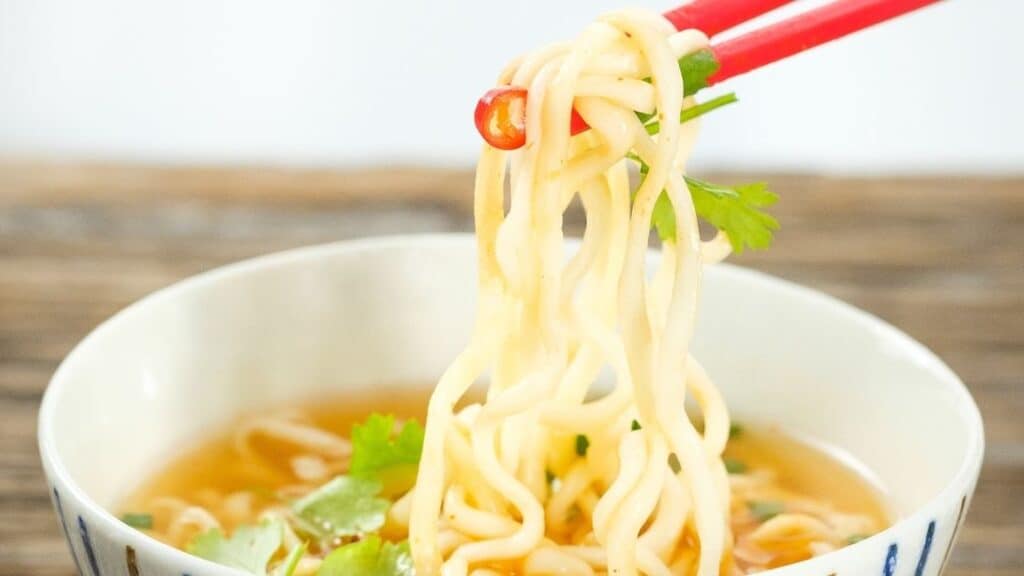 No, noodles are not considered a soup, however, noodle soup is a type of dish that combines noodles and soup.

A variety of soups containing noodles and other ingredients served in a light broth are referred to as noodle soup.

It was driven and brought to Japan by Chinese immigrants in the late nineteenth century.

The combination of warming, nutrient-rich broth, and satisfying noodles charmed Japan’s laborers, who discovered it to be the finest meal to keep them happy after long days of strenuous labor.

Also, noodle soup is ideal for hectic weeknights since it’s quick and easy to make, and you can add whatever meat or veggies you prefer.

There are many ways to cook noodles, you don’t have to stick to soup, especially on hot summer days!

A good stir fry noodle dish is all about the perfect balance of flavors and textures.

One of the most important elements in achieving this balance is the noodles.

They should be tender but not mushy and have a slight bite to them.

This can be achieved by cooking the noodles properly.

First, soak the noodles in hot water for about 10 minutes.

This will soften them and make them more pliable.

Then, drain the noodles and rinse them with cold water.

This will stop the cooking process and help to prevent the noodles from sticking together.

Finally, add the noodles to the stir fry pan and cook them over high heat until they are tender but still slightly al dente.

In addition, you can also steam noodles.

It is a healthy way to cook noodles as it does not require the use of oils or fats.

Simply boil a pot of water and then add the noodles.

Cover the pot and let the noodles cook for 3-5 minutes, or until they are soft.

Drain any remaining water, and then add your desired sauce or seasonings.

Steaming is a great way to cook noodles if you are looking for a healthy option that is quick and easy.

Is Noodle Soup The Same As Ramen? 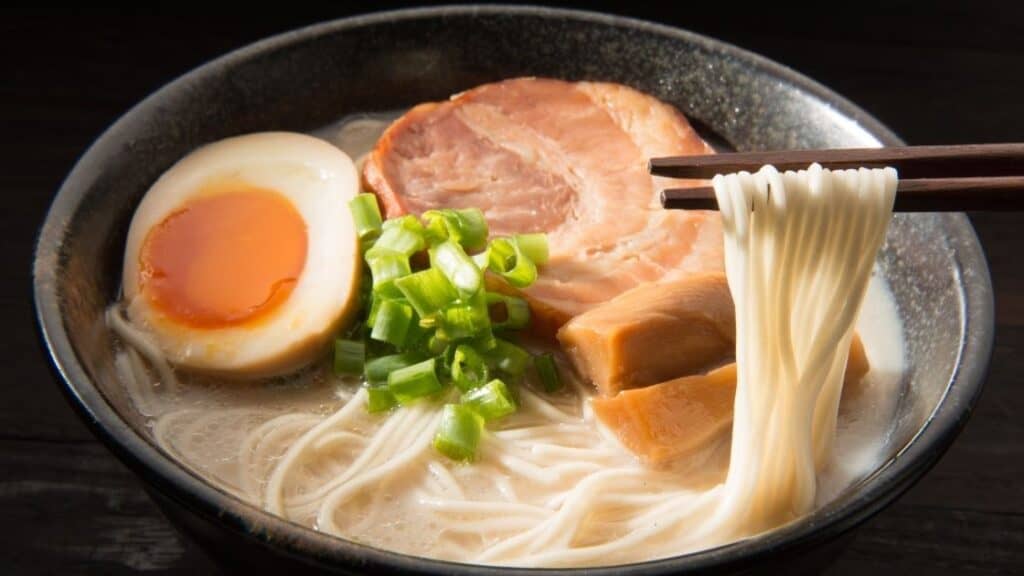 Yes, the ramen dish is a noodle soup, and both terms are frequently used interchangeably.

Ramen is considered a classic Japanese noodle soup that consists of a richly flavored broth, one of many types of noodles, and a choice of meats or vegetables, frequently topped with a cooked egg.

The noodle soup is infused with a tasty broth and garnished with all kinds of ingredients like pork, seaweed, corn, vegetables, and a boiled egg.

Ramen noodle is a popular type of noodle recognized for their rich taste and medium thickness.

This alkaline solution is responsible for your ramen noodles’ springy, bouncy bite.

Aside from “genuine ramen,” there’s a whole market of “instant ramen soups” that simply require heating water. Instant noodles are not the same as traditional ramen.

Ramen noodles tend to be made from scratch, while instant noodles are typically preserved noodles that are dried.

According to a new study, instant noodles may not be as healthy as we thought.

The study found that eating instant noodles on a regular basis can lead to an increased risk of heart disease and stroke.

The problem seems to be the sodium content of the noodles.

A single serving of instant noodles contains approximately 1,000 mg of sodium, which is more than half of the recommended daily intake.

The high sodium content can cause high blood pressure, leading to heart disease and stroke.

If you want to enjoy a hot bowl of healthy noodles, stay away from salt-heavy seasonings and use natural seasonings from vegetables or bones instead.