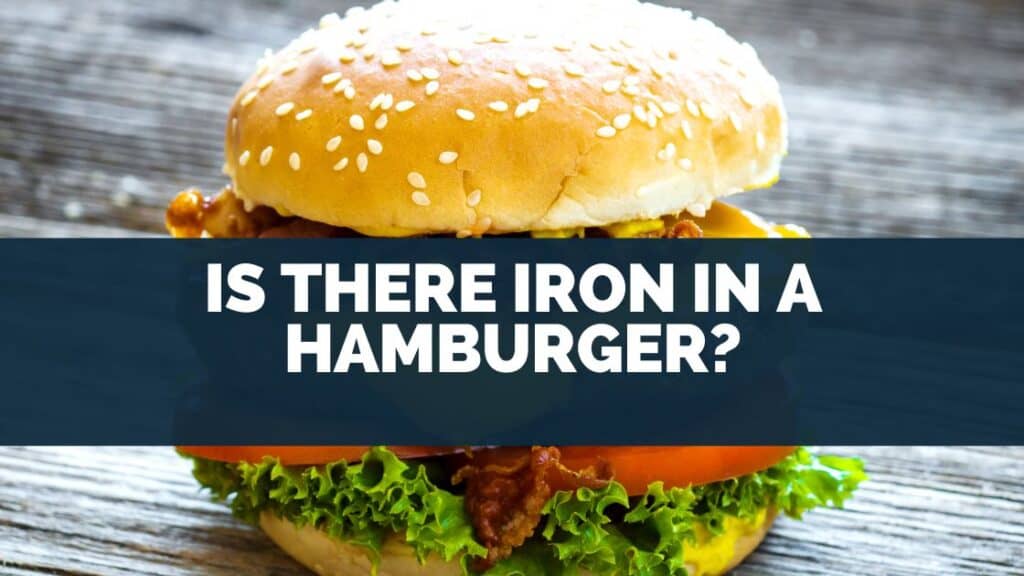 We all know and love hamburgers for their delicious taste and protein content.

However, besides being a carbohydrate and protein boost, is there iron in a hamburger?

The answer is yes, there is! In fact, beef is one of the best sources of dietary iron.

A 3-ounce serving of ground beef contains approximately 3 milligrams of iron, or 16% of the Daily Value.

The iron found in beef is known as heme iron, which is more easily absorbed by the body than non-heme iron.

This makes beef an excellent choice for people who need to increase their intake of this essential nutrient.

However, it’s important to note that hamburgers are also high in saturated fat and cholesterol, so they should be consumed in moderation as part of a healthy diet.

Iron is a mineral that is essential for the body to function properly.

Iron is also necessary for the regulation of cell growth and the synthesis of some hormones.

In addition, it helps to protect the body against infection.

Most of the iron in the body is found in hemoglobin and myoglobin, but small amounts are also stored in the liver, spleen, and bone marrow.

The body needs iron to make new blood cells and replace old or damaged ones.

However, iron is not easily absorbed by the body, so it is important to eat foods that are rich in iron, such as meat, poultry, fish, beans, and dark leafy greens.

Go to top
Table Of Contents show
1 Is Hamburger High In Iron?
2 What Meat Is Highest In Iron?
3 How Much Iron Is In A Regular Hamburger?
4 Do Hamburgers Have More Iron Than Chicken?
5 Are Eggs High In Iron?

Is Hamburger High In Iron? 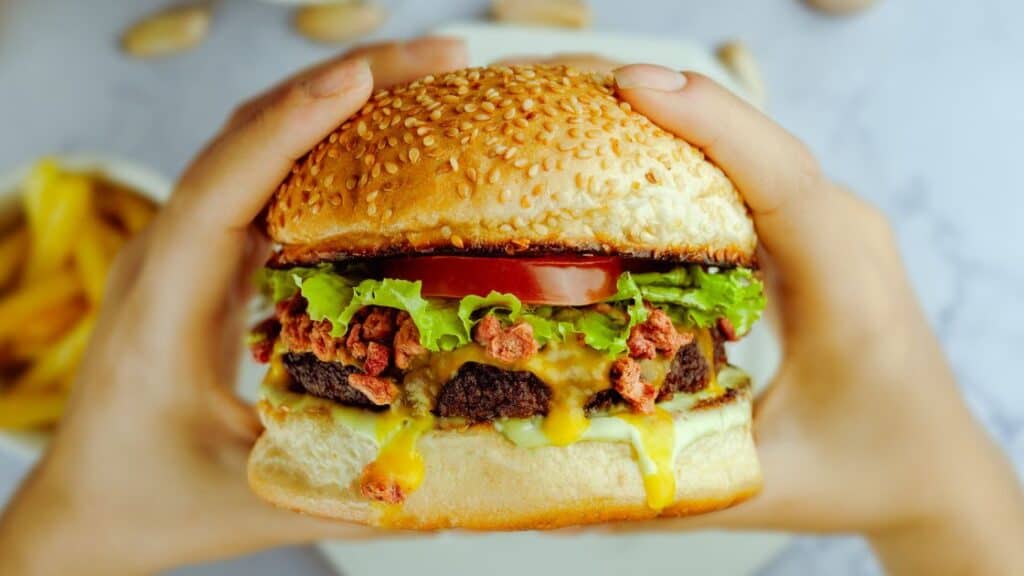 Yes, hamburgers are high in iron.

Beef is one of the best sources of iron. 3 ounces of ground beef contains about 3 mg of iron which is 16% of the recommended daily intake.

Iron is essential for transporting oxygen in the blood and for supporting a healthy immune system.

Though hamburger meat is not a powerhouse of nutrients, it can be a part of a healthy diet when consumed in moderation.

The best way to increase your iron intake is by eating more iron-rich foods such as meats, poultry, fish, beans, and dark leafy greens.

You can also find iron in supplements, but it’s best to get your nutrients from food first.

If you’re struggling to increase your iron intake, talk to your doctor or a registered dietitian who can help you develop a right plan.

An iron deficiency can cause various symptoms, ranging from fatigue and weakness to irritability and difficulty concentrating.

The body needs iron to produce hemoglobin, which is responsible for carrying oxygen in the blood.

Without enough iron, the body cannot produce enough hemoglobin, and oxygen levels in the blood decrease.

This can cause fatigue, shortness of breath, and other symptoms.

What Meat Is Highest In Iron? 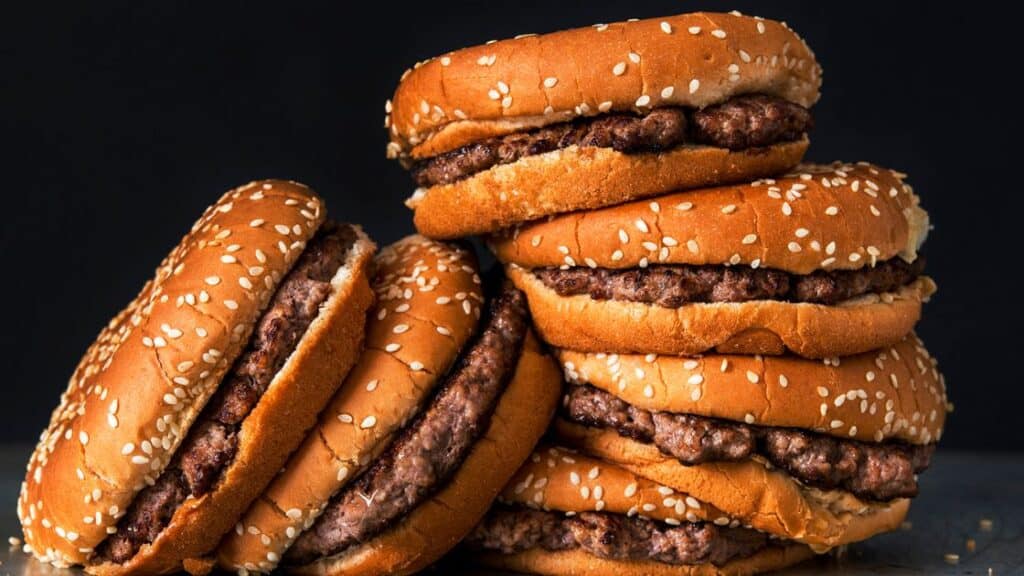 Though many people think red meat as a good source of iron, dark meat from chicken or turkey contains more iron than beef, pork, or lamb.

In addition to dark meat, the organ meats from chicken, turkey, and duck are also higher in iron than other types of meat.

Tofu, tempeh, and soybeans are good sources of iron for vegetarians and vegans.

Adding a food high in vitamin C, such as tomatoes, grapefruit, or strawberries, can help the body absorb more iron from plant-based foods.

While eggs are not as rich in iron as some other foods, they are a good source of this essential mineral.

Each large egg contains around 0.5 mg of iron or around 3% of the daily recommended intake.

This may not sound like much, but it is more than many other popular breakfast foods, such as oatmeal and toast.

Furthermore, the iron in eggs is particularly bioavailable, meaning that our bodies can easily absorb and use it.

How Much Iron Is In A Regular Hamburger? 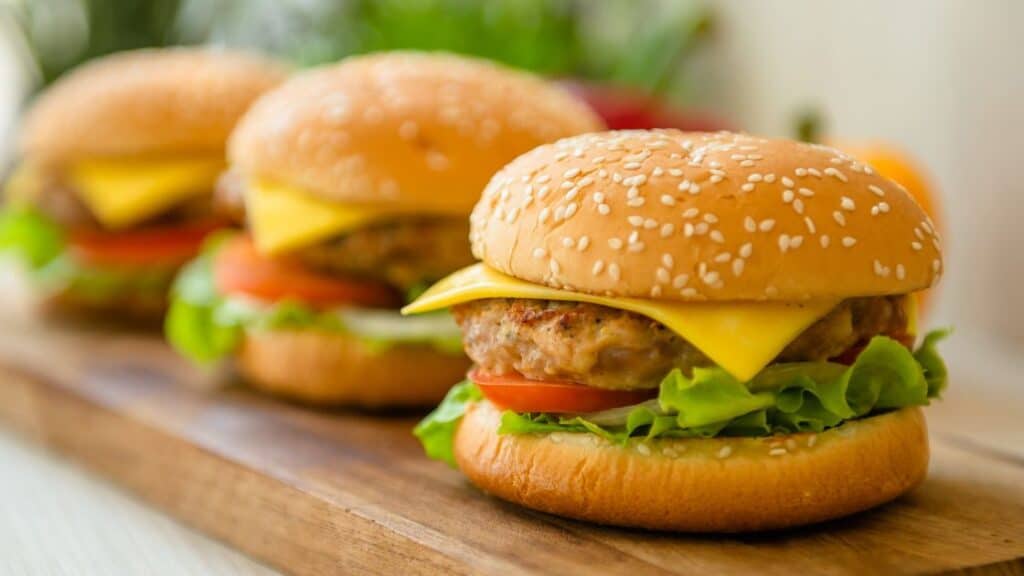 The average hamburger contains between 2.5 – 3 mg of iron, which is approximately 15 – 20% of the Daily Value (DV) for this essential mineral.

However, the amount of iron in a hamburger can vary depending on the type of meat used and the cooking method.

Also, adding other ingredients, such as onions and tomatoes, can affect the overall iron content.

Therefore, it is important to consider these factors when determining how much iron is in a regular hamburger.

Do Hamburgers Have More Iron Than Chicken? 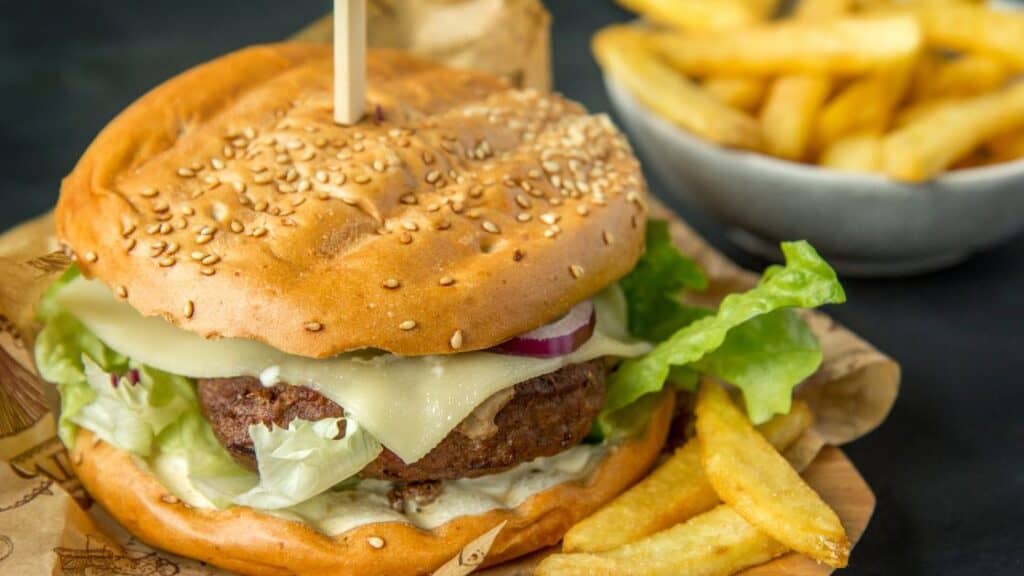 Yes. Hamburgers have more iron than chicken when considering per serving size.

When looking at the recommended daily value for iron, chicken contains 7% while hamburger has 13%.

The main reason for this difference is that hamburgers are typically made with red meat, which contains more hemoglobin and myoglobin, leading to higher iron levels.

White meats like chicken contain less of these compounds.

Thus, if you wish to consume meat that contains significant amounts of iron, you should opt for the hamburger rather than the chicken.

Are Eggs High In Iron? 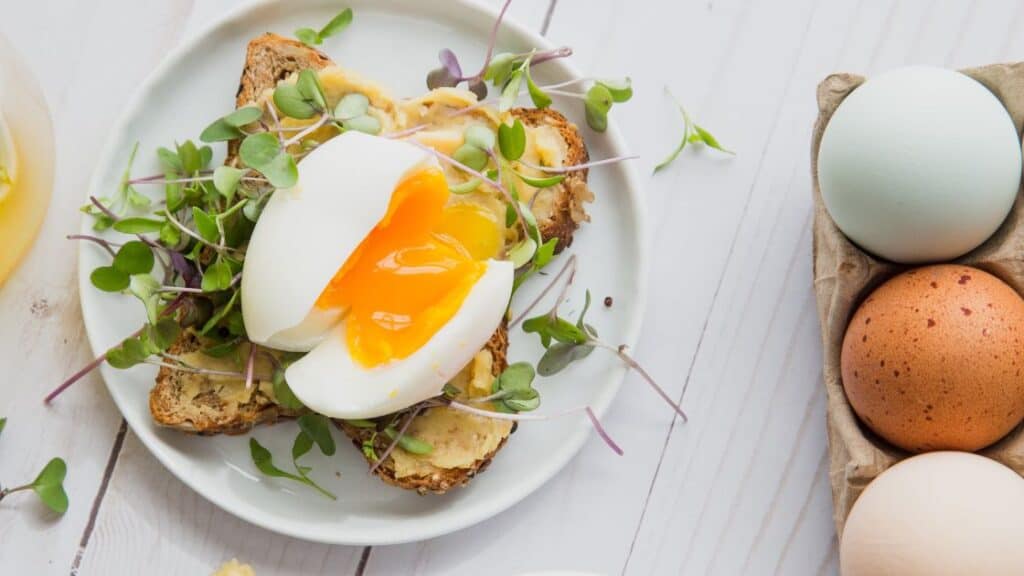 Eggs are not as high in iron as meat, but they are still an excellent mineral source.

Each egg contains 0.5mg of iron, which is about 3% of the recommended daily intake.

The egg white mostly contains water and some protein, and riboflavin.

Eggs are a good source of iron for vegetarians, vegans, and omnivores.

People who don’t eat meat or poultry can get their iron from eggs, tofu, legumes, nuts, seeds, and dark leafy greens.

The body needs iron to make hemoglobin, which carries oxygen in the blood.

Eggs are a nutrient-dense food and an excellent choice for people trying to increase their protein and iron intake.

The following are the benefits of eating eggs:

In addition to the choline contained in eggs, which is an essential nutrient for the development of the brain, eggs also contain several other nutrients.

For optimum absorption of nutrients, nutritionists suggest expecting mothers include eggs in their prenatal diet.

The choline contained in eggs will also greatly benefit young children as they develop their brains.

Moreover, eggs contain lutein, a nutrient that has many health benefits for the brain and body, including improving cognitive abilities in adults and children.

Long-term weight gain can be caused by eating a diet deprived of essential dietary nutrients.

Egg yolks contain an element called choline, which is found in the yellow part of the egg.

Other foods do not contain large amounts of choline, and the body can only synthesize a limited amount from them.

Eating eggs can provide you with a greater amount of choline and ensure that you get adequate amounts to experience the benefits of this nutrient.

Over a quarter of the recommended daily amount of 550 milligrams of choline can be found in a single large egg.

Intriguingly, studies have also shown that adding choline to the diet contributes to a decrease in body weight in female athletes and a significant improvement in athletic performance in these individuals.

You should not forget to eat the yolk of boiled eggs to receive their full benefits in terms of weight loss and faster metabolism.

Eggs are one of the highest sources of dietary cholesterol, containing about 187 mg of cholesterol per large egg.

The evidence that dietary cholesterol is atherogenic (promotes fatty deposits in arteries) is based on the fact that it is found in foods high in saturated fatty acids.

Unlike other foods, eggs are cheap, dense in nutrients, and contain protein and micronutrients.

The cholesterol in eggs is found to have a negligible effect on total cholesterol levels and the levels of bad cholesterol known as LDL in the blood for most people, according to a study.

HDL levels were increased, which is considered to be good cholesterol.

Heart diseases and strokes are less likely to occur in individuals with high HDL.

An increase in cholesterol intake in the diet has no effect on coronary heart disease risk among diverse, healthy populations.

In addition, including eggs in a regular diet may have several beneficial effects.