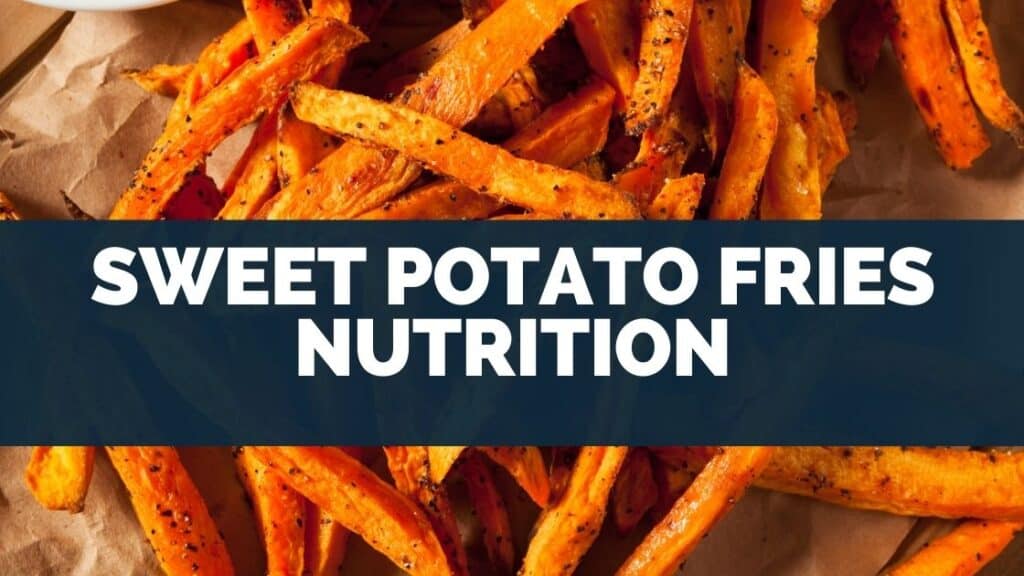 Sweet potato fries are an excellent alternative to french fries.

Although sweet potatoes and regular potatoes seem alike, they are from a completely different family of plants.

In addition to ranking lower on the Glycemic Index, sweet potatoes are lower in calories and are higher in vitamin C and A.

The sweet potato, or Ipomoea batatas, is an underground tuber rich in beta carotene.

Beta carotene that metabolizes into vitamin A is usually found in red and orange vegetables.

Vitamin A is essential for good vision, preventing eye infections, and supporting the immune system.

However, the nutritional value of sweet potato fries depends on the cooking methods with which it is prepared.

The healthiest way of sweet potato consumption would be to drink raw sweet potato juice, followed by boiling, steaming, baking, then frying.

Baking and frying add loads of calories from the cooking oil.

While there is no fat in a boiled sweet potato, sweet potato fries can contain up to 18g of fat per 100g.

Here is the nutritional value of 100g of baked sweet potato fries.

Use only premium oil that has healthful benefits instead of cheap vegetable oil with potentially harmful ingredients.

Some oil suggestions include canola, sunflower, olive, and grapeseed.

In addition, other cooking methods have similar results with less oil, like grilling or using an air fryer.

Although boiled sweet potatoes are way healthier than fries, you can’t beat the taste of a sweet potato fry crispy on the outside and tender on the inside.

With these minor tweaks, you’ll be able to enjoy a relatively guilt-free snack in the comfort of your own home.

Russet potatoes tend to be drier, while the Yukons are creamier and more tender.

Soak the potatoes in very hot water, allowing them to cook just enough that the insides are nice and tender while the outsides are crisp and not burnt.

Go crazy with the seasoning! Although an essential salt and pepper seasoning can be used, experiment with different spices like garlic, onion, and dill weed to find the perfect fries.

What Is Better, Sweet Potato Or Regular Fries?

The nutritional content of sweet potato and regular potatoes are relatively similar.

However, sweet potatoes are vitamin A powerhouses that contain more fiber, calcium, vitamin C, and potassium.

In addition, they have a lower Glycemic Index, making them suitable for people with type-2 diabetes.

Although they look similar (and are even named similarly!), sweet potatoes and regular potatoes are from two separate families of plants.

In the US, sweet potatoes are sometimes mistakenly called yams.

Although they look similar, yams are from the Dioscoreaceae family and are not botanically related to sweet potatoes.

To compare the nutrition of both fries, here is a nutritional comparison of 100g of skin-on baked sweet potatoes and potatoes.

As you can see, while mostly similar in nutritional content, the apparent bonuses of sweet potatoes are higher fiber, calcium, potassium, and vitamin C.

However, the most significant difference is the high levels of beta carotene found in sweet potatoes.

Beta carotene is a powerful antioxidant that fights free radicals in the body.

Free radicals are unstable molecules that can damage your cells if left unbalanced by antioxidants.

An imbalance of free radicals and antioxidants leads to a condition called oxidative stress, where cell tissues break down and cause DNA damage.

In addition, sweet potatoes have a lower Glycemic Index (GI) than potatoes.

The GI is a system that ranks food from 0 to 100 on its effects on blood sugar levels.

The GI of boiled sweet potatoes is 46, while that of a boiled white potato is 83.

However, frying or baking sweet potatoes dramatically increases the GI.

A baked sweet potato has a GI of 94, making them unsuitable for type-2 diabetes.

People with diabetes that want to include carbohydrate and nutrient-rich sweet potatoes in their diets can boil or steam them instead.

Can You Freeze Sweet Potato Fries? 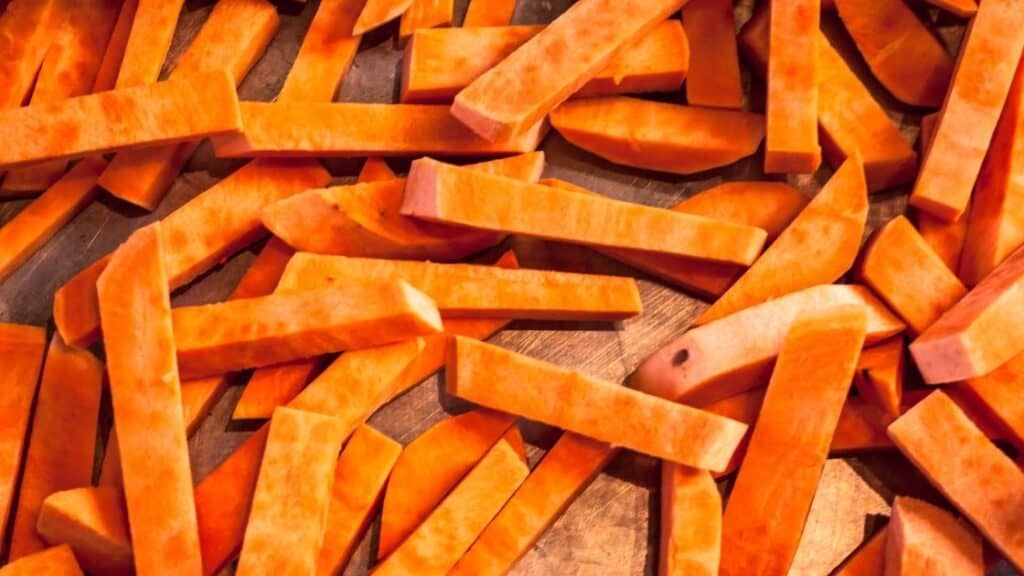 In fact, it is way more time and effort efficient to make up a big batch and freeze them in portions for later use.

However, when freezing sweet potatoes, they have to be partially baked or blanched to remove the water, or they can turn mushy or water.

In addition, blanching or baking lightly before freezing will slow the enzymatic reactions that might cause the fries to lose flavor and texture.

Which Is Healthier, A Potato Or Sweet Potato? 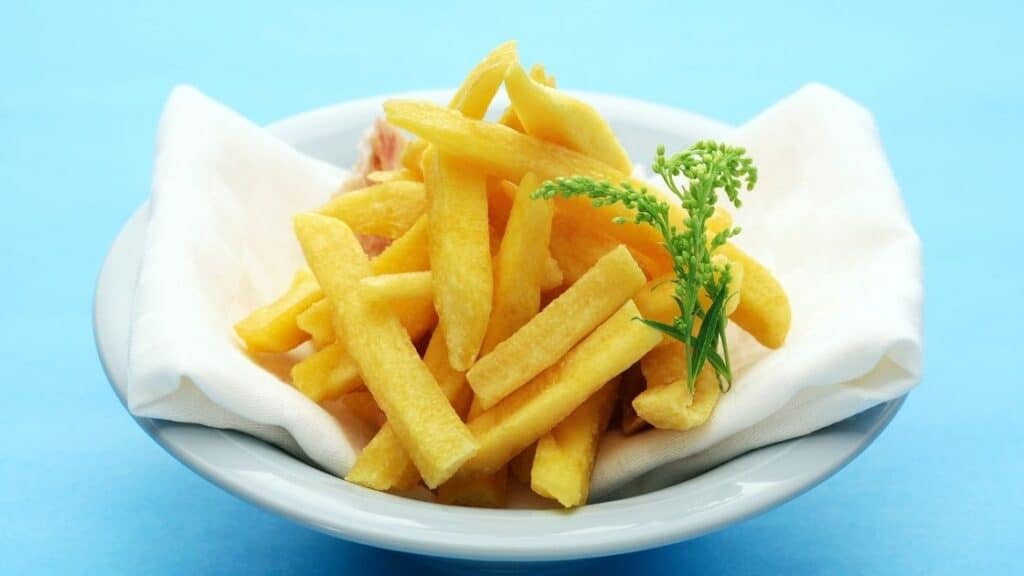 While they both have similar nutritional content, sweet potatoes have more vitamin C, calcium, potassium, and fiber.

In addition, sweet potatoes have a lower Glycemic Index (GI) and are packed with beta carotene.

While both look similar, potatoes and sweet potatoes are from a completely different family of plants and are very distantly related botanically.

Comparing both side by side, the nutritional content of both are:

Beta carotene is a powerful antioxidant that converts into vitamin A.

Antioxidants balance the free radicals in your body, preventing oxidative stress that could lead to severe illnesses like heart disease and cancer. 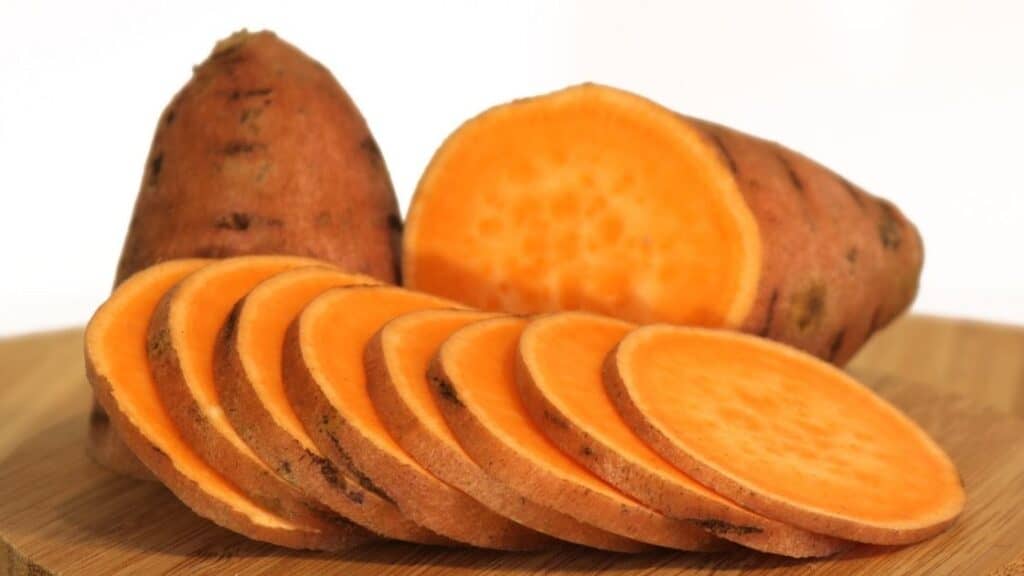 They are a type of white potato that originated from South America and were named such because of the integral role they played in the Great Irish Famine in the 1800s, one of the worst agricultural disasters of all time.

The most common Irish potatoes are red or white.

Irish potatoes are a specific type of white potato that is now cultivated all over the world.

The Irish potato comes from Solanum tuberosum, a plant from the same nightshade (Solanaceae) family as the common white potato.

The sweet potato comes from the Ipomoea batatas plant, part of the Morning Glory family of plants, or Convolvulaceae.

Although they both have similar nutritional content, the sweet potato has higher fiber, calcium, potassium, and vitamin C.

In addition, sweet potatoes have a lower Glycemic Index, the ranking system from 0 to 100 that ranks foods on their effects on blood sugar levels.

The GI of boiled sweet potatoes is 46 while that of a boiled white potato is 83.

This potent antioxidant protects cells and balances free radicals, preventing oxidative stress and lowering the risk of severe illnesses such as heart disease and cancer.