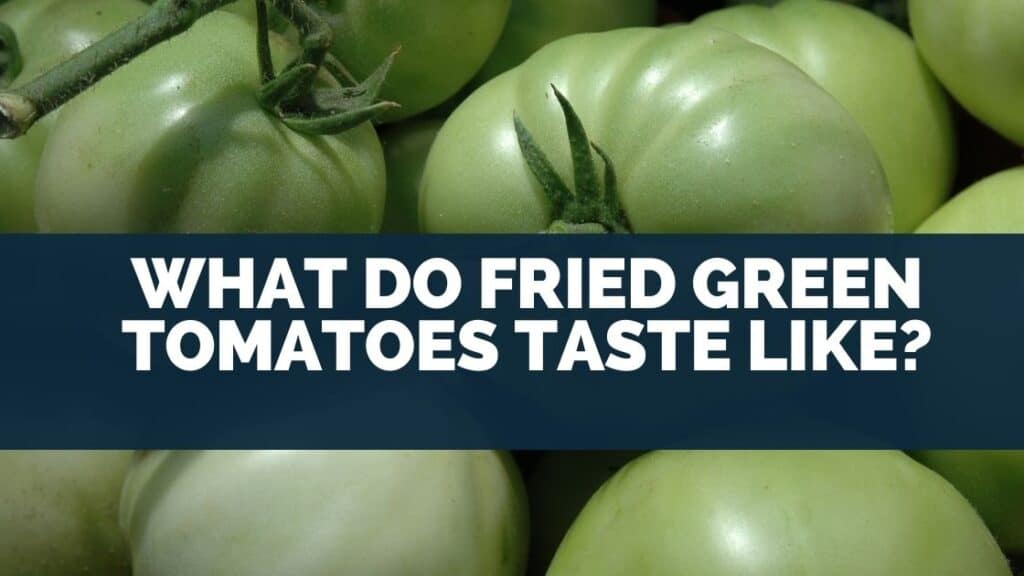 Fried green tomatoes are not the most common food you’ll find at restaurants.

Unless you grow your own tomatoes you generally don’t have access to green tomatoes because they aren’t sold in stores.

Therefore, you may be wondering what fried green tomatoes taste like, here’s what I found.

They taste like a regular tomato but are more sour, and don’t have any of the sweetness of a red tomato.

They are generally battered, so they also take on the flavor of the batter and oil.

Most people report they are very delicious and go well in burgers, on their own, or dipped in ranch dressing.

Today, I will explain what fried green tomatoes actually are, how they relate to unripe tomatoes.

Whether they are the same thing as tomatillos, and if fried green tomatoes taste like tomatillos.

By the end of this article, you will know exactly what fried green tomatoes are. 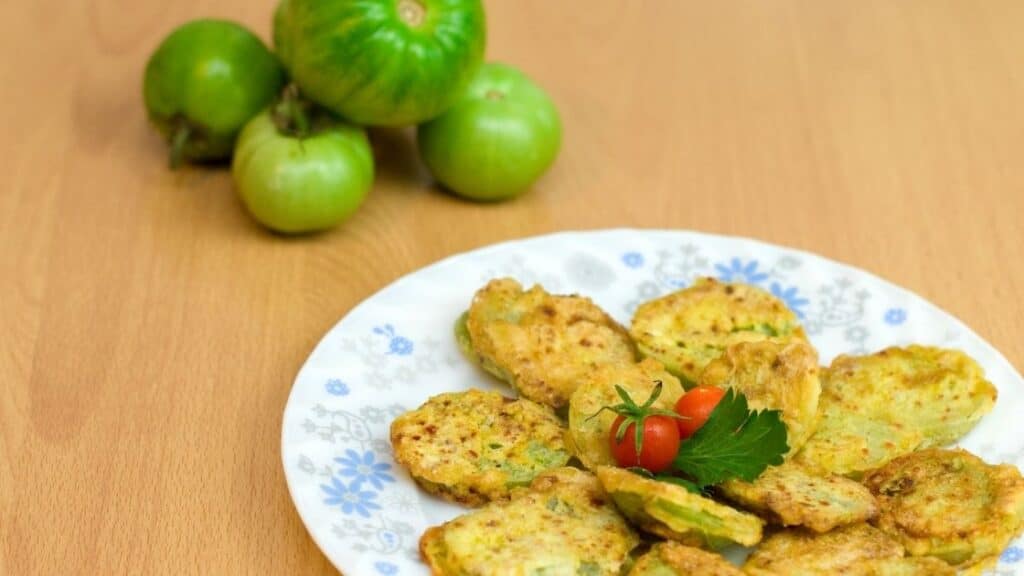 You may have come across fried green tomatoes on a restaurant menu, or eaten them at a gathering or catered event.

Various fruits and vegetables come in a range of colors, so you may be wondering whether green tomatoes are a different variety of tomatoes or if they’re unripe tomatoes.

Fried green tomatoes are unripe tomatoes that have been fried.

At the end of a tomato plants’ life cycle, there are often green tomatoes on the plant that haven’t ripened before the plant dies.

Green tomatoes will ripen after being picked or can be consumed when green.

It’s also fine to pick tomatoes when they’re green at any time during the growing season.

For example, when the tomatoes first form on the plant and are green you can pick them.

But, generally, when growing your own tomatoes there is also a surplus of green tomatoes once the plant dies when the weather becomes much colder in autumn and winter.

The plant becomes brown and dry, and there are green tomatoes left on the plant that hasn’t had time to ripen yet.

Unlike some other fruits and vegetables, they are perfectly fine to eat when they’re not yet ripe.

Here’s a good video that shows a timelapse of the lifecycle of a tomato plant:

You will notice that some tomatoes fully ripen as other tomatoes on the same plant are just forming.

The interesting thing about tomatoes is they will grow to full size and remain green in color.

Then once fully grown they will begin to turn a lighter shade of green and be a completely deep red color when they’re much softer and sweeter.

As a result, once they’ve grown to full size but are still green they can be harvested.

Then at the end of the season once the plant dies you will have a mix of ripe and unripe tomatoes.

And you will have no option but to harvest some of the tomatoes when they’re still green.

Green tomatoes don’t appear to be very popular as I’ve never come across them in stores.

But, you generally can find slightly ripe tomatoes that are a lighter shade of red.

This gives them time to be sold in a store, and turn a deep red or much softer in the pantry or on the kitchen bench within a week or two.

You’ve likely noticed that light red tomatoes are much firmer and have a more sour taste.

They have a distinct flavor compared to tomatoes that are a deeper shade of red.

This generally makes them not ideal for recipes that require red tomatoes, such as making tomato sauce for pasta, and pizza, or making stewed tomatoes or tomato puree.

There are various different products that tomatoes can be made into.

These make adding tomatoes or the tomato flavor to recipes more efficient.

For example, you can make a whole batch of strained tomatoes, or tomato paste in one go.

Then use them in small amounts over three months or so.

This also preserves tomatoes so that they don’t spoil.

Green tomatoes harvested when they’re a deep green to light green color tend to take much longer to ripen and can take as long as a month or two.

There are a few tricks to make them ripen faster such as keeping them in a warm place or in direct or indirect sunlight.

Also, if you place a ripe banana or apple touching or very close to them they will ripen faster. 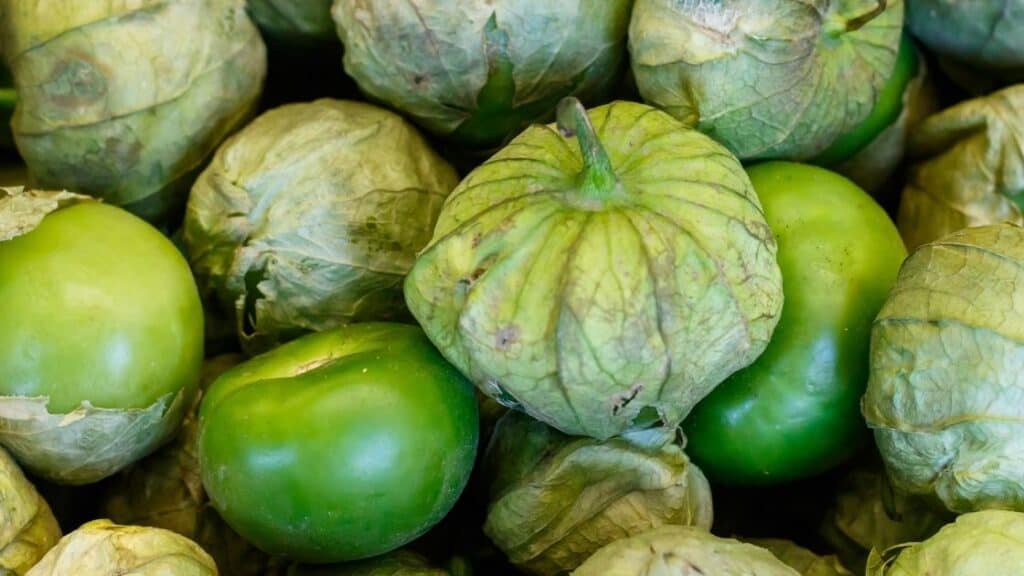 Tomatillos are very similar in appearance to green tomatoes.

Both have a tomato-like flavor and are quite tart when consumed raw but tomatillos have a unique flavor to them that is unlike green tomatoes or anything else.

The taste of tomatillos is unique, and they need to be tasted to understand what this flavor is.

Kind of like if you were to try to explain to someone what a mango tastes like.

You would be a bit stuck with well, it’s kind of sour and tangy, and kind of sweet, but it doesn’t taste like anything else and has a flavor that is unique to mangoes.

But, tomatillos definitely have a tomato flavor to them. Also, they are the main ingredient in salsa verde, so if you’ve tried that you’ll have an idea of what they taste like.

Are Green Tomatoes the Same as Tomatillos? 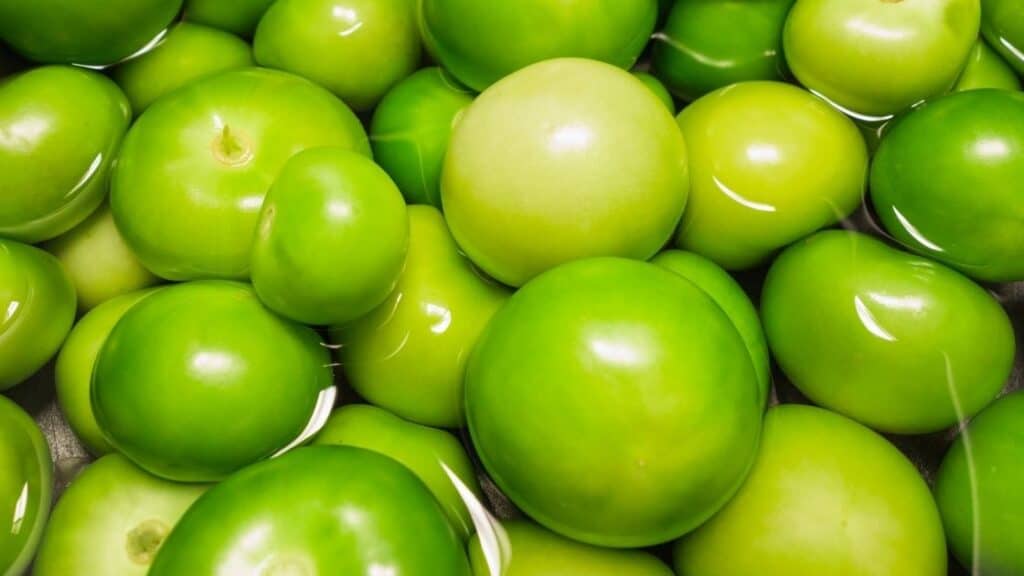 Green tomatoes and tomatillos are almost identical in their appearance.

Often tomatillo’s get called green tomatoes in English because tomatillo is a Spanish word.

But are they in fact the same fruit/vegetable?

Green tomatoes are not the same as tomatillos.

Green tomatoes and tomatillos are two different species of plants.

Green tomatoes are unripe tomatoes that haven’t turned ripe yet, whereas tomatillos are mostly consumed when they’re ripe.

Tomatillos have a papery husk around them that is very easy to remove.

Which is very similar to the husk of a gooseberry, if you’ve ever seen those.

Like tomatoes, they come in a range of colors, but green and pale yellow to very light browny green are common.

Tomatillos have a different structure on the inside to tomatoes, where the seeds are more embedded into the flesh, rather than being separated into distinct chambers like green tomatoes.

Tomatillos have a tart flavor when raw, but become incredibly delicious when cooked.

I explained the answer to this question in this article about if it’s OK to eat green tomatoes raw.

Tomatillos and unripe tomatoes (green tomatoes) are both in the same botanical family.

This is the Solanaceae also called the nightshade family.

This family of plants includes: