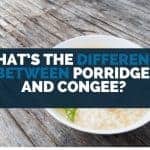 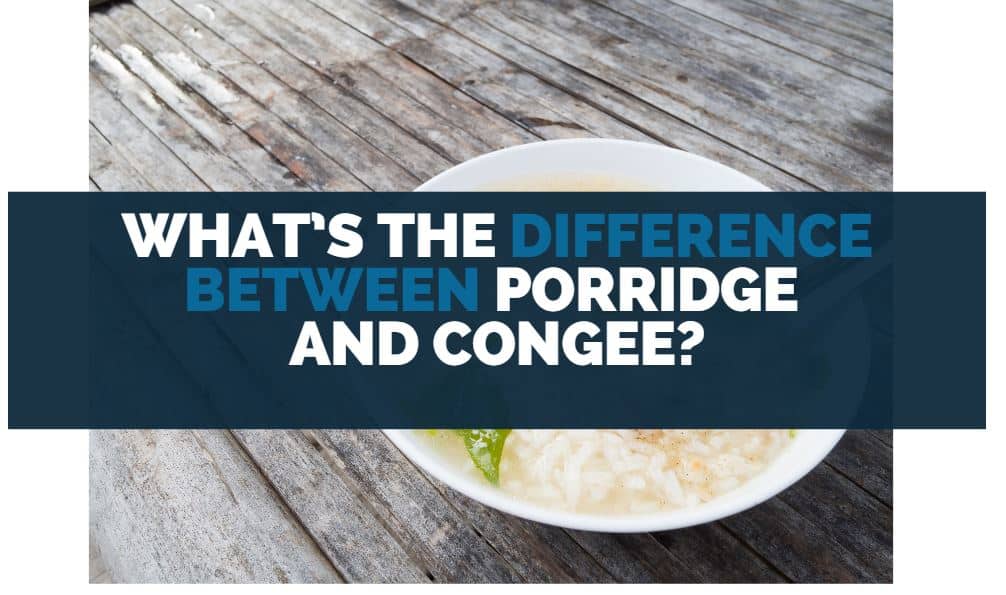 Congee looks like porridge, but I was curious what the differences really are between them.

I’ve not really come across congee myself so researched this query and here’s what I found.

So, what’s the difference between porridge and congee?

But, they are made in a similar way where they are boiled in water.

However, congee is boiled many times or over a very long time until the rice breaks into small pieces.

There are some differences in how they are normally served.

So, below, I’ll explain how congee is normally served, and how it is made.

How Is Congee Made, What Is It Served With, And When Is It Eaten? 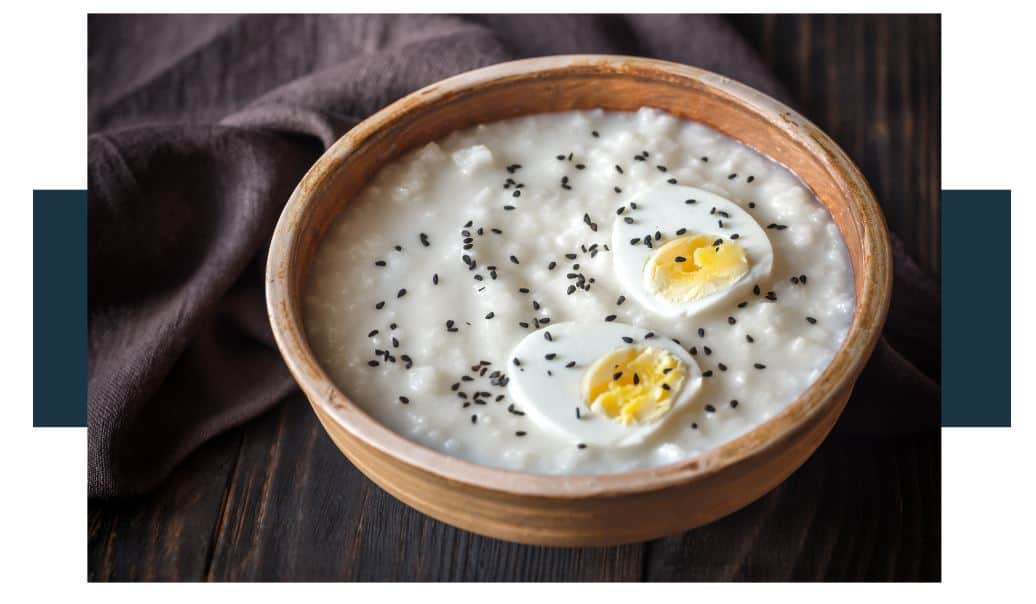 A version of congee is found in the following countries:

As you can see it is found in every Asian country and the only non-Asian country that you find ‘rice porridge’ or congee is in Portugal.

According, to The New Humanitarian 90% of the world’s rice is grown in Asia. Which makes sense why congee is so popular there.

Congee can be made in a rice cooker that has a congee setting.

If you cook congee that way, it’s left to boil overnight.

When you make rice the standard way it maintains its shape.

But if you boil it for a very long time with enough water that the rice remains submerged, it breaks down, and the small particles absorb the water until it forms a thick paste.

It can take quite a while for this to occur, and it’s boiled over many hours.

Congee was traditionally used instead of standard rice for people who are sick, the elderly, and very young children.

Because it’s much easier to chew and digest.

When someone is weak with sickness, old, or recently weaned off of milk they can find it hard to chew and digest rice that’s cooked in the normal way.

So, congee was a good alternative to rice cooked in the normal way as rice makes up a large part of the Asian diet.

And it was readily available.

Nowadays you can find rice in almost any country and many Western people and other countries love to eat it.

What Is Congee Served With? 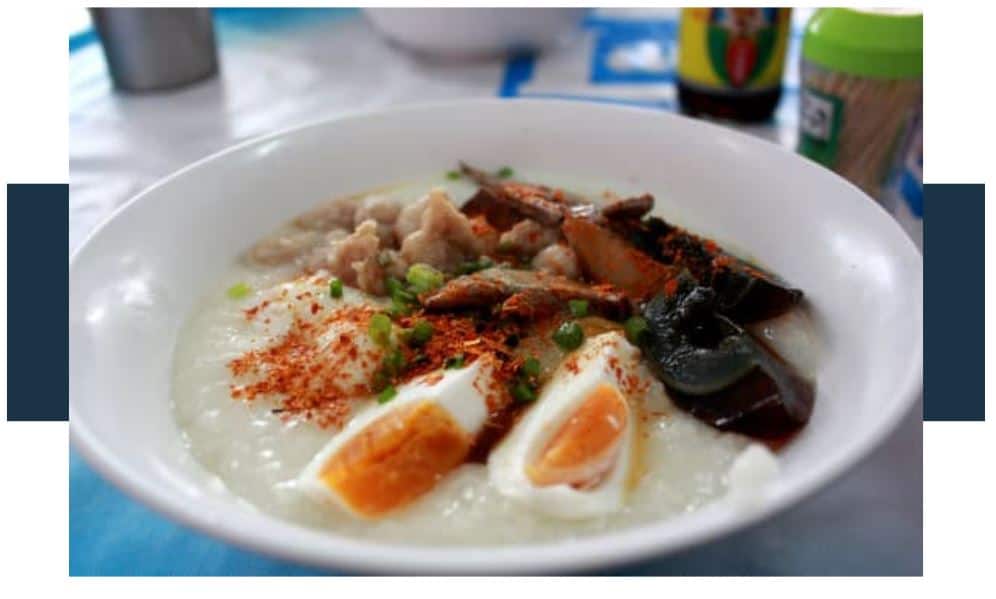 Congee is typically served with savory foods, such as meat, fish, eggs, and vegetables, according to Wikipedia.

So, it’s very different from porridge which is served with sweet foods such as honey, sugar, bananas, berries, and dried fruit.

There is much debate about what the best porridge topics are, but I’ll leave it for you to decide.

When Is Congee Eaten? 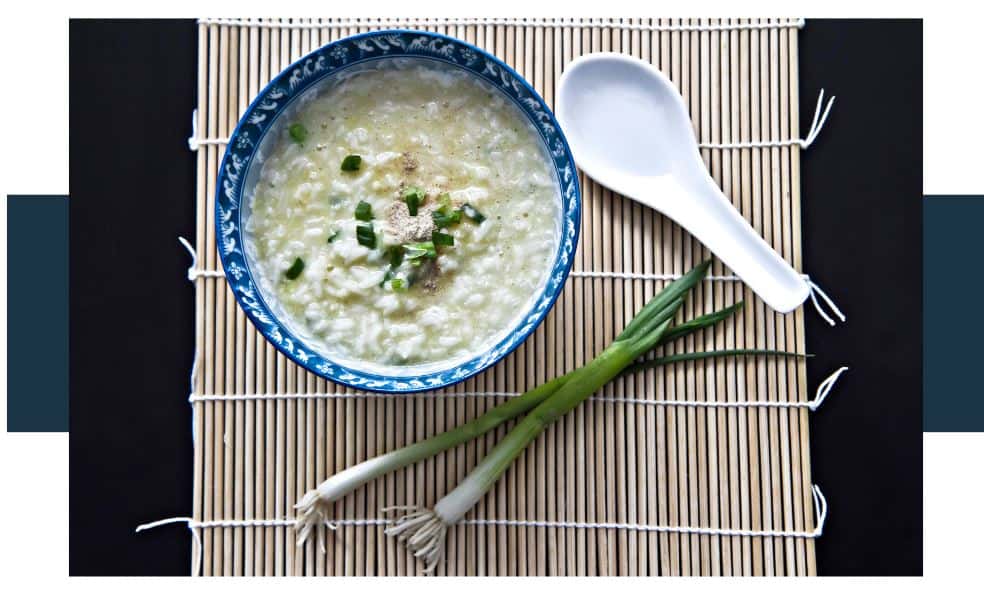 Congee is traditionally a breakfast food, but in recent times it is eaten at any time of the day or night.

Since, restaurants have trended towards remaining open almost every hour of the day or night.

Why Is Congee Called Congee? 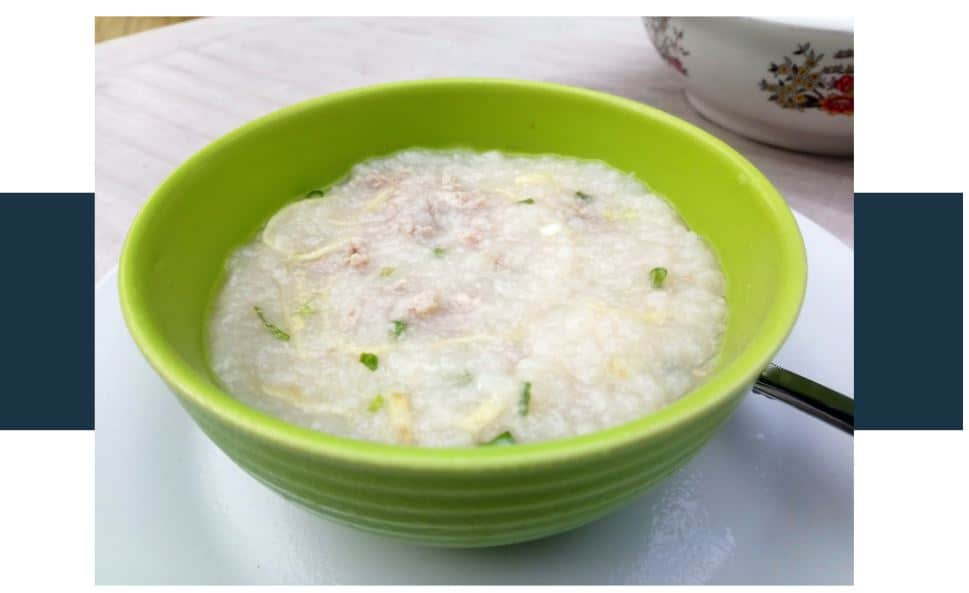 Congee is a word from the Tamil word ‘kanji’.

The Tamil language is spoken by the Tamil people.

There are roughly 76 million Tamil people, and their history goes back 2000 years.

Wikipedia says that they originated in India. In each country in Asia congee has a different name. But, it’s the same dish.

What’s The Difference Between Jook And Congee? 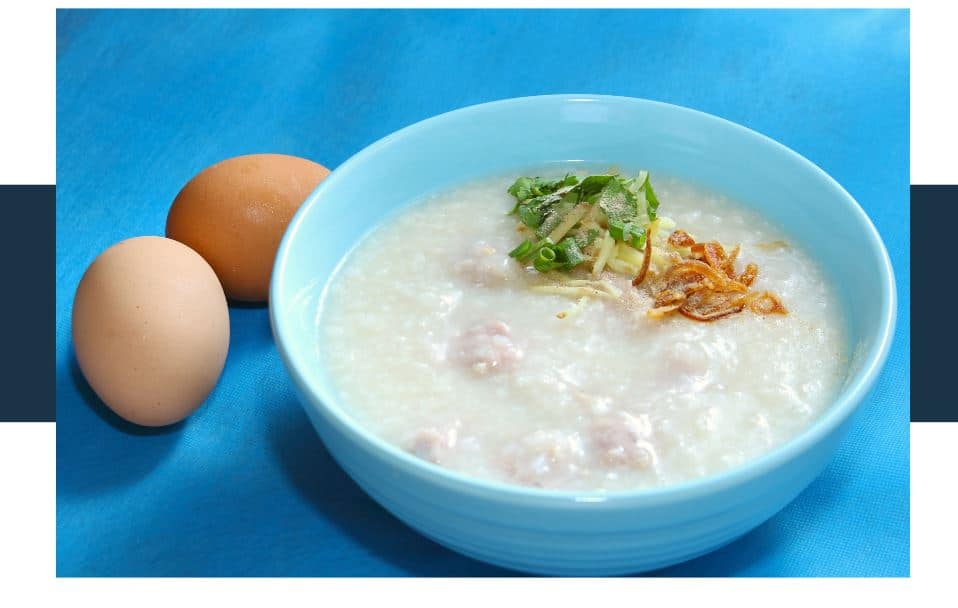 ‘Jook’ is the Cantonese word for rice porridge.

In South and North Korea, they call rice porridge ‘juk’. Jook, juk, and congee are all different words for the same dish.

Which is rice that is boiled for a very long time, with more water than can evaporate, until it turns into a porridge.

Korean ‘juk’ has some variations though, such as being boiled with legumes, grains, nuts, sesame seeds, and pumpkin.

What Is The Difference Between Gruel And Porridge? 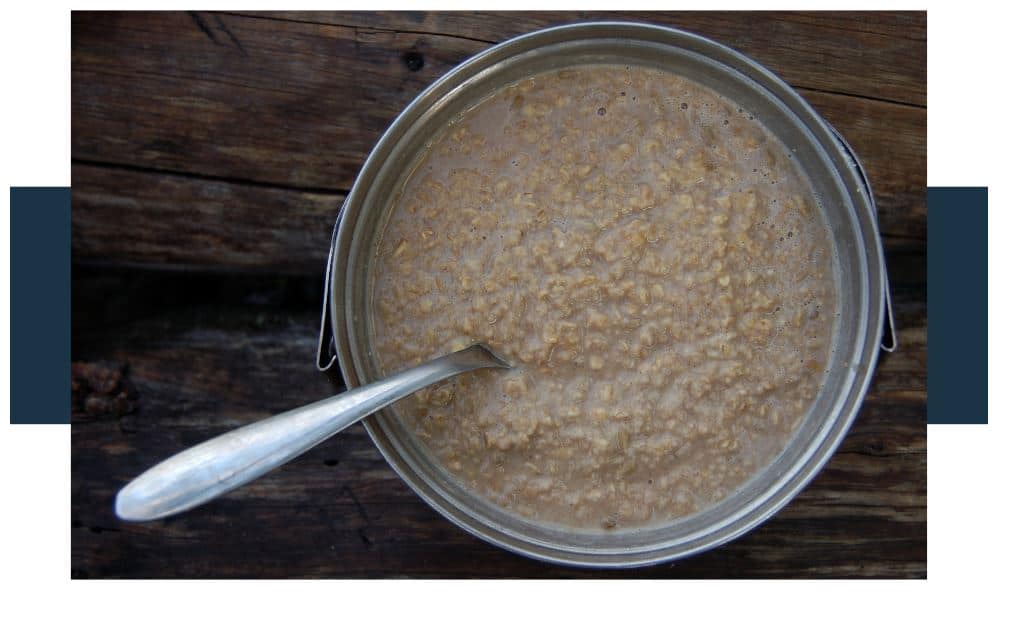 Gruel is the same as porridge except gruel is runnier and soup-like.

Some people prefer to prepare their porridge runny, so technically they are eating gruel.

But, most people don’t distinguish between the two.

And gruel is more of an Old English word that isn’t used much in today’s language.

In everyday language when people say porridge, they mean a porridge that is made from oats.

But, porridge is a catch-all word that can mean a soup-like dish that is made by boiling either oats, wheat, legumes, or barley in water or milk.

It is served hot, and always for breakfast.

Some people prefer their porridge runny, whereas others like it quite thick.

How much milk and water you make it with and how long you boil it for depends on your personal preference.

However, almost everyone loves it as a breakfast meal that will keep you full all the way to lunchtime.

You can also mix lots of different foods with it.

But, it is almost always served with sweet foods such as dried fruit, honey, brown sugar, and ground cinnamon.

Some people use butter or berries.

It is very fast to make and only takes about 10 minutes to boil in a saucepan. Or, 2 to 3 minutes in the microwave.

Depending on how long you boil it and how much water or milk you use you will end up with either gruel or porridge.

But, most people don’t call it gruel anymore, they would just call it porridge.

Gruel means ‘punish’ in old English. I would say it would be a punishment to have eaten porridge with no toppings.

It is also where the word ‘grueling’ comes from. This means work that is like a punishment – for example very hard labor.

Nowadays it’s more used to refer to a ‘gruelling workout’ or a very hard workout at the gym.

Is Porridge Or Congee A Healthy Breakfast? 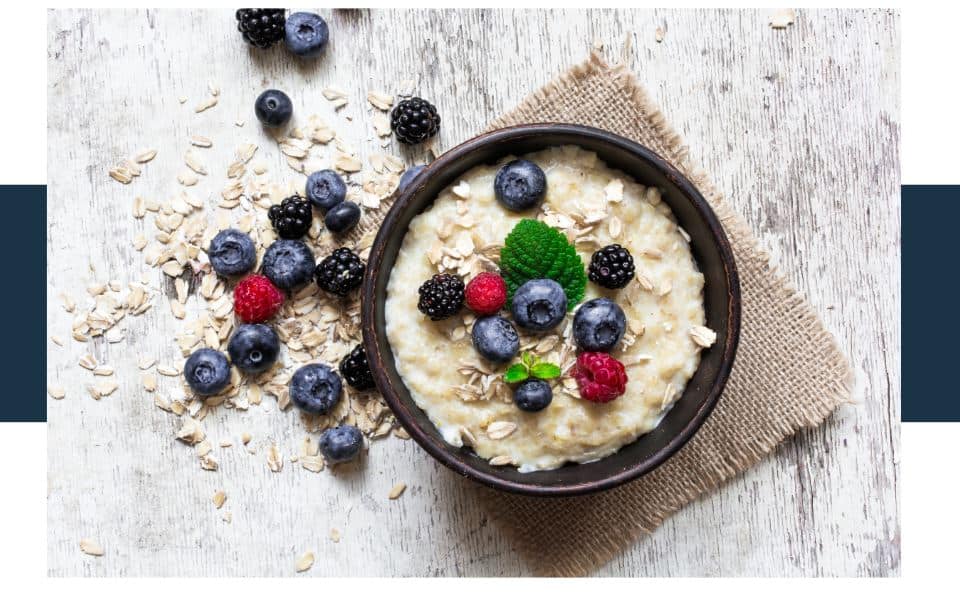 According to the Harvard School of Public Health oats are very healthy and help with the following:

Rice has been eaten as the staple food by many generations of Asian cultures, and the average lifespan of Asian people is about average.

There are no known adverse health effects of eating rice every day.

Therefore, congee is a healthy breakfast. But, as always it can be a good idea to mix it up and eat just fruit, bacon, and eggs, or cereal.

I wrote an article about whether Is Rice Good for Breakfast? which includes the results from scientific studies.

Definitely give them a read if you’re interested in what foods are healthiest to eat for breakfast.

Porridge is different from congee because it’s made from oats, wheat, or barley.

Whereas, congee is made with rice.

Congee takes a lot longer to cook, and can be boiled overnight in a rice cooker that has that setting.

Otherwise, it needs to be boiled on a stovetop for many hours to make the rice very soft and break apart.

Porridge is very fast to make and is ready within 10 minutes on a stovetop or 2 to 3 minutes in the microwave.

Congee is found almost exclusively in all Asian countries, other than a variation being found in Portugal.

Congee is also savory, whereas porridge is served with sweet foods.