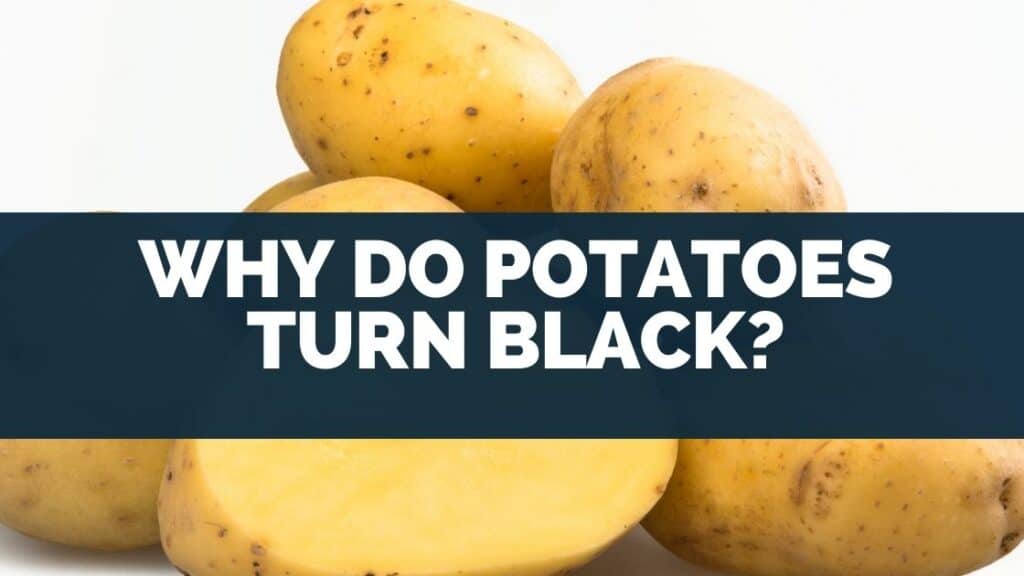 I’m a big fan of potatoes, but the various potatoes I’ve grown and bought are black in the center.

So, I was curious about what causes potatoes to turn black, and here’s what I found.

Potatoes turn black as a result of poor ventilation during storage, temperatures above 90°F (32 °C) while being grown, water logging, and long storage at temperatures of 35 °F (1 °C) or below. It’s known as blackheart or heat necrosis.

Cut potatoes will also start to turn brown due to exposure to the air.

There are few ways to mitigate the effects of potatoes turning brown, as well as, stopping potatoes from developing black hearts.

Read on, where I will explain how to stop potatoes from turning brown and black.

Go to top
Table Of Contents show
1 Why Did My Cooked Potatoes Turn Black?
1.1 Comparison between air temperature and soil temperature
1.2 How much hotter the air is compared to the soil by US state?
1.3 Don’t store uncooked potatoes below freezing temperatures
2 Can You Eat Potatoes When They Turn Black?
3 How to Stop Boiled Potatoes Going Black?

Why Did My Cooked Potatoes Turn Black? 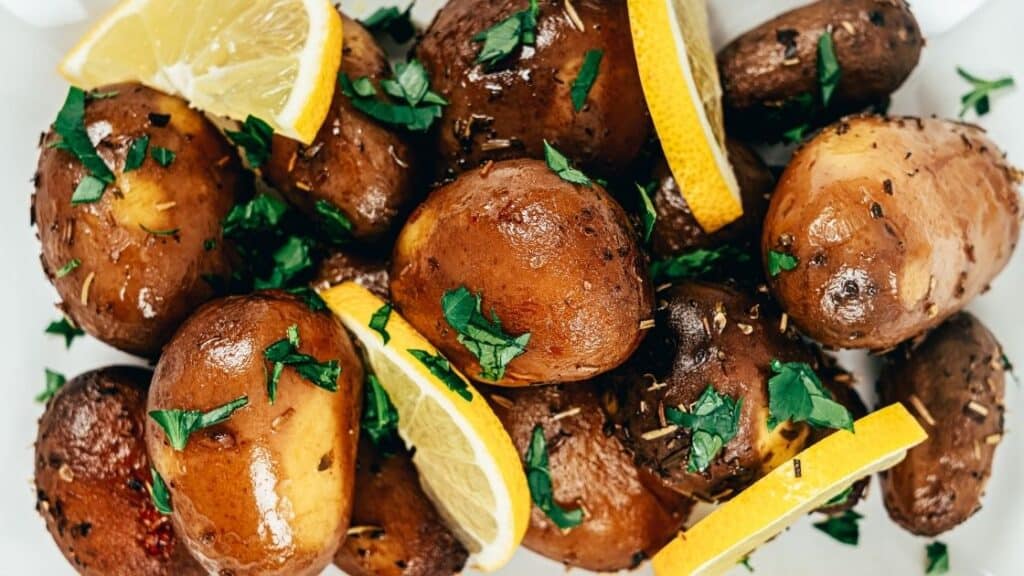 You may find as you cook potatoes that after you mash them, or cut them open they are black on the inside. Here’s what causes it.

Cooked potatoes turn black because they have what is called blackheart.

The cooking process itself does not cause blackheart to develop.

Blackheart which is scientifically called heat necrosis develops when the potatoes are grown in high temperatures that are normally found in tropical climates, or in climates that get very hot in the summer.

Therefore, they are protected from the sun.

However, as you may know, potatoes need to be mounded up.

This is where you continue to pile dirt on top of them as they grow.

Here’s a short video that shows how to mound potatoes:

If you don’t mound the potatoes the surface of the soil can be too hot.

And the potatoes are growing too close to the surface.

As a result, they will be exposed to a lot of heat.

This generally isn’t too much of an issue provided the surface of the soil isn’t above about 90°F (32 °C), according to the Institute of Agriculture and Natural Resources at the University of Nebraska–Lincoln.

I compiled some data that shows the average soil temperature for the top 4 inches (0 cm to 10 cm) of soil for the 20 most populous states in the USA.

And then compared it to the average air temperature.

That way you can get a rough idea about how the air temperature compares to the soil temperature.

Air temperature is what is normally stated on a weather channel or weather website.

I then calculated the difference between the soil temperature and the air temperature, shown in the table below.

How much hotter the air is compared to the soil by US state?

However, there were a lot of variabilities based on the state.

For example, in Arizona, the air temperature was -4 °F colder than the soil temperature.

It also covers cities outside of the USA.

This will greatly reduce the risk of the potatoes having blackheart.

Blackheart is more likely to develop in potatoes that are stored below freezing which is 35 °F (1 °C).

However, it’s widely accepted that storing potatoes in a cool dry place will make them last a long time.

Whereas, in warmer conditions, they will begin to grow sprouts.

Can You Eat Potatoes When They Turn Black? 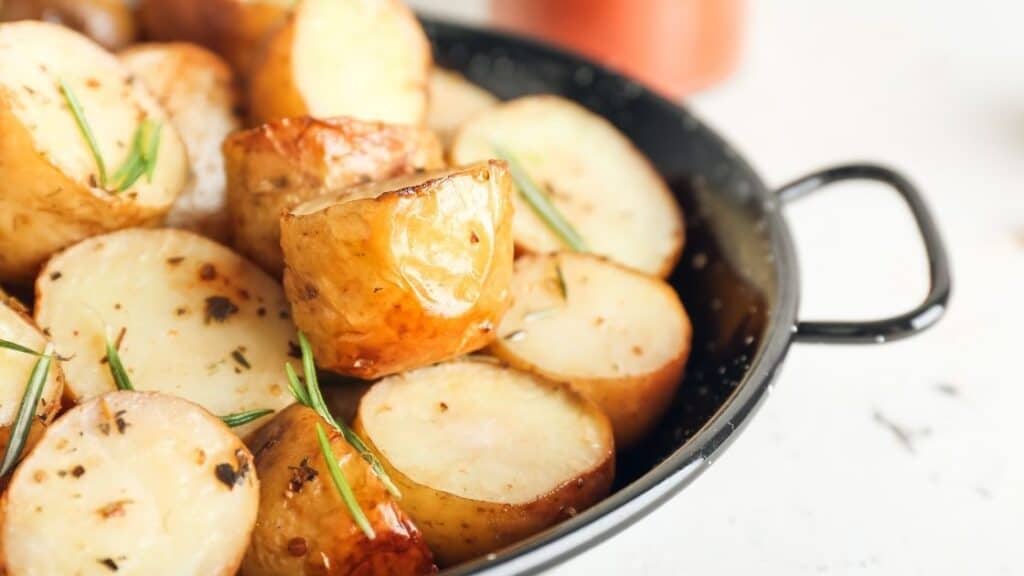 It’s often difficult to know that the inside of potato has developed blackheart until after you’ve cooked it, and if you cook them whole, then you can only discover after they’re ready that they’re black in the middle.

But, can you still eat the potatoes when they turn black?

As a general rule, you should not eat potatoes when they turn black.

It is unappetizing and doesn’t taste good according to Dr. Potato at Idaho Potatoes.

It’s perfectly fine to cut out the discolored sections of cooked potato and eat the rest.

If you bought a bag of potatoes and didn’t cook the whole bag.

Then you can cut the potatoes in half prior to cooking to discard any that have blackheart if you wish.

Doing that can save you from cooking potatoes that you will need to throw out. 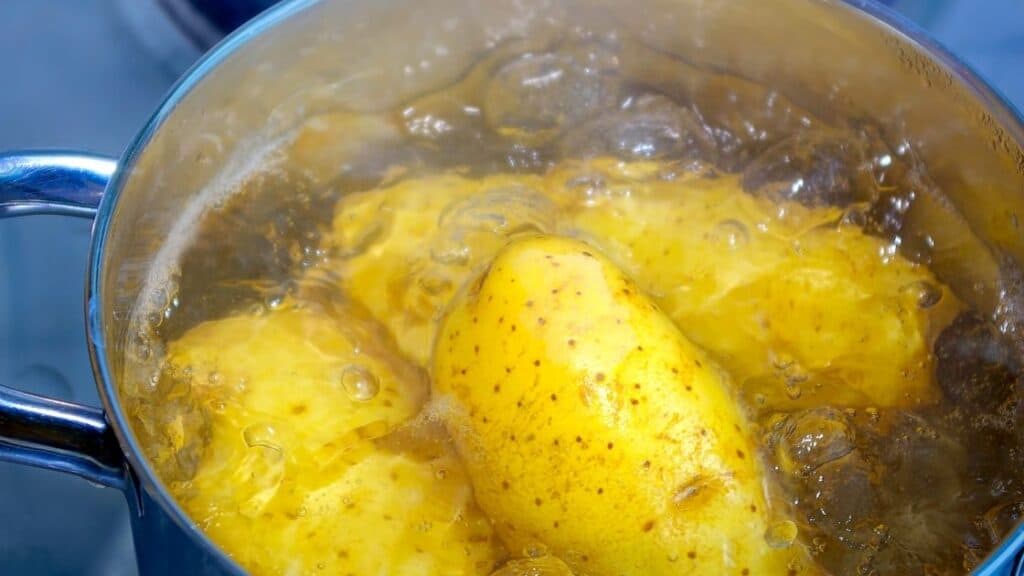 You might have peeled some potatoes, and boiled them whole, only to notice when you cut into them that there are small black spots, or large sections are completely black.

Stored boiled potatoes can also turn black or purple. So, how do you stop this from happening?

Generally, this is caused when boiled potatoes are exposed to air.

So, you should store them in an airtight container.

If the inside of the potatoes is black there is no way to stop that from happening as it occurs when the potatoes are grown as is known as blackheart.

As potatoes are harvested and graded, there is no way to check that they have developed blackheart.

In my opinion, growers are likely aware of the conditions that lead to the development of blackheart, and attempt to stop them from developing as much as possible.

However, during the grading process, there is no way to tell whether a particular potato has blackheart or not.

Interestingly, a study showed that there is a weak link between the size of the potato and how often it will have blackheart.

So, harvesting potatoes early or buying smaller potatoes can reduce the chances that your potatoes have blackheart.

On top of ensuring you don’t store them in conditions that are too cold, and they aren’t exposed to very high temperatures as they’re growing.

I’ve covered the exact temperature conditions for how potatoes should be grown above.