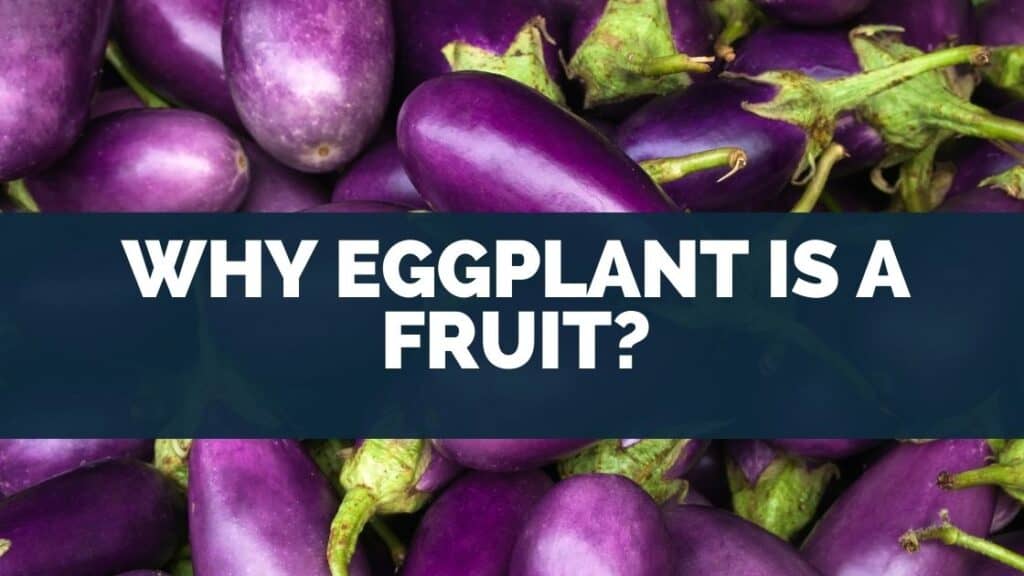 Eggplants or aubergines as they’re also known aren’t sweet at all, however, despite that, they are said to be a fruit rather than a vegetable.

I was curious about why that is and here’s what I researched and wanted to share;

Because eggplant fruit forms from a flower it is classified as a fruit.

Other examples of fruits that are considered vegetables are tomatoes, pumpkin, and cucumber.

Below, I will explain the benefits of eating eggplant, whether it’s ok to eat eggplant everyday, if eggplant is good for you, and when you should not eat eggplant.

Go to top
Table Of Contents show
1 Benefits of Eating Eggplant
2 Is It OK To Eat Eggplant Everyday?
3 When Should You Not Eat Eggplant?
4 Why Is Eggplant Bad for You?
5 Can eggplant upset your stomach?
6 Is eggplant difficult to digest?
7 Should I peel eggplant?
8 Can you eat eggplant peel?
9 Are eggplants easy to grow? 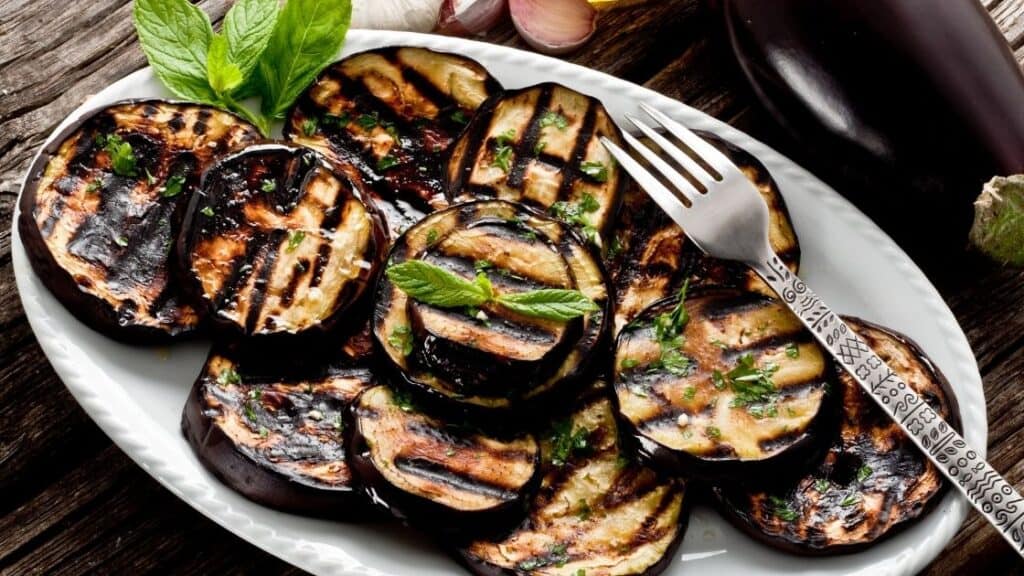 Eggplant is versatile, and each eggplant is sometimes enough for 2 people.

But, are there any nutritional benefits to eating eggplant?

Eggplant contains approximately 5% of your recommended daily intake of:

It also has around the same amount of calories as other vegetables and fruit.

Dieticians generally recommend that you eat 4 servings of fruits and vegetables a day.

And so eating eggplant is a great way to get in the required vegetables.

It can be sliced and fried.

Or roasted in the oven.

Most people find that on their own eggplants taste quite bland, and they need some salt, pepper, herbs, spices, or olive oil to really make it something special.

It can also be juiced together with other vegetables and fruits to create a super smoothie.

For a long time, I wondered whether the juice is as healthy as eating the actual vegetable or fruit.

I recently did some research into this question and wrote about it.

Is It OK To Eat Eggplant Everyday? 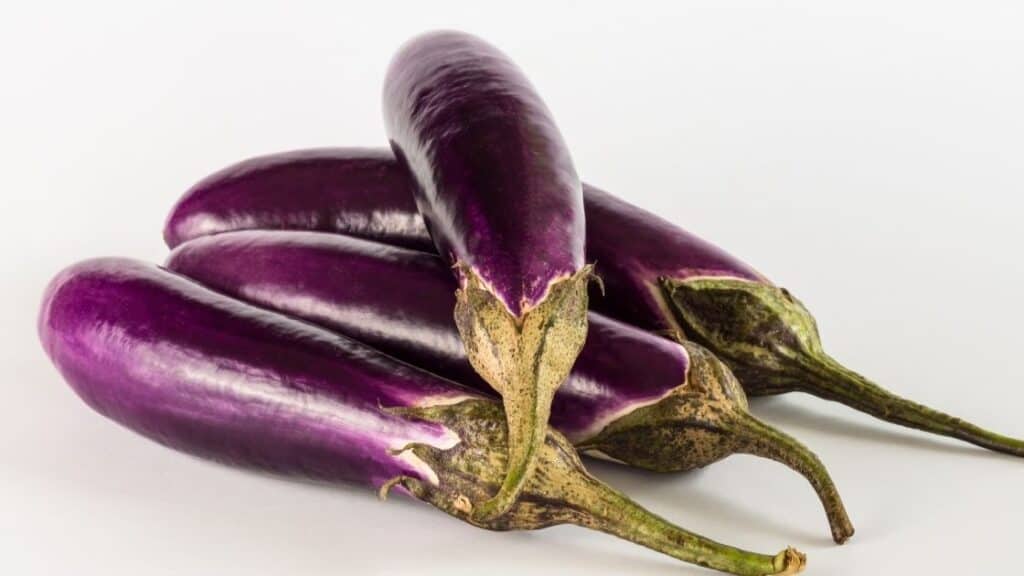 Eggplant can be very plentiful at times, the best time for them to be ready to harvest is in the fall.

So I was curious whether it’s ok to eat eggplant everyday.

One cup of eggplant contains approximately 10% of your calorie requirements for the day.

Therefore, you can eat a good amount of eggplant every day and still consume other fruits and vegetables in your diet.

The advice of nutritionists is to consume a wide variety of food to get a wide range of nutrients.

Therefore, it wouldn’t be a good idea to eat more than about 10% of your diet from eggplant for periods of longer than a week or two.

The reason is that it’s possible you will be lacking in other nutrients that your body needs to retain good health.

When Should You Not Eat Eggplant? 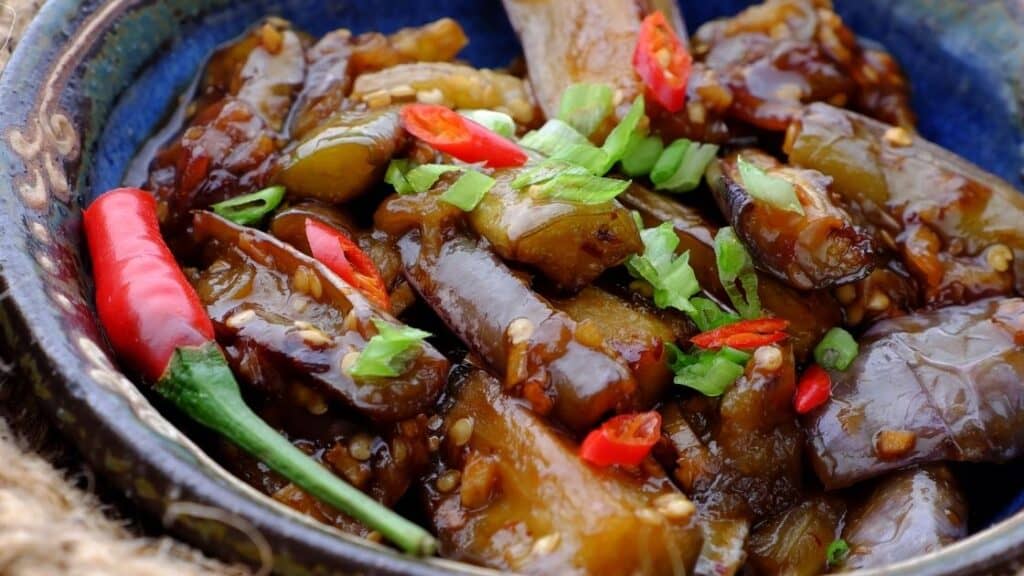 Eggplants are known to be part of the nightshade family and are therefore a cousin of the deadly nightshade.

However, is it poisonous and are there any times when you shouldn’t eat eggplant?

Eggplant is generally fine to eat for anyone at any time.

There are no known drawbacks or side effects from eating eggplant.

The main consideration is to not eat so much eggplant that you can’t eat other foods.

Otherwise, you won’t get all the nutrients you need.

Eggplant tastes the best when it is ripe, which is usually easiest to tell by its size.

Interestingly, eggplant is in the same family as potatoes and tomatoes.

Why Is Eggplant Bad for You? 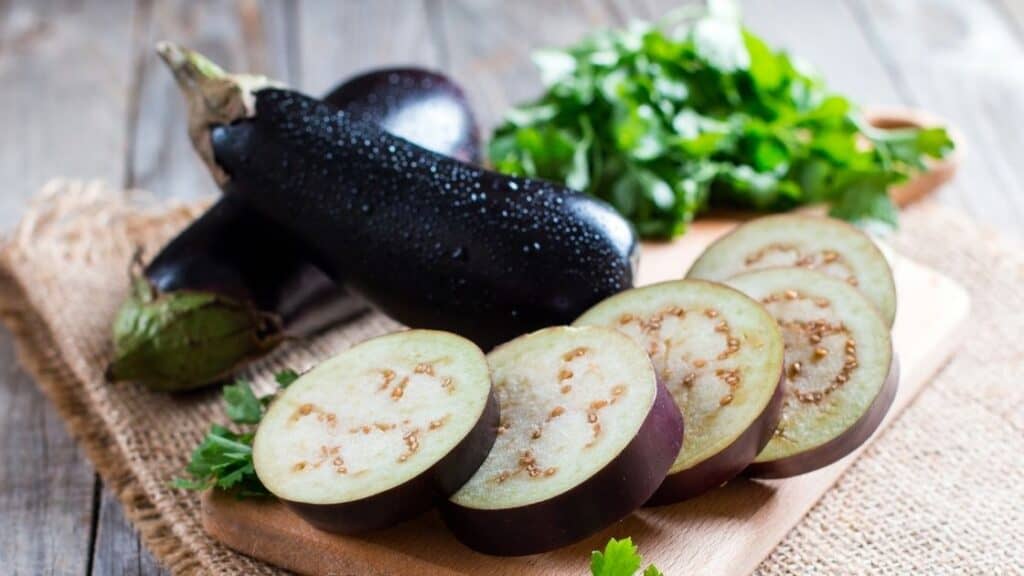 Eggplant can have a bland taste and needs some spices or salt to make it really delicious.

But, it does have a slight flavor of its own.

So, I assumed eggplant doesn’t have that many nutrients or might even be bad for you.

As a whole eggplant is not bad for you.

Eggplant is high in fiber, vitamin C, folate, and other nutrients.

It also counts towards your recommended daily intake of fruits and vegetables.

Therefore, you can eat as much eggplant as you like.

Once an eggplant… plant gets established each plant will continue to produce fruit as long as you keep picking it.

As a result, a single plant can produce 4 to 6 fruits.

Eggplant can survive all winter long, and therefore doesn’t need to be replanted.

But, in some regions eggplants are used strictly as an annual plant, and other plants are put in their place as they die back in winter.

Can eggplant upset your stomach? 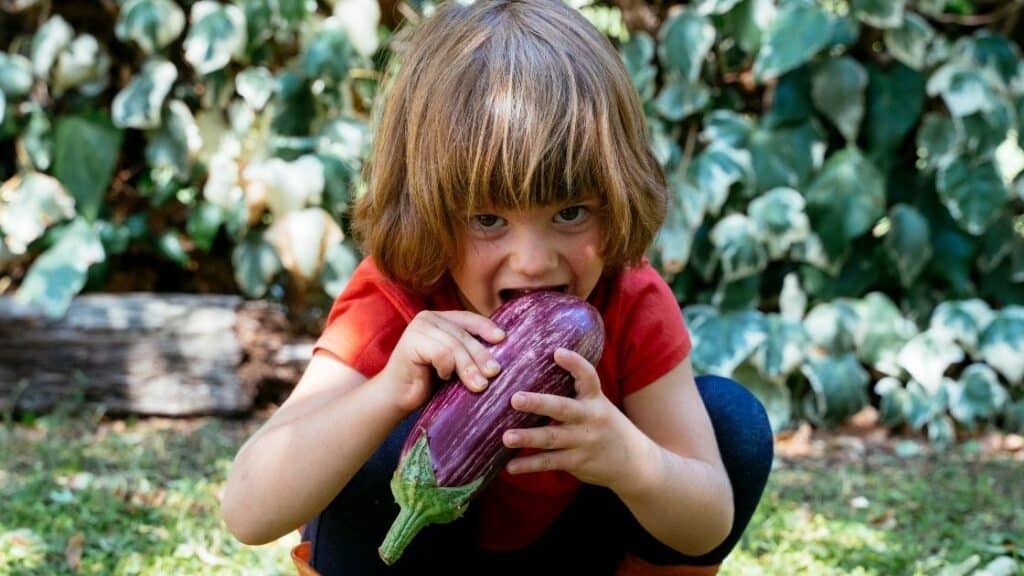 Some time ago I ate eggplant for the first time in a while and I got an upset stomach, since I was learning about the different facts about eggplants I thought I’d research whether eggplant can cause an upset stomach.

As a general rule, eggplant will not cause an upset stomach.

In a rare case where you eat too much eggplant or consume eggplant with too much other food at once, you will get an upset stomach.

But, the eggplant itself won’t give you an upset stomach.

If you’ve recently changed your diet.

For example, if you used to eat a lot of rice with fried vegetables and meat.

But, now eat mostly salads then there can be a period of time where your stomach chemistry adjusts to your new diet.

During this time, your stomach can experience detoxification where you can get diarrhea or have excess gas when you first change your diet drastically.

The reason is that fruits and vegetables have a high amount of fiber that is good for your digestion.

But, if you’re used to eating other food such as bread, dairy, or meat you can get some unusual sensations as the extra fiber works to improve your digestive health.

Is eggplant difficult to digest? 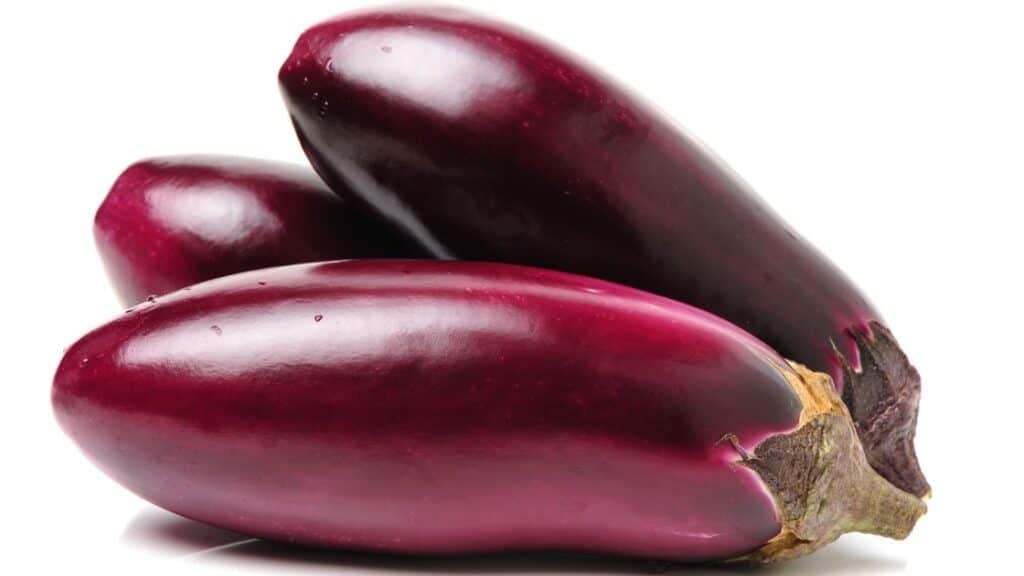 Before being cooked eggplant is particularly firm.

So, I was interested in whether it is hard for your body to digest it.

Eggplants are very easy for your body to digest as they contain a high amount of fiber.

Fiber is known to be good for your digestion, and it’s recommended that you consume around 35g of fiber per day.

One cup of eggplant contains around 5% of your daily fiber needs.

Virtually all fruits and vegetables are high in fiber therefore they are an excellent remedy for constipation.

Constipation is painful and can cause toxins to get into your bloodstream as your stool is backed up.

Eating 3 or 4 pieces of fruit and drinking plenty of water will quickly work to clear constipation that can come on unexpectedly.

Constipation is caused by eating dry foods, and not drinking enough water.

Eating fruits and vegetable everyday such as eggplant, will keep your digestive system healthy, and give you regular and easy bowel movements.

Should I peel eggplant? 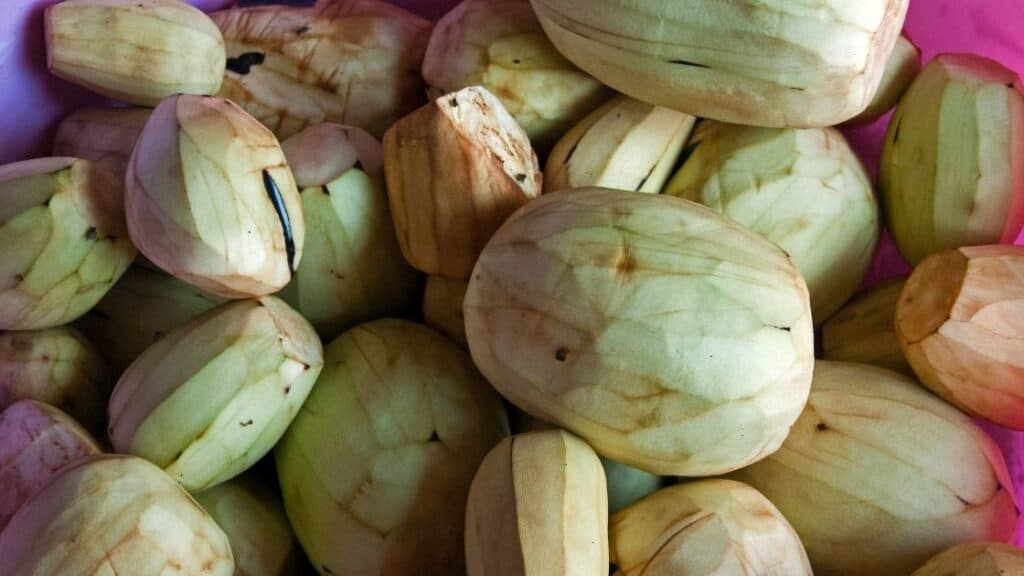 But, should you eat the skin on eggplant, or what’s the best way to prepare eggplant skin?

Certain people prefer eating the skins whereas others don’t.

Therefore, you can choose to peel eggplant or eat it as is.

Baba ganoush is a popular dip made mostly of eggplant.

The skin of the eggplant is peeled when it’s used to make baba ganoush.

Favorite recipes for cooking eggplant are to deep dry them in batter, fry them with oil, herbs, salt, and pepper or slice them and bake them together with other vegetables.

Once they’re cooked you can use them in a kebab, salad, or as a side dish for most other meals.

When eggplant is cooked it can take on a soft consistency similar to melted cheese, or mashed potatoes.

Can you eat eggplant peel? 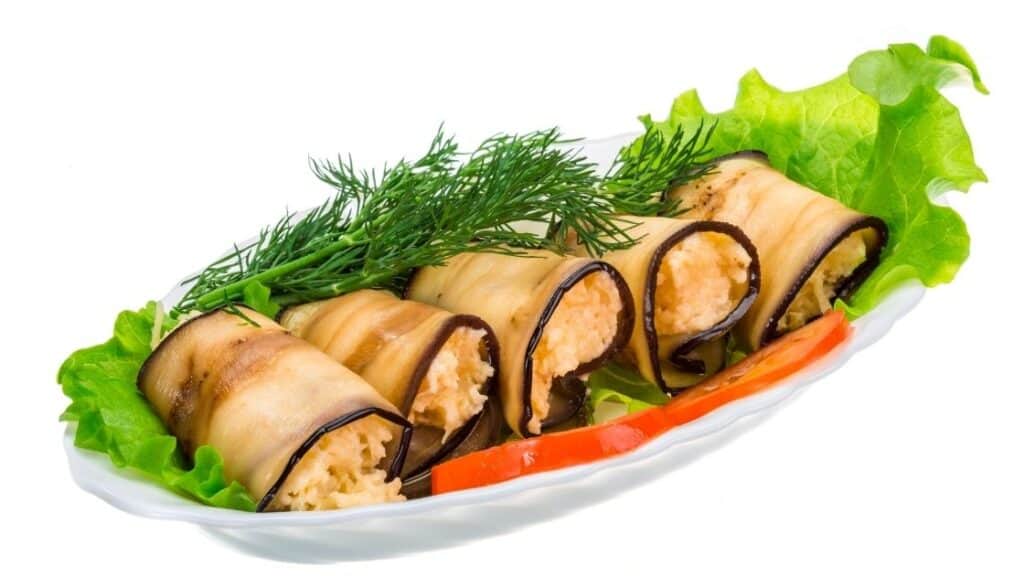 In certain circumstances, you may peel the eggplant and then have it leftover.

So, I was curious whether you can eat eggplant peel?

Generally, eggplant peel can be eaten.

It can be turned into crispy chips by frying them.

Some people also enjoy just eating the skin raw on its own.

Eggplant skin contains a high amount of antioxidants and other beneficial nutrients.

The most common color of eggplant peel is purple.

Interestingly, though, eggplant is thought to have got its name from the white skin variety of eggplant.

When white eggplant is growing on the plant they look almost identical to chicken eggs.

There is also a type of eggplant that grows in South East Asian that has green skin.

Are eggplants easy to grow? 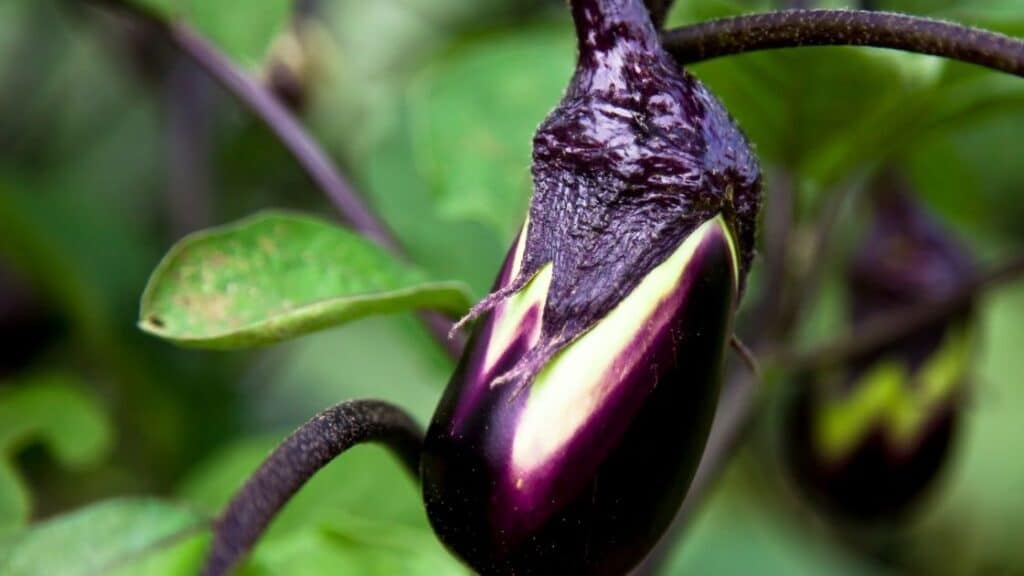 Eggplants are a great vegetable/fruit and each plant produces about 1 week’s worth of eggplant.

But, you may be wondering whether they’re easy to grow and whether they require a lot of maintenance.

Eggplants are easy to grow and grow faster than tomatoes or peppers.

In warmer climates above zone 11, eggplants will survive through winter as temperatures stay above 40 °F (10 °C) and are therefore grown as a perennial.