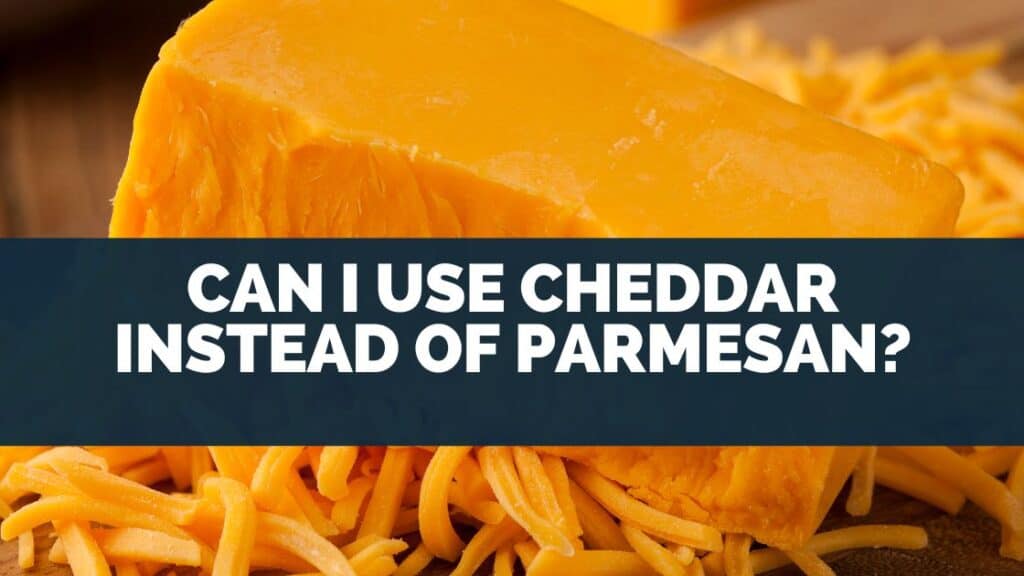 Cheese! Yumm…..so many recipes call for cheese, and nothing tastes better than cheese and wine.

If you are making a dish that requires parmesan but all you have is cheddar, you might wonder, “Can I use cheddar instead of parmesan?”

Even though cheddar cheese does not have the same flavor as parmesan, it can be a delicious substitute in a pinch.

Although cheddar is simple to utilize and melts well, it will give your dish a fresh flavor twist.

It can be used in any dish in the same way that parmesan is, but it is NOT an ideal substitute, and expect a very different result if sprinkled over pasta (and be prepared to offend pasta purists).

The best substitutes for Parmesan cheese will have a similar rich flavor.

This is found in cheeses that have gone through a similar aging process.

In addition to picking a cheese with a comparable flavor, think about the cheese’s texture.

The closest cheese to parmesan in texture will be another hard cheese.

However, some softer cheeses will have a more appealing flavor.

In addition, some cheeses do not melt as well as parmesan.

Whether it’s cheese with a strong nutty taste to grate on top of spaghetti or cheese with a rich, creamy smoothness to melt into the pasta, there’s nothing like cheese!

What is a Good Replacement for Parmesan Cheese? 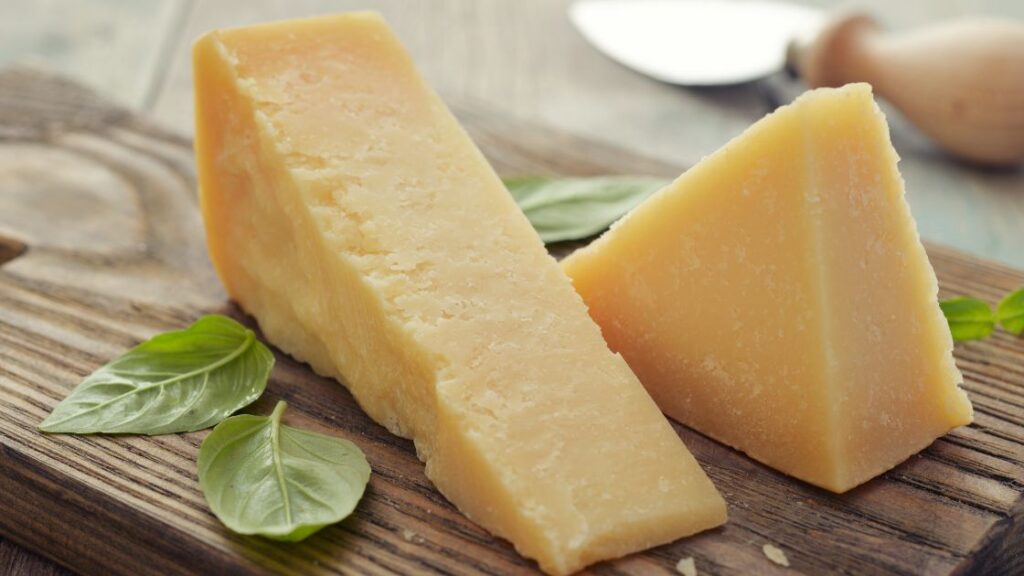 Some of the best replacements for parmesan cheese include asiago, Pecorino Romano, Grada Padano, Romano, and Piave.

You can even use grated mozzarella, Manchego, and sapsago.

Asiago cheese has a rich flavor that is a little bit sweeter and softer than parmesan.

Most recipes that are prepared with parmesan and asiago benefit from their robust flavors when combined.

In addition, asiago’s delicate texture melts into a wonderful gooey cheese that is ideal for incorporating into sauces, risotto pasta.

Most people will discover that a 1:1 substitution of asiago for parmesan works perfectly.

Start with half and add more if you are concerned that the flavor will be too strong.

Due to its consistency, which is similar to parmesan, pecorino romano is an excellent alternative.

Pecorino Romano is manufactured from sheep’s milk as opposed to cow’s milk which is used to make parmesan.

Start with 1/2 the amount your recipe specifies to prevent overwhelming it.

If necessary, add extra to achieve the desired flavor.

Grana Padano has a rich, savory flavor similar to Parmesan since it is matured for 9 months.

You probably don’t always have Grana Padano on hand for last-minute substitutions.

However, this is a terrific option if you want to try a different cheese that tastes like parmesan but has a more nutty flavor.

In any recipe, substitute Grana Padano for parmesan in a 1:1 ratio.

Romano cheese is more robust than parmesan while being a gentler variety of Italian cheese.

Start with half of what the dish calls for and increase as needed, just like with Pecorino Romano.

The milk used to make Piave is collected in the Italian Dolomites. Similar to Grana Padano, you probably don’t have this on hand.

However, if you want a fresh spin on some classic dishes, try subbing out your parmesan with this superior substitute.

You can substitute Piave for parmesan in a 1:1 ratio.

Can I Use Cheddar Instead Of Parmesan In Alfredo? 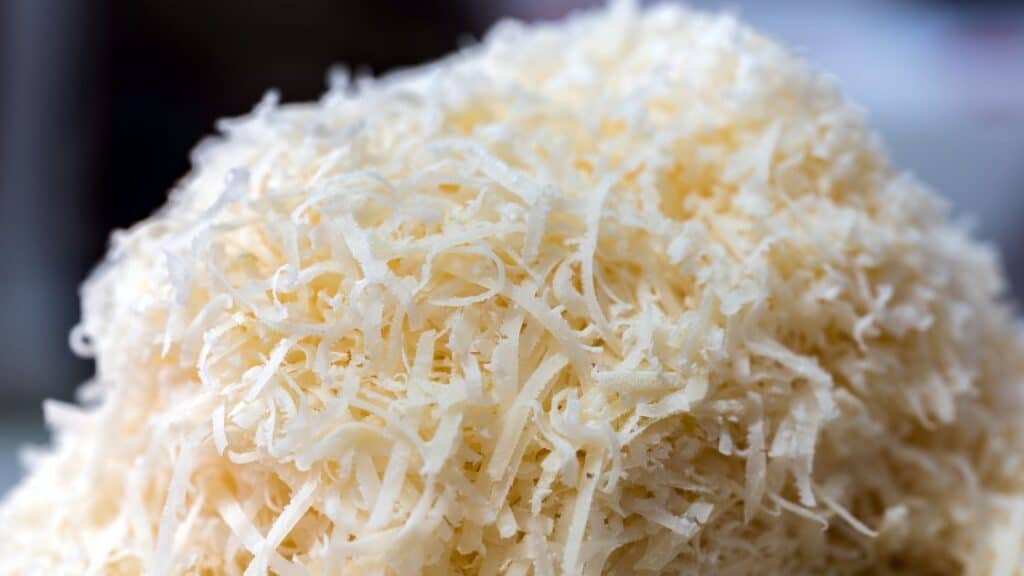 The sharp variety of cheddar delivers a delightful nuttiness and melts smoothly.

Both white and yellow cheddar will work in Alfredo, although the latter will give the dish a yellow tint, making it resemble classic mac and cheese.

In addition, even though some people may substitute mozzarella for parmesan in Alfredo, it’s not the ideal option.

The flavor profile will differ because mozzarella is a semi-soft cheese, and parmesan is a firm cheese.

However, a delicious pesto mozzarella meal is still doable.

Can I Use Cheddar Instead Of Parmesan In Risotto? 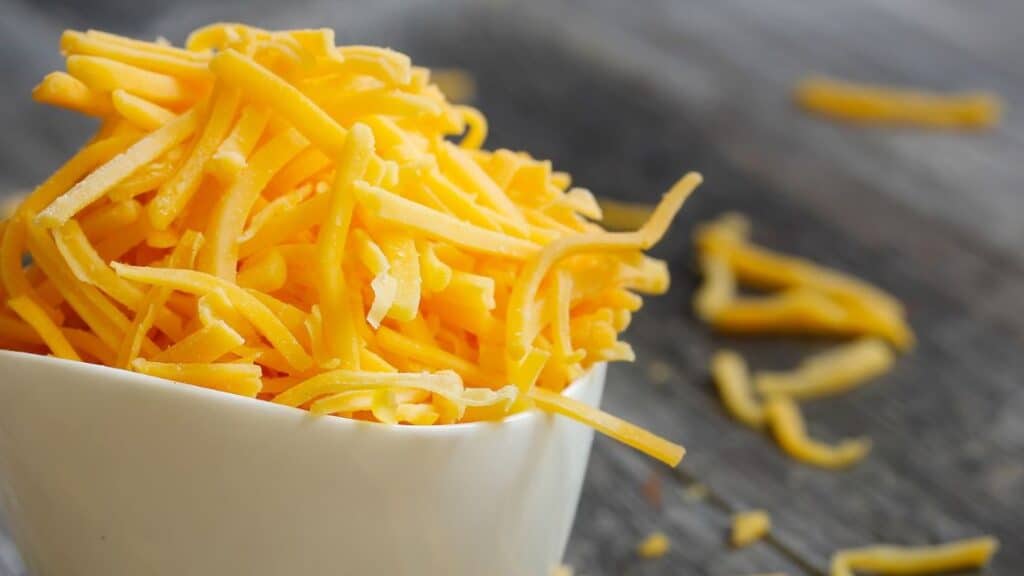 Yes, cheddar may be used in any dish, just like parmesan.

Grate it, add it to a salad, swirl it into risotto, or incorporate it into spaghetti.

For a simple 1:1 swap, use cheddar cheese in place of the parmesan.

However, there are a virtually limitless number of cheeses that go well with the risotto such as Pecorino Romano.

Like the quirky cousin of parmesan, Pecorino Romano is a hard cheese similar to parmesan that may be grated, but because it is manufactured from sheep’s milk rather than cow’s milk, it is sharper, saltier, and overall tangier.

You’ll know the flavor punch that the traditional cacio e Pepe pasta from Rome offers if you’ve ever had it.

In addition, Mascarpone is the solution to make your risotto even creamier and richer.

The spreadable cheese is as luxurious and buttery as they come.

It’s better to combine it with traditional parmesan cheese because it won’t impart the salty flavor that other cheeses will.

Both fresh mozzarella and shredded mozzarella can also be used in risotto.

Just before serving, toss in a large ball of the fresh ingredient that has been cut into cubes.

The cubes will barely melt, giving you a delectable cheese taste, but they will retain some of their shapes, giving you a bit of texture.

What Can I use Instead of Parmesan Cheese in Alfredo Sauce? 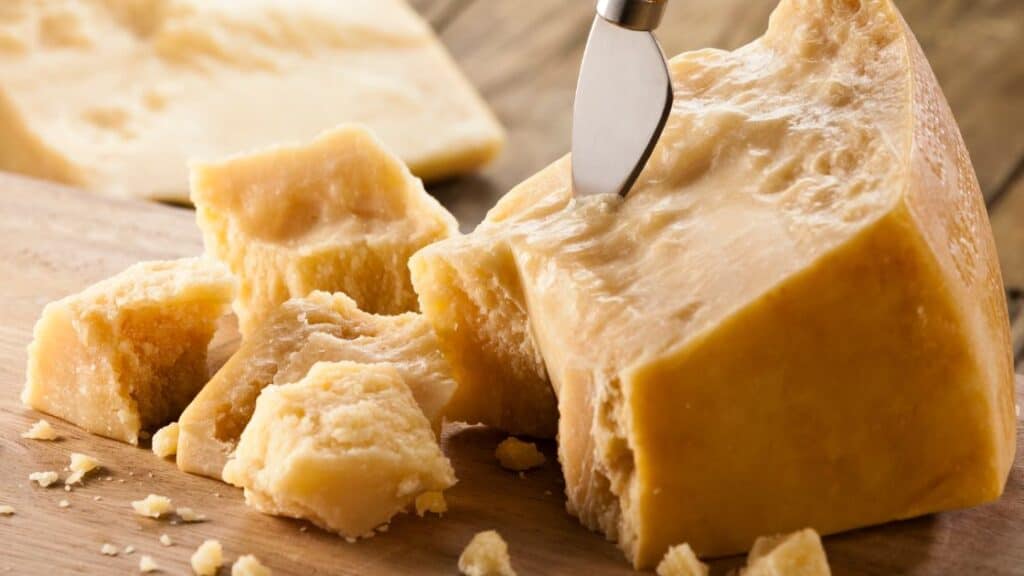 The most popular grated cheese used in Alfredo sauce is parmesan.

On the other hand, hard cheeses like Grana Padano, Pecorino Romano, Parmigiano-Reggiano, and Asiago can be used as a substitute.

Asiago cheese is a fantastic substitute for parmesan since it is sweeter.

Can You Substitute Mozzarella for Parmesan? 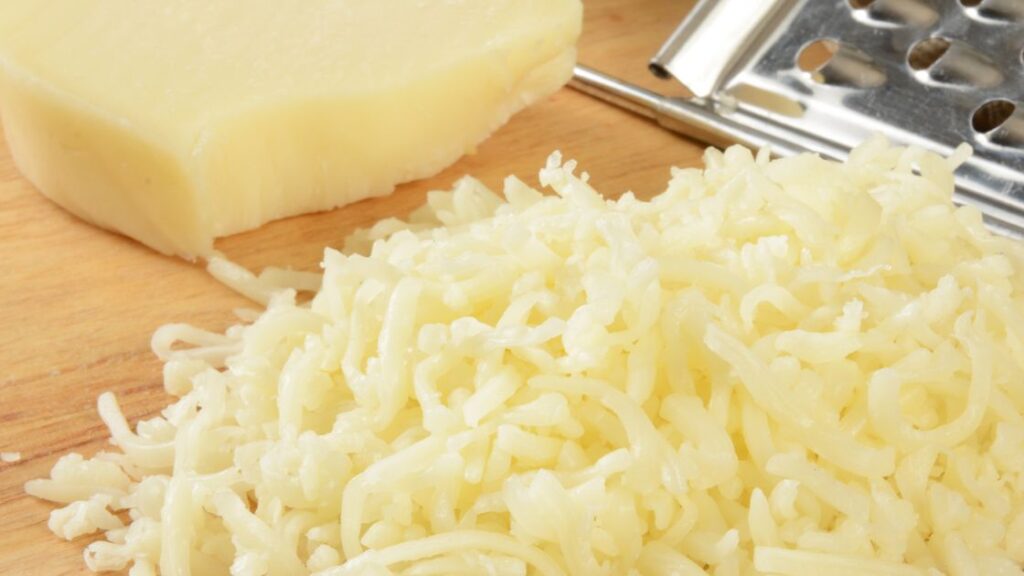 Parmesan cheese powder in the can is gritty and should not be used.

You can use shredded mozzarella cheese instead of freshly grated or shredded parmesan cheese in a 1:1 ratio.

For risottos and spaghetti sauces, mozzarella melts well and offers a base that is rich, creamy, and cheesy.

Start by substituting mozzarella for parmesan in a 1:1 ratio.

Remember that you can substitute mozzarella for parmesan in recipes, but the results won’t be the same.

Anything you want to do is possible, but mozzarella has much less flavor than parmesan and melts more quickly.