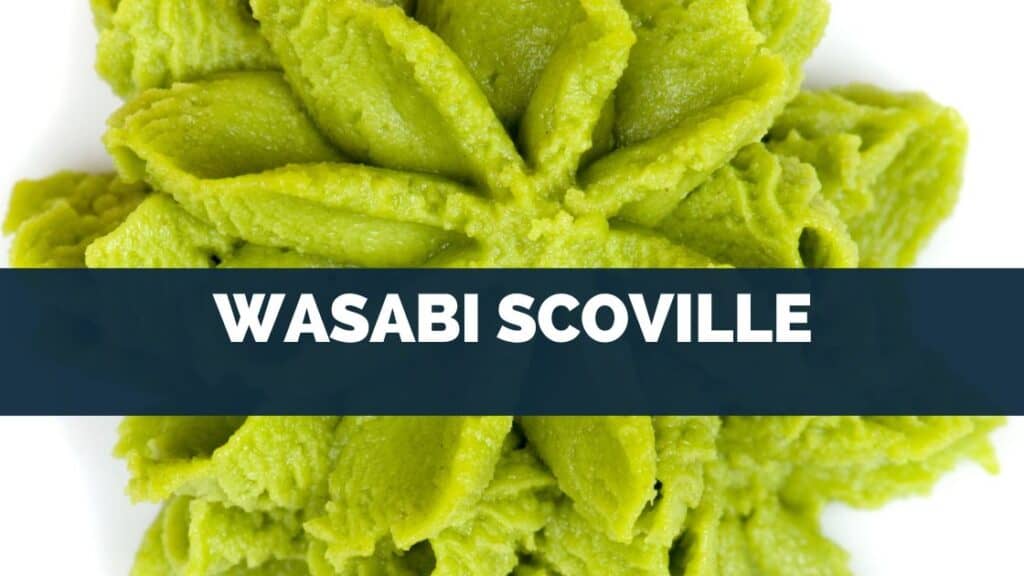 Everyone who has ever eaten Japanese food is familiar with the fiery wasabi that accompanies your delicious sushi plate.

Paired with soy sauce, wasabi is an essential dipping sauce for every Japanese meal.

But what makes wasabi so spicy, and how spicy exactly is it? Is there such a thing as a Wasabi Scoville?

It is too bad that wasabi is considered a root, not a pepper, and cannot be measured by the Scoville Scale.

The chemical that gives peppers the spiciness is called capsaicin, while in wasabi, it is called allyl isothiocyanate.

However, many people have likened the spice level of wasabi to habanero peppers, which measure a fiery 100,000 to 350,000 on the Scoville Scale.

The Scoville scale measures the ‘hotness’ of chili pepper or other capsicum-based spice.

The scale is actually a measure of the concentration of capsaicinoids, which are the group of compounds that give chili peppers their characteristic heat.

The Scoville scale was invented in 1912 by American pharmacist Wilbur Scoville, who developed a method for measuring the capsaicinoid content of different peppers.

His method, now known as the Scoville organoleptic test, involved diluting an extract of the pepper in sugar water and testing it on a panel of tasters.

The more dilutions required to reach the point where the heat was undetectable, the higher the number on the Scoville scale.

Today, there are more sophisticated methods for measuring capsaicinoids, but the Scoville scale is still used as a rough guide to the ‘hotness’ of a pepper.

The hottest pepper in the world is currently the Carolina Reaper, with a rating of a shocking 2.2 million on the Scoville scale.

Go to top
Table Of Contents hide
1 How Many Scoville Units Are In Wasabi?
2 What Pepper Is In Wasabi?

How Many Scoville Units Are In Wasabi? 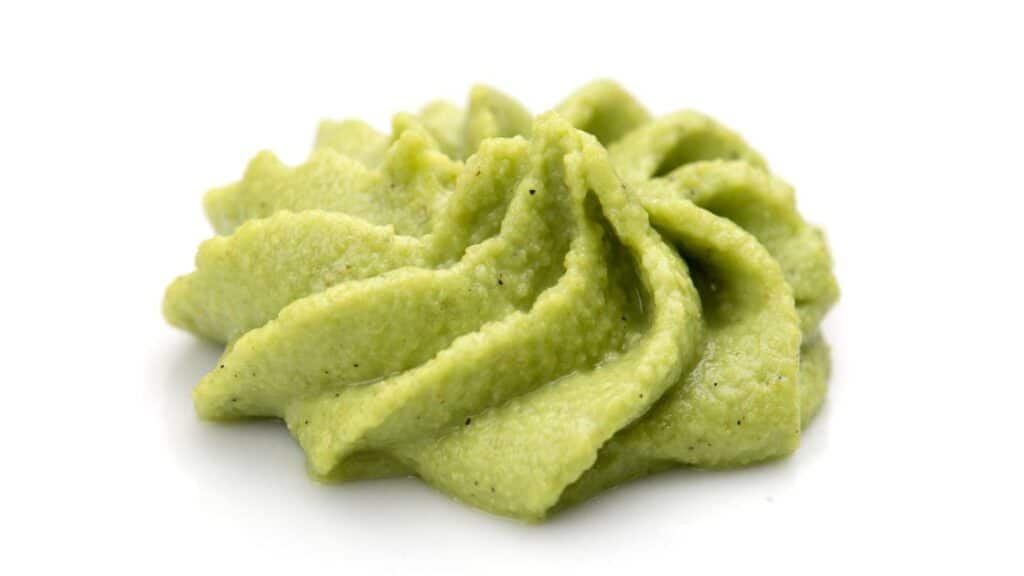 Wasabi is a root, not a pepper, and since the Scoville Scale is specifically for peppers, wasabi has no Scoville score.

However, many people that are familiar with peppers have likened the burning sensation of wasabi to be very similar to habanero peppers, which have an impressive Scoville Score of 100,000 to 350,000.

The hottest pepper in the world is the Carolina Reaper, with a shocking 2.2 million score.

The Scoville scale measures the pungency (spicy heat) of chili peppers or other strong spices.

The Scale is named after its creator, American pharmacist Wilbur Scoville.

His method, devised in 1912, is known as the Scoville organoleptic test.

In Scoville’s time, his method was the most commonly used; however, it has largely been replaced by modern high-performance liquid chromatography (HPLC) because it is more accurate and repeatable.

Nevertheless, the terms “Scoville units” and “Scoville heat units” are still used to describe the results of the organoleptic test in many popular sources.

Pepper spray is around 2 million SHU.

Pure capsaicin (the stuff that makes peppers hot) is around 16 million SHU.

The record holder for hottest pepper is currently the Carolina Reaper at 2.2 million SHU.

The Ghost Pepper was previously the record holder at 1 million SHU.

But don’t worry, you’re not likely to ever encounter a pepper this hot unless you’re looking for it.

Since wasabi is technically a root and not a pepper, it doesn’t have a Scoville score, but most people have considered it about as spicy as a habanero pepper.

Most people are familiar with wasabi as that green paste that comes with sushi, but not many know what it actually is.

Wasabi is a root vegetable in the mustard family, and its sharp flavor is due to compounds called isothiocyanates.

These compounds also give the mustard its characteristic taste, and they have been shown to have antimicrobial properties.

In addition to its culinary uses, wasabi has also been used medicinally for centuries.

It is said to have anti-inflammatory properties and to help treat respiratory infections.

Wasabi is also a good source of vitamins A and C and potassium.

So next time you’re enjoying some sushi, take a moment to appreciate the complex flavor of wasabi – it’s more than just a condiment!

What Pepper Is In Wasabi? 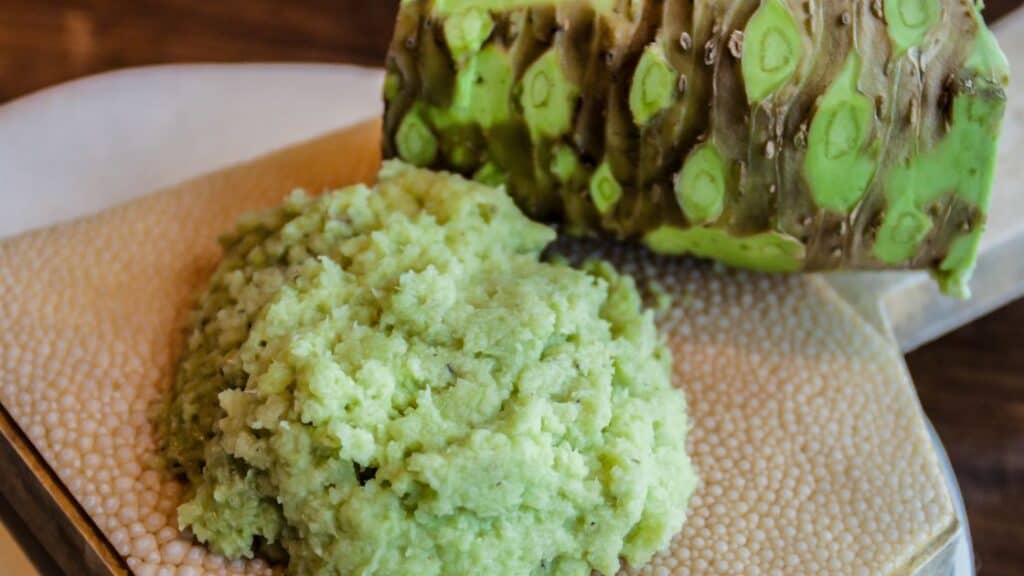 Wasabi is not considered a pepper but a root.

The spiciness in peppers comes from a compound called capsaicin, while the spice from wasabi comes from allyl isothiocyanate.

Real wasabi comes from a plant stem that grows underground, much like a root.

If you love sushi, then you’ve probably tasted wasabi.

This bright green condiment is made from a Japanese plant called wasabi.

Wasabi has a strong flavor that can be described as hot, sharp, and peppery.

It’s often used as a dipping sauce for sushi and sashimi or as a filling for maki rolls.

So why do we love wasabi so much?

These chemicals interact with our nose and throat to produce a burning sensation.

The intensity of the heat can vary depending on the quality of the wasabi and how it’s prepared.

But one thing is for sure – wasabi packs a powerful punch.