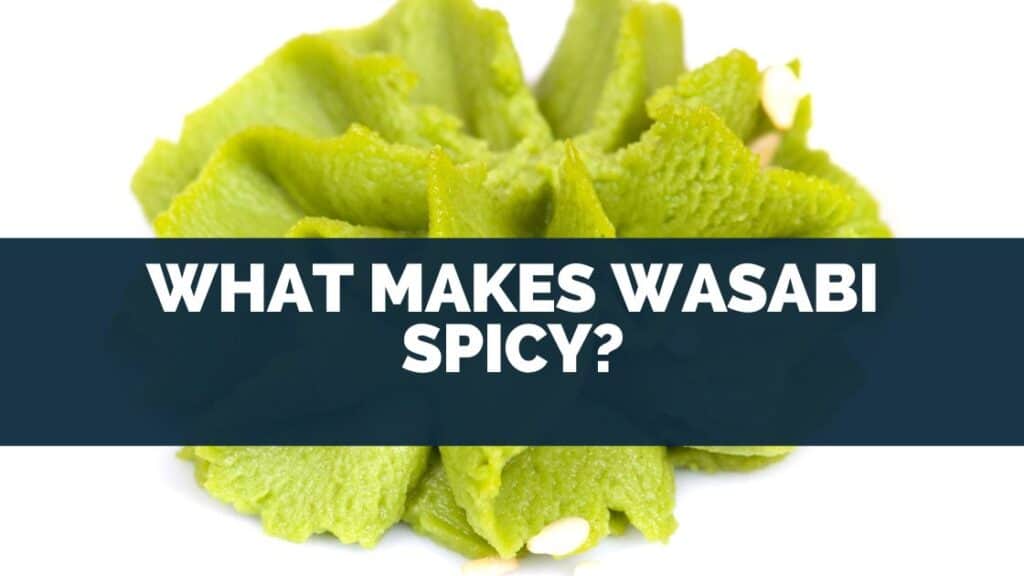 Wasabi is a quintessential part of Japanese cuisine, found in every sushi restaurant.

However, have you ever wondered what makes wasabi spicy? Wasabi is a member of the Brassica family, which also includes mustard, horseradish, and cabbage.

Like these other plants, wasabi contains compounds called isothiocyanates.

These compounds are responsible for the pungent flavors of all three plants.

When the brassica plant is cut or chewed, enzymes in the plant’s cells convert sugars into isothiocyanates.

When these compounds come into contact with mucous membranes, they cause a burning sensation.

The intensity of the spice can vary depending on the number of isothiocyanates present in the plant.

Wasabi generally has a higher concentration of these compounds than mustard or horseradish, which explains why it is often considered the spiciest of the three.

Wasabi is a traditional Japanese condiment that has been used for centuries.

The plant grows in the mountains of Japan, and the root is ground into a paste with a powerful flavor.

Wasabi was originally used as a medicine, and it was not until the 18th century that it became widely used as a food ingredient.

Since then, it has been an essential part of Japanese cuisine and is often served with sushi or sashimi.

Wasabi is also gaining popularity in other parts of the world as people discover its unique flavor and health benefits.

Wabi is said to improve digestion and boost the immune system thanks to its pungent taste.

It is also a potent antibacterial agent, making it an ideal way to preserve food.

With its long history and multiple uses, wasabi is a true culinary treasure.

Go to top
Table Of Contents show
1 What Is Wasabi And Why Is It Spicy?
2 Is Real Wasabi Really Spicy?
3 Where Does The Heat In Wasabi Come From?

What Is Wasabi And Why Is It Spicy? 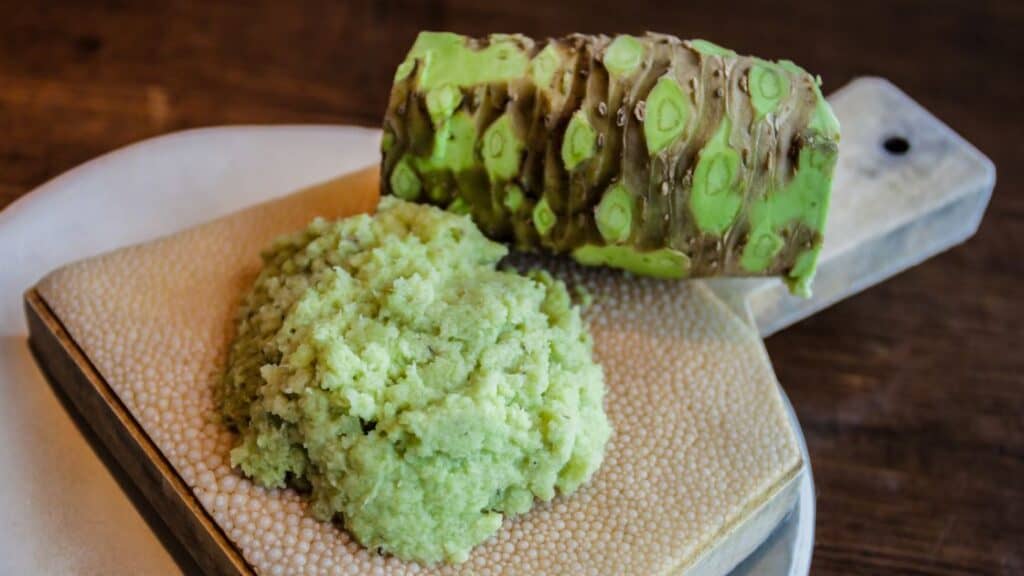 Wasabi is an integral part of Japanese cuisine and is loved worldwide.

But what is wasabi, and why is it spicy? Wasabi is a type of horseradish that is commonly used as a condiment in Japanese cuisine.

Wasabi is traditionally made into a paste by grating the root on a sharkskin grater.

The spiciness of wasabi is caused by compounds known as allyl isothiocyanates.

When these compounds come into contact with the mucous membranes in the nose and mouth, they act as an irritant, causing the sensation of heat.

Allyl isothiocyanates are also present in mustard and other hot peppers, although the exact level of spiciness can vary depending on the particular type of pepper.

In general, however, wasabi is significantly spicier than most other types of peppers, but it is not found on the Scoville Scale.

The Scoville Scale is used to measure the heat of peppers, and wasabi is a root, not a pepper, which means it doesn’t typically fall into this category.

The Scoville scale is a method of measuring the heat of peppers.

It was invented by Wilbur Scoville in 1912 and is still used today to measure the heat of peppers.

The Scoville scale is based on the amount of capsaicin, a compound that makes peppers hot, in a pepper.

The higher the number, the hotter the pepper.

The hottest pepper in the world, the Carolina Reaper, has a Scoville rating of 2,000,000.

Pepper experts and tasters have likened the burn of wasabi to a habanero pepper, which has a Scoville rating of 100,000 to 300,000. 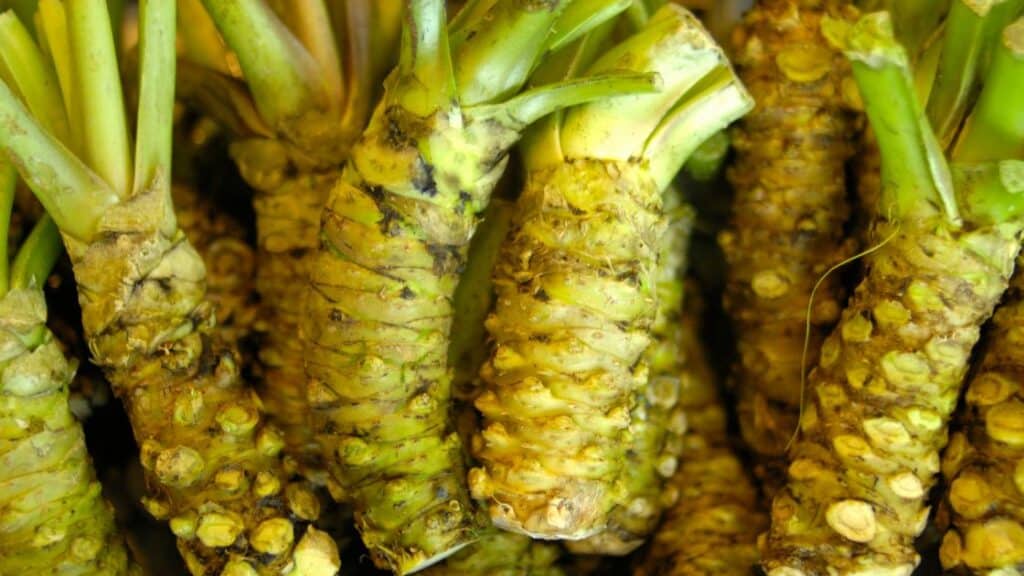 You may not know that the wasabi you’re used to eating is actually not real wasabi.

The vast majority of wasabi served in restaurants is actually a mixture of horseradish, mustard, and food coloring.

But is real wasabi really spicy? You bet it is!

Real wasabi is made from the root of the Wasabia japonica plant, which is native to Japan.

The roots are grated into a paste, which is then used as a condiment.

Unlike the fake stuff, real wasabi has got a real zing to it.

Many have likened it to a habanero pepper, which is one of the hottest peppers according to the Scoville Scale.

The Scoville scale measures the spicy heat of a chili pepper.

The scale is named after Wilbur Scoville, who developed it in 1912.

The Scoville scale is logarithmic, meaning each step up the scale is 10 times spicier than the previous step.

Wasabi doesn’t have a Scoville rating because it is considered a root and not a pepper, but if it is anything like a habanero, it sure is spicy!

Where Does The Heat In Wasabi Come From? 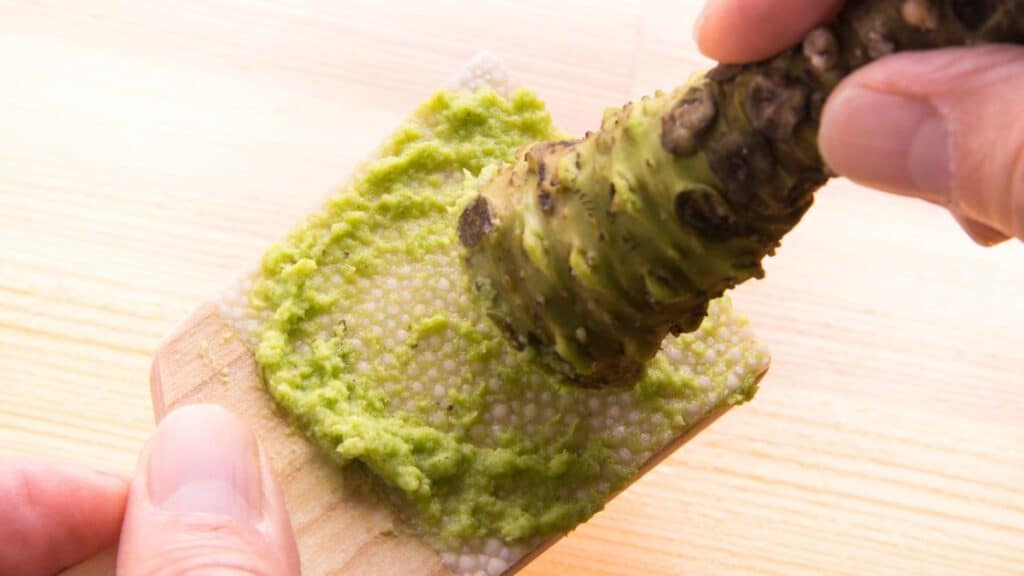 Millions love Japanese food and wasabi but have you ever wondered where the heat in wasabi comes from?

Wasabi is a member of the mustard family, and like other mustard plants, it contains a chemical compound called allyl isothiocyanate.

When the plant is damaged, this compound is released, creating a burning sensation in the nose and throat.

Allyl isothiocyanate is also used as a food additive and has been shown to have antibacterial properties.

In Japan, wasabi is commonly served with sushi, and its strong flavor helps mask fish taste.

The heat of wasabi also clears the sinuses and has been used for centuries as a remedy for colds and allergies.

Spicy foods have long been praised for their ability to clear the sinuses and boost the metabolism.

In addition, wasabi has been shown to contain powerful antioxidants that can help to protect the body against disease.

In addition, wasabi has anti-inflammatory properties that can help to reduce swelling and pain.

Finally, wasabi contains compounds that have been shown to kill harmful bacteria.

As a result, this humble spice can play a big role in maintaining good health.

There are a few things to keep in mind when it comes to eating wasabi.

First, a wasabi root is very spicy, so it’s important to start with a small amount.

Second, wasabi is best eaten with sushi or sashimi, as the flavors complement each other nicely.

Finally, wasabi should be eaten with chopsticks, allowing for more precise control over how much is eaten.

For many people, wasabi is an essential part of the sushi experience.

However, what most people don’t realize is that the wasabi served in most sushi restaurants is not actually real wasabi.

In fact, it’s a mixture of horseradish, mustard, and food coloring that only vaguely resembles the real thing.

True wasabi is made from the root of the wasabi japonica plant and has a more complex flavor than its imitation counterpart.