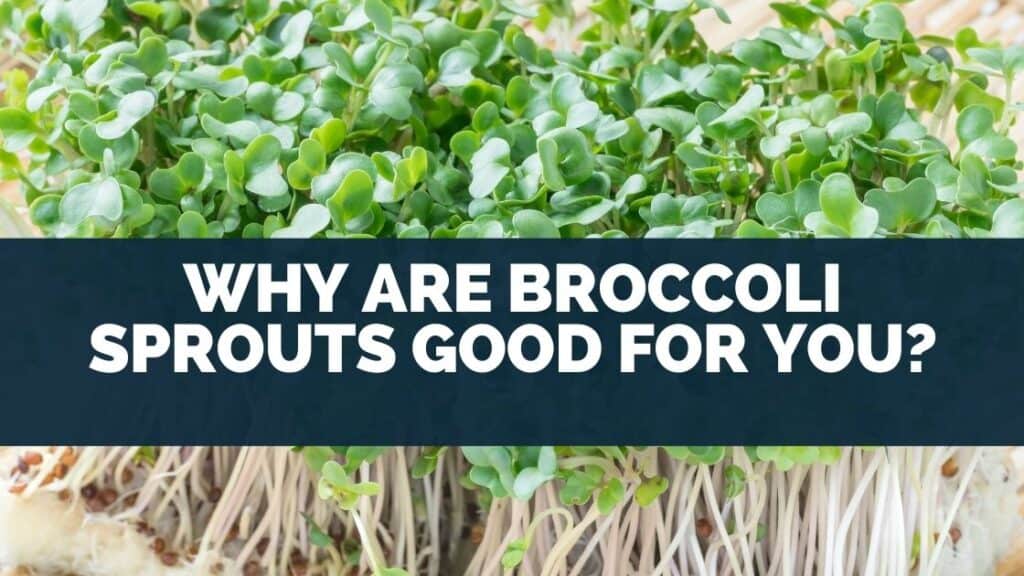 Broccoli sprouts are young broccoli plants that grow from broccoli seeds and are a mere three to five days old.

They have a radish-like flavor to some but are tasteless to others!

They go well in salads, dressings, sandwiches, and wraps.

They are known as nutritional powerhouses and are becoming increasingly popular as a health food with several potent benefits.

They are high in fiber, protein, vitamins, minerals, and phytochemicals.

Phytochemicals are biologically active plant compounds that are high in antioxidants and have other beneficial qualities.

Broccoli sprouts belong to the cruciferous family, a family of vegetables that has been proven to have a low mortality risk in multiple studies.

Sulforaphane is a critical nutrient that leads to this action.

It is recognised to be a powerful anti-cancer molecule, and it may also help delay the aging process by lowering inflammation in our bodies.

Broccoli sprouts have far more sulforaphane than other cruciferous veggies.

As a result, they may give more health advantages than other cruciferous vegetables.

Some of the health benefits that broccoli sprouts may have are :

Coenzyme Q10 is a molecule that helps produce energy in the cells, helps lower blood pressure and has been associated with health in a number of chronic diseases.

A systematic review of these trials reveals that diabetes people benefit from broccoli sprout consumption.

They found that there was less insulin resistance, more antioxidant activity, and better cardiovascular indicators.

Sulforaphane is a phytochemical that has piqued the interest of cancer researchers since it is a potent natural compound that may both prevent and decrease cancer progression.

It has the ability to intervene in the cancer growth process at the genetic level, reverting aberrant mutations in the DNA back to normal.

Maternal and early postnatal consumption of SFN and broccoli sprouts was found to be effective in avoiding breast cancer later in life by modifying tumor-related gene expression in animal research.

Several other in-vitro and animal investigations have demonstrated that sulforaphane is effective against cancer.

Because broccoli sprouts contain 20–100 times more sulforaphane than broccoli, they may be more effective in cancer prevention and therapy.

4. May protect against brain diseases

They accomplish this by activating the Nrf2 signaling pathway, which is normally inactive in disease states.

In animal models, it has also been shown to improve cognitive impairments in Alzheimer’s disease patients.

It slows the death and loss of neuronal cells, which is a prevalent occurrence in Alzheimer’s disease.

Another intriguing result is that it may help with autistic symptoms.

The importance of gut health is grabbing attention these days as it was only a decade ago discovered how the gut environment and its bacteria play a significant role in our health outcomes.

Sulforaphane is also a potent anti-bacterial that can alter the gut microbiota positively.

Can I Eat Broccoli Sprouts Everyday?

Yes, eating broccoli sprouts every day is completely safe and healthful as long as the consumption is kept to optimal levels.

The upper limit of broccoli sprouts has not yet been defined scientifically, and it is uncertain how much consumption of these sprouts may raise the risk of any negative effects.

Nonetheless, research on other brassica crops, such as broccoli, Chinese cabbage, and bok choy, indicates that standard serving quantities are unlikely to be harmful.

About 2-4 ounces (~ 50-100g) of broccoli sprouts every day is more than enough to reap the beneficial good of the sprouts.

One thing to keep in mind while sprouting broccoli seeds is that they are germinated in water for 3-5 days, which is a frequent breeding habitat for E. coli, Salmonella, and Listeria, all of which cause food poisoning.

Sprouts, according to the FDA, may carry more food-borne viruses than other foods due to the humid environment in which they develop, as well as the temperature.

As a result, it is recommended that sprouts be well washed before consumption and that raw sprouts be avoided by children, pregnant women, and those with compromised immune systems.

People who are predisposed to hypothyroidism should exercise caution and consult their doctor before taking broccoli sprouts, which contain sulforaphane, an isothiocyanate molecule.

Isothiocyanates are thought to be goitrogens or compounds that can interfere with thyroid gland action by affecting iodine absorption.

Are Broccoli Sprouts Healthier Than Broccoli? 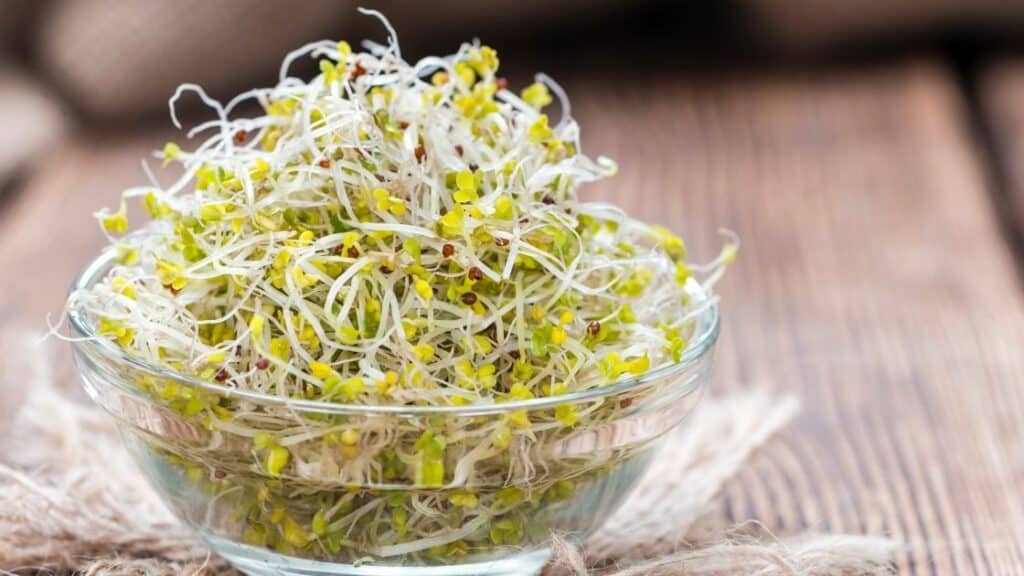 Although broccoli sprouts may not have as much vitamin C and vitamin K as developed broccoli, they do contain 50-100 times more sulforaphane.

This indicates that 30 grams of broccoli sprouts have the same amount of antioxidants as consuming a kilo of broccoli florets.

As a result, broccoli sprout extracts are frequently employed in natural medicine for the treatment and prevention of a variety of illnesses.

Here is a comparison of nutrients from broccoli sprouts and raw broccoli.

It should be noted that the nutritional profile shown here is for raw broccoli, and most people boil broccoli before eating it, which alters its nutrient content.

Any sort of cooking results in the loss of some nutrients, including sulforaphane, thus further reducing when consumed in the form of broccoli florets.

People who are unable to consume raw broccoli sprouts but can consume broccoli may get the most out of the vegetable by cooking it quickly or by taking broccoli supplements.

Are Broccoli Sprouts A Superfood? 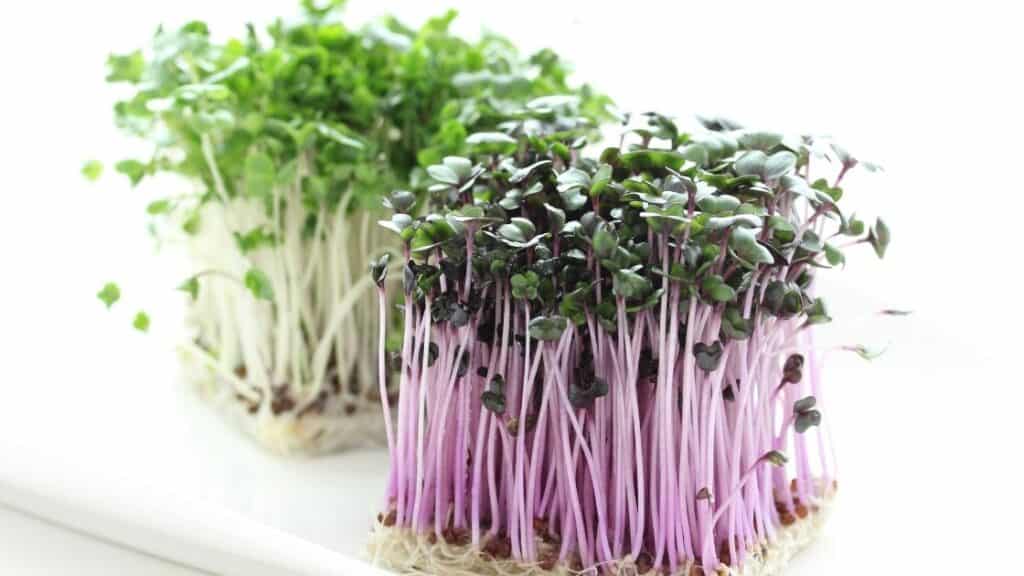 Broccoli sprouts can be considered as a superfood due to the high quantities of nutrients found in them, which have several health advantages and the ability to prevent and treat illnesses beyond their nutritional value.

They include anti-cancer, anti-bacterial, and anti-inflammatory phytocompounds that help lower the risk of chronic illnesses such as cancer, heart disease, gastrointestinal issues, and type 2 diabetes.

In fact, it may provide a breakthrough in the treatment of brain illnesses such as Alzheimer’s, Parkinson’s, Huntington’s, and Autism.

All of this is due to the high concentration of powerful sulforaphane, which has the potential to cause alterations at the DNA level, interact with signaling pathways, and repair things that have gone wrong in our body.