I’ve been learning about the nutritional qualities of different fruits and vegetables and started learning about beans/legumes because many are typically much higher in protein than other vegetables.

And I was curious about whether kidney beans, in particular, are considered a legume.

Kidney beans are classified as legumes.

The definition of legume is a plant that is grown so that the seeds can be harvested and consumed.

A legume when dried is called a pulse.

Kidney beans together with other common seeds such as lentils and pinto beans are considered legumes.

Kidney beans have a deep maroon color and taste quite good.

Especially, when you combine it in recipes such as soups, bean salads, and chillis.

Go to top
Table Of Contents hide
1 Benefits of Eating Kidney Beans
2 Can I Eat Kidney Beans Daily?
2.1 Kidney beans and protein
3 Can You Eat Too Many Red Beans?
4 Is It Okay To Eat Red Beans Everyday?
5 Which is better red or white kidney beans? 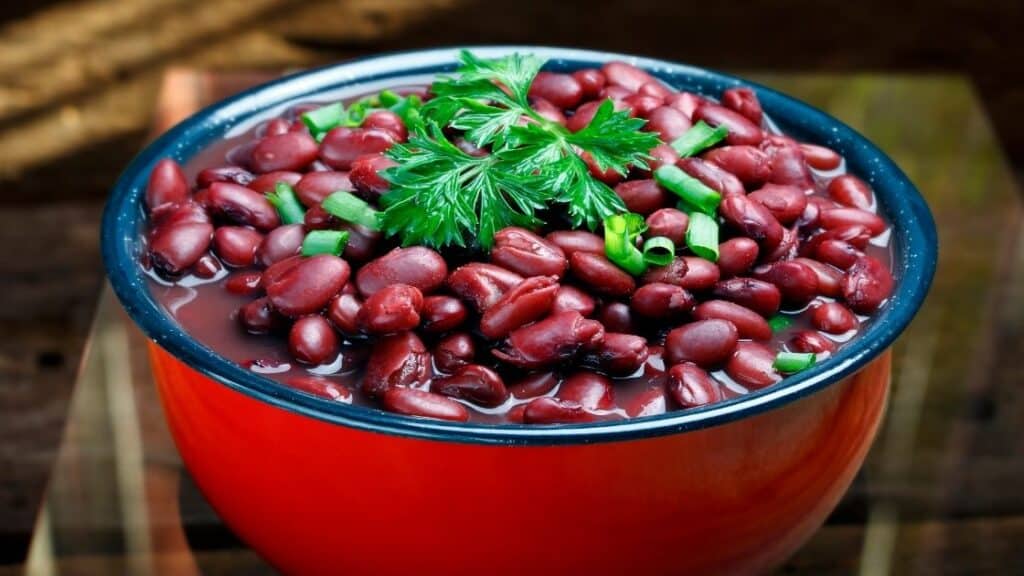 Fruits and vegetables are known to be very healthy for you, so I wanted to know about the unique benefits of eating kidney beans.

Based on the nutritional qualities of kidneys beans here are the benefits of eating kidney beans:

As well as, containing a good amount of calories and protein.

So, eating kidney beans as part of a healthy diet will help your digestion, and are a good source of nutrients that maintain your body in good health.

Kidney beans have about average calories, and protein when compared to other legumes such as soybeans (soya beans), and peas.

Compared to other foods such as fruits, kidney beans are much higher in protein.

Therefore, if you hardly eat meat and fish, or have made the decision to go vegetarian or vegan, then kidney beans are a great way to get the protein you need.

But, there are other beans that contain even higher amounts of protein.

Here’s a table is taken from an article I wrote about how healthy legumes are that shows how the nutrient qualities are different between the various kinds of legumes that you commonly find in stores:

As you can see there is quite a significant difference in the number of nutrients that the different legumes have.

And kidney beans fall somewhere in the middle.

Can I Eat Kidney Beans Daily? 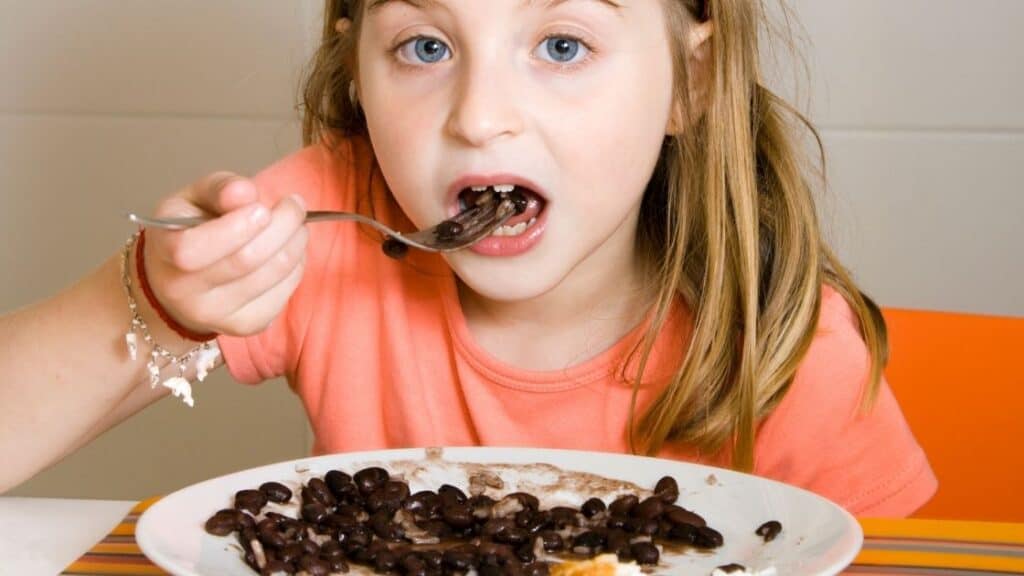 Kidney beans are quite delicious, and they are also quite easy to find in the canned form which makes them really convenient to eat.

But, is it OK to eat kidney beans daily?

The main concern is eating too many kidney beans and not enough other foods.

This can cause you to be deficient in some nutrients, and having more than enough of others.

But, provided you combine kidney beans as part of a balanced diet it’s perfectly fine to eat kidney beans everyday.

As an example, vitamin C is known to be very good for your overall health.

Therefore, you would need to eat about 20 cups of kidney beans to get the vitamin C you need in a day which pretty much everyone would find impossible.

To get the full picture you would need to look at various nutrients that you need to consume in a day, such as fiber, protein, and calories.

And then use a spreadsheet to work out how many of each you’re getting from the foods you eat.

Then you can make adjustments to the amounts of kinds of foods you eat to get the optimum levels.

Generally, beans are great for reaching your calories, protein, and fiber needs. As well as, other lesser-known nutrients such as folate, and thiamine.

Beans are quite unique in the vegetable and fruit world because they contain higher than normal levels of protein, especially soybeans.

A common issue with people who are trying to put on muscle is that they need to consume additional sources of protein such as protein shakes, and the like.

However, the ingredients in protein shakes have been put into question.

And some people are of the opinion that it’s very much buyer beware when buying protein shakes.

Processed foods – those that are cooked, dried, shredded, or ground into a powder – have been shown to have fewer nutrients than the original food.

And so getting protein from natural and only lightly processed sources such as from kidney beans means you’ll get more nutrients, and in my opinion is better for you overall.

But, all things considered, soybeans or black beans have more protein than kidney beans, and so can be a better option as a protein source.

Can You Eat Too Many Red Beans? 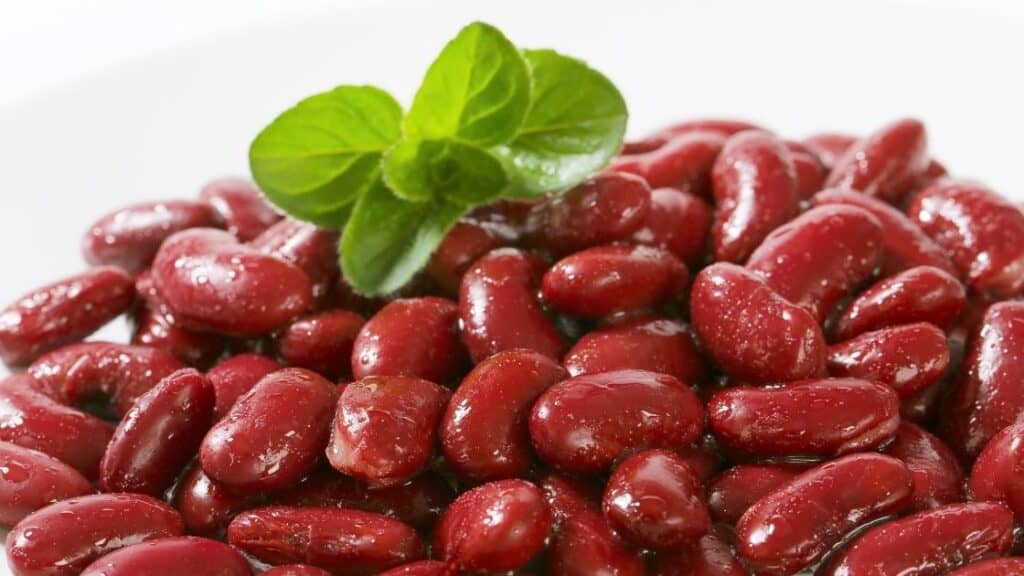 Certain foods and drinks should be consumed in moderation.

For example, you should only eat a small number of sugary foods. But, is the same true for red beans (kidney beans)?

It is possible to eat too many red beans.

However, it’s extremely unlikely because the amount you would need to consume to become an issue is far more than what a typical person could eat.

A person would likely vomit if they were to attempt to consume too many red beans before it could cause an issue.

As you may know, the human body is quite remarkable.

And you’ll get signals that something is not right.

For example, if you don’t consume enough water, or fruits and vegetables you will get constipation.

And if you eat too much of one food you can get diarrhea.

When you try to eat an amount of red beans that are unhealthy you won’t physically be able to eat more.

Beans in general are also world-renowned for causing gas.

Eating anything over about a cup or so of beans a day will cause you to pass A LOT of gas.

This becomes a bit impractical especially if you spend time in meetings, or with friends.

Is It Okay To Eat Red Beans Everyday? 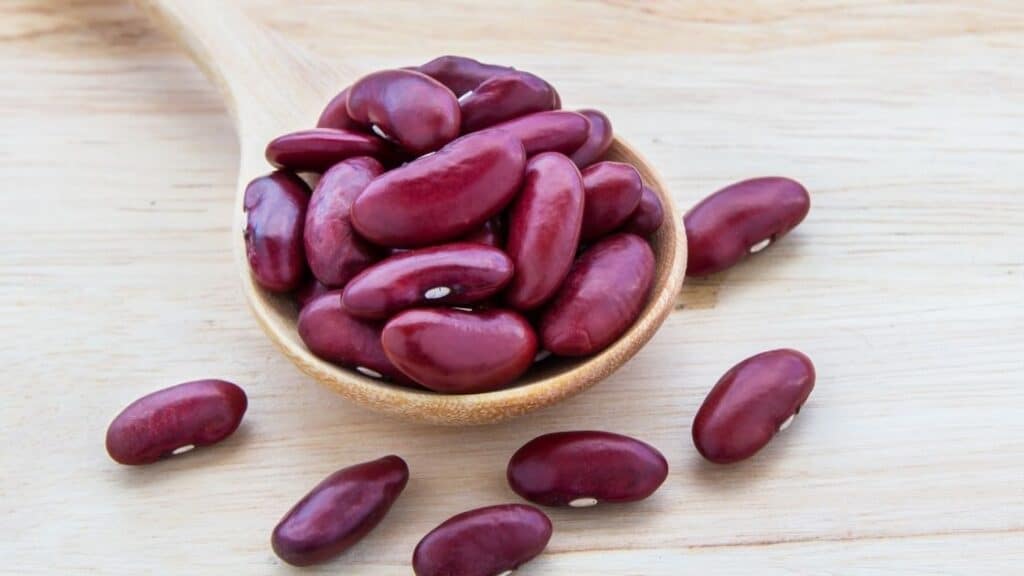 Red beans are versatile so it’s possible to eat them in a bunch of different dishes, and you may find yourself eating them everyday.

But, is it OK to eat red beans everyday?

The reason is that at that amount you will be consuming almost 50% of your calories from red beans.

Which doesn’t leave much room for nutrients from other foods.

As a result, it’s very possible you won’t get other nutrients you need such as Vitamin C.

It can also mean you need to sacrifice other foods that you may like to eat.

The calorie requirements for a male and female are typically 2,000 and 2,500 respectively.

Half a cup is equal to about 100 calories.

So, you’re limited to about 10 cups of beans per day.

Anything over that, and you’ll be consuming too many calories and you’ll put on excess body fat.

But, most people won’t desire to eat more than about 1 to 2 cups of beans per day as you get a bit sick of the taste.

So, overall you can pretty much eat as many red beans you want in a day, and you can consume them everyday.

And if you’re concerned you’re eating excessive amounts of red beans then limit it to 2 to 3 cups per day.

Which is better red or white kidney beans? 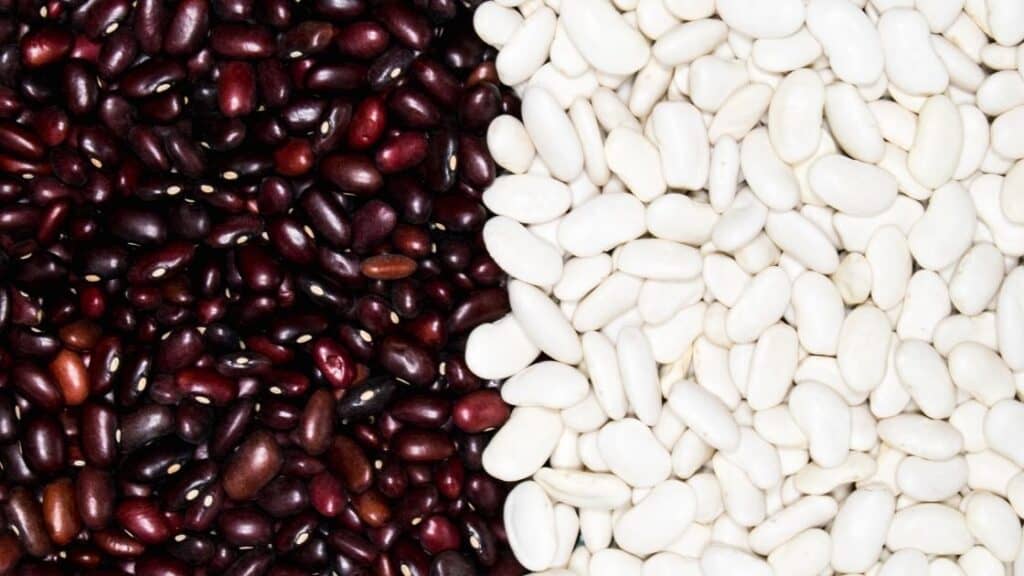 There are both white, red, and speckled kidney beans.

The taste of white kidney beans (also called cannellini beans) is different from that of red kidney beans.

However, that is a matter of personal preference and differs from person to person.

Here’s a table that shows a side by side breakdown of the nutrients found in red and white kidney beans:

From the table, you can see that white kidney beans have slightly more protein and calories.

The other nutrients such as thiamine and folate differ quite a bit.

As a whole, neither is significantly better than the other from a nutrition perspective.

And so the main consideration is which one you like the taste of more.