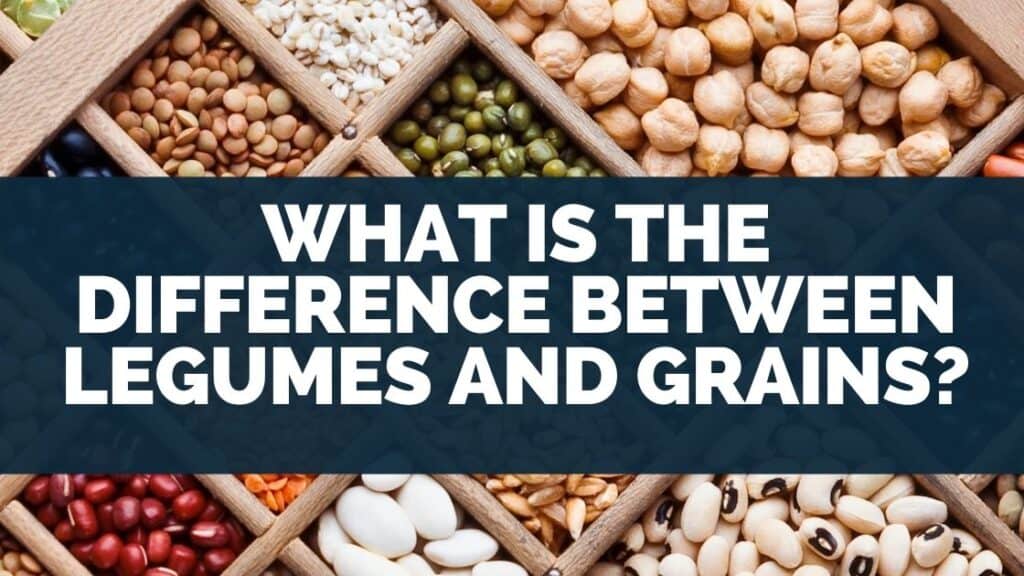 I’ve been researching different diet options, and in many legumes/beans and grains are often included and was curious about the difference between them, and what nutritional values they carried.

I looked at the scientific classification of each and here’s what I wanted to share with you.

A legume is a type of grain. Technically a legume that is a grain is a pulse.

A pulse is a dried legume. There are two categories of grains grown for human and animal consumption which are legumes and cereals.

Legumes include beans, as well as, lentils, and peanuts.

Legume isn’t really a word you use much in everyday conversation, so there are some interesting questions that you’re probably wondering such as are legumes better than grains, are legumes and grains bad for you, and do grains and legumes cause inflammation.

So, below I’ll explain the answers to all these questions and more.

How are legumes and grains different? 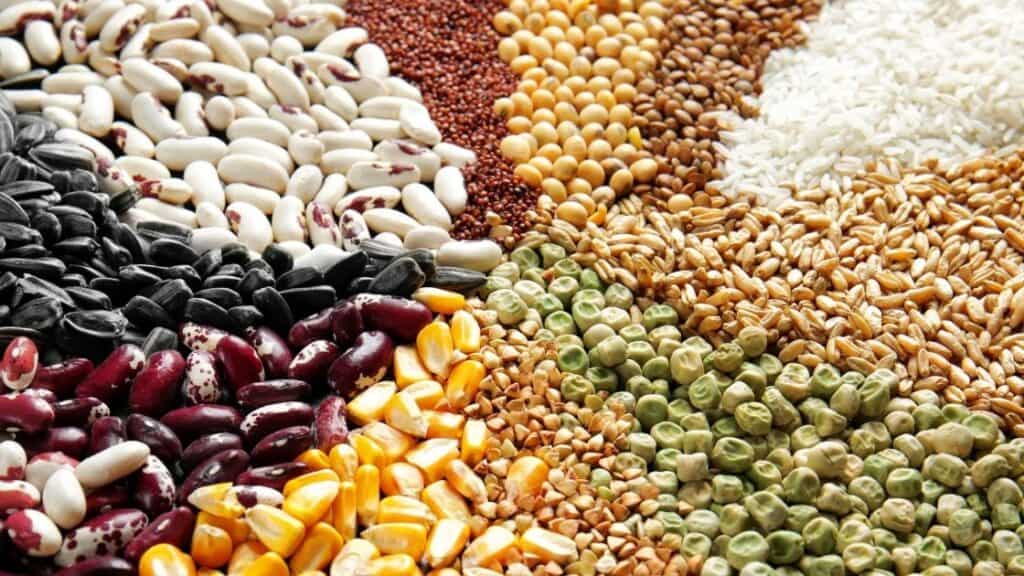 The main difference between legumes and grains is that:

It’s a bit tricky because grains include both legumes and grasses.

But, the most common grains are grasses.

A grain according to the encyclopedia is the seed of a grass.  And they make up a large percentage of most people’s diet.

The primary grasses that are grown for their seeds are wheat, rice, and corn.

Similarities between grains and legumes

But, because of the similarities between dried legumes like lentils, and beans, and dried corn, and rice, they are typically thought of in the same category and are referred to collectively as grains.

When you look at the exact definition though wheat and rice are technically in the grass family.

Whereas, corn is a legume.

And as you may know, corn grows like oversized grass with a huge seed pod. So, the similarities are quite easy to see between grasses and legumes.

The seeds of legumes are what are harvested as they contain high amounts of nutrients and have a good taste.

However, legumes tend to grow in pods, whereas, with grasses, the seeds are exposed to the air, birds, and insects.

Are Legumes Better Than Grains? 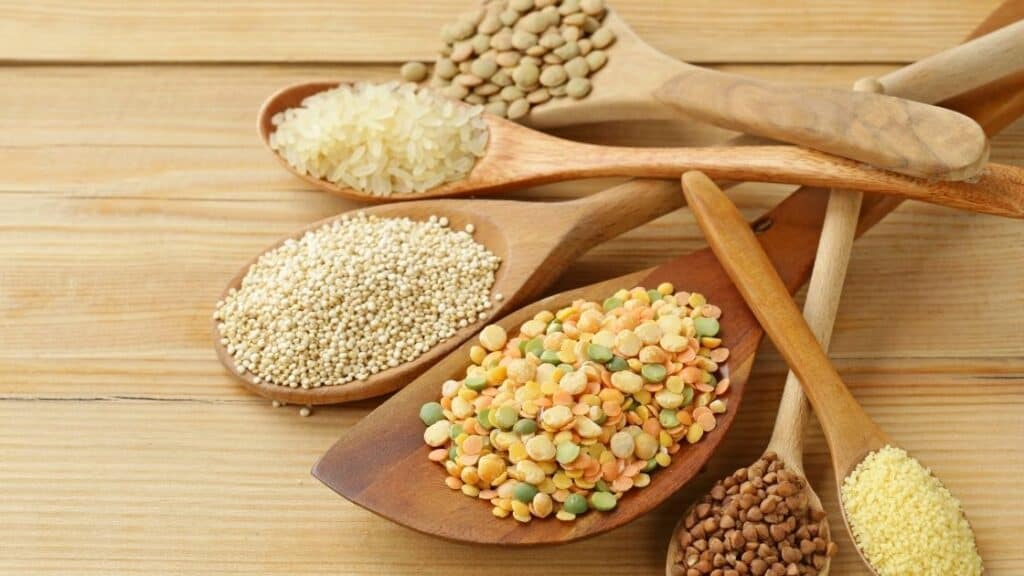 Legumes are thought to be a type of grain, and various foods are more nutritious than others.

So, I wanted to know whether legumes are better than grains.  Here’s what I found.

Legumes tend to have more nutrients than the most common grains.

The most common grains are rice, wheat, and corn.

If you compare rice to kidney beans, which are a common legume, the kidneys have much higher nutrients.

But, a legume is commonly called a grain.

Here’s a tablet that shows a side by side comparison between rice and kidney beans:

It shows that across the board kidney beans have much more nutrients than rice.

However, rice still has a healthy amount of nutrients and is beneficial to eat.

Most grains and legumes are highly prized and are grown extensively because they are easy to grow, and when dried they can last for around 2 years.

They also are high in beneficial nutrients. A grain technically only refers to grasses that are grown to be used as food.

However, legumes are very similar in appearance and are grown and harvested in virtually the exact same way, so most people call them grains as well.

But, overall legumes tend to have more nutrients than grasses (grains).

Do Grains and Legumes Cause Inflammation? 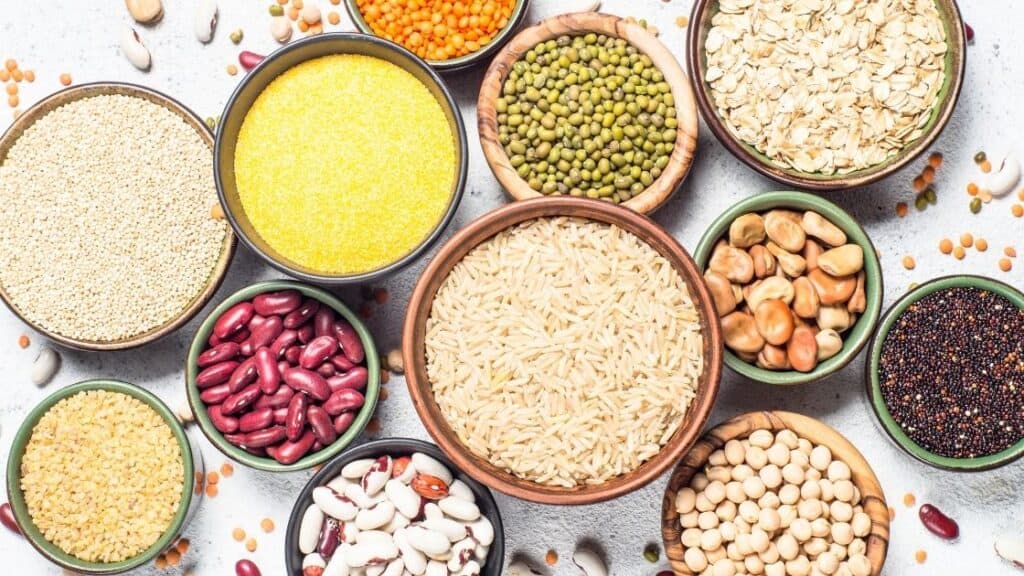 Certain foods can irritate your digestive system, or cause you to feel lethargic, or give you achy joints.

So, I was curious whether grains and legumes are anti-inflammatory or do they cause inflammation.

As a general rule, grains and legumes do not cause inflammation.

However, if you have celiac disease or are allergic/intolerant to gluten then grains will cause inflammation.

Refined grains such as bread and pastries made with white flour cause inflammation.

But, legumes are a natural anti-inflammatory.

Certain pasta and cereals are made from heavily processed grains that cause inflammation.

So, the best grains to eat are whole grains.  Raw whole grains have the most nutrients but aren’t available in stores.

Legumes are high in fiber, and other beneficial nutrients that act as a natural anti-inflammatory.

Legumes include beans such as black beans, kidney beans, and lentils as well as peas and peanuts.

Eating a combination of legumes and grains isn’t known to increase inflammation more than eating legumes or grains on their own.

Why Are Legumes and Grains Bad for You? 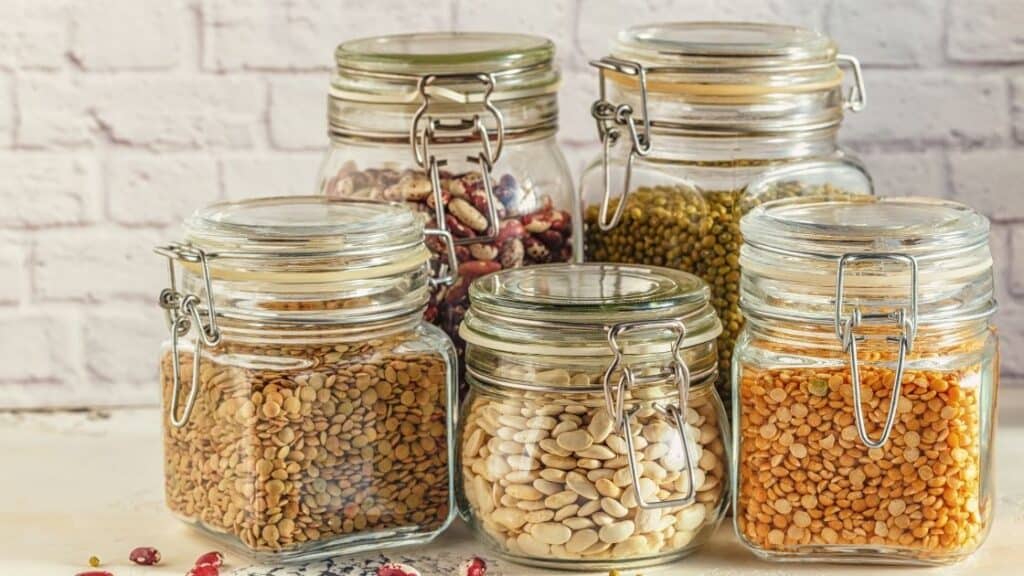 Being at optimum health is achieved by a balance between diet, rest, and exercise.

And certain foods are better to eat than others.

So, I was interested specifically in whether legumes and grains are bad for you.

Legumes and grains are not bad for you. They contain many beneficial nutrients.

And if you eat a small amount raw they can cause you to vomit or get diarrhea.

However, other legumes like peas can be eaten raw.

Refined grains, however, can cause inflammation and bloat. As the food is processed it removes a lot of the nutrients.

For that reason, whole wheat flour is preferred. Certain people are allergic to gluten and can’t eat grains at all.

Legumes on the other hand are very good for you, and can be lumped in the same category as vegetables.

Vegetables and fruits are a good source of fiber which is generally lacking from grains.

1 piece of fruit, or a side dish of vegetables would equal one serving each.

Are Grains Bad for Inflammation? 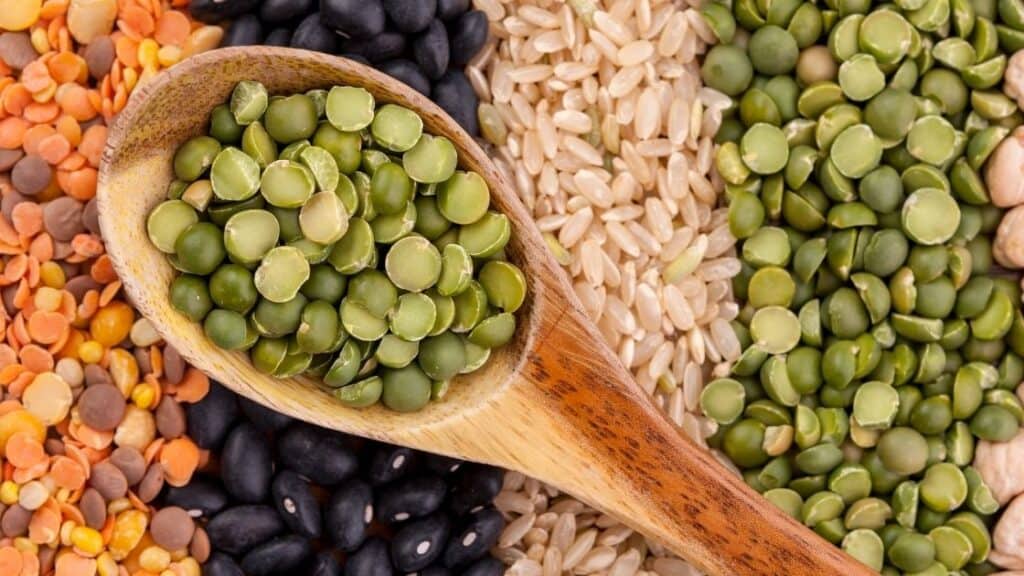 Gluten-free has become more and more popular as people have found that it makes them feel better.

However, some people find that eating grains are perfectly fine.

So, I looked into whether grains cause inflammation.

As a general rule, whole grains do not cause inflammation.

However, refined grains such as white flour, and rice flour are known to cause inflammation.

Grains are also high in gluten and people who have gluten intolerance, or celiac disease will get inflammation from eating grains.

Porridge is a common breakfast food that is made by flattening oats, which are the seeds of the oat plant.

Whole grain… grains are a good alternative to refined grains such as cornflakes and baked goods made from white flour.

Is oatmeal a legume? 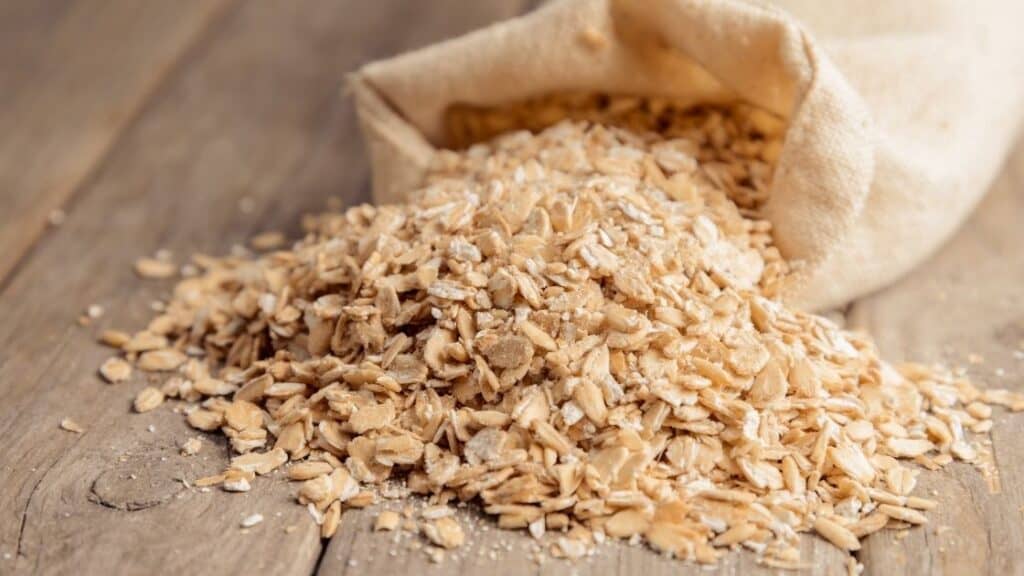 Oatmeal is a staple breakfast in many parts of the world, and rolled oats are well known for their ability to last for a very long time.

But, is oatmeal a legume, how is it classified?

Oatmeal is not a legume. Oatmeal is another name for rolled oats.

Rolled oats are made by flattening oats, and oats are the seed of the oat plant which is grass.

Most grasses are considered grains such as wheat, and barley. But, oats are not a legume.

Legumes and grasses are slightly different in the way that they grow.

Grasses produce seeds from the main stem.  Whereas, legumes house their seeds in pods.

Both are grown to be dried and stored for around the same amount of time.

Therefore, most people think of them as being very similar.

However, owing to the differences in how they grow they are categorized differently.

They also have different nutritional qualities.

Legumes tend to be much higher in protein, fiber, and calories than oats, and other grasses.

What are legumes and whole grains? 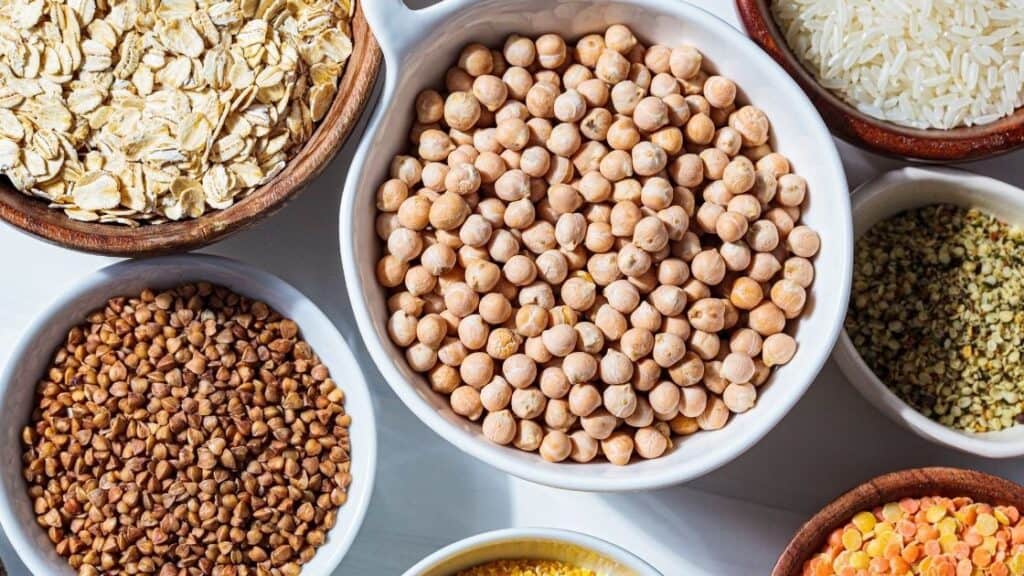 Whole grains are widely regarded as being healthier for you than heavily processed grains such as white flour, and milled oats.

Legumes are also thought to be good for your health.

But, what’s the relationship between legumes and whole grains, and are they the same thing?

Legumes are often called grains in everyday conversation, however, they are not technically grains.

Whole grains are the dried or fresh seeds of grasses such as wheat, or oats.

The reason it gets mixed up is the seeds – which are harvested to eat – both look similar in appearance.

They are also both savory in flavor. But, legumes are generally bigger and contain higher levels of nutrients than grains.

And they are both distinct from vegetables which are grown so that the stem, leaves, or roots of the plant can be consumed.

Fruits by comparison are plants that house their seeds in the flesh which is usually delicious to eat.

But, with legumes and grains, the seeds themselves are eaten, and the rest of the plant is typically not consumed.