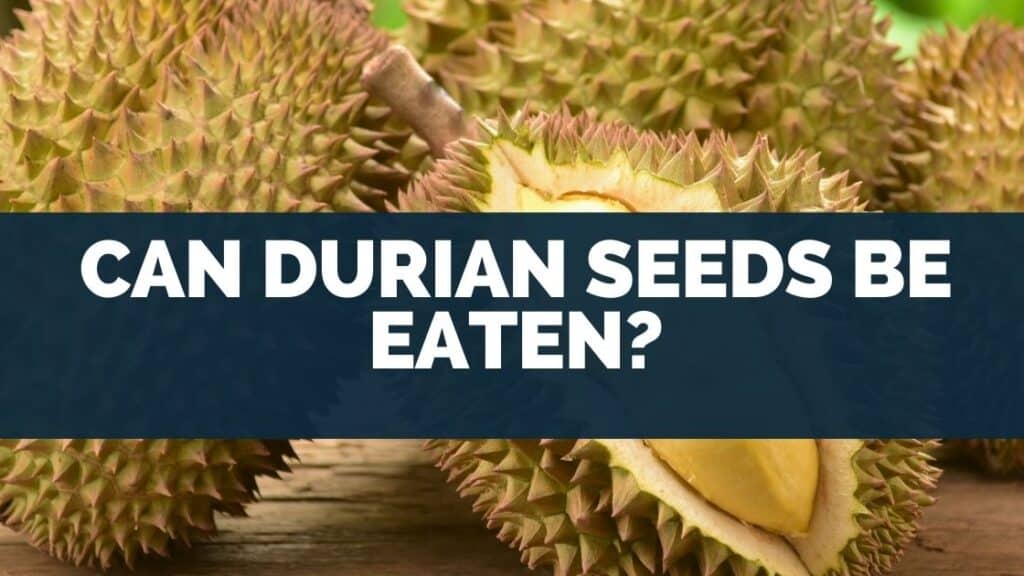 Aptly dubbed the King of Fruits, the durian is a large, spikey fruit of several tree species belonging to the family Durio.

Famous for its strong scent, a durian can grow up to 12 inches long, 6 inches in diameter, and weigh up to 7 lbs.

The rich, yellow flesh of the durian fruit is intensely flavorful and is used in various dishes.

In addition, the large seeds of the fruit can be eaten but must be cooked.

An often neglected part of the fruit, durian seeds can provide additional nutrition.

A note of caution; raw durian seeds contain cyclopropene fatty acids that are known to be unsafe for consumption.

Durian seeds are rounded or oval-shaped and range from yellowish-brown to reddish-brown.

Cooking and consuming the seeds will maximize the nutritional benefit you get out of this famous fruit.

Boiling the seed is easy.

Once the flesh is off, the seed can be washed to remove any residual flesh and soaked for a few minutes.

Then just boil the seed as you would a potato for approximately 30 minutes or until soft.

Remove the skin of the seed, and you’ve got a cooked seed ready for consumption!

They are starchy and have the texture of a slimy baked potato.

First, pierce the durian seed with a knife to prevent them from or cracking in the oven.

Lay the seeds individually on a baking tray and roast in a pre-heated oven for about 30 minutes.

Skin the seed after roasting.

Roasted durian seeds have a texture similar to a chestnut.

The skin of the seed should first be removed, and the seed sliced thinly.

Next, fry up the thin slices in hot oil on low heat, and you get durian chips!

Frying removes the taste of onions, and you are left with a chip that tastes mildly of a french fry.

A safer way to cook durian seeds would be to boil them then fry them, ensuring that they are fully cooked.

It also makes the skin easier to remove and the seed softer to slice up.

Go to top
Table Of Contents show
1 Are Durian Seeds Poisonous?
2 What Are The Benefits Of Durian Seeds?
3 Durian Calories Per Seed
4 What Happens When You Eat Too Much Durian?
5 Conclusion 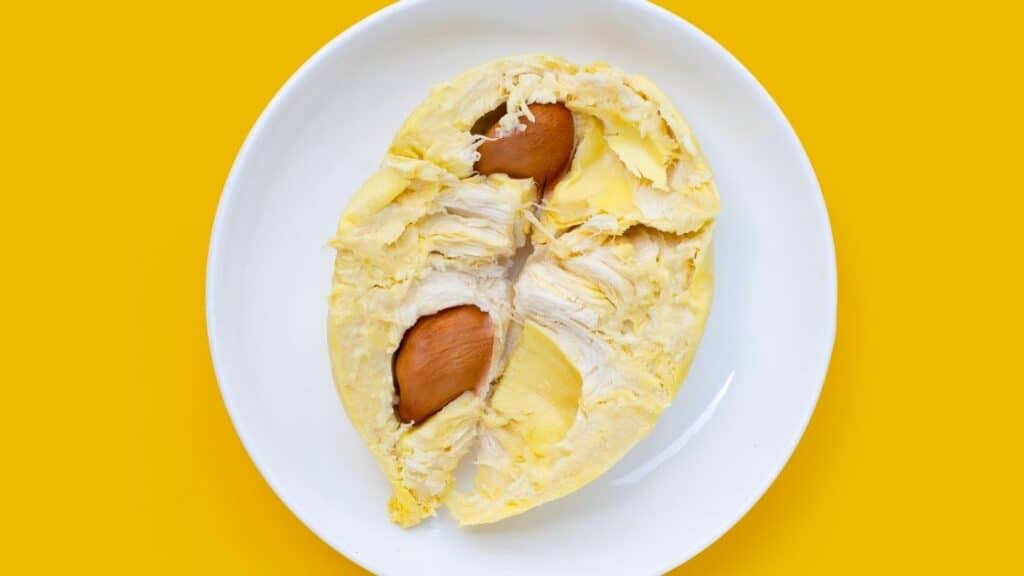 These compounds have been known to be carcinogenic and are harmful to humans.

In addition, durian seeds have trace amounts of hydrogen cyanide.

While the tiny amount of cyanide found in durian seeds is not harmful to humans, it might be toxic to smaller mammals like dogs and cats, so keep durian seeds away from your beloved pets.

Durian seeds need to be cooked thoroughly before consumption.

You can boil, roast, or cut them up into thin slices and fry them.

You can eat the cooked seeds on their own or add them to ice creams and desserts for added texture.

The seed is starchy, and unless you fry them in oil, they tend to be slimy and sticky.

In addition, scientists have recently started experimenting with using the gum from durian seeds to make natural food stabilizers.

One of the applications tested was to use the gum as a stabilizer to extend the shelf life of probiotics in drinks.

Studies have shown that the probiotic count in drinks using chemical stabilizers was significantly reduced in a four-degree Celsius environment after five weeks.

In addition, the gum can also be used to grow probiotics, reducing the production cost from US$44 for every liter to US$9.50. (Source)

What Are The Benefits Of Durian Seeds? 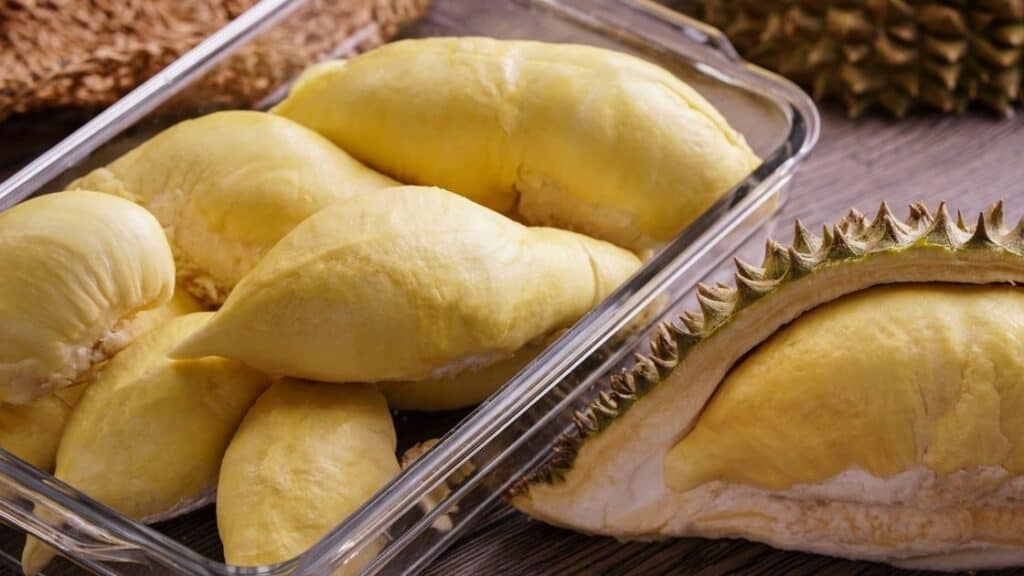 Durian seeds are typically tossed away, and it might surprise folks to know that they are an excellent source of nutrition.

In addition, each average-sized seed has about 1.4g of healthy fat.

Zinc is an essential mineral and found in the second-highest concentration in our bodies, the first being Iron.

It is found in our cells and is a crucial part of our immune system.

Starch is a complex carbohydrate found in rice, wheat, potatoes, and other staple foods.

Soluble fiber dissolves in water and creates a gel that is known to reduce cholesterol and sugar levels.

It helps your body control blood sugar levels and may help in reducing the risk of diabetes.

It moves through the digestive system and eventually finds its way into your colon, or large intestine.

There, it runs into your friendly gut bacteria called probiotics, which are more than happy to munch hungrily on them.

Probiotics are what is keeping your digestive system balanced and healthy.

It boosts your immune system and lines your gut cells to help fight against invading harmful bacteria.

To feed the good guys in the belly, you’ll need to consume enough dietary fiber.

It is estimated that the average American eats only 16 grams of fiber a day.

In comparison, the recommended daily fiber intake is:

In addition to maintaining a healthy gut, fiber has also been credited with: 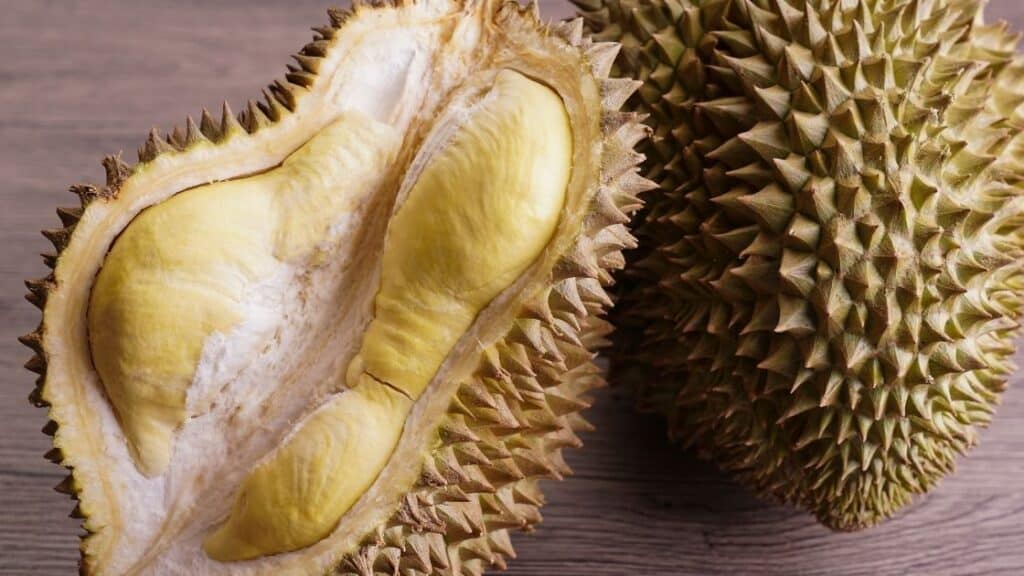 A small durian seed of about 40g of seed and flesh contains about 60 calories and 1.4g of fat.

In comparison, the flesh of a whole durian fruit contains about 900 to 1500 calories depending on its size.

The durian fruit is a highly nutritious fruit rich in fiber, B vitamins, vitamin C, and antioxidants.

One cup of pulp will give you:

Durians aren’t called the “King of Fruits” for nothing. In addition to the nutrients, they have been linked to:

What Happens When You Eat Too Much Durian? 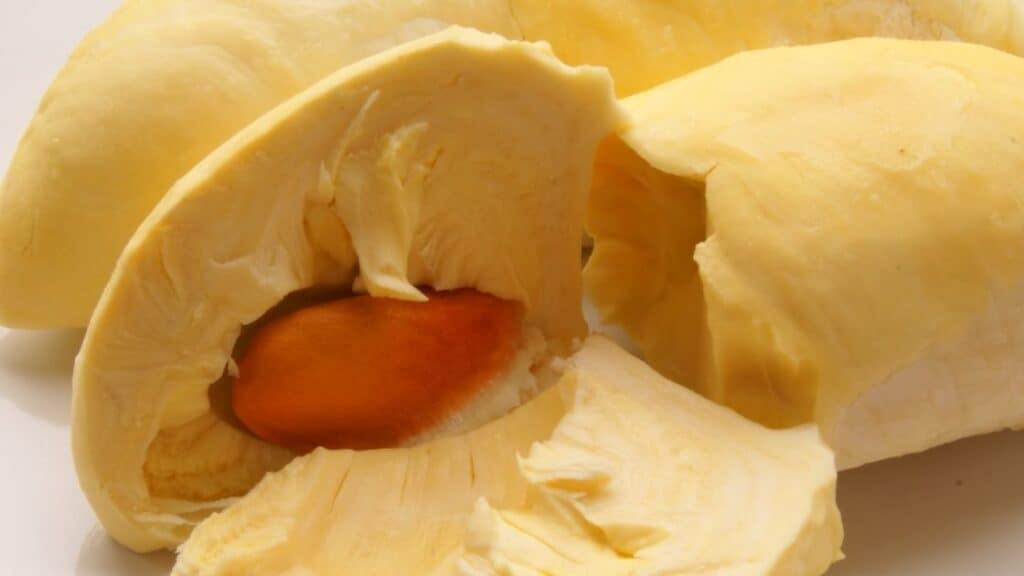 Durians are a rich fruit high in fat, sugar, and calories.

In addition, they are a rich fruit that has to be eaten in moderation.

According to Traditional Chinese Medicine (TCM), the durian is considered a “heaty” food, meaning “yang” energy.

They have “warming” properties, and overconsumption can lead to some illnesses.

Balance the durians out with foods with “cooling” or “yin” energy like apples, mint tea, coconut water, or green tea to avoid side effects.

In addition, durians should not be consumed with alcohol.

The fruit contains a sulphuric compound that slows the metabolism of alcohol.

Your liver is also busy processing both the alcohol and the high sugar and fat content in durians.

If liquor and durians are consumed excessively, some side effects include bloating, indigestion, and a pretty bad hangover.

Even though durians contain no unhealthy fats or cholesterol, it is still high in calories.

A large durian has up to 1,500 calories, making up most of the 2,000 recommended daily caloric intake.

Folks that have type-2 diabetes also should be wary of the number of durians they consume.

Durians are high in the simple sugars sucrose, fructose, and glucose, wreaking havoc on the insulin levels.

Durians aren’t called the King of Fruits for nothing.

In addition to their powerful smell and taste, they are a nutrient powerhouse.

The next time you indulge in one, consider using the seeds as well to save on food waste and extract the maximum nutrients from the fruit.