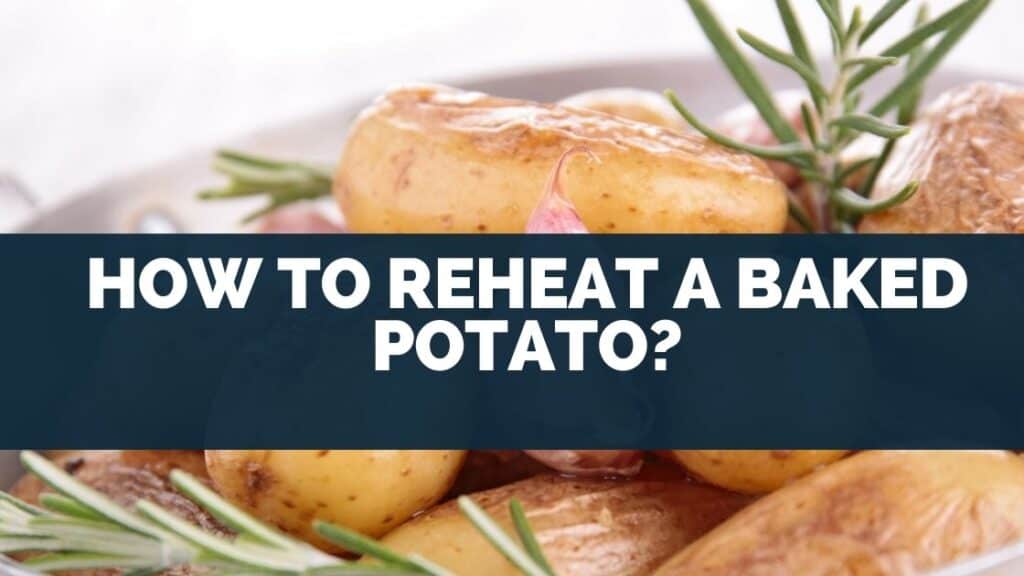 Potatoes are an excellent low-fat source of fiber, carbohydrates, and beneficial vitamins and minerals.

Baked potato and french fries are two familiar side dishes in the United States, with the average American consuming 50 pounds of potatoes annually!

There are several popular ways of reheating potatoes.

While microwaving is the quickest option to reheat a potato, the potato could be dried out and hard.

Pan-frying, grilling, or reheating in the oven would have potatoes come out fluffy with a crispier skin.

If microwaving a baked potato, remember to remove any aluminum foil you’ve wrapped it in.

Use a microwave-safe lid or container to help retain moisture.

Prick the skin a few times on each side.

Baked potatoes are still filled with moisture and could explode in the microwave.

While the quickest way of reheating a baked potato, this isn’t the most popular way as microwave potatoes can be dried up, dense, and lose some of the vitamin C nutrients.

Reheating in the Oven

Pan-frying works best when the potatoes are sliced.

If not, you can halve or cube them.

Cover your potatoes in foil and place them on a grill for 15 to 20 minutes, flipping them at regular intervals to get an even temperature.

Most spud-lovers agree that reheating baked potatoes in the oven is the best method as they won’t dry up excessively.

Although more time-consuming, the taste and flavors are better preserved.

Is It Safe To Reheat Baked Potatoes? 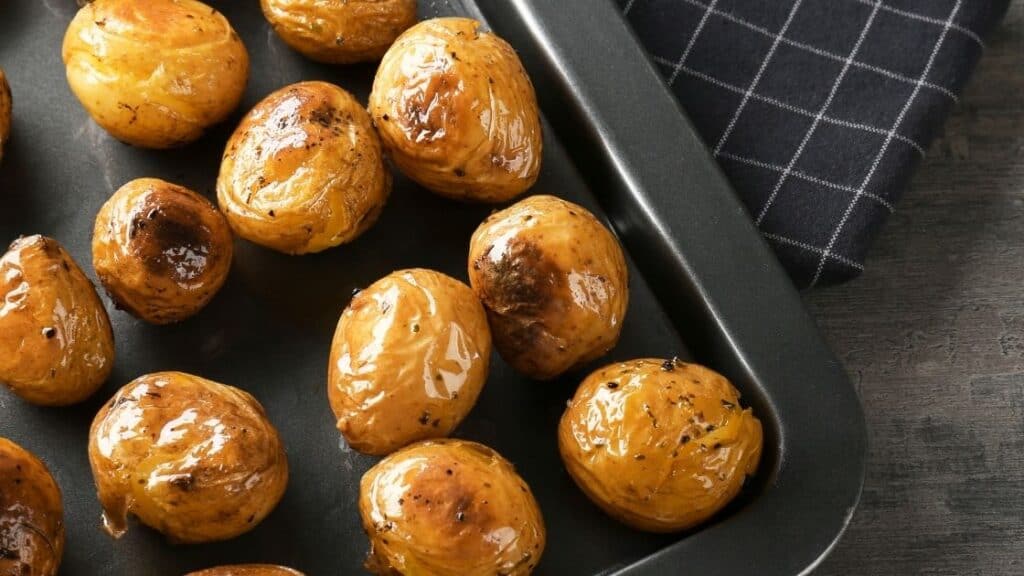 While reheating potatoes is perfectly safe, leaving any cooked food at room temperature for more than two hours can be a food hazard.

According to the FDA, bacteria can form and spread to dangerous levels after two hours and one hour if the ambient temperature is above 90°F.

This is because bacteria spread more quickly in warmer climates, as much as doubling every 20 minutes.

Once potatoes are baked, consume them immediately or refrigerate them the moment they are cool enough.

Foods left out in the open are favorite breeding grounds of the Staphylococcal and Salmonella bacteria.

An infection can lead to severe illnesses that require medical attention.

Baked potatoes in tin foil left out in the open will also be vulnerable to the Clostridium botulinum bacteria.

This bacteria grows in the absence of oxygen, forming spores that are heat resistant and can germinate, causing a dangerous condition called botulism.

Symptoms of botulism include:

The toxins cause muscle paralysis and can spread to the lungs, organs, arms, and legs.

Symptoms can surface between 18 and 36 hours after eating contaminated food.

When reheating the potatoes, make sure that temperatures reach above 140°F to kill any lingering bacteria. 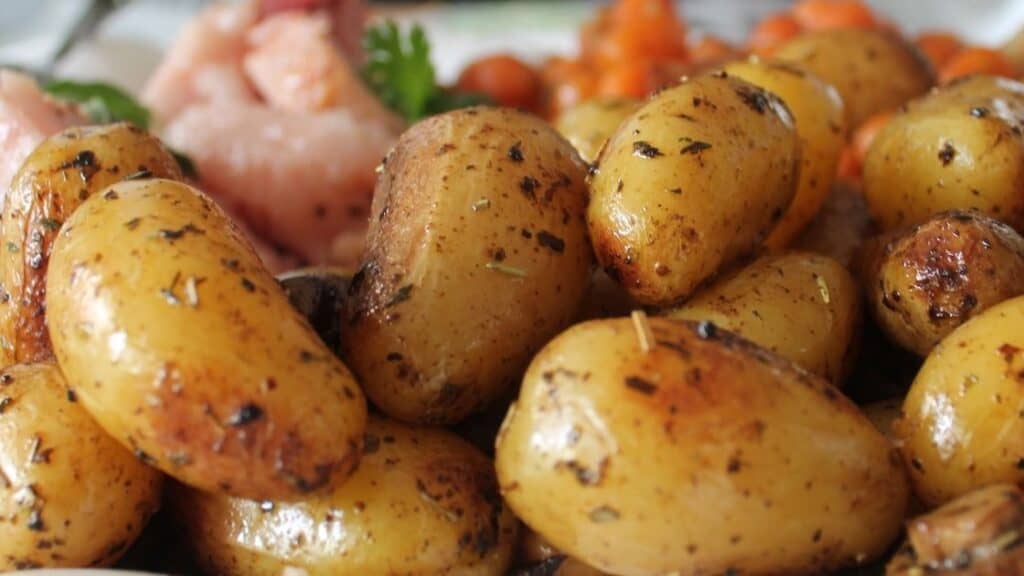 The USDA recommends keeping baked potatoes in the refrigerator for a maximum of four days.

While refrigerators stop the growth of some bacteria, others are more resistant to cold temperatures and can continue to grow at a much slower pace.

FDA recommends that food be kept out for a maximum of two hours and one hour if the ambient temperature is above 90°F.

Once cooked, consume or store potatoes immediately to prevent the growth of harmful bacteria.

Potatoes should be stored in the refrigerator out of the tin foil, and the foil saved for future use if you intend to reheat your potatoes in an oven or grill.

The Clostridium botulinum bacteria is a dangerous microorganism that can form if not exposed to oxygen.

Leaving the foil on would run the risk of this bacteria developing and spreading, resulting in a severe illness called botulism.

The danger zone temperatures are 40°F to 140°F, where bacteria are at their happiest and can spread rapidly to dangerous levels within an hour or two.

Food left out for long periods are favorite breeding grounds of the Salmonella and Staphylococcal bacteria.

In addition, many other pathogenic microorganisms like yeasts and mold can cause food-borne sickness.

These pathogens can develop in foods undetected with no effect on color, smell, taste, or appearance.

When reheating potatoes, always make sure the temperatures are higher than 140°F.

How Long Can You Store Leftover Baked Potatoes? 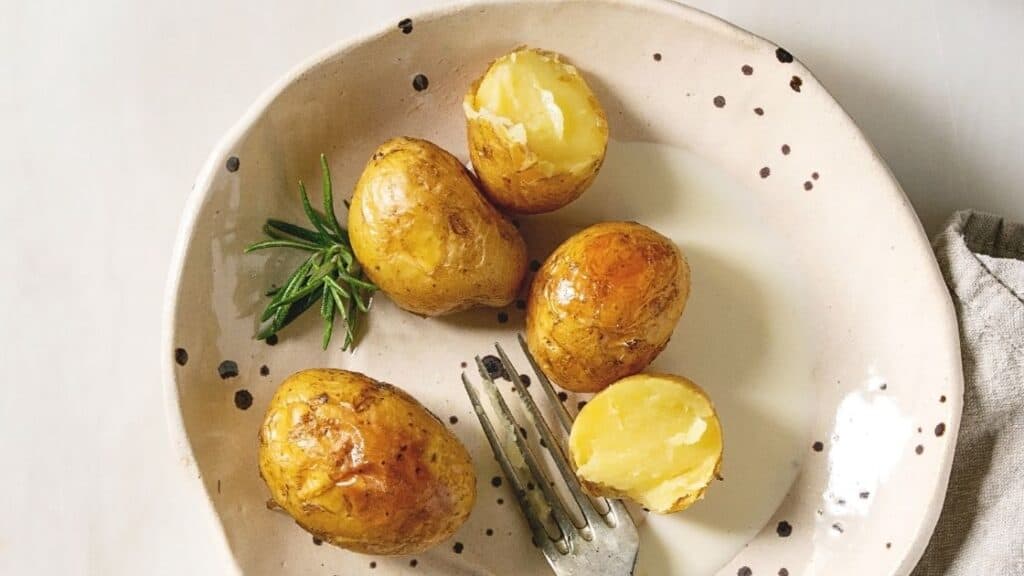 According to the USDA, baked potatoes last up to four days in the refrigerator.

If you have used aluminum foil, remove the foil right after baking to prevent the spread of the botulinum bacteria.

Do not place a wrapped baked potato in the refrigerator.

Be wary of the refrigerator’s temperature and avoid overstocking the fridge, causing less circulation of cold air and increasing the overall temperature.

While leftover baked potatoes store best below 40°F in the refrigerator, freezing them would significantly increase the shelf life.

For optimal results, freeze baked potatoes without any fillings or toppings, as that might make the potatoes go soggy.

If freezing potatoes, it is safe to use airtight containers or resealable freezer bags.

If not placed in an airtight container, the potatoes might get freezer burns.

Freezer burn is a phenomenon that happens when food is frozen for an extended period and starts to lose moisture.

When oxygen takes the place of water, the food becomes tough, dry, and often discolored.

Before storing baked potatoes, sprinkling some salt on the exterior will help draw moisture out, giving it a fluffy texture and enabling slightly longer storage.

In addition, it is unsafe to reheat baked potatoes more than once.

The NHS recommends you don’t freeze food more than once.

Cooling and reheating food multiple times can contribute to a higher risk of food poisoning.

Bacteria can continue to multiply when cooled too slowly or when inadequate temperatures are reached during reheating.

Simply reheat leftover baked potatoes once and consume them immediately.

Do You Refrigerate Leftover Baked Potatoes? 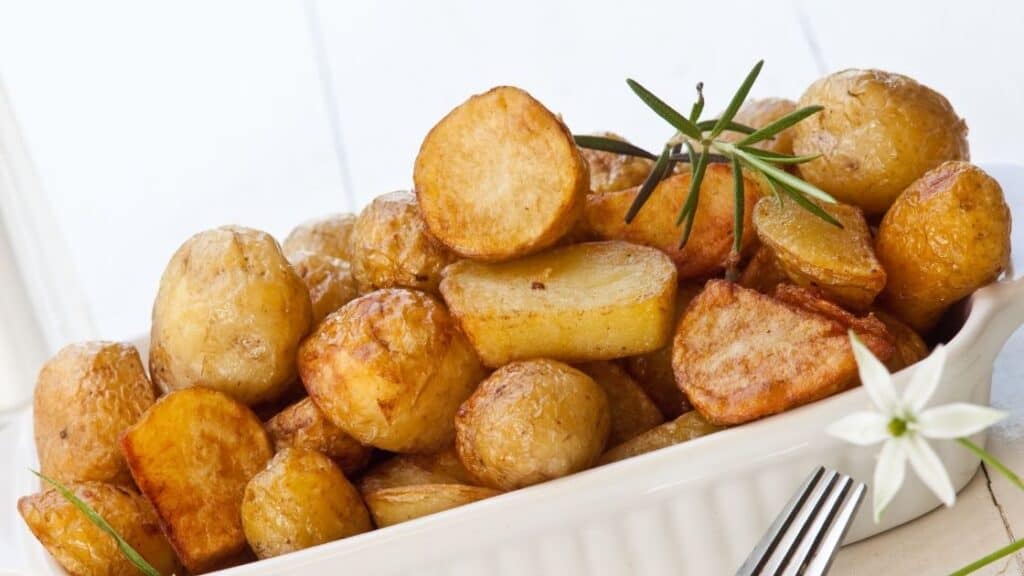 Yes, leftover baked potatoes MUST be refrigerated or frozen for storage.

Refrigerated potatoes are good for up to four days.

While potatoes have a high starch content and shelf life, small mistakes can lead to food spoilage and dangerous bacteria levels, which could cause food poisoning.

Potatoes must be refrigerated between 0 to 40 degrees Fahrenheit.

The danger zone temperature range of 40°F to 140°F allows bacteria to spread and multiply rapidly, often to unsafe levels.

The FDA recommends food be left out for a maximum of two hours and one hour if the surrounding temperatures are above 90°F.

Food left out for more than these time limits risks being contaminated with microorganisms like bacteria, mold, and yeast.

Bacteria is the leading cause of food poisoning and is responsible for many illnesses, such as:

Potatoes are best stored without fillings and toppings.

Dairy has a different shelf life than potatoes and could be the culprit behind an upset stomach.

Potatoes should be stored without tin foil because of the Clostridium botulinum bacteria, a dangerous microorganism that can form only in the absence of oxygen.

Leaving the foil on would run the risk of this bacteria spreading, resulting in a severe illness called botulism.

Botulism causes muscle paralysis that can affect the lungs, organs, arms, and legs if untreated.

It is a severe disease that can result in life-threatening illness and must be treated immediately by a medical professional.

Always visually inspect potatoes before consumption to check for mold.

Smell the potato, and if a sour or strange smell is present, it’s better to be safe and chuck it out.

However, some bacteria that invade food left out in the open do not affect the odor, appearance, smell, or color.

When in doubt, always throw it out!