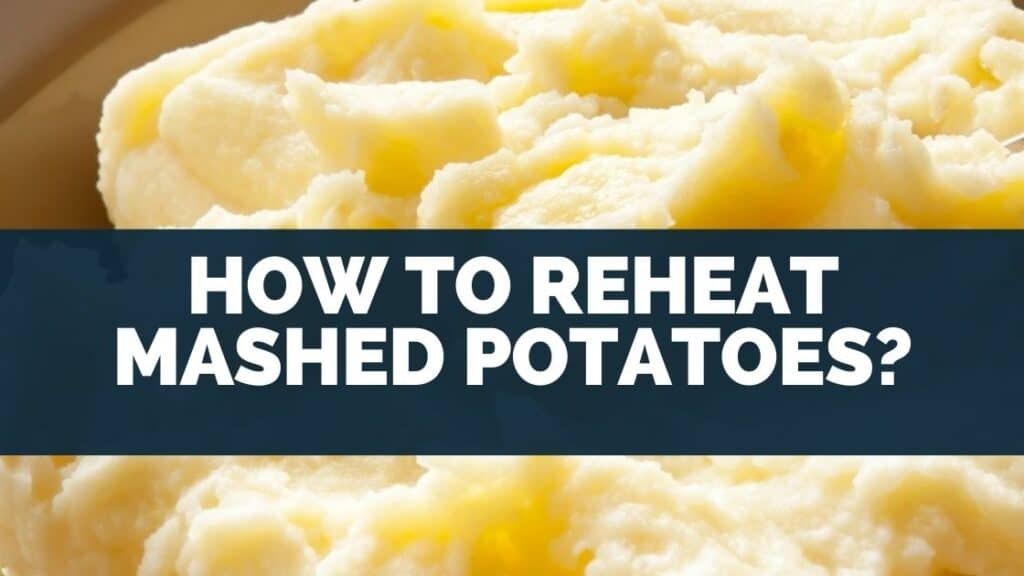 Mashed potatoes are one of my favorite side dishes.

I generally refry it to make it crispy and hot.

But, I was curious about other ways to reheat mashed potatoes to keep them in their mashed potato form and here’s what I found out.

Mashed potatoes can be reheated in the oven, microwave, or in a bain-marie.

The easiest method is to pop them in the oven.

Microwaving is faster but you need to stop and start it every minute or so.

How to Keep Mashed Potatoes Warm? 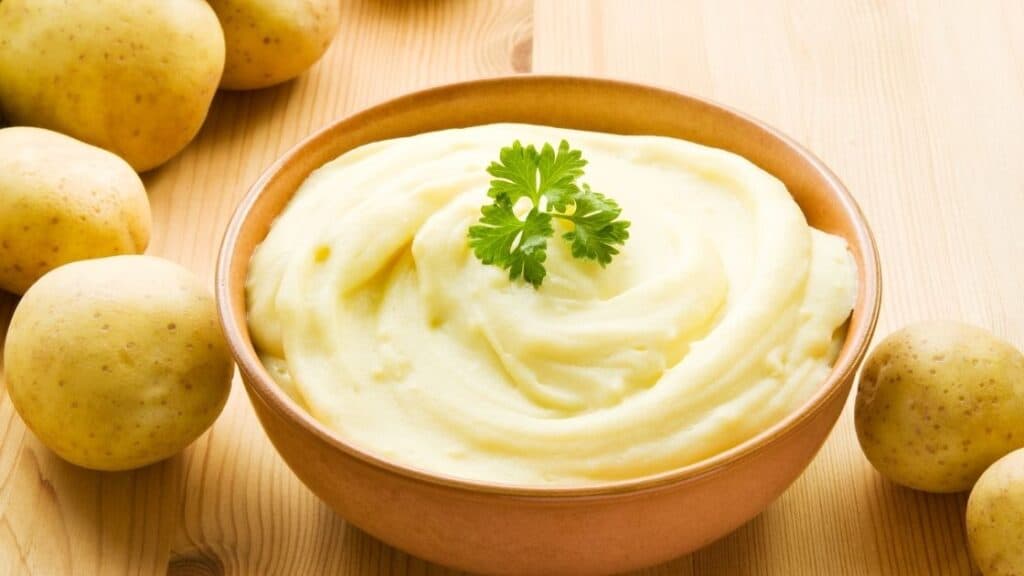 With cooking, I often run into a situation where one part of the meal is cooked, but the other is still cooking.

So, it’s necessary to keep it warm which is a bit of a challenge. So how do you keep mashed potatoes warm?

Keep mashed potatoes in a pot, and keep them in a bain-marie.

A bain-marie is where you place one pot in another pot that is filled with hot water on low heat.

It keeps the mashed potatoes warm without cooking them, and burning the bottom.

To keep the entire pot/bowl of mashed potatoes warm, give it a stir every minute or so.

And if you’re reheating leftovers.

The main thing is you want to keep the mashed potatoes moist.

So, before microwaving them, sprinkle a little bit of water on them, and mix it in.

Also, when you microwave them, put a layer of plastic wrap – also called cling film – over the entire bowl of mashed potatoes.

As they heat up, the steam will rise and collect on the film, and then drip back into the potatoes without escaping and drying out the mashed potatoes.

Reheating mashed potatoes in the microwave is quicker than reheating them in the oven and takes about 10 minutes at the most.

When reheating them in the oven it takes 20 minutes plus the time it takes to preheat the oven.

Here’s a quick video that shows how to reheat mashed potatoes in the microwave.

The same is true if you’re reheating them in the oven.

But, the plastic film will melt, so it’s best to use tinfoil.

Frying mashed potatoes are also good and create a crispy layer on the outside which adds another depth of flavor.

It’s also possible to create small balls of mash potato and fry them into something that’s like tater tots or gnocchi.

Keeping mashed potatoes in the oven on low heat with tinfoil

You can also keep mashed potatoes in the oven on the lowest heat your oven can go on.

Provided you keep tinfoil on top of the pot or bowl the water content will stay in the mashed potatoes and they won’t dry out.

But, you’ll generally need to give them a thorough mix before serving them to mix all the water back in.

The best place to keep mashed potatoes warm is in the oven or microwave where they will be insulated from the wind.

Chafing dishes are common in buffet restaurants and among caterers.

These are the same as a bain-marie and work very well to keep the food hot.

Water is kept hot but not simmering underneath a metal tray that the food sits in.

Leave out the butter and milk and seasoning out

Generally, it’s best to only mash the potatoes themselves to keep them warm.

And then add the milk, butter, cheese, and seasonings when you’re ready to serve.

This gives the best flavor, and milk and butter can tend to develop a funny taste when heated over a long period of time.

5 or 6 people online, including one person who worked in a restaurant, recommended this when the question was posed in a Reddit thread.

And said that the mashed potatoes turned out much nicer when done in this way.

Peeled potatoes will start to oxidize and turn brown when left out.

And is similar to fruits like bananas and apples that turn brown on the surface when peeled and cut and left exposed to the air.

However, pre-peeling and cutting potatoes can be more convenient depending on the way you’re preparing a meal.

Or, if you’re cooking a meal with an assistant who HAS to go because of a TV show or some other activity.

How Long Are Mashed Potatoes Good for? 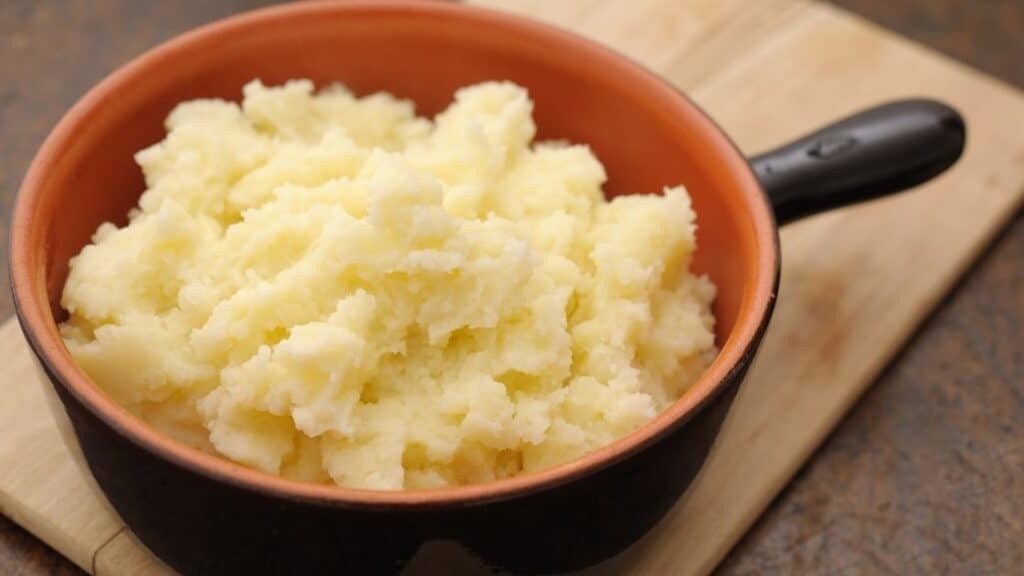 When I make mashed potatoes I generally make more than I can eat because it’s a bit of a process to make them.

However, I wanted to know how long mashed potatoes last in the fridge?

Generally, 3 to 5 days in the fridge and a maximum of 7 days.

But, mashed potatoes can also be frozen.

However, they can keep for much longer.

As mashed potatoes start to go bad they develop a bad odor.

The edges also start to turn brown, and mold can grow on the surface. At this point, it’s best to throw them out.

If you leave them on the counter or pantry they will last one to two days at room temperature before the butter and milk will turn rancid and they’ll develop a sour smell.

If you live in a warmer climate, or it’s summer then they go bad much quicker.

The additional heat speeds up chemical reactions and the growth of bacteria which causes the mashed potatoes to go bad.

The main part of the mashed potatoes that goes bad is the milk and butter.

As well as, cheese if you add cheese to your mashed potatoes.

Can You Get Sick from Eating Old Mashed Potatoes? 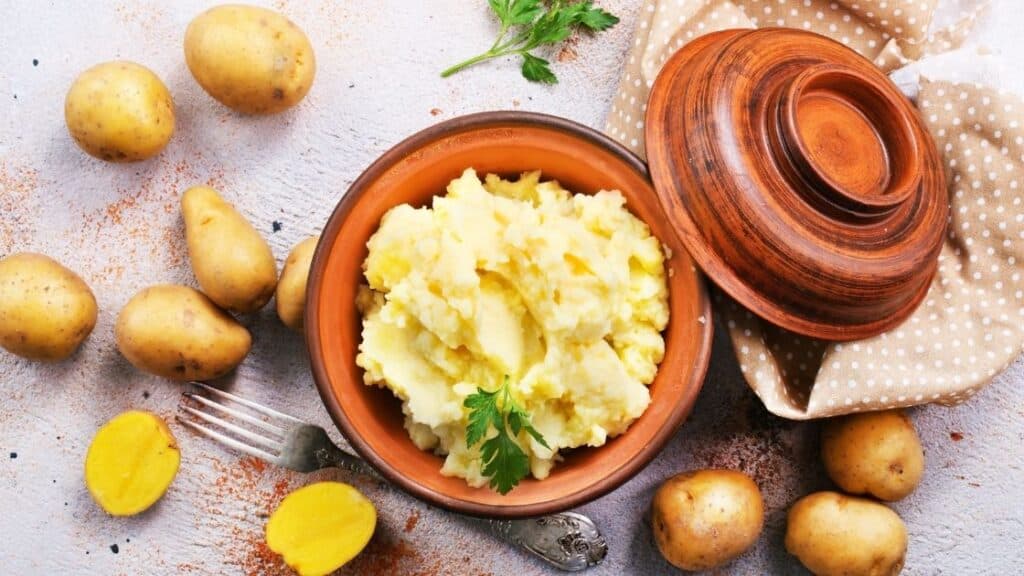 Sometimes part of leftover mashed potatoes can be moldy, but the interior still looks and smells fine.

But, can you get sick from eating mashed potatoes?

Overall, you can get sick from eating old mashed potatoes.

The butter and milk will be off and can give you stomach discomfort, cause vomiting and/or diarrhea, and give you a headache.

The body will generally try to expel toxins before they can be absorbed into the body.

The exterior can be spoiled but is protecting the interior of the mashed potatoes.

So, technically the interior of a large bowl of mashed potatoes can be fine while the exterior has gone bad.

The best test is a smell and taste test.

Rancid milk and butter have a sour taste that is very unpleasant.

Try a small part and see if it still tastes delicious.

If it tastes slightly sour, then it’s best to discard it.

Also, if there is visible mold on the mashed potatoes you should not eat it.

As there are various molds that contain toxins that can give you food poisoning.

In preparing mashed potatoes you can come across potatoes that are black as you mash them.

It can occur that the interior of the potato has developed what is called a black heart.

Which is a bit of a pain especially when you only notice it after you’ve boiled the potatoes.

When boiling potatoes for mashed potatoes, it’s best to cut them in half, or quarters after peeling them to see whether any of them have blackheart and to make them easier to mash.

It also reduces the cooking time.

I explained factors that cause blackheart to develop in potatoes in this article about why potatoes turn black.

What Happens if You Eat Old Mashed Potatoes? 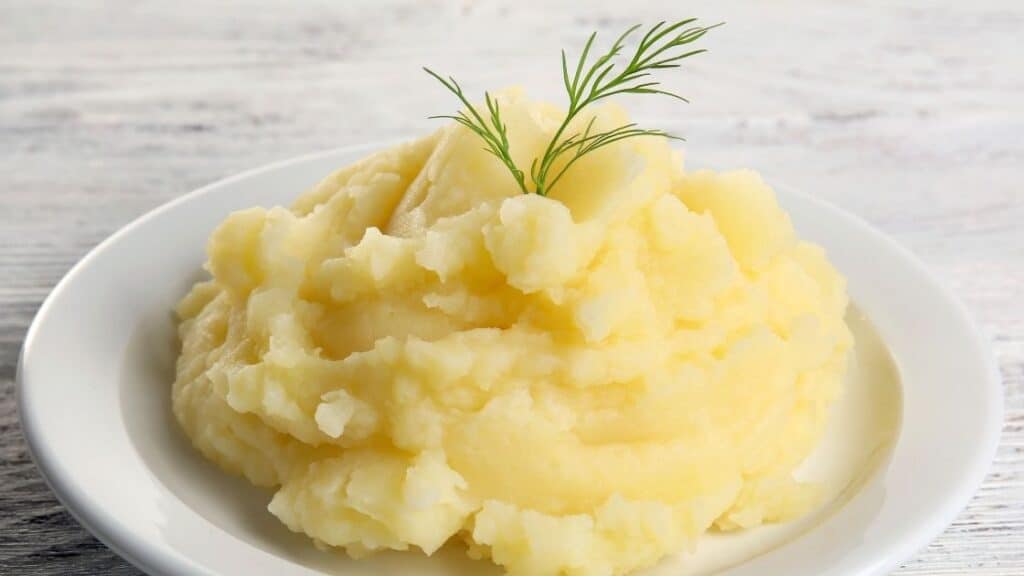 Old mashed potatoes can still be good for about a week or less in the fridge.

But, is it bad to eat old mashed potatoes, and does anything happen if you do?

Overall, it’s perfectly fine to eat old mashed potato provided it does have visible mold, or has a sour rancid smell.

If you eat old mashed potato that has a sour rancid smell or has mold on it, it can give you an upset stomach, diarrhea, a headache, or cause nausea and vomiting.

Visually inspect old mashed potatoes for any signs of discoloration, and mold.

And also smell it to see if it has a sour or unpleasant smell.

However, it can be dry and not very appetizing.

It’s easy to remove the discolored part with a spoon leaving only the normal colored mashed potato.