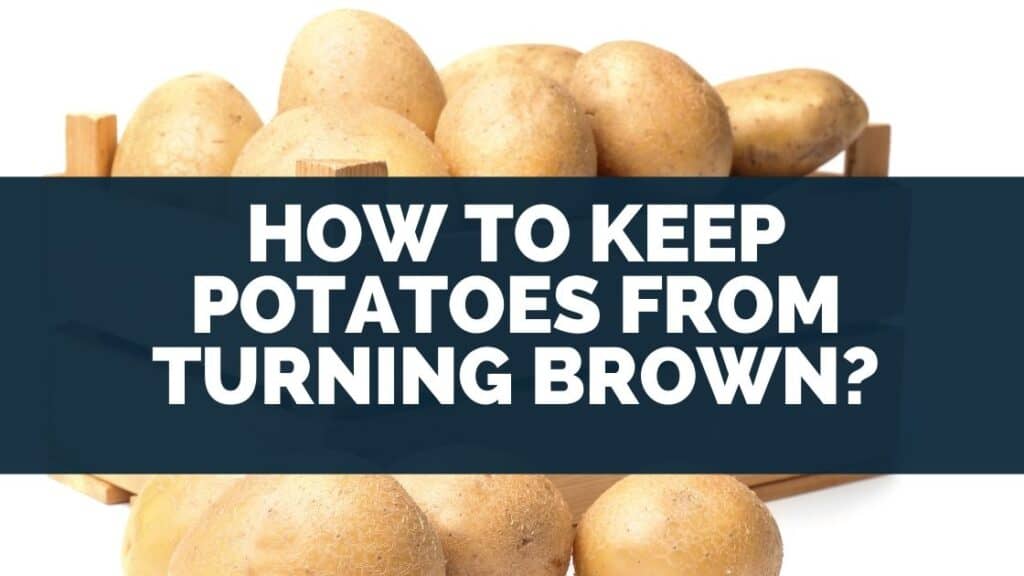 I’m pretty organized, and I was wanting to cut and peel some potatoes ahead of time.

But, I’ve noticed they always turn brown and wanted to know how to stop it from occurring.

I did some research into how to do it, and here’s what I’ve discovered.

However, it’s best not to leave them in water for more than 48 hours, as they will start to break down.

It’s generally best to keep them submerged in water in the fridge to reduce the growth of bacteria.

Many people wonder whether soaking them in salted water is better, as well as, how long will cut and peeled potatoes last before they turn brown.

So, below I’ll explain the answers to these questions, as well as, whether olive oil helps keep potatoes from turning brown.

Go to top
Table Of Contents show
1 Does Salt Water Keep Potatoes From Turning Brown?
1.1 Soaking potatoes in water also has other benefits
1.2 Always use plastic or a glass bowl rather than metal for soaking potatoes
1.2.1 Does vacuum-sealing potatoes stop them from turning brown?
2 How Long Before Cut Potatoes Turn Brown?
3 Will Olive Oil Keep Potatoes From Turning Brown?
3.1 Roasted potatoes can discolor in the oven before they’re cooked
4 What Happens if You Leave Potatoes in Salt Water Overnight?
4.1 How long do potatoes keep for? 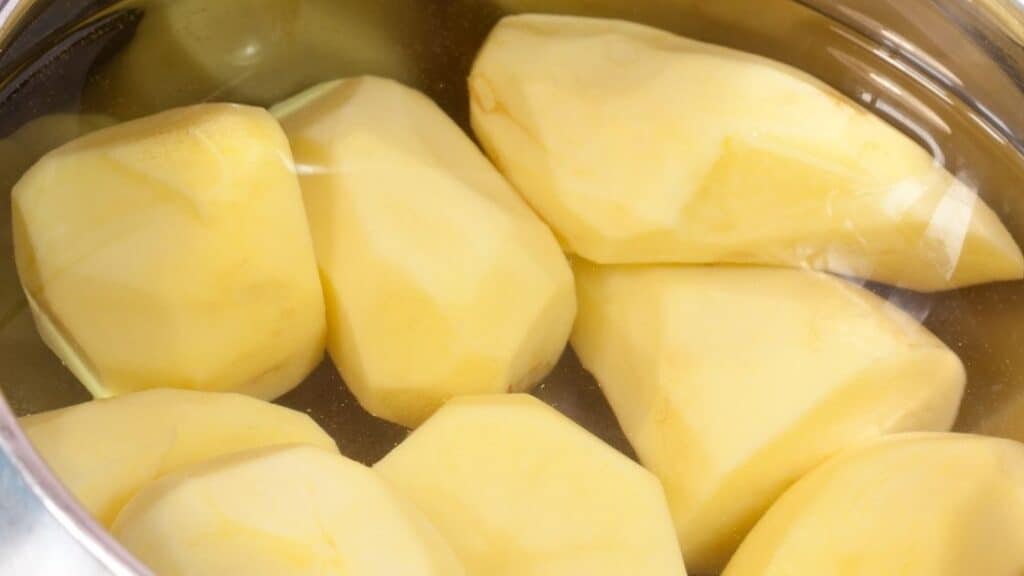 It’s common for people to soak potatoes in salted water to improve their taste.

But, will salt water also keep potatoes from turning brown.

But, water on its own will also keep potatoes from turning brown.

When potatoes are kept in water to stop them from going brown they need to be completely submerged.

Water acts as a barrier between the air and potatoes and stops chemical reactions taking place that cause the potatoes to go brown.

Interestingly, salting the water can cause the potatoes to absorb more water, and the surface can get a bit soggy.

According to Idaho potatoes, the recommended amount of time that waters should be kept submerged in water is 24 hours.

Whereas, others have recommended no more than 48 hours.

Therefore, as a good run of thumb, you should aim to not keep them submerged in water for more than 48 hours.

And ideally the less time they spend in the water the better.

Soaking potatoes in water also has other benefits

As you may know, soaking potatoes in water also removes starch.

This helps the potatoes to keep their shape after they’re cooked and changes the flavor.

Generally, starchy foods are quite ‘heavy’ meaning they fill you up, and can make you feel lethargic.

Examples are breadfruit and taro which are even more starchy than potatoes.

For that reason, removing the starch from potatoes can make them lighter on the stomach, and can be preferred.

Soaking potatoes in water is also recommended for chips, as it removes the start which helps keep the shape of the chips.

Chef’s also recommended adding a bit of lemon or lime juice or a cap of vinegar to the water.

It improves the appearance of the potatoes, and also adds flavor that makes them taste more delicious.

There are a range of ways to make cut potatoes used to make chips taste the best such as double frying them.

It’s recommended to use a plastic or a glass bowl when soaking potatoes.

Potatoes can discolor as they react with iron.

Which can be present in metal bowls.

Also, it’s a good idea to place a layer of plastic wrap over the top of the bowl as it will stop dust in the air from settling in the water.

When kept in the fridge it will also stop flavors from other foods from altering the taste as the microparticles from settling and dissolving in the water.

Does vacuum-sealing potatoes stop them from turning brown?

Generally, vacuum sealing potatoes does stop them from turning brown.

People have reported that vacuum-sealed potatoes can last for a week or more without showing any signs of discoloration.

Many people also wonder whether you can freeze potatoes.

Freezing cooked potatoes can work but only when they’re cooked in certain ways.

I explained all of this and the best way to freeze potatoes in this article about whether you can freeze whole potatoes.

Here’s also a quick video that shows the process from start to finish, for keeping potatoes in water, salted or otherwise so that they don’t turn brown: 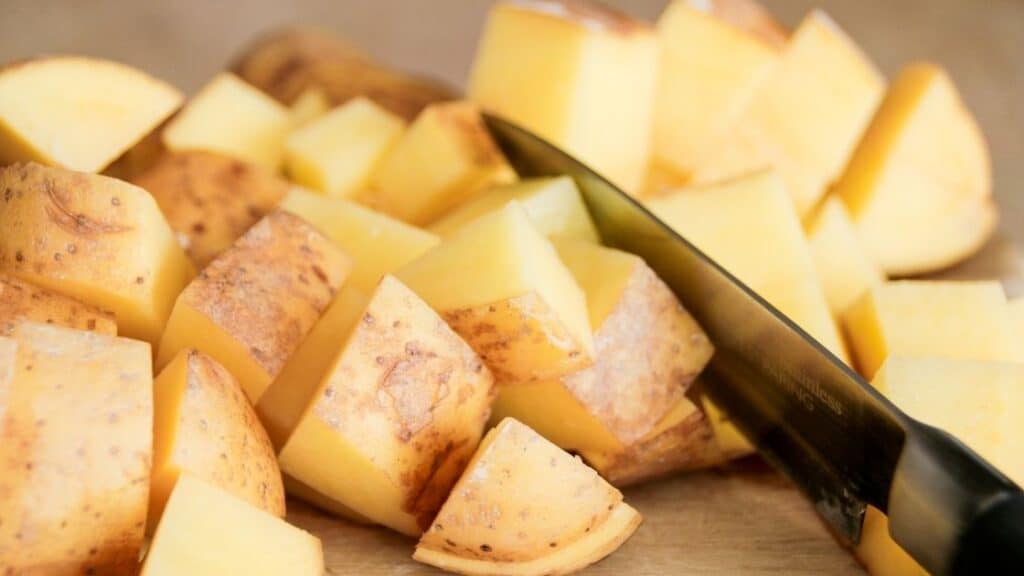 When you peel and cut potatoes and leave them before cooking them they start to oxidize and turn brown.

Although it doesn’t affect the taste they don’t look as appetizing.

But, how long does it take for cut potatoes to turn brown?

Cut potatoes turn brown in about 15 to 30 minutes.

This can be impacted by a range of factors such as how warm the room is, where they’re kept, and the humidity.

In more humid climates the water in the air means there is less oxygen available for oxidation to occur.

If you watch potatoes that have been cut you won’t notice they’re turning brown because it happens a bit more slowly.

Similar to if you set down a half eaten apple.

Or cut some apple slices ahead of time. 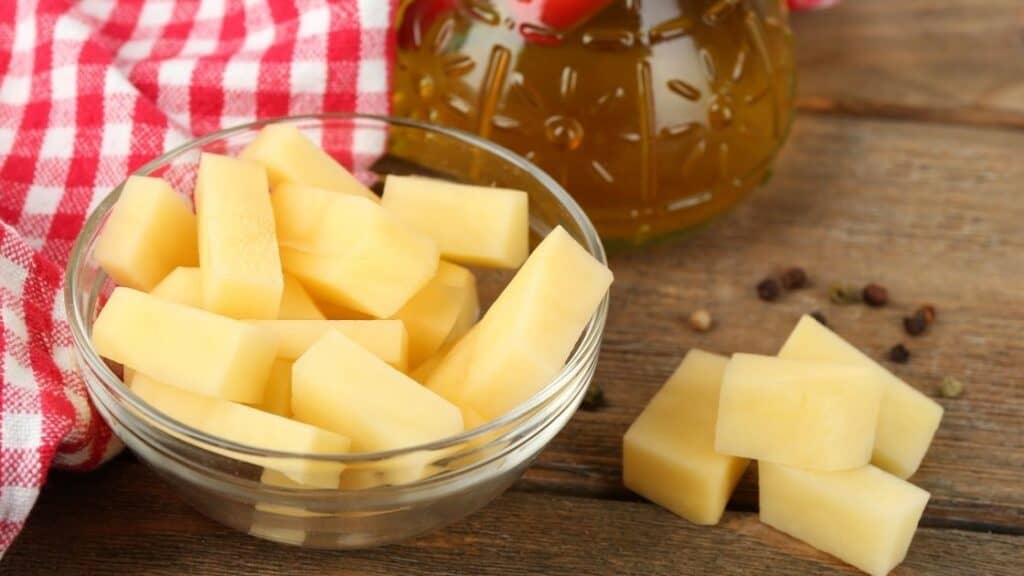 Olive oil is a popular cooking oil and salad dressing.

But, does coating potatoes in olive oil keep them from turning brown?

As a general rule, olive oil will keep potatoes from turning brown.

But, the potatoes need to be completely covered in olive oil.

Olive oil acts as a barrier between the air and the skin of potatoes that stops the oxidation process from occurring.

Generally, water is very inexpensive, whereas you need to spend a few bob on olive oil.

Therefore, water is preferred to olive oil to keep potatoes from turning brown.

And it also has the exact same effect.

Also, once you’ve preserved the potatoes in water you don’t need to spend much extra time to remove them like you do with olive oil.

In some ways of cooking potatoes, this is ok, for example, if you’re going to deep fry them.

But, for other recipes such as potato salad, having to remove the olive oil so that the potatoes don’t have an olive oil taste can be a bit of a chore.

Roasted potatoes can discolor in the oven before they’re cooked

Roasted potatoes can take 30 minutes or more to fully cook.

During that time they can discolor.

A good rule of thumb for roasting potatoes is to cut them right before you’re about to roast them.

Or, to leave them soaking in water until you’re about to cook them.

Then, drain the water and roast them.

This limits the amount of time that the cut parts of the potato are exposed to the air.

After soaking potatoes it can also help them develop a nice crispy skin, while the inside is fluffy and moist.

What Happens if You Leave Potatoes in Salt Water Overnight? 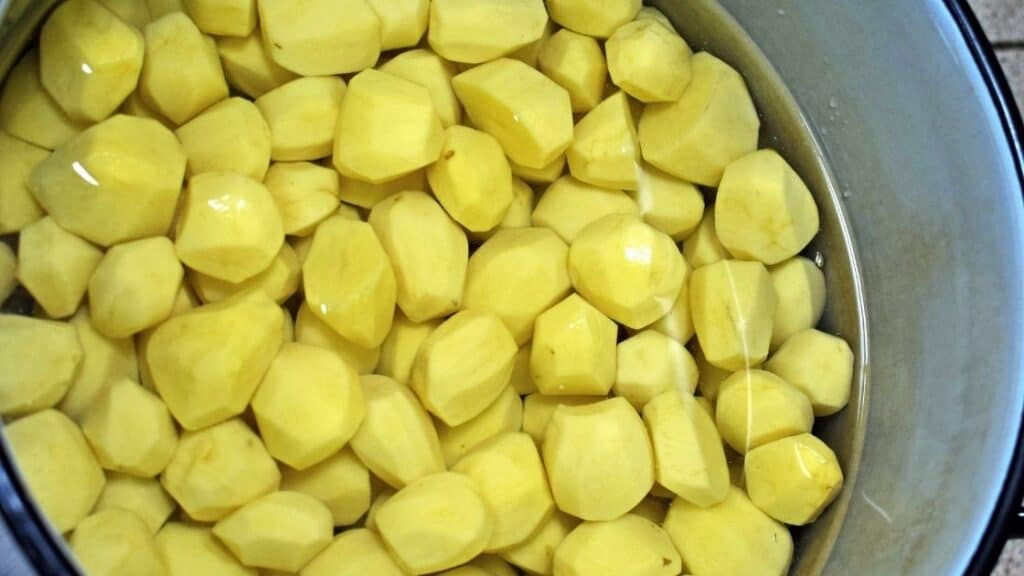 Or, not get around to cooking some potatoes that you have soaking in water overnight.

So, what happens if you leave potatoes to soak in salt water overnight.

Nothing significant happens if you leave potatoes to soak in salt water overnight.

There is anecdotal evidence to suggest that leaving potatoes to soak in salt water overnight for 5 days or more doesn’t have any effect.

The main thing to be aware of is to ensure that the potatoes are fully submerged in the water.

If part of the potatoes are left sticking out of the water or are on the surface of the water they will be in contact with the air and will begin to oxidize and turn brown.

Whole potatoes can develop dark black spots on the inside, which you may have come across.

It’s not noticeable for the outside of the potato.

It’s possible you’ve come across this and wondered what it is, and whether it’s because the potatoes have been in the pantry too long.

I explained what causes it in this article about why potatoes turn black.

How long do potatoes keep for?

Uncooked potatoes that are kept in a cool, dry, and dark place can last up to 6 months.

Some people have also reported that they can last virtually forever.

When buying potatoes it’s important to look for ones that don’t have ‘eyes’.

These are the small shoots that appear as bumps on the surface of the skin.

They can be cut out of a potato but they tend to go deep into the potato which can lead to cutting out quite a bit of the potato.

And they also aren’t as visually appealing when you roast the whole.

The signs that a potato is starting to turn inedible is when the skin starts to turn green.

The skin can also begin to wrinkle and they become soft.

Many people are aware that green potatoes contain a toxin called solanine.

It’s generally a good idea not to consume them but you can still eat them.

I explain how much green potato you can eat here where I discuss if soft potatoes are safe to eat.