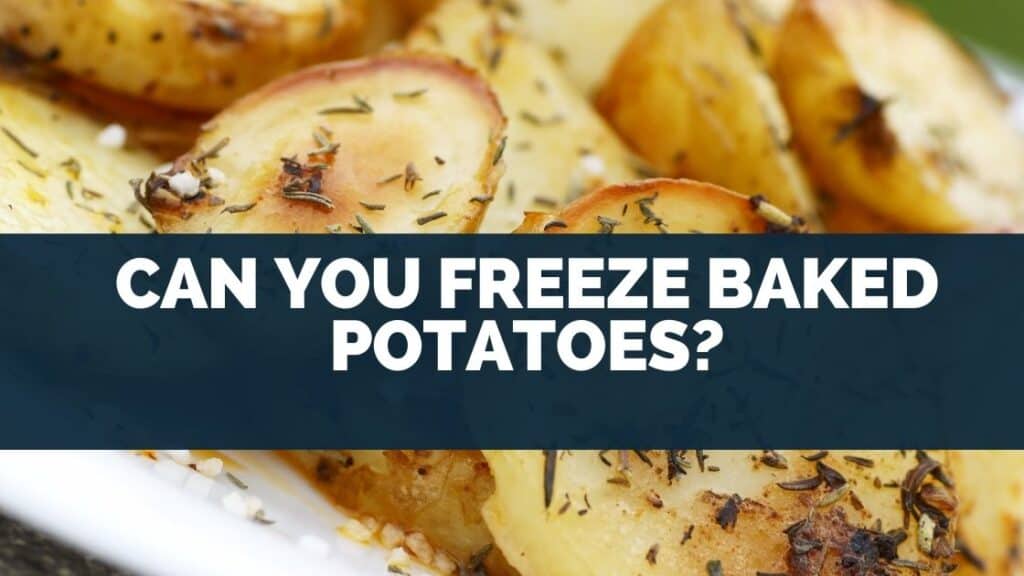 I thoroughly enjoy eating baked potatoes, but I often find I have some leftovers that I don’t feel like eating the next day.

So, I was curious whether I can freeze baked potatoes.

I looked around at what people that tried freezing baked potatoes have found and thought I’d summarize it in this article.

Generally, you can freeze baked potatoes.

However, they tend to change the texture, and they are grainy once defrosted.

Today, I’ll cover the best way to freeze baked potatoes, how to defrost them, how long they last in the freezer, and whether potatoes freeze well.

What Is the Best Way to Freeze Baked Potatoes? 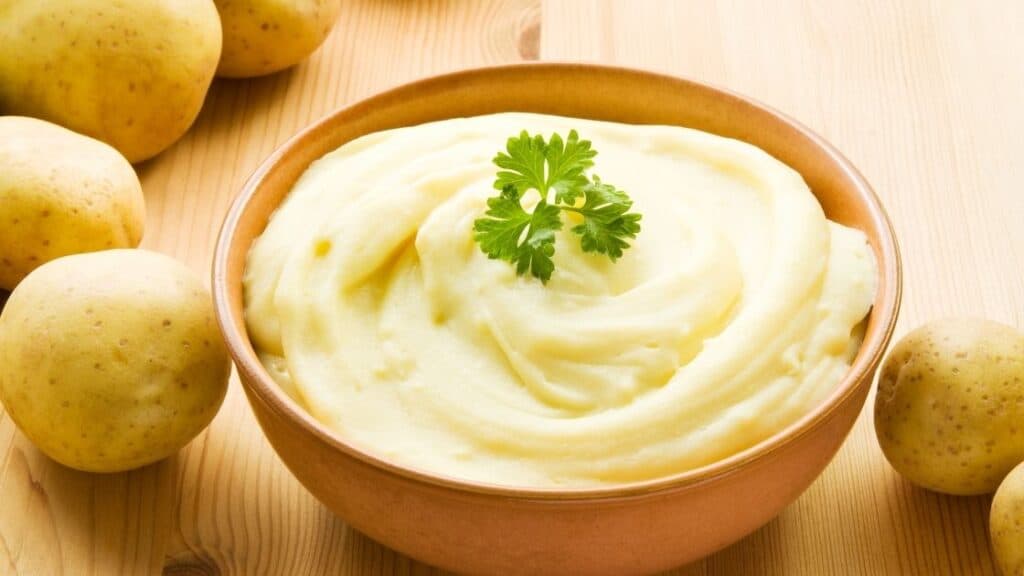 Since there are so many ways to freeze potatoes, it’s difficult to know which is the best.

So, here’s what I’ve found is the best way to freeze baked potatoes.

Overall, turning them into frozen mashed potatoes without any of the condiments is the best way to freeze baked potatoes.

Frozen mashed potatoes can be turned into shepherd’s pie/cottage pie as well.

Or frozen in plastic bags.

That way you can defrost 1 just for yourself, or a few if you’re preparing a meal for a group.

But, the main thing is not to prepare mashed potatoes as you normally would.

By that I mean don’t add butter, milk, salt, or pepper.

The reason is they freeze OK, but not the greatest.

Therefore, it’s better to add them in once you defrost the mashed potatoes.

Therefore, if you have some leftover baked potatoes it’s best to mash them without adding any other ingredients, and then freeze them.

As you may know, the difference in name is based on the kind of meat used.

At the end of the day, either of these kinds of pies are simply minced meat and a delicious sauce with mashed potato on top.

In my opinion, it will be more delicious if you prepare the meat part of it fresh.

Then defrost and heat the mashed potatoes, add other ingredients you like to use such as butter, salt, and pepper, and then put it into the oven.

It’s common to add some cheese on top and then grill it or melt it in the oven, however, this is optional.

But, making it into shepherds or cottage pie completely before freezing can also work well, and people report it turns out pretty good when defrosted and reheated.

If you haven’t yet baked the potatoes are looking for a good way to preserve them some other good options are:

These are commonly sold in the freezer section of grocery stores and supermarkets.

Some people have commented that par-boiling/blanching them first works well.

This is where you boil them for 3-4 minutes to lightly cook them, but don’t cook them all the way through.

Whereas, others have said that doing that isn’t the best. McCain is a large company that produces frozen fries.

They say that they cook them for 1 minute to 5 minutes first depending on the type of potatoes, they remove the excess oil by letting it drip off and shaking them in a vibrating conveyor belt before freezing them.

Soaking potatoes is quite common, however, some people aren’t aware of why it’s done, and if you should.

In general, soaking potatoes removes some of the starch which has a few flavor, texture, and health benefits.

In another article, I explained why soak potatoes.

In it, I explain how to do it, how long they can soak for, as well as, whether soaking potatoes removes calories.

Spoiler alert – it does reduce the calories of potatoes.

But, not by much.

How Long Do Baked Potatoes Last in the Freezer? 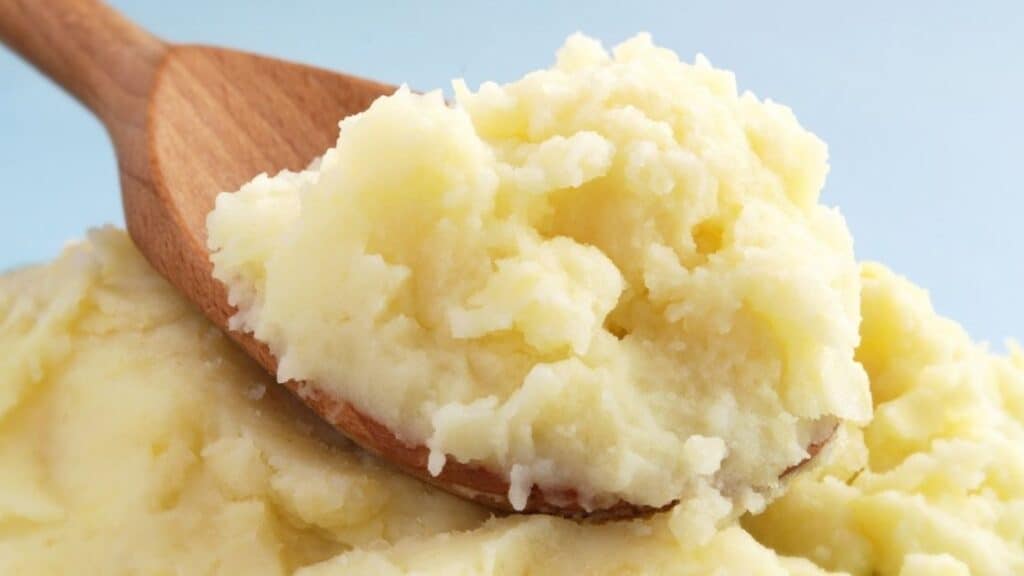 Frozen foods last longer than foods stored in the fridge.

However, certain foods also last longer than others.

Baked potatoes tend to go bad after about a week in the fridge, but how long do they last in the freezer?

As a general rule, baked potatoes last 3 to 6 months in the freezer.

Any longer than that and they begin to lose flavor and texture.

Like all foods they can get freezer burn, therefore they should be kept in the freezer in a way that they won’t make contact with air.

This can be done by vacuum-sealing them in bags and making sure the potatoes are as dry as possible before freezing.

Or, if some oil was used during the baking process.

If they are a bit moist because of that they can be dabbed with a paper towel.

Or, you can wipe the oil off with a new clean dishcloth.

The liquid on the surface seeps into the potatoes which get drawn on when they freeze, leaving them a bit dry after being defrosted.

For shorter storage for around a month or less, they can be wrapped in a plastic bag where an effort has been made to remove as much air as possible.

Many people wonder what the best way is to cook potatoes to get the most nutrients.

Whether it’s better to steam, boil, or bake potatoes.

I compared the nutritional value of these types side by side in this article that explains if it’s better to steam potatoes.

How to Reheat Frozen Baked Potatoes in Microwave? 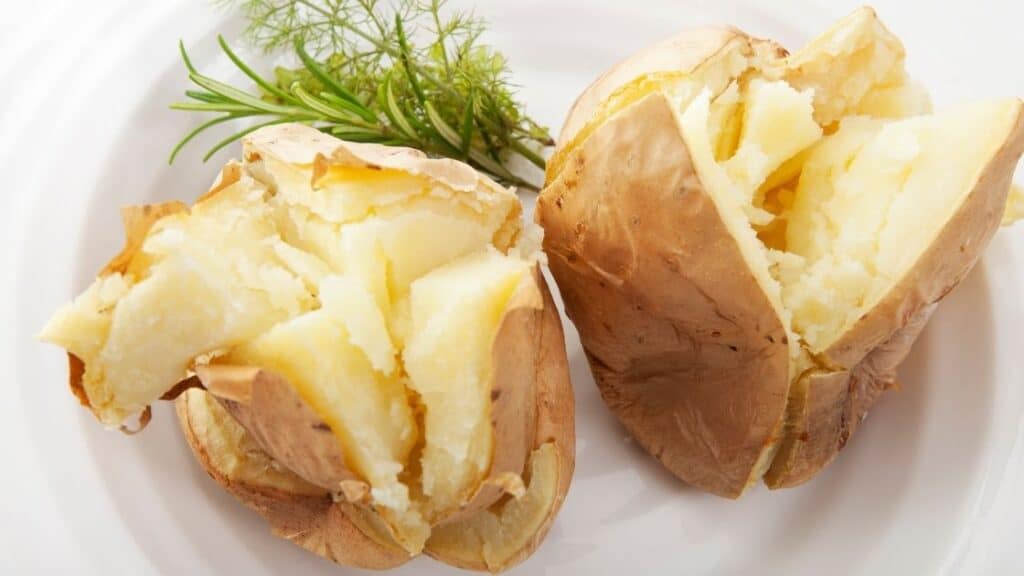 Potatoes are quite dense and depending on how small you cut them they can take a bit of time to cook.

Frozen foods generally need to be defrosted before being warmed up so that the center isn’t still frozen.

So, I thought I’d cover how to reheat frozen baked potatoes, and specifically in the microwave.

Defrost them on the defrost setting for vegetables.

It will beep to tell you to turn the food over.

If not, turn each baked potato upside down every 3 minutes.

Then do the same thing but on the cook cycle.

The cook and defrost time varies by the amount being reheated, explained below.

Each microwave is slightly different, however on average on the defrost setting do an initial 3 minutes, then turn them over.

After that, cook them for an extra 1 minute for each half a cup of baked potatoes.

This is the same as about 2 to 3 average-sized pieces of baked potato, or typical serving size.

Here’s a table that shows the defrost time:

Turning the potatoes over ensures they cook evenly. And it stops the bottom from becoming steamed and soggy. 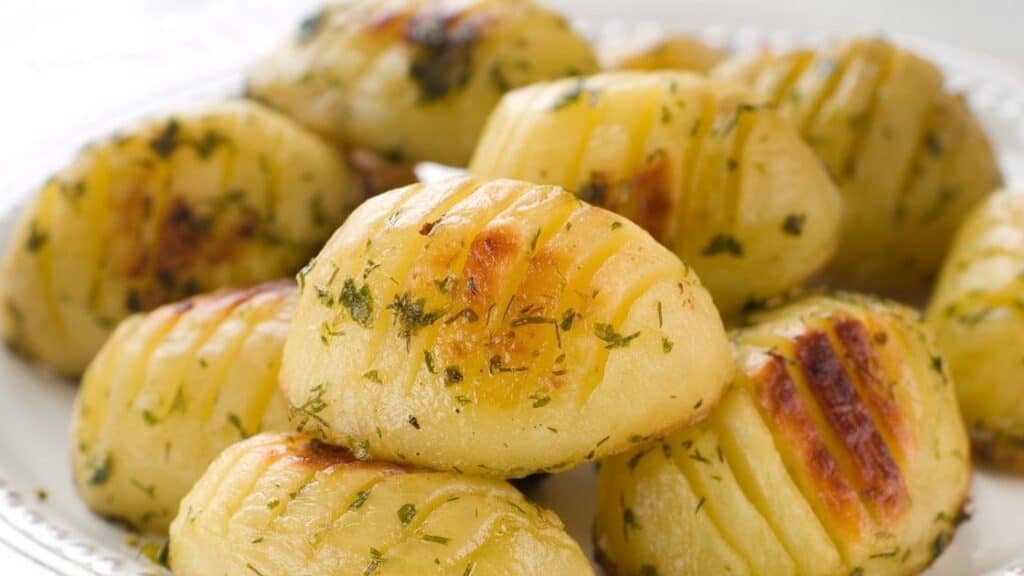 Baking potatoes is one of the most delicious ways to cook them, especially with other vegetables.

However, is it a good way to prepare them to be frozen?

Overall, baked potatoes freeze well but ideally they should be mashed first.

When baked potatoes are frozen they develop a grainy texture.

Most people report the best way to freeze them is to mash them without adding butter, salt, pepper, and other ingredients used to make mashed potatoes.

The flavor is better if you add the additional ingredients in mashed potatoes after you defrost and reheat them.

Frozen mashed baked potatoes can be defrosted by leaving them in a bowl on the counter overnight.

This turns them into refrigerated mashed potatoes.

Then they can be reheated in the microwave, in the oven, or in a bain-marie.

I explained step by step each of these reheating methods in this article about how to reheat mashed potatoes.

According to famous chef Gordon Ramsey, cooking extra-baked potatoes is always a good idea, as they are very versatile to use in the next day or two.

Whether it’s a good idea to freeze uncooked potatoes

Freezing uncooked potatoes is ok, but they do develop a grainy texture much like freezing baked potatoes.

You get the best flavor and texture by cooking them into mashed potatoes first without adding any of the other ingredients used to make mashed potatoes.

Some people say that blanching them first is the way to go, whereas others say not to as it’s not that good.

However, frozen fries from large companies make them partly cook them before freezing them.