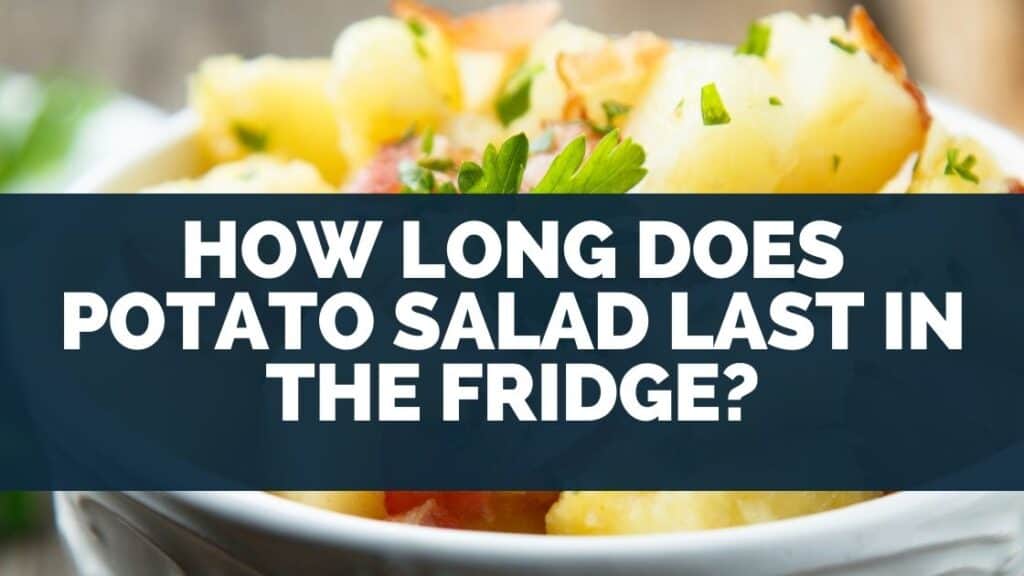 Potatoes are the most popular vegetable in the United States because of the popularity of french fries.

While deep-fried potatoes aren’t the healthiest option, one of the most beneficial ways of eating potatoes is by making a salad, of course!

As potato salads can last up to five days in the refrigerator, you’ll save heaps of time and effort by making up a big batch and portioning the rest out for the next few days.

In addition to being high in fiber and carbohydrates, potatoes are an excellent source of nutrition with many essential vitamins and minerals.

According to the USDA, one medium baked potato contains:

While countless potato salad recipes are available on the web, here are some tricks to get you started. 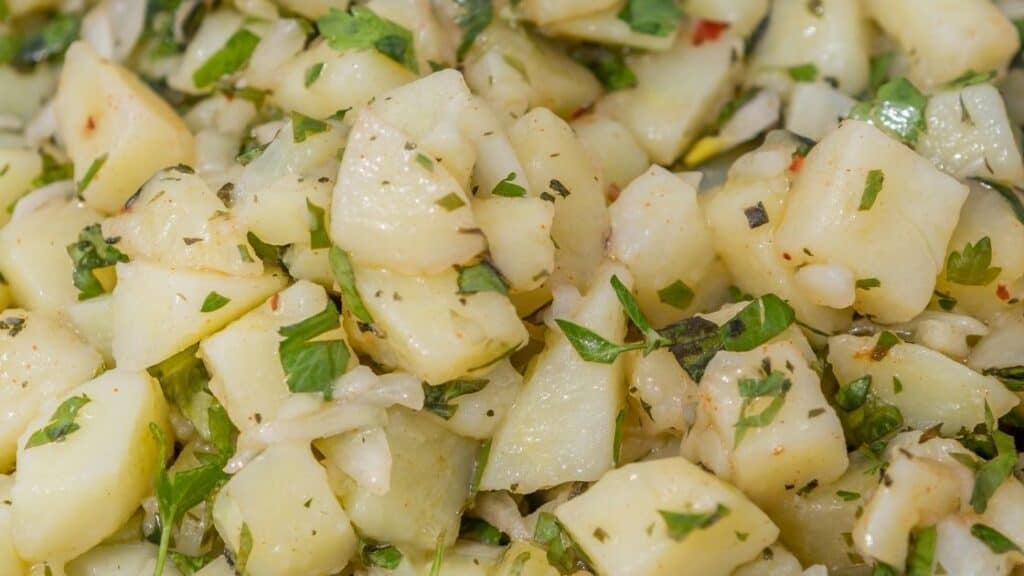 While typical potato salads can last up to five days in the refrigerator, other ingredients might cause it to spoil faster, like dairy or raw onions.

The salad will have a sour, strange smell or visible signs of spoilage.

Spoilt food should not be eaten and should be thrown out immediately.

The FDA recommends that food left out for more than two hours be discarded.

Bacteria grow to dangerous levels after two hours in a range of temperatures called the “danger zone” of 40 °°F and 140 °F.

The amount of bacteria in the food can double in as little as 20 minutes in this range.

In temperatures of over 90°F, food can only be left out an hour before discarding is recommended.

If you’re bringing a potato salad to a gathering or a potluck, pack a cooler with plenty of ice or frozen gel packs for transportation, or consume the dish between one or two hours.

Food spoilage is a natural process that is affected by:

In addition to bacteria, many other pathogenic microorganisms like yeasts and mold can cause food-borne sickness.

Pathogenic microorganisms can grow in foods without changing the odor, smell, taste, or appearance.

In addition, enzymes are substances naturally found in foods like fruits or vegetables responsible for giving the food its texture, flavor, and color.

Enzymes are responsible for the ripening process and can change the taste of the food over time.

At times, it is impossible to know whether a food is contaminated purely by smell or taste without microbiological testing.

Food poisoning is an unpleasant, painful, and potentially severe illness that is not worth a bowl of potato salad.

When in doubt, throw it out!

How Do You Know If Potato Salad Is Bad? 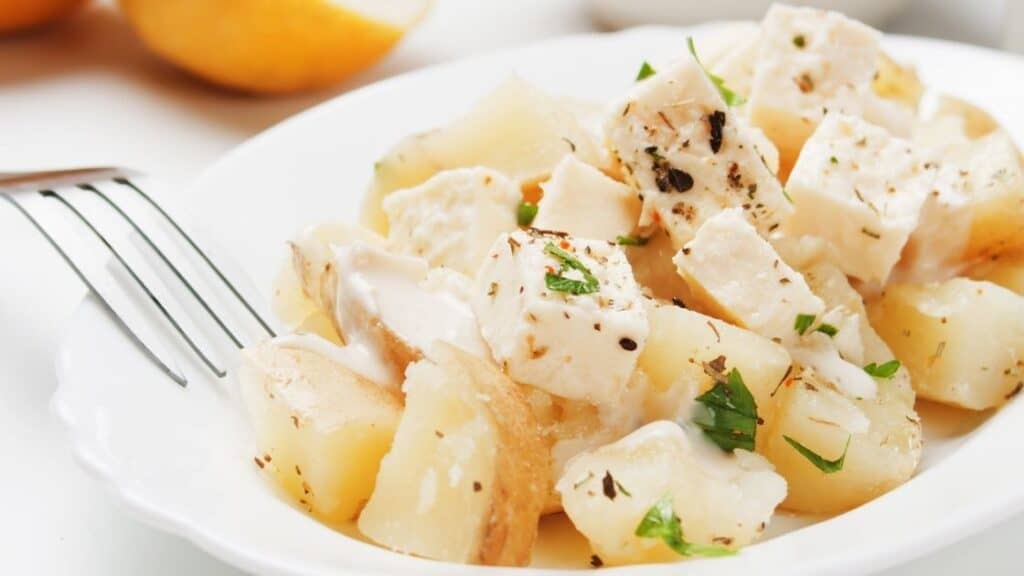 While the average potato salad lasts up to five days when refrigerated, other ingredients might contribute to quicker spoilage, like raw onions or dairy.

If the potato salad has a strange, sour odor or visible signs of mold, it should be discarded immediately.

If the potato salad looks and smells fine, take a tentative bite to check its taste.

Any taste out of the ordinary should be thrown away.

Bacteria grow to dangerous levels after being left out for one and two hours, depending on temperature.

The FDA recommends chucking food after two hours being left out and one hour if temperatures are above 90°F.

This is because bacteria proliferate quicker in warm climates, doubling every 20 minutes or so.

One of the most common causes of gastrointestinal upsets is the Staphylococcal bacteria, or “staph”.

The staph bacteria causes about 250,000 illnesses each year in the US. This bacteria is commonly found in:

It usually develops in these foods when left out at room temperature for too long.

Symptoms of a staph infection include:

While not severe in healthy people, streptococcus infections can be dangerous for the elderly or people with preexisting conditions.

Symptoms usually begin between one to three days after contamination and can last around four days.

The bacteria typically live in both human and animal intestines and are purged through feces.

Salmonella infections are common diseases that target the digestive system.

The incubation period ranges from several hours to two days.

Most salmonella infections can be classified as stomach flu (gastroenteritis).

Possible signs and symptoms include:

While Salmonella poisoning is usually not life-threatening, vulnerable people like babies, the elderly, and people with preexisting conditions might have severe symptoms that can develop into complications.

If you suspect you have a food-borne bacterial infection, always check with your medical practitioner immediately. 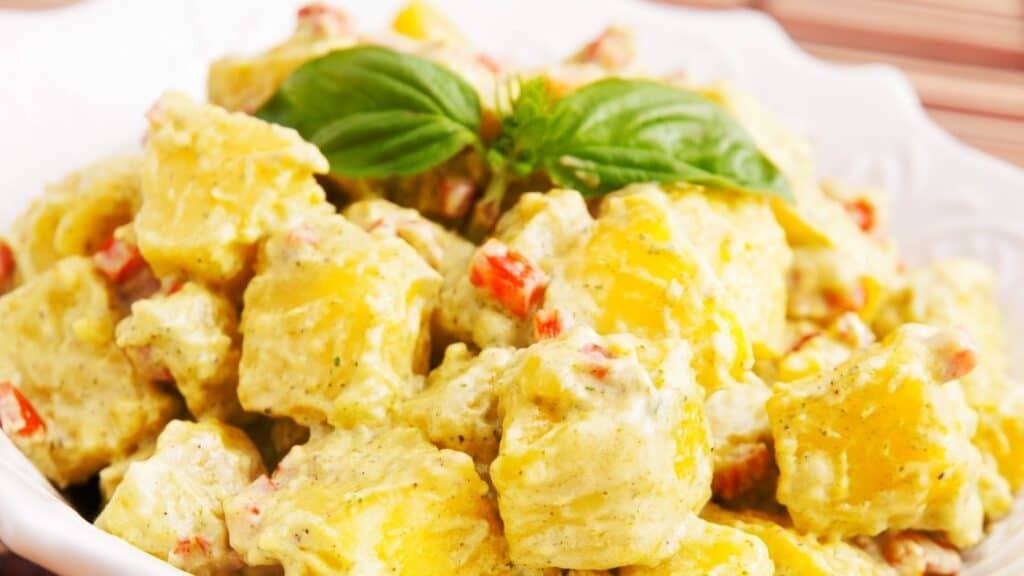 After smelling and checking your leftover potato salad, you take a gingerly bite to taste, and…..the potato salad tastes fizzy! Chuck it immediately.

The bacteria has gotten into the food and is starting to ferment.

Whatever doesn’t taste normal should be discarded.

While most bacteria thrive in temperatures above 40°F, they can still grow in cooler temperatures, albeit loads slower.

Refrigerated potato salad can last up to five days, after which it should be discarded.

However, even before five days, other factors can affect how fast the food spoils, like the ingredients used, how it was prepared, and the level of contamination it might already have.

For example, say you prepared a potato salad for a picnic.

You transport the salad, leave it out for two or three hours during the gathering, then pack the rest home to refrigerate and use the next day.

The FDA recommends that food left out for more than two hours be discarded, and only one hour if the temperatures are above 90°F.

This is because the levels of bacteria get dangerous once left out for over two hours.

Bacteria can double every 20 minutes, accelerating the spread once the two-hour mark is reached.

Then, it goes into a fridge, where some bacteria might stop growing, but others continue to grow, albeit very slowly.

Eating that potato salad the next day or worse, several days after, would be a terrible idea.

Can Potato Salad Give You Food Poisoning? 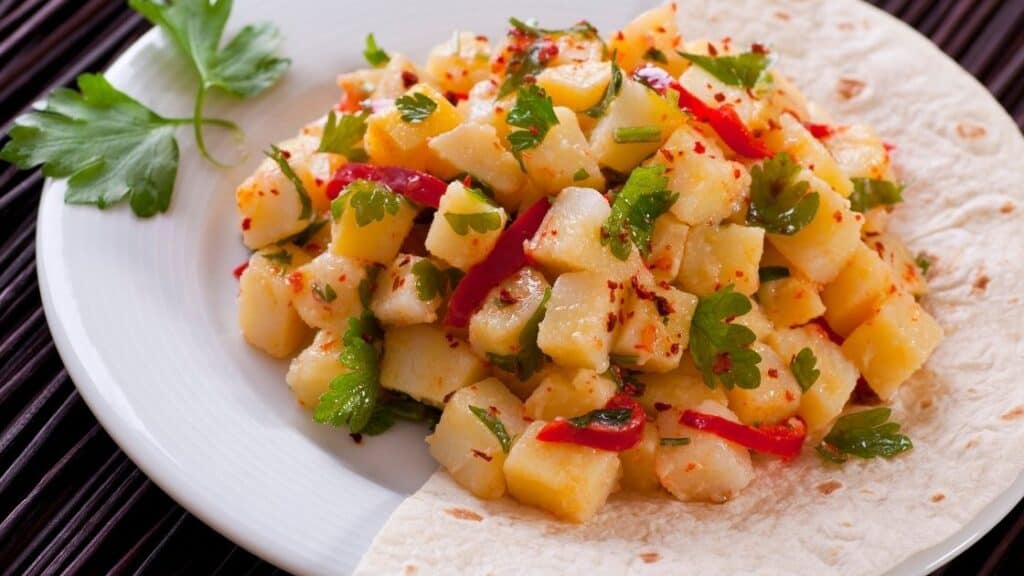 Potato salads are common culprits of food poisoning illnesses because various bacteria can invade and multiply quickly if the salad is left out for too long or stored incorrectly.

They are considered a Time/Temperature Control for Safety food (TCS).

TCS foods are prone to bacteria because they contain protein, are moist, and have a near-neutral pH.

All these factors make the food an excellent target for microorganisms like yeast, mold, and bacteria, which then go on to produce toxins.

Botulism is a severe and potentially dangerous type of food poisoning caused by a bacterium called Clostridium botulinum.

This bacteria grows in the absence of oxygen. In addition, it forms spores that are heat resistant and can germinate, producing the toxin.

If your potato salad is slightly contaminated with bacteria and then placed in an airtight container, dangerous levels of the toxin could develop.

Symptoms of botulism include:

All symptoms are a result of muscle paralysis that the toxin causes.

If untreated, the disease might spread and affect muscles in the lungs, organs, arms, and legs.

Botulism is an extremely dangerous disease and can have severe consequences if left untreated.

Symptoms begin between 18 and 36 hours after eating contaminated food.

If you suspect yourself or anyone else of botulism, go straight to your doctor or a hospital’s emergency room.