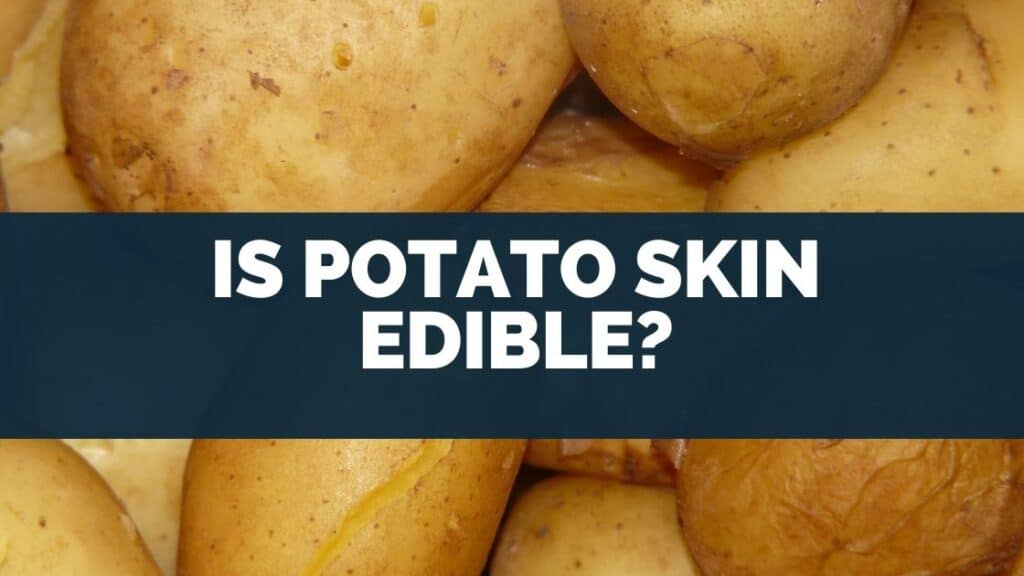 While citrus fruits are famed for their high vitamin C content, potato skins are underrated powerhouses of phytochemicals, vitamin B, and other nutrients that protect the body from serious illnesses.

The skin is likely to have traces of mud, soil, and dirt, so scrub and clean the peel thoroughly, removing all the dirt and sprouts while washing under warm water.

Potato skins have no fat, cholesterol, or sodium.

It contains a surprising amount of fiber, almost double the fiber contained in the actual potato.

One baked potato skin contains about 115 calories, 2.5g of protein, 27g of carbohydrates, and 4.6g of fiber.

In contrast, a whole medium potato contains about 160 calories.

In addition, potato skins are a rich source of phytochemicals, compounds found in fruits, vegetables, grains, and other plants.

These phytochemicals have been linked to protecting cellular damage that could lead to cancer.

Like other plant-based foods, potato skins contain loads of fiber, a type of carbohydrate that the body cannot digest.

It provides bulk to the stool and softens it, reducing the risk of constipation.

These gut bacteria are responsible for defending the gut against invading harmful bacteria, maintaining balance, and ensuring optimal digestive health.

Go to top
Table Of Contents show
1 Why Should You Not Eat Potato Skins?
2 Is Potato Skin High In Calories?
3 Are Potato Skins Fattening?
4 Is The Skin Of The Potato Good For You?

Why Should You Not Eat Potato Skins? 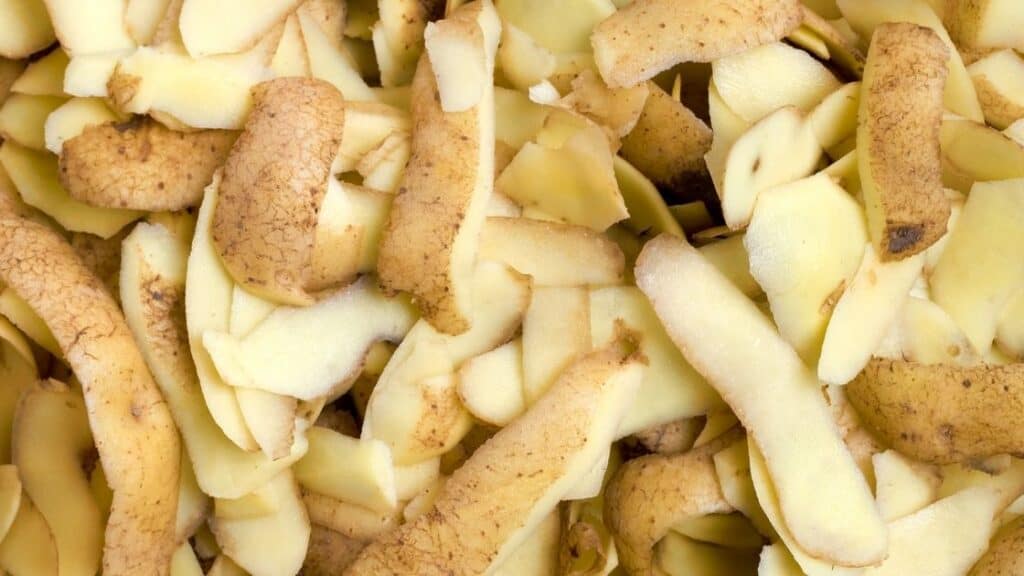 The toxicity of potato skins is only present in potatoes whose skins have turned green.

Green potatoes are toxic because of the presence of solanine.

Potatoes can turn green after exposure to UV rays.

When a potato gets exposed to excessive sunlight, the skin starts producing solanine, a harmful toxin that most plants have to deter predators and insects.

Solanine is a glycoalkaloid poison found in the nightshade family.

It can show up in potatoes stored in light because of chlorophyll. Potatoes should be stored in a cool, dark place.

The more a plant is exposed to sunlight, the more solanine it produces, and the stronger it gets to repel insects and disease.

Solanine can appear in the sprouts, leaves, stems, and edible tubers, causing the potato to taste bitter.

Never eat a potato with any green in it.

Is Potato Skin High In Calories? 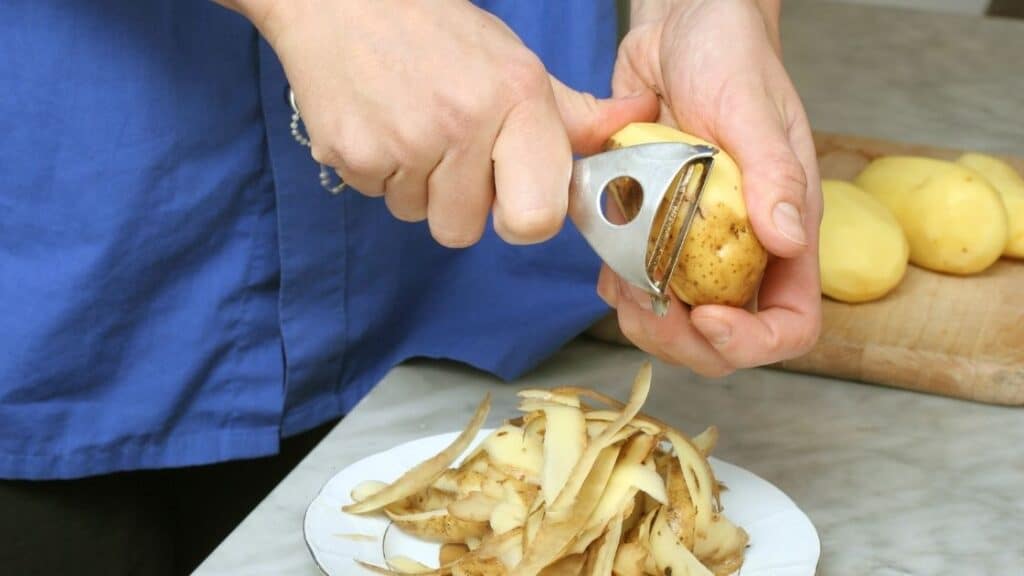 A baked potato skin is 8% protein and 92% carbohydrates, containing about 115 calories, while the potato’s flesh has 145.

The caloric content of potato skins depends on the way it is prepared.

The calories from potato skins come from carbohydrates and proteins.

Potatoes and their skins do not contain any fat, sodium, or cholesterol.

Each gram of fat yields nine calories, while each gram of carbohydrate or protein gives four.

A calorie is a unit of measurement referring to the amount of energy your body releases when it digests and absorbs food.

The more calories you consume, the more energy it provides to the body.

If you eat more calories than you are burning off as energy, your body will store the extra calories as fat.

Vice versa, if you consume fewer calories than you are spending, your body will start burning fat stores for energy.

Potato skins are excellent as part of a weight-loss diet.

They are rich in fiber, which moves slowly through the digestive system and lets you feel fuller for longer.

In addition, they are high in carbohydrates, giving you loads of energy without the fats.

There are several varieties of potatoes.

These are the calories in 100g of the most common potato skins. 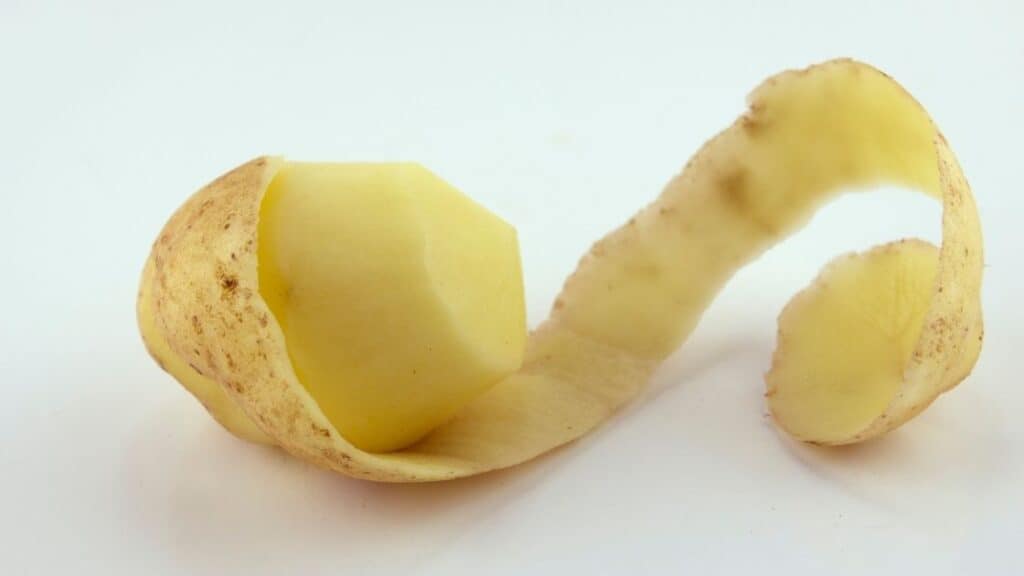 Potato skins are not fattening.

They have zero fat; their calories come from carbohydrates and proteins.

A baked potato skin has 115 calories found in 27g of carbohydrates and 2.5g of protein.

Calories are found primarily in fat, carbohydrates, and protein.

As potato skins contain no fat, most of the calories are found in the high carbohydrate content of potatoes.

Carbohydrates are made out of starches, dietary fibers, and sugars.

They are an essential food group and should be part of any diet.

One of the main ways that the body obtains fuel and energy is, carbohydrates which contain carbon, hydrogen, and oxygen.

The recommended daily carbohydrate intake is about 135 grams depending on weight, lifestyle, metabolism, and general health.

Carbohydrates should make up 45% to 65% of total calories.

Is The Skin Of The Potato Good For You? 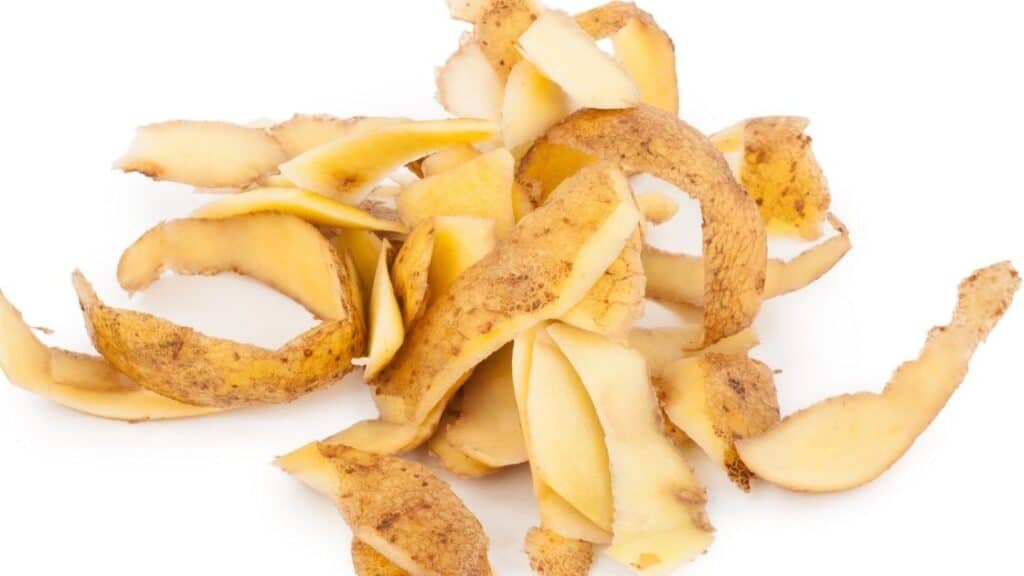 Potato skins are a highly nutritious source of phytochemicals, fiber, and carbohydrates.

In addition, they are jam-packed with other nutrients like iron, vitamin C, folate, B vitamins, magnesium, and manganese.

They also contain no fat, cholesterol, or sodium.

Potatoes and their skins are excellent sources of non-fat carbohydrates and dietary fiber.

Potato skins have been linked to several health benefits, including:

The fiber content of the potato skin helps in maintaining good bowel movements.

In addition, potato skins contain cellulose, a dietary fiber known to help with gastrointestinal problems such as irritable bowel syndrome.

Fiber is necessary to feed the good gut bacteria in your colon called probiotics.

These tiny microscopic bacteria are responsible for keeping a balanced gut, boosting the immune system, and fighting off harmful invading bacteria.

Potato skins contain minerals essential for maintaining the strength and health of our bones, such as phosphorus, calcium, magnesium, and potassium.

According to this survey by the National Health and Nutrition Examination Survey (NHANES), consuming moderate amounts of minerals such as calcium and phosphorus can reduce the chances of osteoporosis by about 45%.

Calcium also enables the blood to clot, muscles to contract and contributes to heart health. 99% of the calcium in our bodies is stored in our bones and teeth.

When there are more free radicals than antioxidants, it throws our body out of whack and can result in a condition called oxidative stress.

Prolonged periods of oxidative stress can lead to grave illnesses like heart disease and cancer.

Flavonoids are phytonutrients known for their antioxidant and anti-inflammatory properties.

According to NIH, potato skins contain a flavonoid known as quercetin.

Quercetin is also known to help with bronchial asthma and reduce the risk of severe anaphylactic reactions caused by peanuts or other allergens.

Quercetin, while most commonly found in anti-allergy drugs, is also known to treat or prevent serious conditions like:

Potato skins contain loads of minerals that contribute to heart health, like potassium, magnesium, and calcium.

According to Harvard Medical School, potassium is beneficial in controlling blood pressure by relaxing blood vessels.

It has also been linked to reducing the risk of irregular heartbeats by increasing the efficiency of electrical signals to the heart.

In 2015, several experiments were performed by the Hypertension Group with 3048 participants.

The results indicate that an increased intake of calcium led to lower blood pressure.

Potato skins are high in fiber and starchy carbohydrates but have zero fat.

As starch moves through the digestive system, it releases fatty acids that promote fat burning.

These acids preserve muscle mass, increasing your metabolism, and might help you lose weight.

In addition, fiber moves slowly through the digestive system and helps you feel fuller for longer, contributing to appetite management.