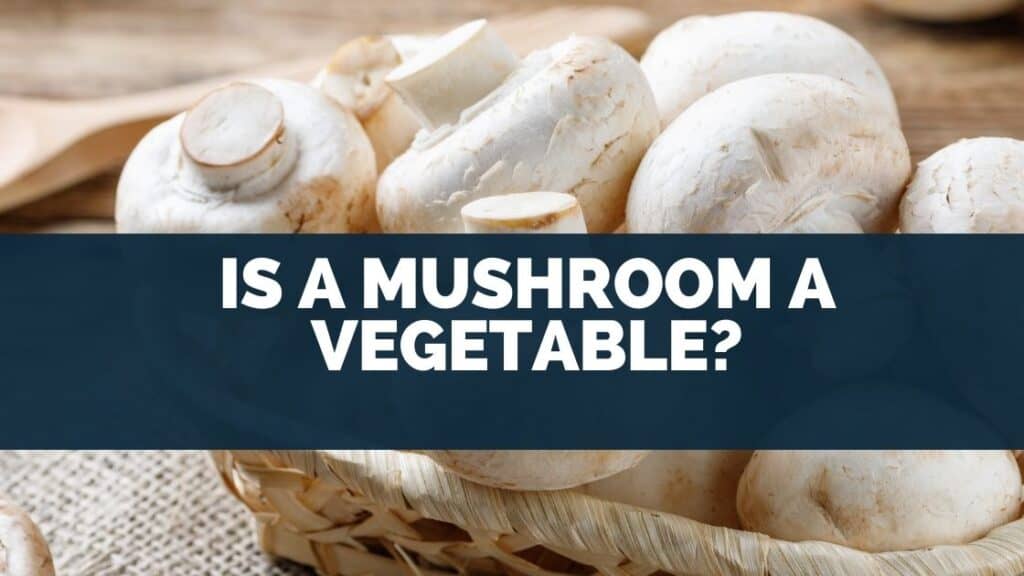 Mushrooms are unique in the world — they are neither plants nor animals.

Not only that, but they hold quite a bit of mystery for many people.

Mushrooms are not vegetables, and they are not meat either.

They are classified as fungus.

Not all varieties are edible — in fact, some are poisonous — but many are edible and come with a variety of potential health benefits.

Go to top
Table Of Contents show
1 What food group are mushrooms in?
2 Are mushrooms legumes?
3 Can a pure vegetarian eat mushrooms?
4 What are the health benefits of mushrooms?

What food group are mushrooms in? 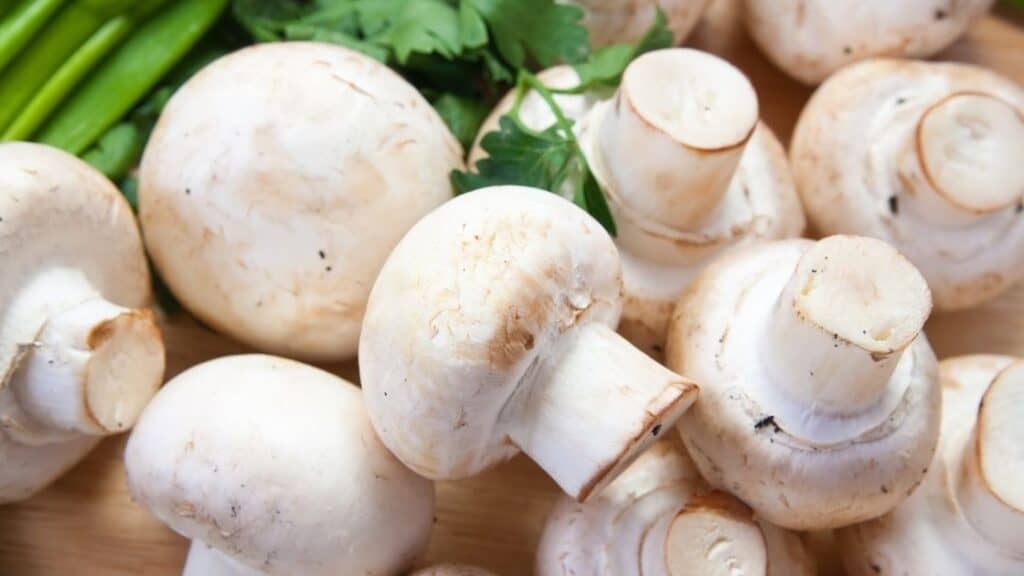 Mushrooms are a type of fungus, along with organisms such as yeast and mold.

As such, mushrooms are distinct from both plants and animals.

Many types of mushrooms are edible and have numerous health benefits.

For centuries of botanical study, mushrooms were mistakenly classified as plants.

It’s easy to make this mistake — many mushrooms grow in the ground, and their fruiting bodies look like small trees.

It wasn’t until 1969 that fungi were separated into their own kingdom, distinct from plants, animals, algae, and bacteria.

Mushrooms, yeasts, and molds all belong to the fungi kingdom.

Interestingly, fungi are evolutionarily more closely related to the animal kingdom than to the plant kingdom.

The main difference between mushrooms and vegetables is that while plants use photosynthesis to process their own food, mushrooms absorb nutrients from decaying organisms.

This is why you often see mushrooms in the forest.

As John Staughton remarks in this article on mushrooms, “when a tree falls, or an animal dies, fungi are typically the first on the scene to begin the natural process of decomposition.” 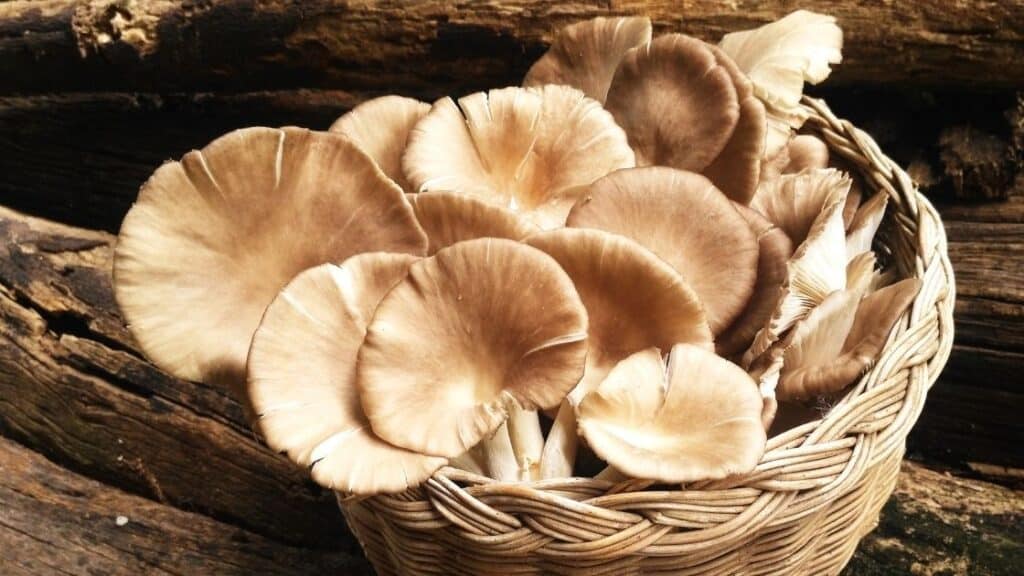 No, mushrooms are not legumes.

While legumes are the seeds of specific types of plants, mushrooms are a fungus and not a plant at all, even though they often grow in the ground.

Legumes are the fruits or seeds of plants in the families Fabaceae or Leguminosae.

They are not even in the same kingdom as mushrooms, which are classified as a fungus.

Despite the fact that mushrooms and legumes are completely distinct from one another, they do share some similarities.

Generally speaking, they both have a higher protein content than most vegetables, and they both have compounds that function as a prebiotic to feed our gut bacteria.

Legumes are often high in a compound called galacto-oligosaccaride, which is a type of starch. Mushrooms have various types of polysaccharides, such as beta-glucans and chitin, which also feed gut bacteria.

Can a pure vegetarian eat mushrooms? 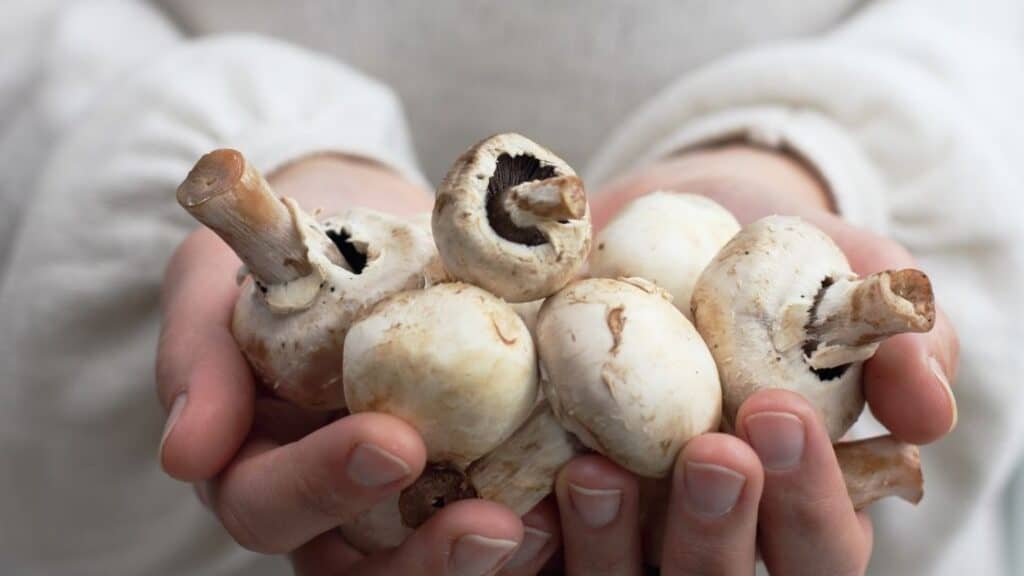 Mushrooms are classified neither as a plant nor as an animal — they are in a class all by themselves.

Vegetarians are at a much higher risk of vitamin B12 deficiency since most B12 comes from animal foods.

B12 deficiency can result in a higher risk of depression and mental health issues and is especially dangerous for children.

For this reason, many people recommend that vegetarians and vegans eat large amounts of mushrooms and algae since these foods contain more vitamin B12 than most plant-based foods.

For example, 5 dried shiitake mushrooms contain 1mg of B12 — almost half of the recommended RDA.

However, mushrooms and algae are not sufficient to prevent vitamin B12 deficiency in vegans and vegetarians.

The type of B12 found in these foods is actually a B12 analog known as “pseudo-vitamin B12” and is not easily processed by the human body.

This is why the most sensible recommendation for people who are unwilling to eat animal foods is to either supplement with B vitamins or to eat fortified foods, like nutritional yeast.

Vegans and vegetarians and omnivores, too, should definitely feel free to eat as many mushrooms as they like — just don’t look to mushrooms to ward off vitamin B12 deficiency!

What are the health benefits of mushrooms? 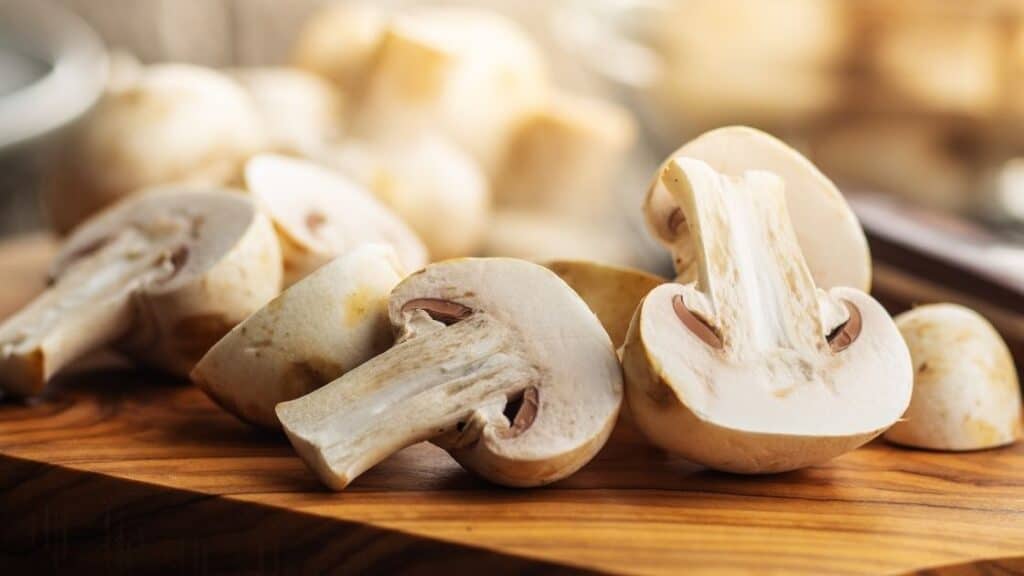 Mushrooms have many potential health benefits.

They are nutrient-dense, containing decent amounts of vitamin D, selenium, and protein.

They are anti-inflammatory and protect against oxidative stress.

Many mushrooms have unique compounds that are potentially protective against neurodegenerative diseases.

Mushrooms are unique in that they produce vitamin D when exposed to sunlight or other sources of UV light — some people place their mushrooms outside or under a UV tanning lamp in order to boost their vitamin D levels.

Eating mushrooms is still no substitute for getting yourself outside to spend time in the sun, but it can serve as a bolster to your vitamin D levels if you consume mushrooms regularly.

Vitamin D is not the only nutrient found in mushrooms.

Take a look at the vitamin and mineral content of 50 grams of raw generic mushrooms in the images below: 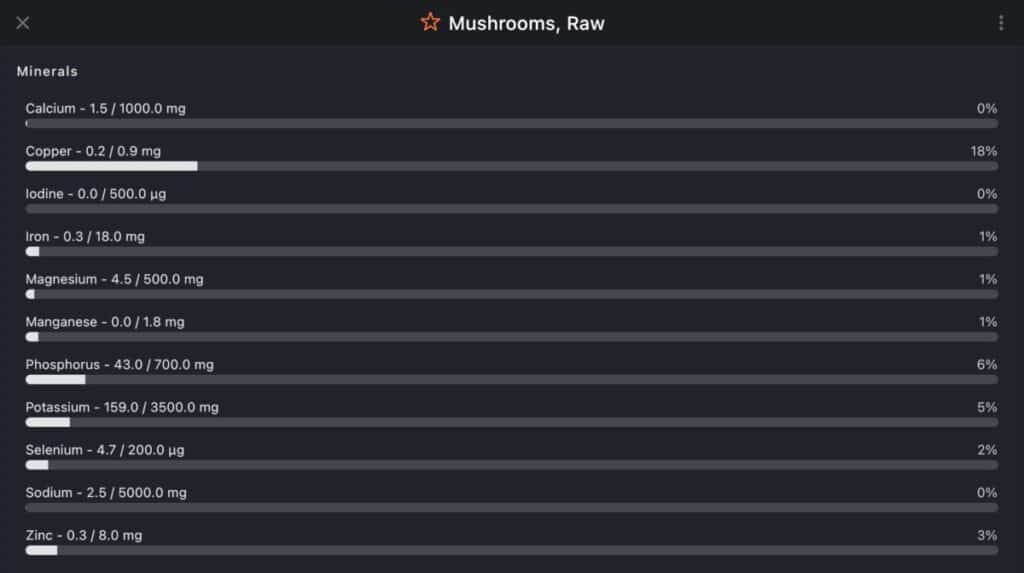 Amazingly, you get all of these nutrients for only about 11 calories! Mushrooms are definitely nutrient-dense food.

Even if you’re trying to lose weight, you can consume copious amounts of mushrooms and not worry about going over your calorie target for the day.

Moreover, eating nutrient-dense foods like mushrooms (as part of a sensible diet) can help increase satiety, since you can eat a higher volume of these foods to fill your stomach without consuming too many calories.

They are anti-inflammatory and potentially help bolster the body’s innate immune response.

They have therapeutic potential for neurodegenerative diseases and function as an antioxidant in the body.

Incredibly, all of the above is true of everyday mushrooms you can find in any grocery store.

But there is another class of mushrooms that is even more remarkable, many of which have been used for centuries in traditional medicine.

An example is the Chaga mushroom, which grows on birch trees in the northern hemisphere.

Chaga is renowned for its anti-inflammatory and antioxidant properties, which makes it potentially beneficial to combat signs of aging.

Moreover, Chaga is so potent that researchers are taking seriously the possibility that it could slow the growth of cancer cells.

Another famous medicinal mushroom is known as the lion’s mane.

Lion’s mane mushroom is large, fluffy, and white — it truly does resemble a lion’s mane.

It is known for its neuroprotective and nootropic properties, and may even fight the impacts of dementia.

One final type of mushroom worthy of mention is the reishi mushroom.

It grows in hot and humid environments in Asia and is used widely in Traditional Chinese Medicine.

It supports the immune system, promoting increased activity of natural killer cells in the body.

It has also been used to reduce fatigue and relieve mild symptoms of depression.