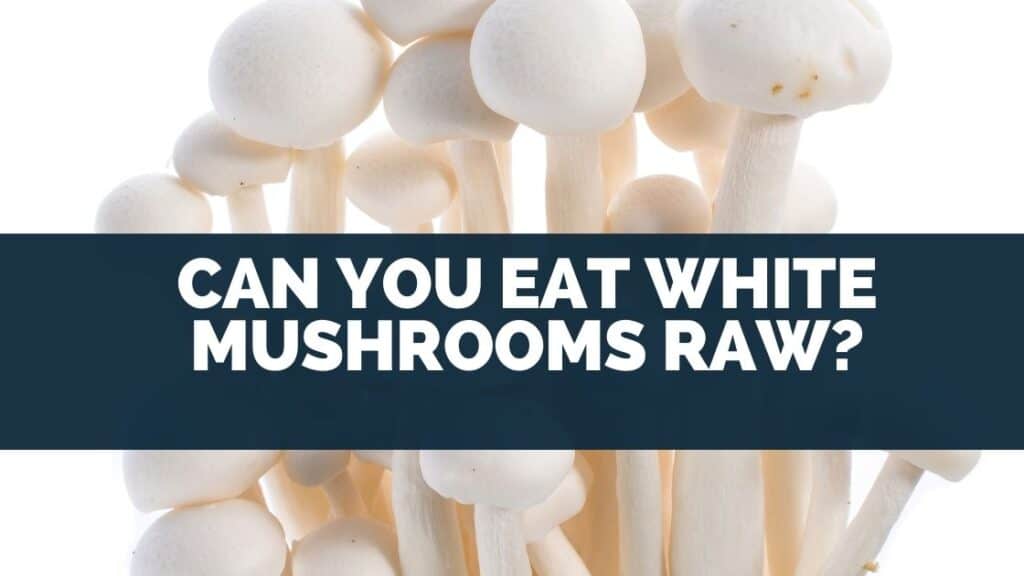 The cap and the stem are edible and can be eaten both cooked and raw.

It may be best to avoid eating raw mushrooms if you have a history of digestive problems as they can cause some digestive distress when consumed raw.

Some people recommend avoiding eating raw mushrooms as they may contain a toxin called agaritine.

This naturally-occurring toxin is deactivated by heat so many people suggest cooking mushrooms before consuming them.

However, it has been suggested that agaritine is also broken down when refrigerated, dried, or even just stored.

Even if you consume them straight from the supermarket, they’ll have been refrigerated or stored in cool and dry conditions and are safe to eat raw.

You should never eat mushrooms picked from the wild as it can be very difficult to work out if they’re poisonous or not.

Another reason some recommend not eating mushrooms raw is because of the chitin contained in the mushroom cell walls.

This chitin can cause digestive distress for some, especially those with a previous record of digestive issues.

If this is the case, you may want to stay on the safer side and consume them cooked.

Some also suggest that cooking mushrooms help to release the nutrients in the mushrooms making them more bioavailable to the body.

Are raw white mushrooms good for you? 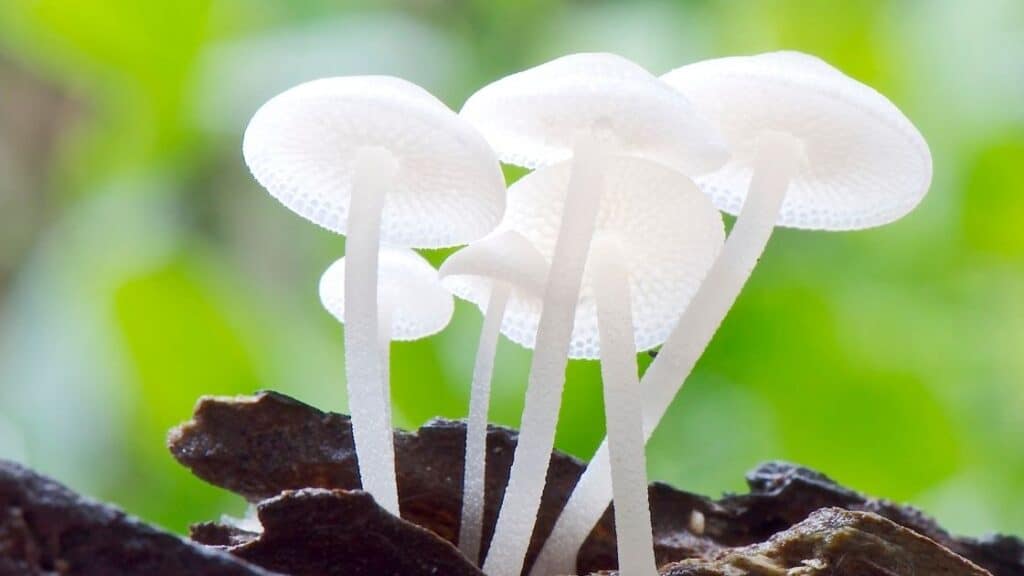 Yes, white mushrooms are good for you.

They are a great source of vitamins D and B12, vital for overall health.

They also contain antioxidants that aid the body in fighting oxidative stress.

Like most mushrooms, white mushrooms are low in calories but contain tons of nutrients.

The body then turns this D2 into vitamin D, which is important for overall health.

Being deficient in vitamin D can cause fatigue and bone issues.

White mushrooms are also a good source of vitamin B12, this vitamin is often found in meat sources so consuming mushrooms make it a good substitute for those eating a plant-based diet.

Mushrooms also contain a decent amount of protein making another important food especially for those on a plant-based diet.

Oxidative stress can lead to various diseases such as heart disease.

The beta-glucan found in white mushrooms is a soluble fiber that can help lower blood cholesterol levels.

It does this as it can form a gel type of substance which then prevents cholesterol from being absorbed by trapping them, 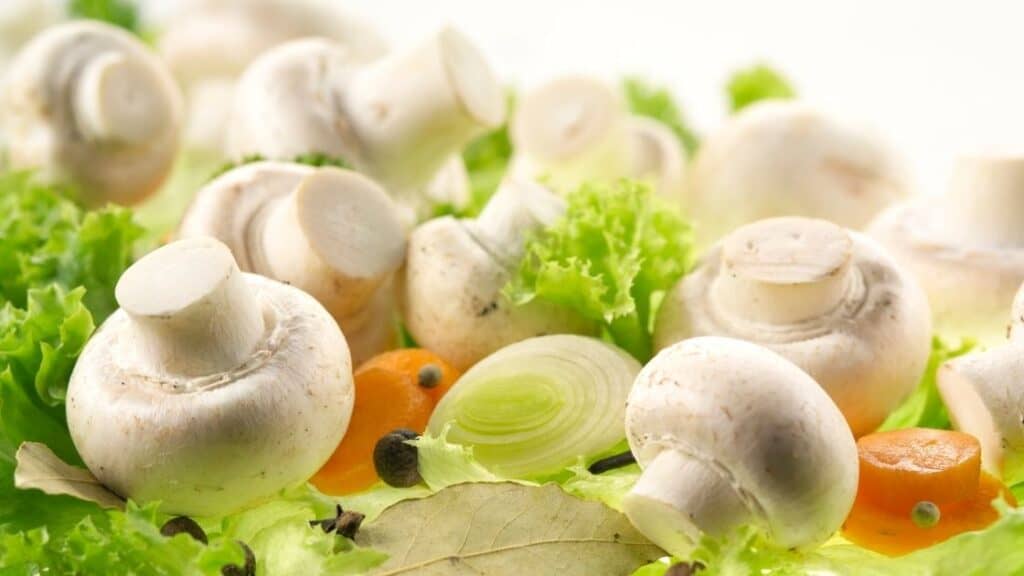 White mushrooms are technically healthier when consumed raw as protein and some vitamin and mineral content decreases when cooked.

However, you’ll likely consume double the amount of mushrooms when cooked so there isn’t a huge difference in nutritional intake.

When white mushrooms are cooked, they lose water and shrink in size.

However, because they’re much smaller you’re more likely to consume more.

When mushrooms are cooked, they can lose up to half of their nutrients, especially the water-soluble vitamins.

So, it may be best to compare the number of cooked and raw mushrooms.

Six, raw white mushrooms have 24 calories and 1.1 g of fiber, and when cooked this calorie content is actually reduced to 20 and the fiber increases 1.6 g.

The same amount of mushrooms has 3.3 g of protein, raw, and when cooked they lose around half of this and have only 1.5 g of protein.

The vitamin C content actually increases when cooked however most of the other vitamins present do decrease when cooked such as vitamin D, which is halved when cooked.

Mushrooms lose a large number of B vitamins when cooked.

Boiling mushrooms reduce the amount of magnesium, potassium, sodium, and phosphorus however other minerals such as calcium, iron, and zinc actually increase.

Overall, nutritionally raw mushrooms have a better nutritional profile compared to cooked mushrooms however this can vary as vitamin C and some minerals increase when cooked whereas protein and vitamin D decreases by about half.

It can also be difficult to digest and consume a decent amount of raw mushrooms as the chitin contained in mushroom cell walls can cause digestive distress.

Raw mushrooms are more difficult to chew when compared to cooked mushrooms so it’s usually much easier to consume them cooked.

One reason many choose cooked mushrooms over raw is that the cooking process helps to kill off any bacteria or spores.

Eating them raw could leave you open to risk however this is not highly likely and as long as you get them from a good source, and store them well, you should be safe to eat them raw.

Is it OK to eat raw mushrooms in a salad? 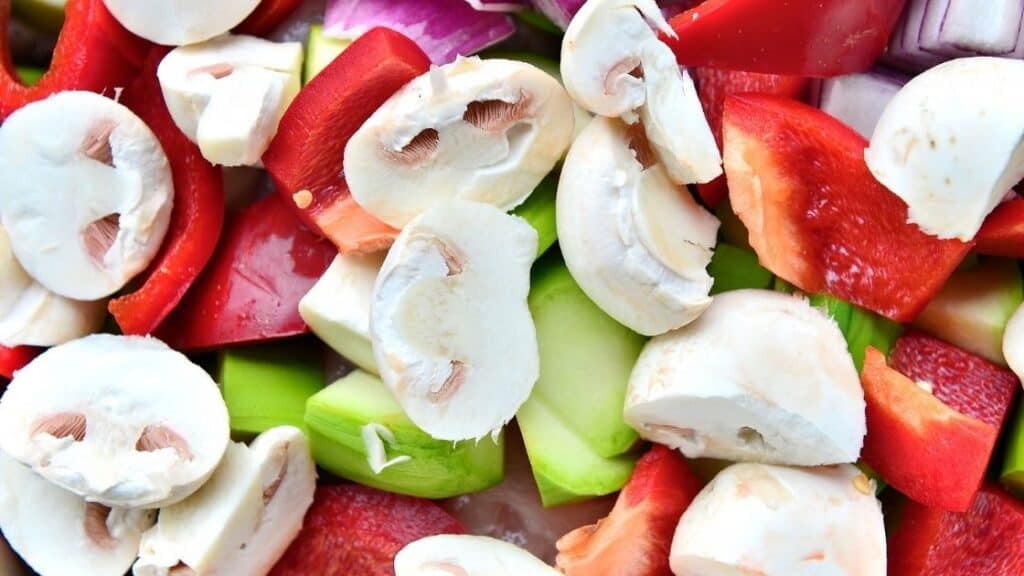 Yes, it’s safe to eat mushrooms raw in a salad.

Some mushrooms are much tougher to eat raw such as oyster and reishi mushrooms but white mushrooms can easily be consumed raw.

Avoid eating raw mushrooms that are freshly picked, as long as the mushrooms have been stored or refrigerated, they’re safe to eat raw.

Some people suggest not eating raw mushrooms because of a naturally occurring toxin called agaritine.

This means that there are some mixed opinions around whether or not raw mushrooms can be consumed.

When mushrooms are stored or refrigerated, the agaritine levels are significantly reduced.

Unless you plan to go foraging, you’ll certainly be safe.

Cooking mushrooms has often been suggested as the only method to reduce the agaritine levels however because just storing or refrigerating raw mushrooms decreases levels, you can consume raw mushrooms.

As long as your mushrooms are bought from the supermarket, you eat them at any time and in any form.

If you are growing your own, you want to be much more careful and place them in the fridge or cook before consuming.

When consuming mushrooms in a salad, it makes more sense texture and flavor-wise to eat them raw as you might find cooked mushrooms to ruin the texture and temperature of the salad.

Raw mushrooms are tougher in texture and stronger in flavor when eaten raw, so this is something to bear in mind, especially if you’ve only ever consumed cooked mushrooms.

Some mushrooms such as oyster mushrooms are quite tough and need to be cooked to be consumed easily.

Reishi mushrooms are also very tough and need to be cooked before eating.

White mushrooms are fine to be eaten raw although you should ensure that you have washed them very well.