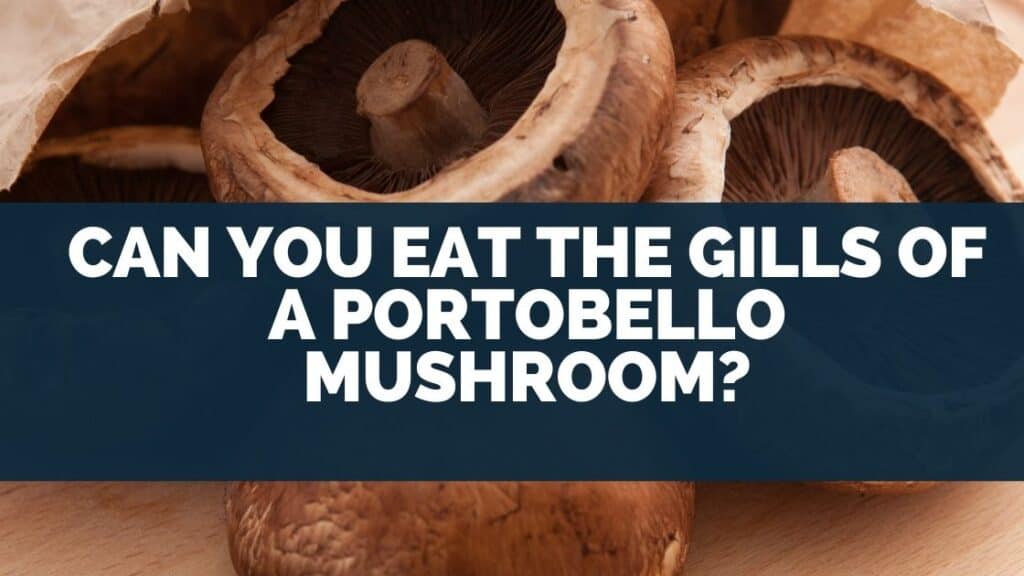 Yes, you can eat the gill of a portobello mushroom.

But the gills often hold dirt and will usually discolor the rest of your dish, that’s why it’s best to remove them before eating.

These gills of the portobello mushrooms are dark and transfer their color onto almost everything that it comes into contact with.

This means that as you use the portobello mushroom in your cooking, the gills will color any sauces or stuffings that are part of the recipe.

The gills can sometimes hold dirt from where they were grown.

Removing these gills means removing this dirt from being added to your dish.

Cleaning portobello mushrooms is important even if the mushroom doesn’t look bad.

Use a damp paper towel to gently clean any dirt from the mushroom.

It’s best to use this as it means that you don’t get rid of any flavor from running it under water.

Cut out the stem or twist it out with your fingers.

Carefully scrape away the gills from underneath with a spoon.

The gills can be eaten but they often hold dirt and the dark color will usually discolor the rest of the dish, so whilst they are edible you might find that you want to remove the gills. 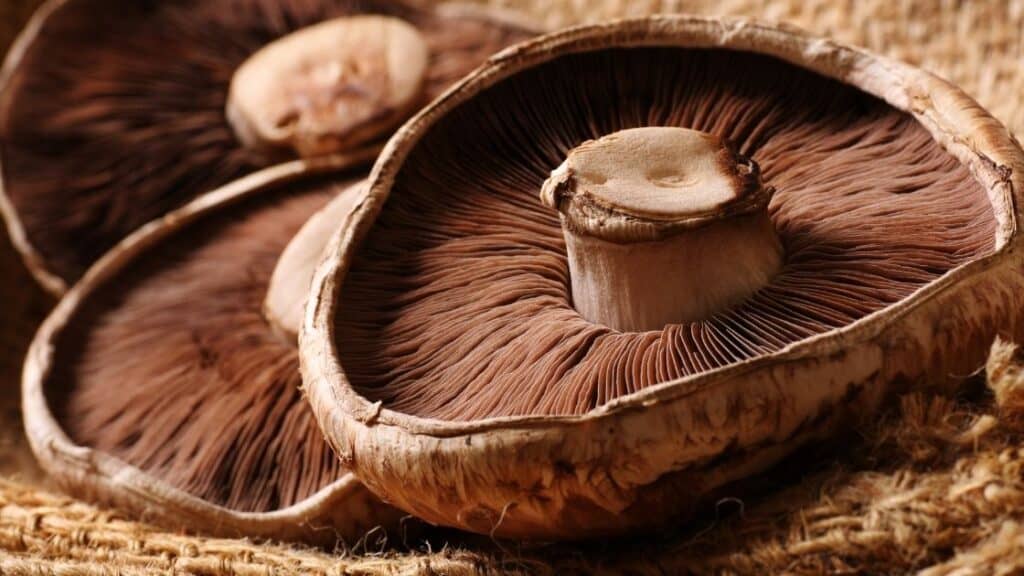 Raw or undercooked mushrooms may be avoided due to the presence of agaritine, a naturally-occurring toxin.

This toxin is reduced through cooking or even storage, so shouldn’t cause an issue.

The chitin in mushrooms may cause some digestive issues when consumed raw, cooking helps break down the chitin.

The gills on portobello mushrooms can gather dirty and transfer their dark color, so you may want to remove them before using although they are edible.

Some people suggest the best way to avoid eating raw portobello mushrooms is due to the presence of a naturally-occurring toxin called agaritine.

Agaritine is destroyed during the cooking process which is why many suggest that mushrooms must be cooked before consumption.

Although it seems that agaritine is not as dangerous as we once believed, agaritine levels are also reduced not just through cooking but also by storing mushrooms.

By the time you purchase mushrooms from the store, the agaritine will have significantly dropped.

Cooking portobello mushrooms not only reduces the levels of agaritine but also makes them easier to digest and enhances their flavor.

Mushrooms contain chitin in their tough cell walls, this chitin is difficult for the body to break down.

When cooked, the chitin breaks down so it can digest better.

Sometimes even when cooked mushrooms don’t digest fully, this is why you should also ensure that you chew mushrooms well.

The gills on portobello mushrooms are safe to eat but they can often gather dirty or sandy particles, this is why they should be removed or cleaned well.

The gills also discolor whatever they come into contact with, and can stain the rest of your dish.

It might be easier to remove the gills to prevent finding sand in your food or having it become discolored.

The best way to get rid of them is to scrape them out with a spoon, this way you avoid staining your fingers.

If you cook the cap whole, it’s best to score it lightly so steam can easily escape.

This quickened the cooking time and ensures it cooks evenly.

If you marinate your mushrooms, scoring the caps helps to allow the flavors to penetrate better. 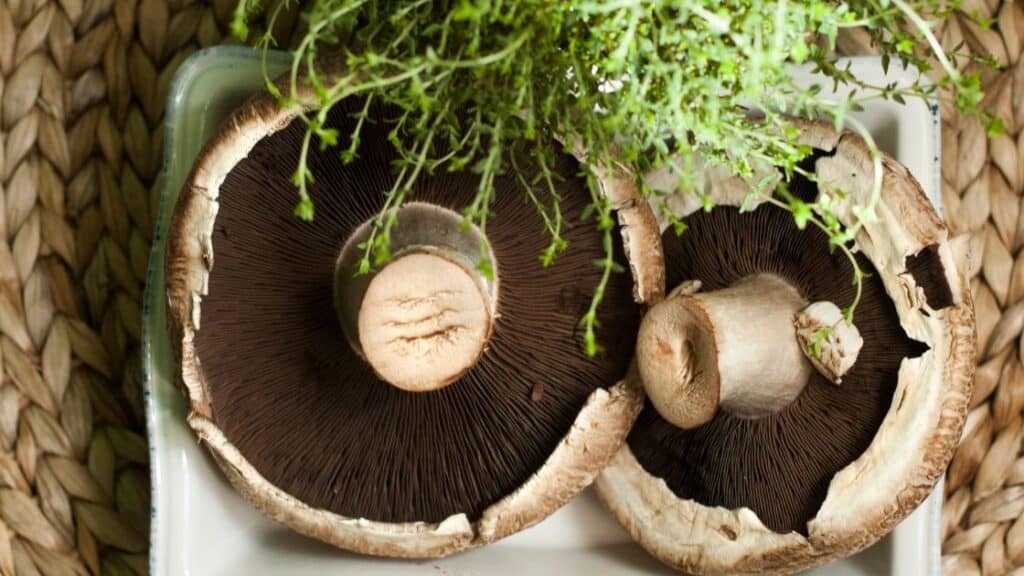 Portobello mushrooms can cause negative effects if they aren’t cooked well as the chitin present can be hard to digest.

If you have an allergy, you could suffer from an allergic reaction if you consume mushrooms.

The purines in portobello mushrooms can build up and cause kidney issues, if you already have kidney-related problems, it might be best to avoid them.

There are a few potential negative effects of portobello mushrooms, the presence of agaritine said to be carcinogenic, chitin, an allergic reaction, and the purines.

The first, agaritine is considered carcinogenic.

Agaritine levels are reduced when cooked which is why many people suggest only consuming thoroughly cooked mushrooms.

However, agaritine levels are also reduced when mushrooms are stored.

Although it seems that agaritine is no longer as harmful as once thought, it might be best to only consume cooked portobello mushrooms due to the chitin, which makes up the tough mushroom cell walls.

Chitin is hard for the body to digest which is why you might find that your body struggles to digest mushrooms well.

Cooking mushrooms helps break down the chitin to make it easier for the body to digest.

You might also find that chewing your food well also helps break down the chitin.

The spores found in portobello mushrooms can cause a skin allergy or a respiratory allergy for some people.

Portobello mushrooms have purines which can cause issues for some although it’s fairly rare.

Purines break down and form uric acid which when accumulated can cause kidney issues such as gout, kidney stones or kidney dysfunction.

If you already have kidney issues, it might be best to avoid eating mushrooms or reduce the amount you consume.

How to tell if portabella mushrooms have gone bad 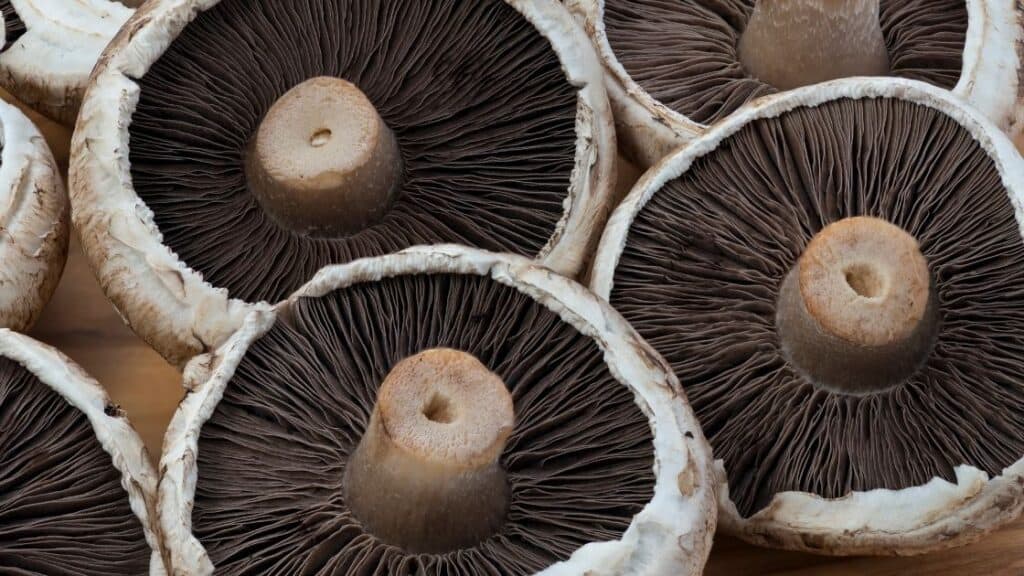 If portabella mushrooms are slimy, mushy, discolored, shriveled, or have a bad smell, then these are signs that it has gone bad.

Mushrooms may have one or a few of these signs.

These include when the mushroom has shriveled up, is slimy, mushy, has dark spots, or has a bad smell.

Once mushrooms have become slimy, they should be discarded.

They can become slimy if they’ve been stored in the fridge for too long.

Sometimes when mushrooms go off they wrinkly instead of going slimy.

It’s fine to dry out mushrooms a little, you don’t want them to be super wrinkly.

When mushrooms begin to discolor or have dark spots, they should be thrown away.

Keep a close eye on them whilst they’re in the fridge for any dark spots or discoloration.

Mushrooms should be stored for around 7-10 days in the fridge when whole and 5-7 days if cut.

If mushrooms have been stored for longer than this period, you should check carefully to see if they show any signs of being off.

They may still be completely fine so use your judgment to work out if they’re still good enough to eat.

If the mushrooms have a strong or sour odor, they’ve most likely gone bad.

Mushrooms typically have an earthy and fresh smell.

Mushrooms may only have one or a few of these signs, you should exercise your own judgment to figure out if the mushrooms are still good or not.

To prevent mushrooms from turning bad too quickly they need to be stored properly.

Mushrooms should receive some air so they don’t dry out too quickly.

Don’t wash them before storing them as the excess moisture may cause the mushrooms to go bad much quicker.