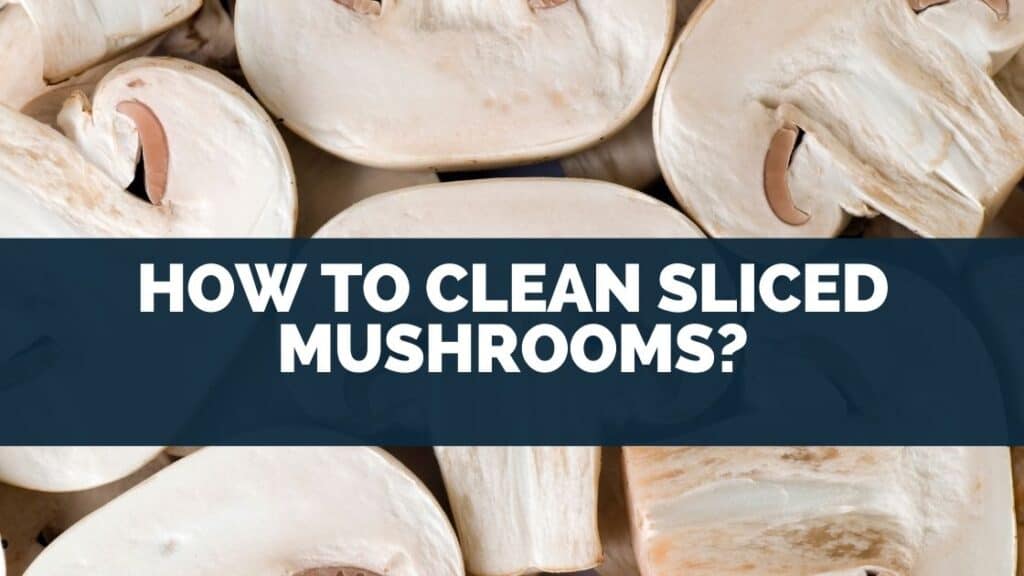 Mushrooms, just like fresh vegetables and fruits, should be washed before cooking.

Cleaning mushrooms will remove any leftover soil, dust particles, dirt, and bacteria such as E.coli.

Bacteria can hide in the underside of the mushroom cap, in between the ridges, or gills.

The easiest way to clean sliced mushrooms is with a colander.

Place the sliced mushrooms in the colander and wash them under running water for a few minutes, brushing off any dirt and soil.

Then dry off the sliced mushrooms using a kitchen towel or clean dishcloth and presto!

Your mushrooms are ready to be used in your favorite dishes.

However, you should always wash mushrooms before using them.

Residual bacteria or pesticides from the mushroom farms often lurk in between the gills of the mushroom cap, and feces and other nasties can remain.

Depending on the species of mushrooms, an easy way of washing them can be simply rinsing them in a colander under running water then patting them down to dry.

If you want a thorough clean, you can use a vegetable brush to scrape off any residual dirt and particles that might be present in the cap and stems.

Remember to clean the underside of the mushroom cap.

The ridges and gills often hoard leftover dirt and debris.

Go to top
Table Of Contents show
1 Do You Have To Clean Sliced Mushrooms?
2 Washing Mushrooms Myth
3 What Happens If I Don’t Wash My Mushrooms?

Do You Have To Clean Sliced Mushrooms? 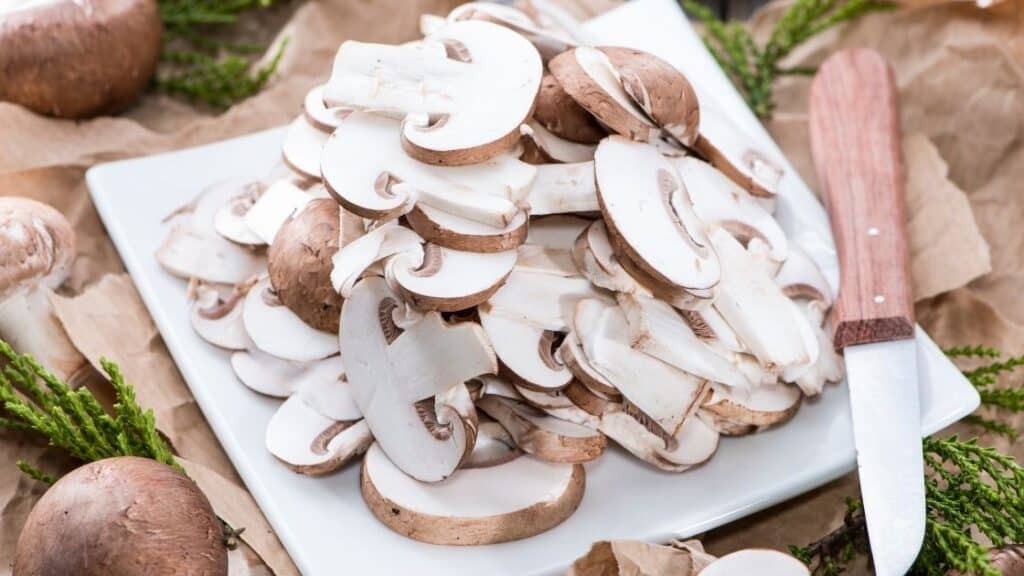 During the growing process, fertilizers used in the soil can include manure and other pesticides and chemicals.

Washing them gently or using a vegetable brush will significantly reduce any leftover particles.

Often, chefs suggest not washing sliced mushrooms as it is thought that it makes the mushroom colorless and ruins the taste.

However, traditional chefs suggest that gently washing mushrooms will not damage the tender texture or earthy taste.

Traditional chefs use brushing, wiping, spinning, and rinsing as their most common ways of washing sliced mushrooms.

If you want to brush your mushrooms down, you can use a soft toothbrush or a vegetable brush.

Sliced mushrooms may need more brushing as they have more nooks and crannies than whole mushrooms.

If you don’t want your mushrooms drenched in water, you can also use a damp paper towel or clean, wet dishcloth to clean them.

Have the sliced mushrooms lying on each side and wipe them off gently before flipping them and wiping the other side.

These spinners kick off excess water and dirt with centrifugal force.

First, wet your mushrooms and then place them in the spinner for about half a minute.

Spinning is a quick, efficient way of getting your sliced mushrooms cleaned but also comes with the risk of mushrooms getting torn or broken.

Although most mushrooms can be wiped or washed, morels might prove tricky due to the numerous ridges throughout their shape. 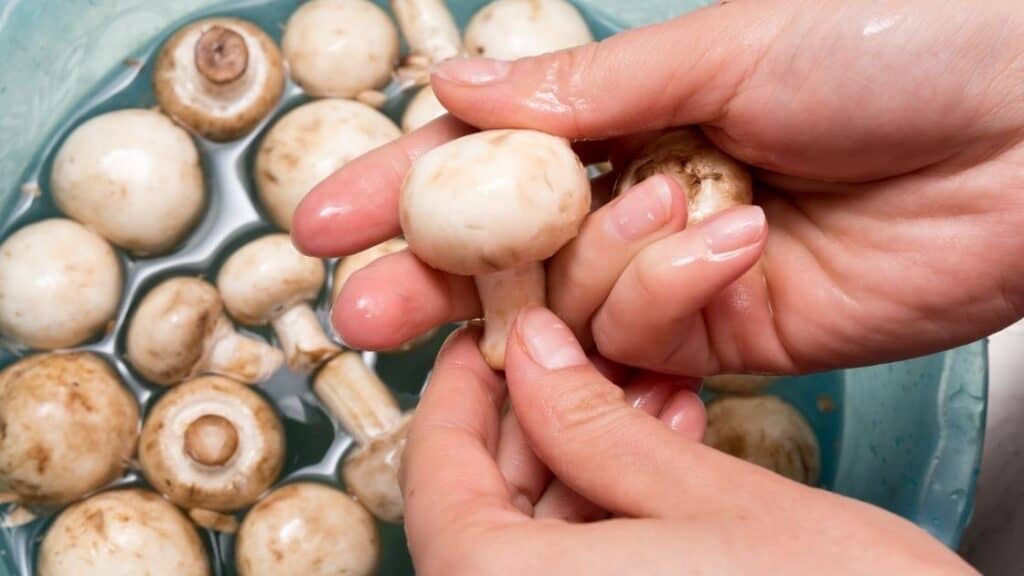 There is a common myth that washing mushrooms will cause them to absorb high amounts of water and ruin their taste and color.

Cooks that don’t believe in washing mushrooms often wipe them down with a damp cloth or paper towel instead.

However, in another camp, other cooks believe that wiping down sliced mushrooms is too slow and time-consuming, in addition to wasting time, effort, and water.

Mushrooms are porous and can absorb significant amounts of water like a sponge, but only when they are kept immersed in water continuously for long hours.

Keeping them under running water and washing them quickly is unlikely to affect their taste and flavor.

However, this too is irrelevant.

The amount of water absorbed by mushrooms when washed under running water is too insignificant to affect the cooking time.

Simply pat them down to dry after washing and the cook times of washed and unwashed mushrooms will be negligible.

The same folks that don’t wash mushrooms also believe that doing so will take over the beneficial nutrients found in most species, leaving behind toxic substances.

Again, untrue. The nutrients and antioxidants like ergothioneine remain present even after washing.

Many mushroom species have umami flavor due to the presence of glutamate.

Glutamate is found in the cell walls of the mushrooms, and will not be removed by rinsing or washing.

Washing mushrooms is a safe, hygienic way of preparing your favorite species.

Not washing them may leave bacteria or viruses under the cap and around the stem, leaving you vulnerable to food poisoning.

In addition, mushrooms with bruising, black spots, or slime may be spoiled and should be discarded.

What Happens If I Don’t Wash My Mushrooms? 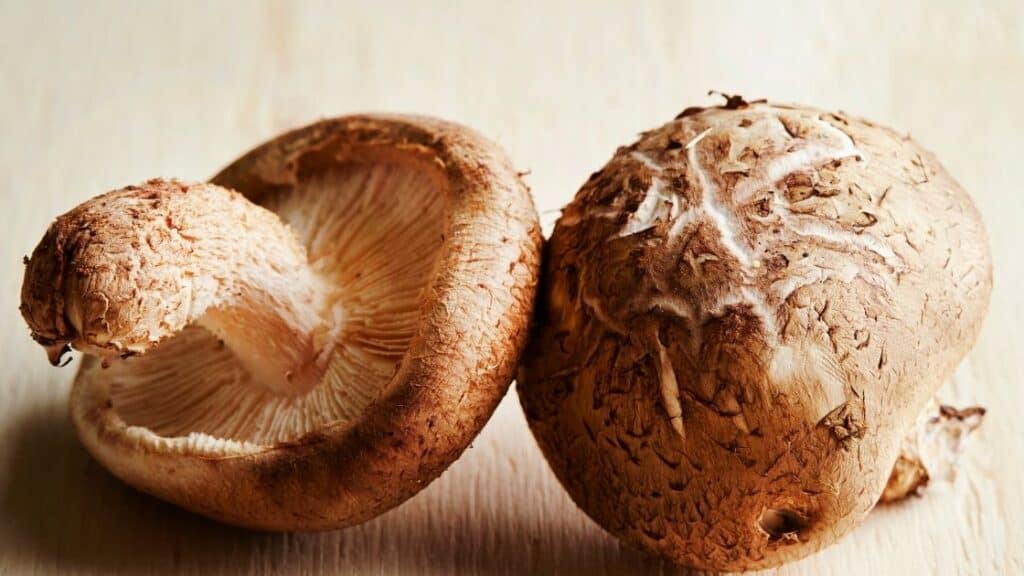 Farmed mushrooms often contain pesticides used in growing, and the gills of the mushroom cap is the favorite hiding places of bugs and other bacteria.

If you don’t want your mushrooms before consumption, dangerous diseases such as salmonella and E.coli could still be present and you would be ingesting them.

Salmonella and E.coli are severe diseases that can potentially turn fatal.

Whether you harvested mushrooms in the woods or bought them in a store, mushrooms should always be washed before cooking to remove any dirt, bugs, or bacteria hiding in them.

There is a common misconception that washing a mushroom will remove much of its taste and flavor or take away its nutrients.

However, it has been shown numerous times that gently washing mushrooms under running water does not cause them to lose flavor or any of their beneficial nutrients.

In addition, commercially grown mushrooms are grown in fields with manure often used as fertilizer.

The manure often finds its way onto the mushrooms and remains there until you buy them.

Not quite what you would want in your food!

These bacterial depositions can cause diseases such as diarrhea, food poisoning, and various other gastrointestinal upsets.

Washing would remove the bacteria and other potential toxins that would otherwise lead to severe illnesses.

One of the best ways to clean mushrooms is by brushing them lightly with a damp cloth, brush, or any other soft material.

You can remove visible signs of dirt and other debris this way, or run the mushrooms under running water, gently rubbing them to remove any leftover particles.

In addition, check your mushrooms thoroughly for spoilage before cooking them.

Any black splotches, slime, or mush and the mushroom should be discarded.

The outer covering of the mushroom cap shouldn’t feel slimy, slippery, or wet.

Store-bought mushrooms are generally safe to wash and eat right away.

However, when harvesting mushrooms in the wild, exercise extreme caution.

There are over 100,000 species of mushrooms, many inedible, some poisonous, and some potentially fatal such as the deadly death cap, Amanita phalloids.

Mushroom poisonings are common worldwide with a multitude of poisonous mushrooms looking incredibly similar to other edible varieties.

If you are not 100% sure of the species of mushroom you harvested, it would be prudent to stay away from it.

Poison centers often have numerous cases of mushroom poisonings each year due to mistaken identities.