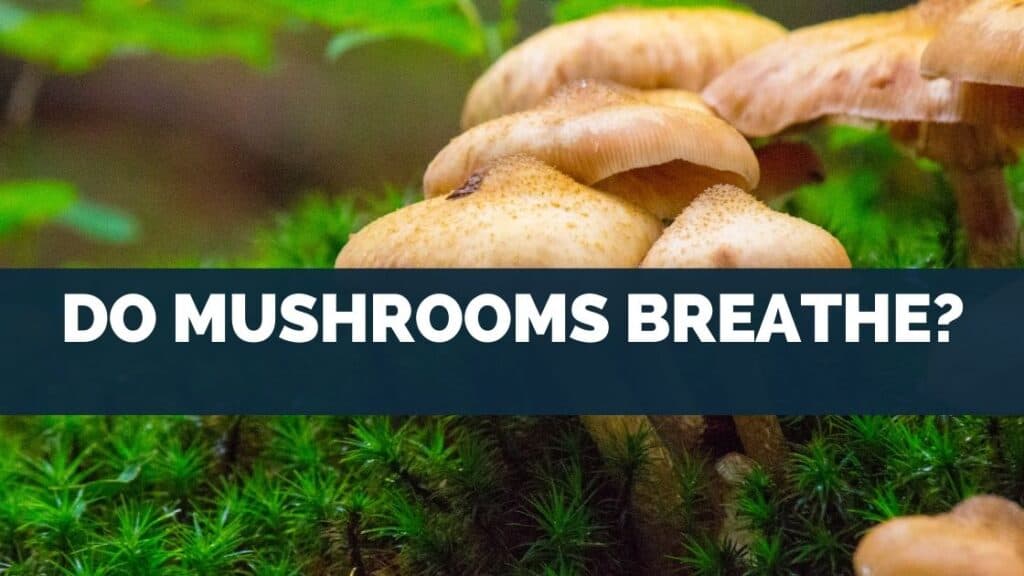 Mushrooms are a type of fungus that have a cap and stem.

They can be eaten or used in medicine.

Fungi is a broader category, including mushrooms, mold, yeast, and mildew.

The main difference between the four types is how they obtain their food.

Mushrooms breathe as they are living organisms.

They do this through anaerobic respiration facilitated by pores naturally found in soil.

Breathing enables mushrooms to extract energy from organic molecules such as glucose.

Mushrooms breathe in a way that is different from most other plants.

They don’t have lungs as we do, instead, they have gills on their undersides that take in oxygen from the air and release carbon dioxide.

Mushrooms complete their development as a result of the gas exchange they receive from the environment.

The mushrooms would still thrive if there was a way for them to complete this gas exchange without using air.

Mushrooms found above the ground obtain oxygen from the atmosphere, and it travels through the plasma membranes and then the mitochondrial membranes.

The oxygen binds to electrons and hydrogen protons in forming water and oxidizing carbon.

The carbon is required to extract small molecules that contain energy called ATPs from glucose.

Some mushrooms are chemotrophs which are cells that have the electron transport chain to synthesize ATP without the need for solar energy as a source of energy.

The cells can use inorganic compounds as substrates to generate energy for respiratory metabolism.

Go to top
Table Of Contents show
1 How does a mushroom get nutrients?
2 How do morel mushrooms reproduce?
3 Morel mushroom growing conditions

How does a mushroom get nutrients? 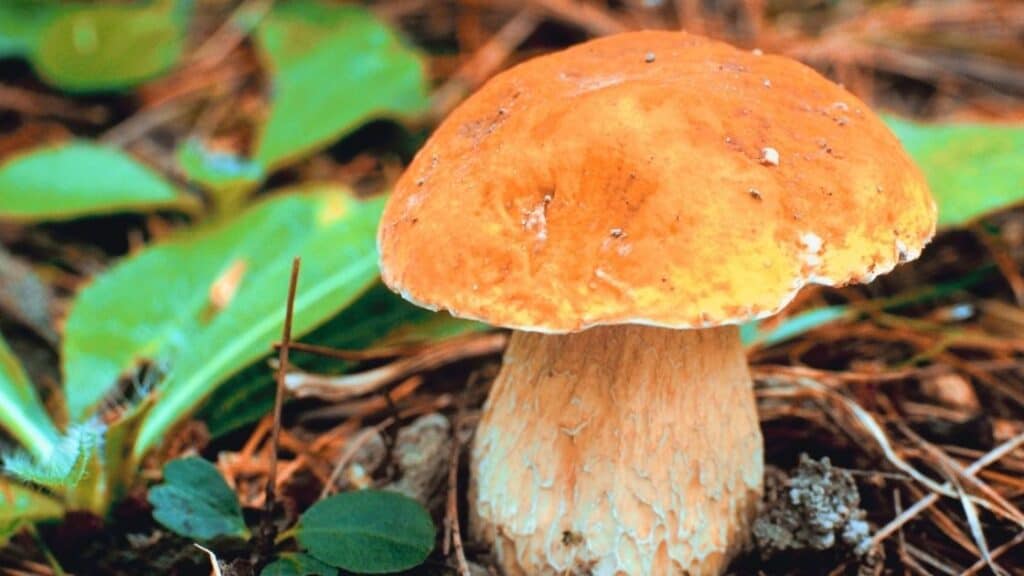 Mushrooms are categorized as fungi as they are neither plants nor animals.

They do not contain chlorophyll, and therefore, cannot make their food for nutrition.

For mushrooms to develop a normal metabolism and grow properly, they require oxygen and a specific pH.

Magnesium, potassium, and phosphorus are considered macronutrients necessary for mushroom growth, with trace elements of iron, zinc Se, Mn, Mo, and Cu being required for a broad range of functions.

Mushrooms have evolved to grow on a wide range of organic substrates such as sugars and plant wastes that provide them with nitrogen, and for this reason, they are considered saprophytes.

Mushrooms begin life underground as the fruit of a larger fungal network that grows beneath the ground called the mycelium.

Mycelium can live underground for a very long time in the wild.

If the conditions are favorable, such as food, humidity, and temperature, buds will form seeking sunlight.

Fun Fact: The biggest organism in the world is a fungus that was discovered in Oregon.

The fungus is 2,200 acres and covers an area of three square miles!

Compost made from manure contains adequate amounts of the nutrients required for growing mushrooms.

Other types of mushrooms can extract the nutrients they require from the wood of the logs or sawdust in which they grow.

Manure and straw can be replaced with a mixture of sand, peat, corn, and moss.

How do morel mushrooms reproduce? 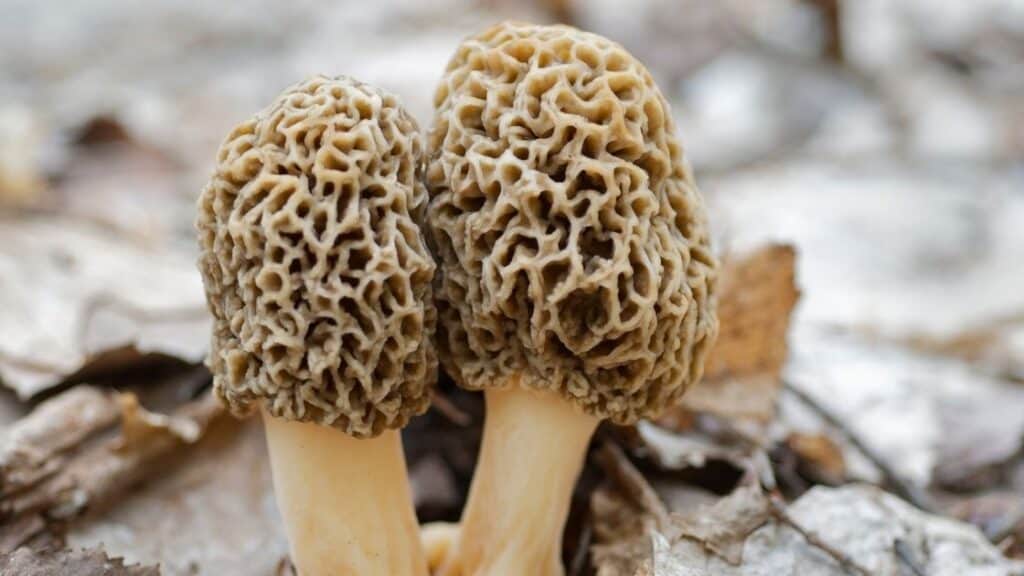 Like all mushrooms, morels reproduce by spores, the “seeds” of the fungi world.

The conidium spore, in particular, of morel mushrooms, is produced asexually.

The spore is produced on a conidiophore by microscopic asci that line the cap of this mushroom.

The spores on the asci are then released and germinated when the mushroom is above ground and senses light.

A fungus can grow from seed. It grows little threads called mycelia, which help the fungus grow.

When the conditions are right, a sclerotium forms on the mycelia and it becomes hard.

The hard part is called a fruiting body and is the edible part of a morel mushroom.

Once the fungus has germinated through asexual reproduction, the primary mycelia produce a sclerotium, which buds the fruiting body of the morel, the edible part, and the process is repeated.

If the conditions are right, the sclerotium can turn back into primary mycelium and reproduce.

However, if the conditions are not right to form fruiting bodies above ground, the fungus will grow.

It goes towards the roots of plants.

In order for a sexual life cycle to be completed, the initial haploid hyphae must fuse with other hyphae containing different haploid nuclei that have compatible mating types.

This means that they fuse together often. As a result of these frequent fusions among morel hyphae, haploid nuclei in the Ascomycetes begin to pair up and form diploid nuclei.

It is not uncommon for 300 morel mushrooms to grow from a single dead or decaying hardwood tree trunk!

More than one species may occupy the same host, crowding each other out, suppressing the growth of the others.

Morel mushrooms are commonly found in the forests of Europe and North America in early or mid-spring depending on latitude and elevation.

Some popular methods include frying, baking, or sautéing them.

Morels have a somewhat nutty flavor to them and can be eaten on their own or used as a meat substitute in other dishes.

Morels, like most edible mushrooms, grow in the wild and can often be found near decaying organic matter such as wood or undergrowth.

They are also sometimes cultivated in controlled environments for food purposes.

Morel mushrooms can be difficult to identify, so it is important to consult a guide before harvesting them.

Morels are prized and can be expensive. 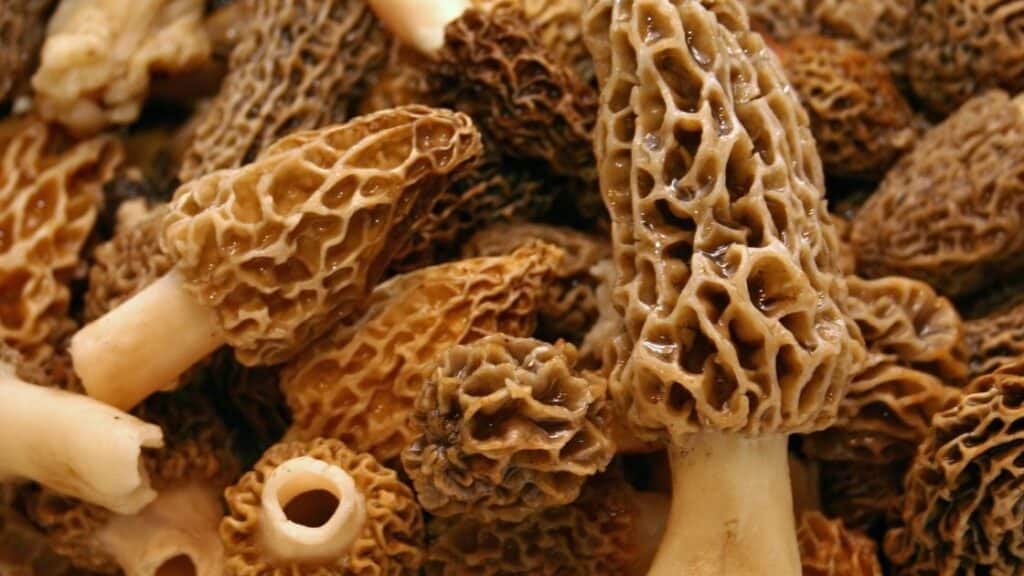 The most crucial determinants for morel mushroom growth are moisture and temperature.

Nighttime temperatures should be above 40°, with daytime having an average temperature of 70°.

Morels cannot grow in either too hot or too cold soils.

They prefer moist soil, which gives the mushroom an ideal condition to grow mycelium underground.

If the soil is not moist enough, this process will be hampered.

These include requiring a subsoil food source such as decaying roots or surface sources like fallen barks.

The conditions are necessary to provide nutrients and energy for the overall growth of the mushroom.

Mushrooms obtain the nutrients they require by synthesizing organic material.

Starch, sugar, lignin, proteins, and nitrogen are the specific nutrients they require to grow.

They thrive in loamy soil that preferably has decaying wood and constant moisture at cool temperatures making winters and rainy springs the ideal seasons for their growth.

Morels do not require sunlight as they cannot extract nutrients from the sun as green plants do.

They, however, do not require a dark environment to grow.

Growing mushrooms in the dark has the advantage of preserving the moisture that mushroom spores require to reproduce.

There are many ways to cook morels, but the most common is to saute them in butter.

This video will show you one great way to cook morels

You can also add them to dishes like pasta or risotto.

Another great way to cook morels is to fry them up in a pan with some oil and garlic.