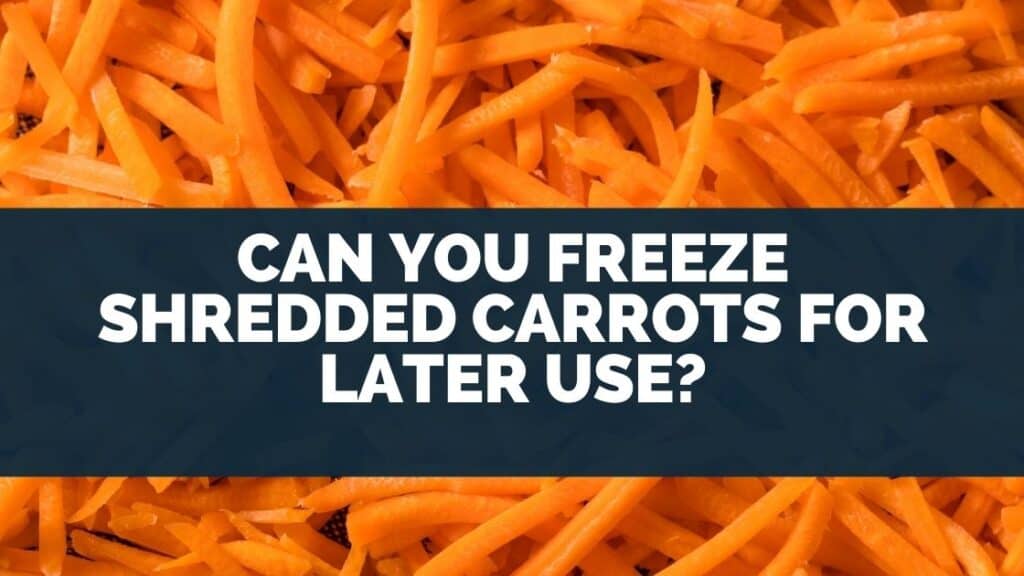 Shredded carrots are required for certain recipes but carrots go bad after a week or two even in the fridge.

When preparing carrots for recipes you may also shred too many carrots and have some shredded carrots leftover.

So below is a summary of if there’s any issue with freezing shredded carrots and using them later.

It’s perfectly fine to freeze shredded carrots to be used at a later date.

Frozen carrots can last a year or more in the freezer.

Blanching shredded carrots before freezing keeps them freshest for the longest.

Carrots can also be blanched and then cut into any shape before freezing.

There are a few different ways to freeze carrots.

But, there is one tried and true method that works really well.

Below, I will explain step by step the best method to freeze them to get the best results.

Together, with what blanching does to carrots before freezing them. 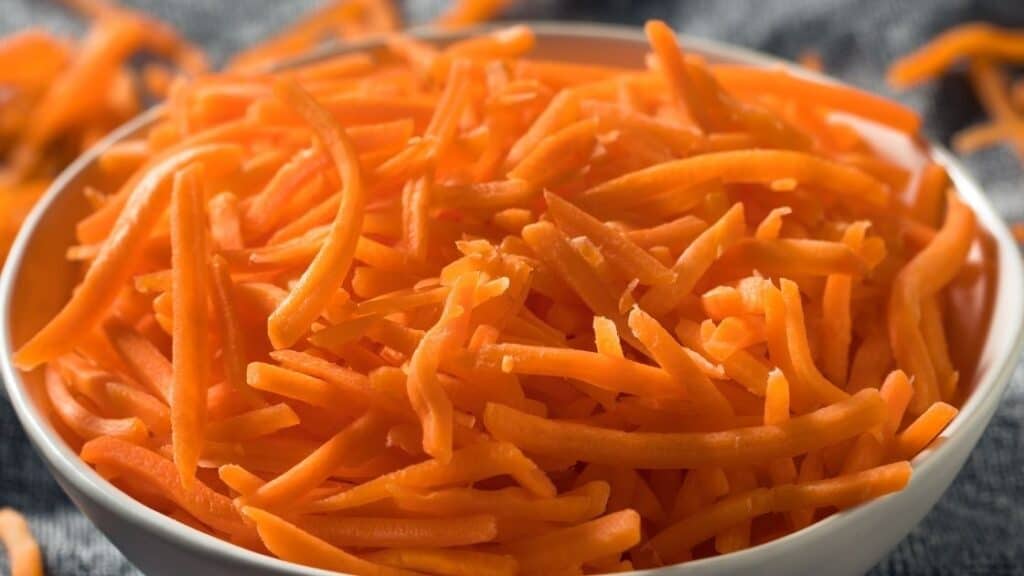 When some foods are frozen and then defrosted they don’t turn out well.

Each vegetable is unique in this respect.

Therefore here’s whether carrots freeze well and if it’s a good idea to freeze carrots.

Shredded carrots freeze well and last up to 1 year in the freezer.

Blanching them before freezing them will make them taste better when you use them compared to unblanched carrots.

When foods are cooked the heat changes their chemical makeup.

The total amount of nutrients in cooked foods compared to raw foods is typically quite minimal.

But, for water-soluble vitamins and minerals such as vitamin C, some of the total amount is lost into the water when they’re steamed or boiled according to Harvard University.

I looked into how the vitamins and minerals in carrots differ based on the cooking methods and summarized it into side-by-side tables so it’s easy to compare in this article the difference between raw carrots and cooked carrots.

I covered methods such as frying, baking, and boiling, as well as, raw carrots.

As you may be aware, blanching is where you boil food for a very short amount of time typically a couple of minutes.

The main purpose of blanching carrots and other vegetables is that it breaks down enzymes in the carrots.

These enzymes naturally break down the carrots and cause them to go bad faster.

So, removing them by blanching causes carrots to last much longer.

This is the case whether you put them in the fridge or freezer.

Shredded carrots can be frozen in the exact same way as shown in the video.

The difference is that it’s generally much easier to shred carrots when they’re raw.

Once carrots are defrosted they can lose some of their texture and are generally softer.

This makes it more difficult to shred them.

Therefore, it’s best to shred them before freezing them.

Here’s a video that shows how to defrost carrots and how their texture looks after defrosting:

Can Shredded Carrots Be Frozen without Blanching? 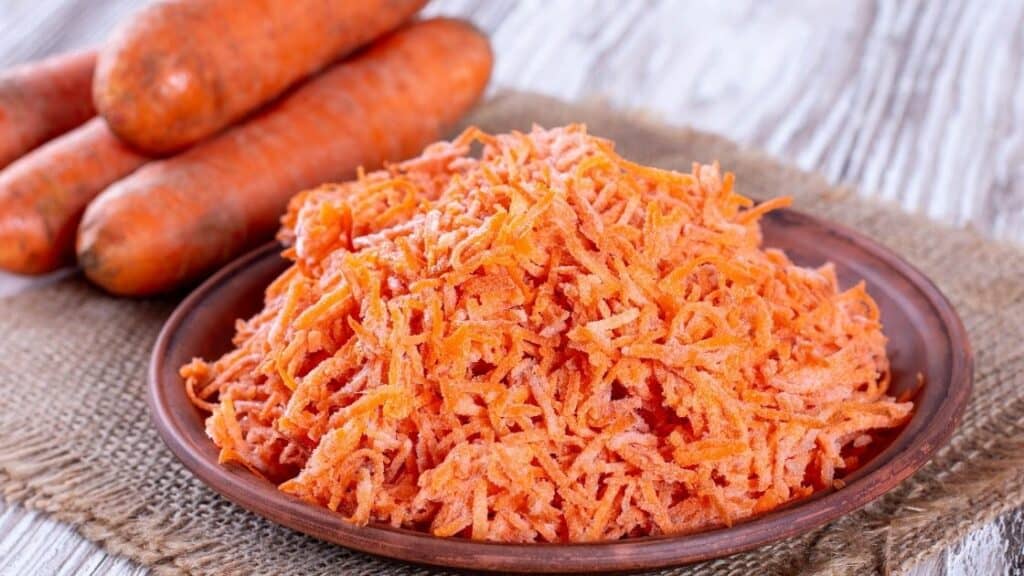 Blanching is an extra step that can be done when freezing carrots.

Many foods can be put in the freezer without first blanching them.

So is necessary to blanch shredded carrots before freezing them?

Shredded carrots can be frozen without blanching them.

Blanching them first destroys enzymes in the carrots that make them break down faster.

So, blanching carrots before freezing them will keep the flavor for longer and make them last longer in the freezer.

Shredded raw carrots put into the freezer will keep for a good amount of time.

On the order of 3 to 6 months before they start to degrade in taste.

Whereas, blanched shredded carrots will keep their taste for twice as long.

When frozen carrots are defrosted they do lose their texture somewhat.

They aren’t extremely hard like they are before being frozen.

This is typical of many vegetables such as onions, and potatoes.

Interestingly, potatoes develop a grainy texture after being defrosted.

And bananas turn to mush. Each fruit and vegetable is different in this regard.

It’s fine to refreeze defrosted frozen carrots according to the University of Minnesota.

It generally degrades the flavor and texture.

As carrots and other vegetables freeze the moisture content turns to ice.

When ice forms it creates what’s called a lattice structure on a microscopic level that are the building blocks of an ice crystal.

As this structure forms, it causes some of the moisture content to be drawn out of the food as it’s attracted by chemical forces.

After it defrosts these crystals turn to water again.

But, because the water molecules are displaced the texture of the carrot isn’t as it was before it was frozen.

The same occurs to a lesser extent when frozen only once and then defrosted.

Many vegetables that are defrosted are best used in soups and stews where they turn to mush or a blended into a liquid.

This makes the slightly decreased texture not noticeable.

Shredded carrots are generally used in baking such as in muffins and carrot cake.

So, this generally isn’t an issue with shredded carrots.

The only thing is if you use them in a salad the decreased texture and flavor will be noticeable.

And therefore, it’s better to use fresh carrots for salads.

Certain vegetables have a long shelf life, whereas others only last one to two weeks at the most even in the fridge.

Others also last much longer in the fridge.

For example, avocados don’t ripen if kept in the fridge and last much longer.

For carrots specifically, I explained in this article whether carrots go bad in the fridge and how long they last.

As well as, whether grated carrots can be kept in the fridge.

How Do You Freeze Shredded Carrots without Blanching? 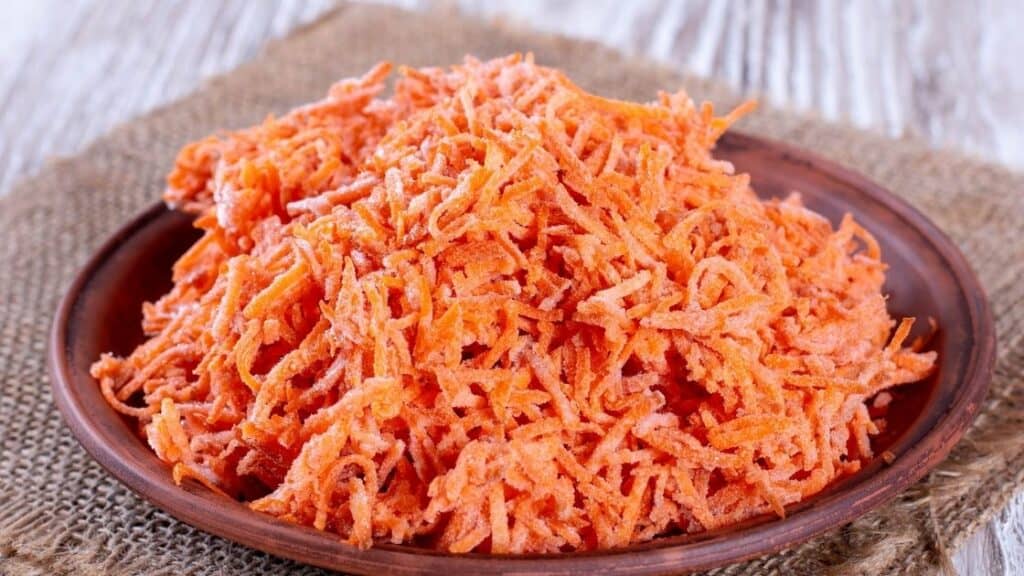 But, you may want to cut the preparation time down or plan to use them within 6 months or so.

To freeze them without blanching here’s the game plan.

Pack them into ziplock bags and suck out all the air.

Once that’s done pop them into the freezer.

You can choose to cut them before freezing them so that they don’t take up as much space but it’s not required.

Freezer burn is where the edges of the shredded carrots become dehydrated.

This happens because as the carrots are freezing the liquid in them turns to ice.

As the ice forms, it draws out the liquid from where it’s located in the carrot.

On the edges, the water is removed from the carrot and the edges become dehydrated.

If air is around the edges of a carrot when it’s freezing.

For example, if there is space in the ziplock bag or if you were to put them into an air-tight container that isn’t completely full.

Then the water content in the air would form ice crystals that will draw the water in the edges of the carrots into it.

Thus, removing the water from the edges of the carrot.

This isn’t so much a problem in the center of the carrot as the ice crystals from where they are.

And are insulated from the air.