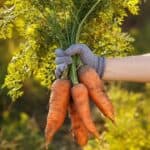 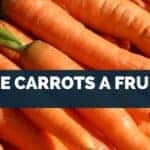 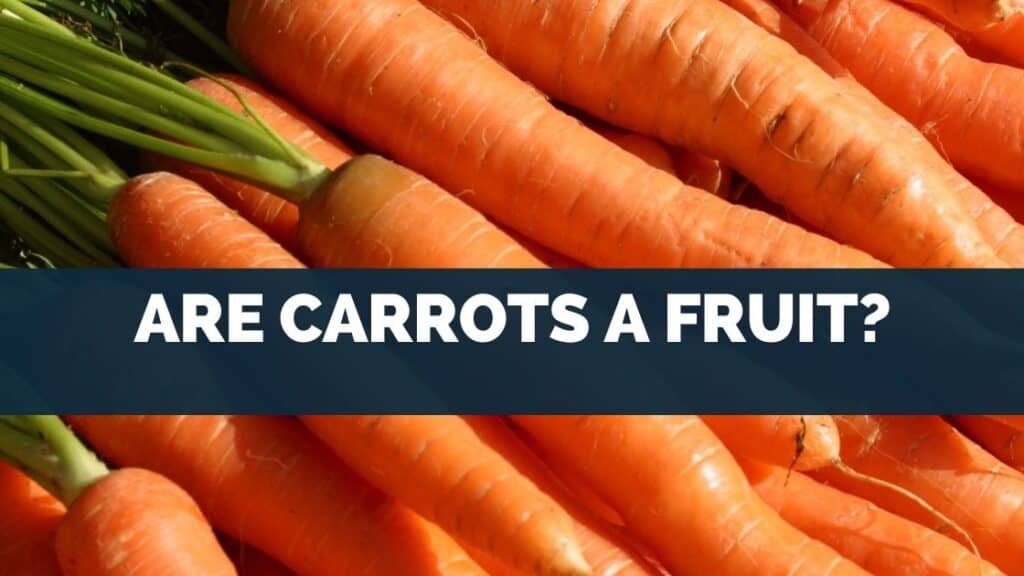 Since carrots have a mildly sweet flavor, it may be common to wonder if they are classified as fruits or vegetables.

Carrots are not fruits, but rather the roots of the plant Daucus carota.

Typically, the way to distinguish between fruits and vegetables is to note the presence or absence of seeds — fruits have seeds, and vegetables do not.

Fruits are the plant’s vehicles for spreading its seeds and creating more of that plant, while vegetables are other structures of the plant (such as leaves, stems, or roots). 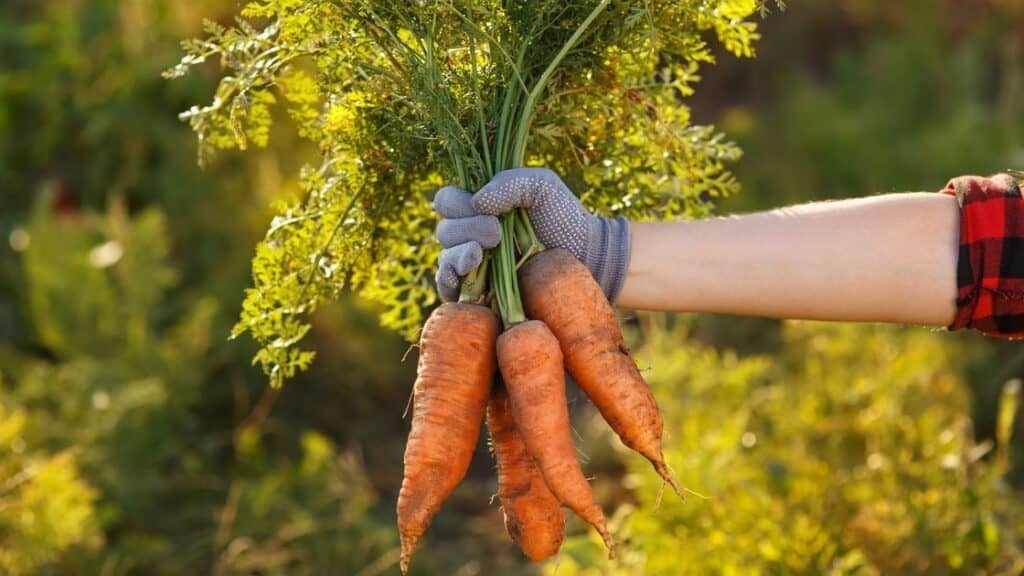 Yes, carrots are the roots of a plant called Daucus carota, which is related to parsley, fennel, and dill plants.

The carrots are the edible taproots of the plant, which is where the plant stores carbohydrates and sugars for its flowering season.

The most commonly eaten variety of carrots are orange in color, but there are also purple, black, red, white and yellow varieties.

Each variety of carrot varies a bit in the nutrition it provides, and the color provides a clue to its most dominant nutrient.

Orange carrots are high in the plant form of vitamin A (beta-carotene), while red carrots are higher in lycopene (the plant compound most commonly thought to be found in tomatoes), and purple carrots have anthocyanin (found in other purple-ish plant foods, like blueberries and elderberries).

Carrots are biennial plants with two-year life cycles, but they are usually harvested on an annual basis and are not allowed to complete their life cycle.

If they were left un-harvested in that first year though, they would produce flowers and a fruit called schizocarps.

The taproot is where the plant stores sugars that will become the energy that will fuel the flowering and fruiting process, if the plant is allowed to complete its life cycle. 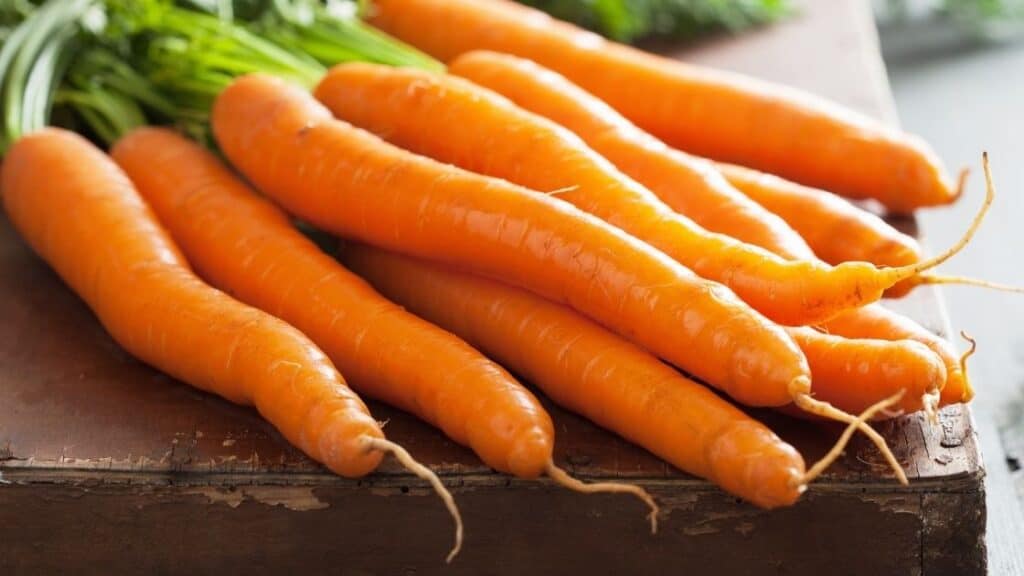 Carrots are low in both fructan and mannitol and should be fine to include in a low-FODMAP diet, at least to see how you individually tolerate them.

FODMAPs are a compound found in many different types of foods that often exacerbate irritable bowel syndrome (IBS) and other digestive disorders.

Finding relief from these digestive issues usually involves an elimination diet in which the foods highest in FODMAPs are avoided for a period of time.

If your symptoms resolve, you may then choose to slowly and systematically reintroduce some higher FODMAP foods, to see if your symptoms still remain in remission.

This video by Dr. Michael Ruscio can give you some guidance as to how long to remain on a low FODMAP diet.

Most people would prefer not to remain on an overly restrictive diet for long periods of time and would benefit from finding foods that they can safely reintroduce without a recurrence of symptoms.

According to Monash University’s FODMAP-rating system, carrots are a “green light” food that is very low in FODMAPs.

These are foods that you can include in a low FODMAP diet, at least initially.

However, if your symptoms still don’t resolve after a few weeks on this type of diet, you may then want to experiment with removing other potentially problematic foods.

There are many types of people with long-standing digestive disorders who have problems tolerating many types of plant foods — not just the low FODMAP varieties — and you may need to remove even more plants from your diet to restore your digestive health.

Are carrots rich in carbohydrates? 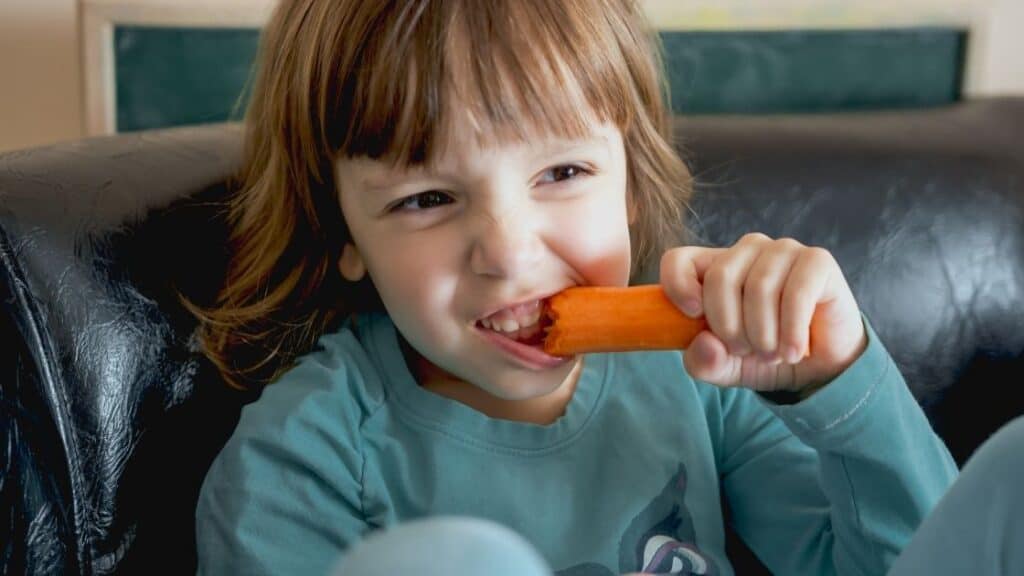 Compared with common high-carb foods eaten in most people’s diets— like bread, corn, rice, oats, and potatoes—carrots are very low in carbohydrates.

However, compared with low-carb vegetables like cucumbers and leafy greens, carrots are higher in carbs.

First, let’s compare the carbohydrate content of carrots with that of common carb-rich foods in a standard diet:

As you can see, 100 grams of white rice (weighed dry, before cooking) has 80 total grams of carbs — the highest of the six foods we compared.

100 grams of raw carrots has just 9.6 grams of carbs, in comparison.

In this context then, carrots are considered a very low carb food.

Now, let’s compare the carb content of carrots with other types of veggies commonly eaten in a low carb or ketogenic style of eating:

In this situation, carrots are actually the highest carb food that we compared — lettuce comes in at the lowest amount of carbs at just 2.9 grams per 100 grams of raw lettuce.

Just as an aside — 100 grams of lettuce is an extremely large volume of food, and most people will be hard-pressed to eat that much lettuce in one sitting (unless you use a strategy like blending or juicing).

If you’re following a very low carb or ketogenic diet, the foods you eat must be sufficiently low in carbohydrates to result in a production of ketones in your liver (if you’re interested in learning more about a ketogenic diet, the popular Ketogains Reddit FAQ is a fabulous resource).

The most common recommendation for a ketogenic diet is to keep total carbs below 50 grams per day, and some people need to go even lower in order to remain in a ketogenic state.

So in this type of diet, you would need to not only completely eliminate high carb foods like rice, bread, and potatoes, but also pay close attention to the number of moderate carb vegetables that you eat — like carrots and tomatoes.

However, if you’re not interested in following a low carb or ketogenic diet, the carbohydrate content of carrots should not be a concern to you.

You can likely eat as many as you like, even if you are trying to lose weight, as carrots are a low-calorie food that has considerable amounts of fiber, which will help you to feel more full between meals.