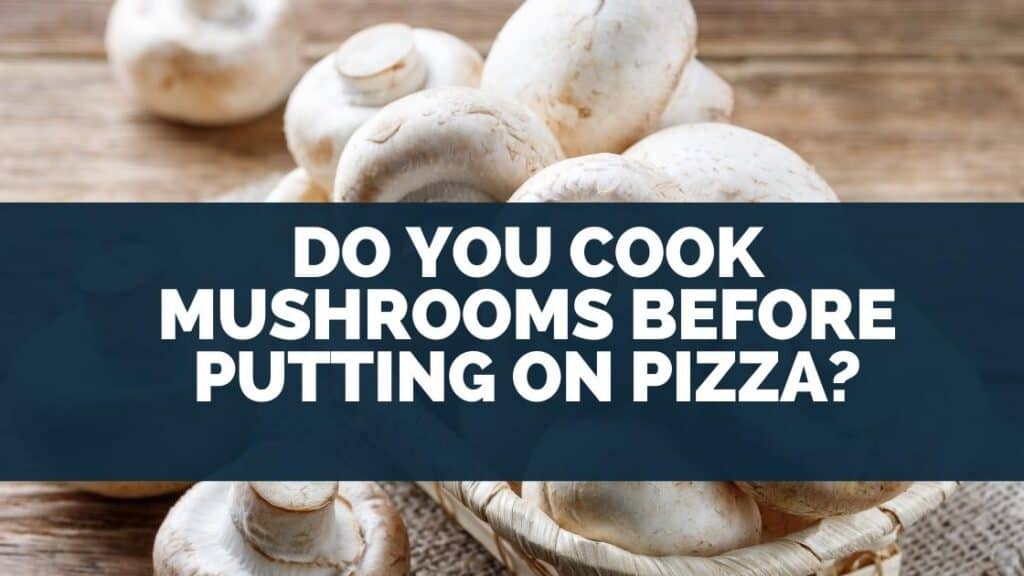 Yes, you should cook mushrooms before putting them on pizza.

The only exceptions are if you’re only adding a few thinly-sliced mushroom slices to a deep-dish pizza, as thick mushrooms on a thin crust could mean that your pizza turns soggy and the quick blast of heat isn’t the best for fuller sized uncooked mushrooms.

Cooking mushrooms before putting them on pizza helps to avoid excess moisture ruining your pizza.

For some mushroom varieties like the portobello mushrooms, pre-cooking them helps to ensure that they’re fully cooked due to their size.

If the mushrooms are larger in size, you might be better off cooking them before whereas thinner mushrooms can be added raw.

If the mushrooms are thickly sliced, it might be best to pre-cook them, thinly sliced mushrooms will cook well when added to the pizza, raw.

If you’re adding tons of mushrooms to a pizza, it’s best to precook.

The more mushrooms you add, the more likely you’ll end up with a soggy pizza.

Adding a few raw sliced mushrooms won’t cause the pizza to become too soggy.

The pizza crust is a factor in deciding whether or not you should pre-cook mushrooms, if it’s thin crust, it’s more likely to get soggy from the moisture the mushrooms release when being cooked.

Whereas a deep dish pizza won’t get soggy, however, you should be aware of the mushrooms you’re adding.

The denser the mushroom, the longer it will take to cook and the more moisture will be released.

A few thinly-sliced mushrooms added to a deep-dish pizza is perfectly fine and won’t release enough moisture to ruin the pizza.

Go to top
Table Of Contents show
1 How do you pre-cook mushrooms for pizza?
2 How do you keep mushrooms from getting soggy on pizza?
3 Can you use frozen mushrooms on pizza?

How do you pre-cook mushrooms for pizza? 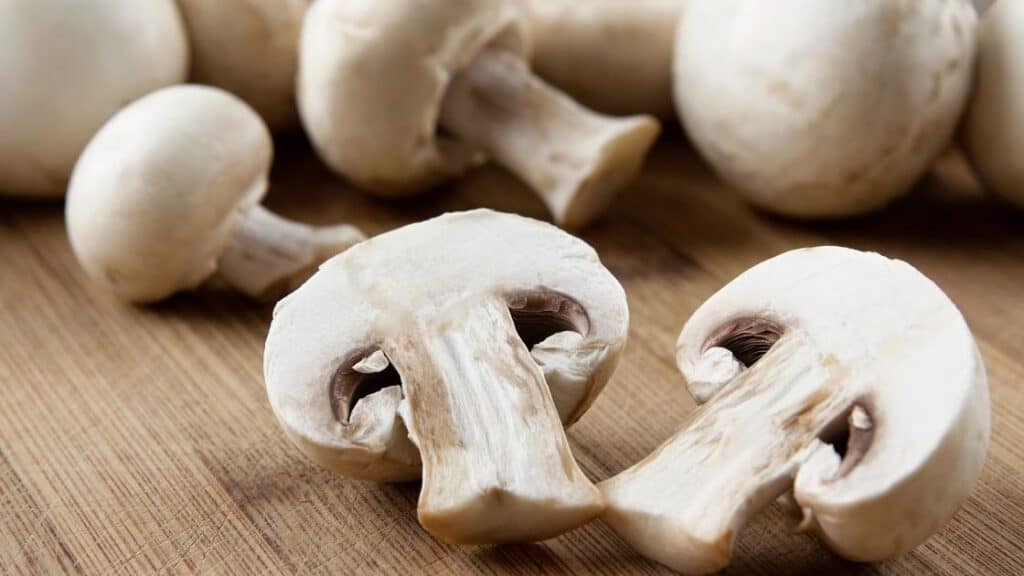 Saute the mushrooms on medium-high to high heat.

Add oil, mushrooms, and salt, and allow the mushrooms to cook through.

Cook the mushrooms to your liking and then add to your pizza.

Mushrooms are full of water and because they’re fungi and not vegetables, they shouldn’t be treated as vegetables, especially when it comes to pizza.

They contain around 90% water which is why it’s best to not add raw mushrooms to pizza, as your pizza cooks, the mushrooms will end up releasing so much water that the pizza turns soggy.

The only real exception to this is if you add just a few thinly-sliced mushrooms to a deep pan pizza, the mushrooms will cook quickly enough to avoid too much water ruining the pizza.

Sometimes, the mushrooms may not be in the oven long enough to cook through which means you’re left with a watery pizza and half-cooked mushrooms, probably not quite the result you were aiming for.

Thankfully, you can get rid of this water so you don’t have to end up eating watery pizza.

There are a few different ways to cook mushrooms but for pizza, the best way to prepare them is to saute them.

Saute the mushrooms in a skillet on medium-high to high heat, you want the skillet to be very hot, then add the oil and allow it to reach smoking point.

Add in the mushrooms and sprinkle some salt on top, the salt helps bring out some of the moisture and adds flavor.

Don’t stir them at first, let them cook, a large amount of water will be released which is normal.

Avoid stirring whilst there is a lot of water, once the water has evaporated, you can stir the mushrooms a little.

Once they’re done, you could add herbs and spices if you wish but they’re now ready to be added to your pizza.

How do you keep mushrooms from getting soggy on pizza? 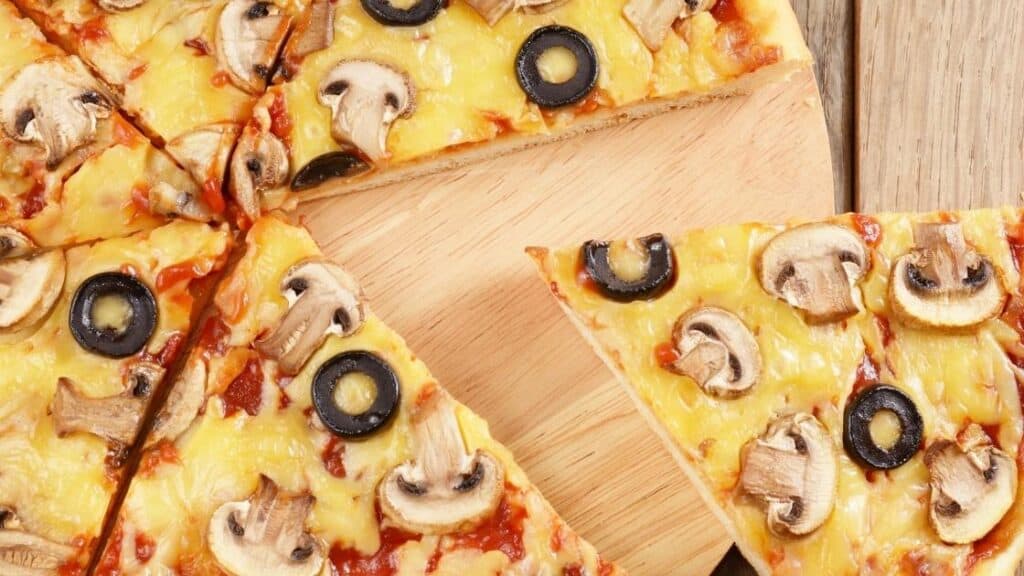 The best way to keep mushrooms from getting soggy on pizza is to saute them before adding to the pizza.

If you want to add them raw, it’s best to only use a few thinly sliced mushrooms.

Mushrooms contain tons of water and when they’re cooked they release this water, adding raw mushrooms to pizza means that you might end up watery pizza.

There are a few things to keep in mind when adding mushrooms to pizza to avoid any soggy mess.

Consider the density of the mushroom you’re using, most people use white (button) mushrooms however you might enjoy a different variety but if the mushroom is quite dense, it could mean that it doesn’t cook all the way through, plus, it’ll release a lot of water.

Whatever mushroom you’re using, you want to make sure you thinly slice it if you want to add it raw. You always make sure that you’re not adding too many raw slices, as this will lead to a watery pizza.

It’s best to pre-cook the mushrooms however if, for whatever reason, you want to add them raw, slice them thinly, and only add a few.

If you don’t want to be limited in how many mushroom slices you can add or the variety, you can pre-cook before adding them to the pizza.

There’ll be lots of water at first, let this process happen, and once most of the water has disappeared, stir the mushrooms a little.

Can you use frozen mushrooms on pizza? 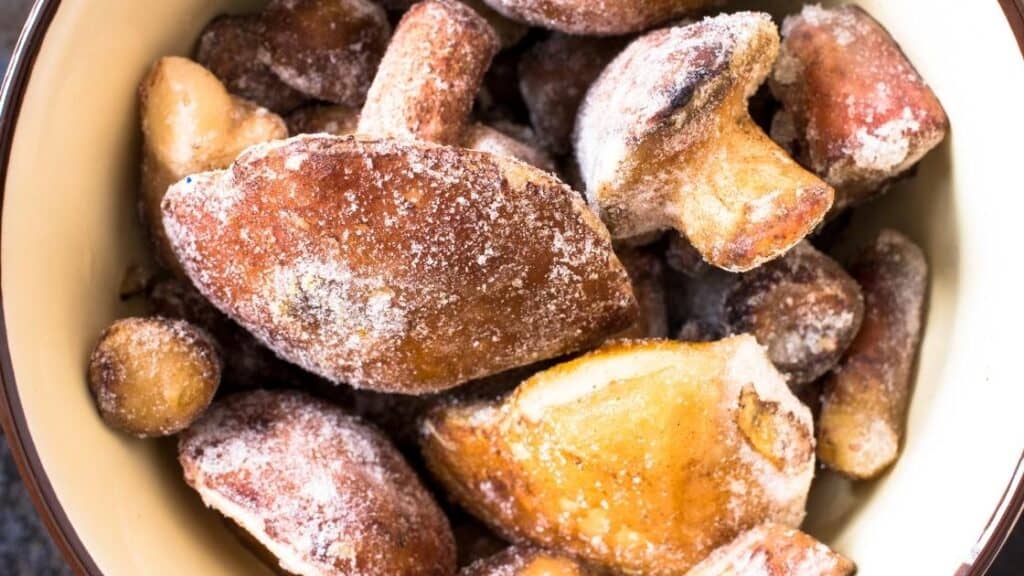 Yes, you can use frozen mushrooms on pizza but you should thaw and saute them first before adding them to pizza.

Adding frozen mushrooms to pizza will leave you with soggy mushrooms and a watery pizza.

Mushrooms contain a lot of water and as they cook, a lot of this water is released.

Unless you’ve cooked the mushrooms and then frozen them, you’ll find that your pizza will end up soggy.

It’s a good idea to thaw out the mushrooms before using them.

This makes them easier to use and makes it easier to tell if any of the mushrooms have gone bad.

If the mushrooms weren’t stored correctly, or the container was damaged, the mushrooms could have gone through freezer burn and gone bad.

When removing mushrooms from the freezer check for any signs that they’ve gone off.

You can thaw them out by leaving them in the fridge overnight, on the counter for a few hours, or place in a bowl of water.

As the mushrooms thaw, they’ll be getting rid of lots of excess water, so ensure you prepare for this.

Once thawed, saute the mushrooms on high heat.

Once they’re cooked, you can add them to your pizza.

You may be able to add frozen mushrooms to pizza if you’re only using a few thinly sliced mushroom slices.

As the pizza cooks, the mushrooms will also thaw out and cook.

The more frozen mushrooms you add, the more likely you are to be left with soggy mushrooms, so it’s best to pre-cook them or use them sparingly if you’re short on time or don’t want to bother with any precooking.