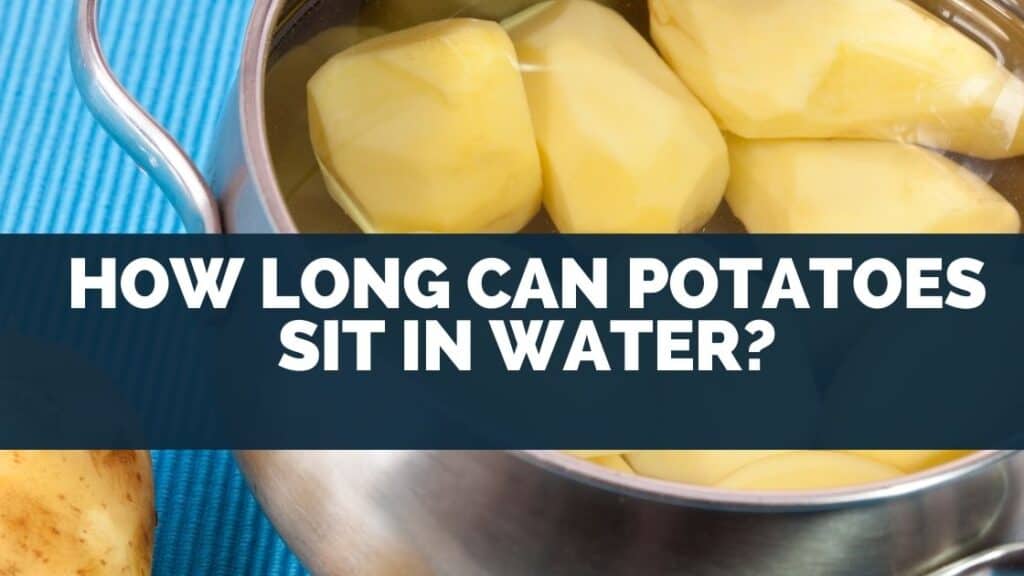 Soaking potatoes in water is a well-known way to reduce the starch content, improve the appearance of cooked potatoes, and change the flavor.

Today, we will look at how long potatoes can sit in water.

Generally, 2 days is the maximum potatoes should sit in water.

Potatoes should also be kept fully submerged in the water as they are soaking.

Otherwise, any part of the potato that is exposed to the air will begin to discolor and turn brown.

In this article, I will explain what happens if potatoes are left in water too long, the effects of soaking potatoes in water, as well as some recommendations from chefs regarding how to soak them to get the best results.

What Happens if You Leave Potatoes in Water Too Long? 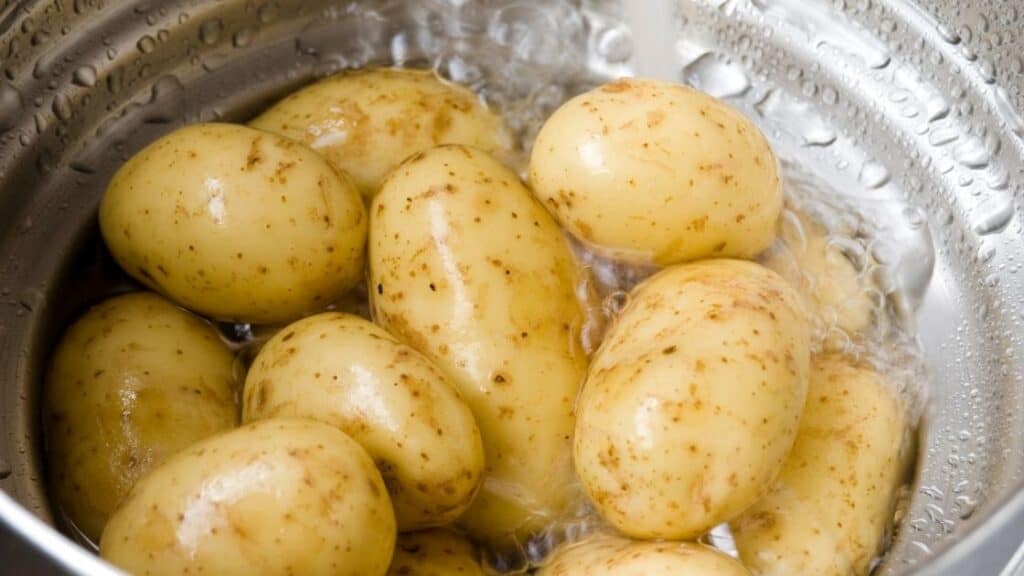 Soaking potatoes in water has benefits.

But, leaving them too long isn’t required and should be avoided.

This is because of the following reasons.

They start to become soft in the outermost ¼ of an inch (0.6cm).

In certain recipes such as mashed potatoes, this isn’t an issue.

However, any recipe where the shape of the potatoes matters such as chips, and potato salad, soaking them in water for more than 48 hours should be avoided.

This occurs because the water soaks into the potatoes.

It occurs to a lesser to a greater degree based on the type of potatoes.

Starchy potatoes that have a softer texture such as Yukon gold potatoes, tend to get softer than waxy potatoes.

This is due to the flesh of the potatoes being softer in starchy potatoes compared to waxy potatoes.

Soaking potatoes overnight or for a few hours is perfectly fine, and leaving them for longer than that doesn’t add any additional benefits.

Potatoes soaking in water should be covered.

This will stop any dust in the air from getting into the potatoes.

Plastic wrap and tin foil work well as a cover for soaking potatoes.

In warmer climates and seasons, potatoes soaking in water should be kept in a cool place.

Such as, the fridge, or a dark area of the pantry.

You may have come across potatoes that are black in the interior.

This is caused by how they are stored, as well as the growing conditions.

I explained what it is, what causes it, and how to avoid it when you grow potatoes or store potatoes.

This info can be found in this article about why potatoes turn black.

What Does Leaving Potatoes in Water Do? 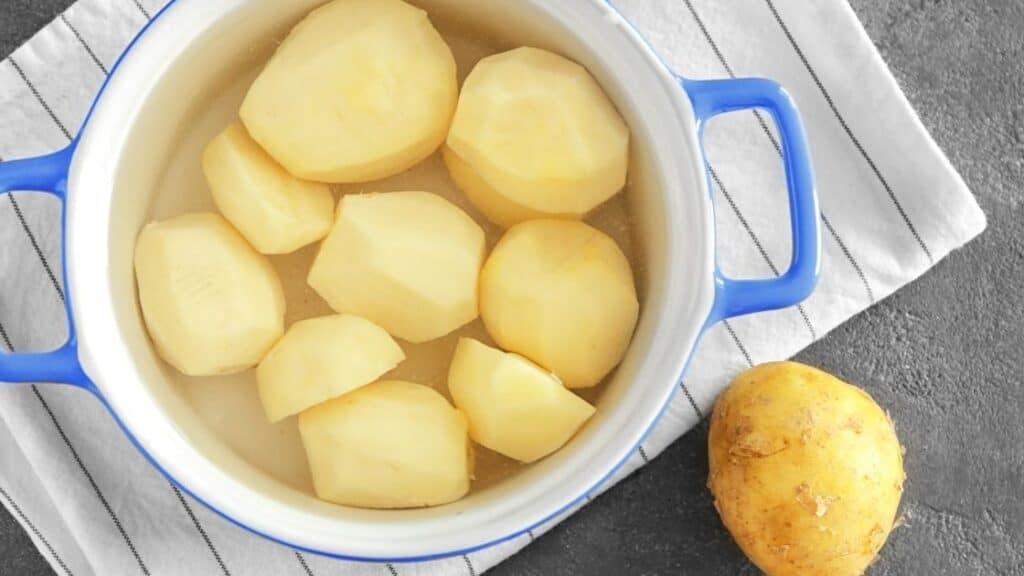 Soaking potatoes in water is a technique that not everyone is familiar with.

I, in particular, never came across anyone soaking potatoes before cooking them.

But, later on, I learned what it does from chefs and people who have done it before, and here’s what it does.

Leaving potatoes in water removes some of the starch.

Doing so helps potatoes to keep their shape after being cooked.

It also changes the flavor, which some people prefer.

This is especially helpful for recipes such as potato salad, and chips.

Starchy foods such as potatoes, sweet potatoes, and root vegetables such as taro and cassava, have a tendency to be quite heavy and filling.

Removing some of the starch via soaking them makes them ‘lighter’ and easier to digest.

It also removes the flavors that come from the starch.

In summary, the main benefits of soaking potatoes are:

It’s recommended from chefs add salt, lemon/lime juice, or vinegar to the water before submerging the potatoes in it.

The mild acid improves the appearance of potatoes.

Potato starch is also used as a baking ingredient

Starch when separated from starchy foods such as potatoes is fine as a powder.

It is extracted in many parts of the world because it keeps for a long time.

Potato starch is then used like flour in various recipes.

To make it potatoes are cut, or shredded to increase the surface area of the potatoes.

This allows more of the starch in the potatoes to be dissolved by the water.

The potatoes are soaked overnight and then removed from the water.

The potatoes are put into a cheesecloth and squeezed.

What comes out is cloudy water which is full of potato starch.

This water, which is similar to juice, is left in a container overnight.

The starch settles to the bottom of the container.

The water is poured off carefully, not to disturb the starch at the bottom of the container.

The remaining wet starch – with as much water removed as possible – is then left at room temperature to dry.

Or, left in the sun to speed up the process.

After that, it is scraped from the container and pushed through a sieve.

Where it has a texture and appearance of white flour.

Can You Leave Potatoes in Water for 3 Days? 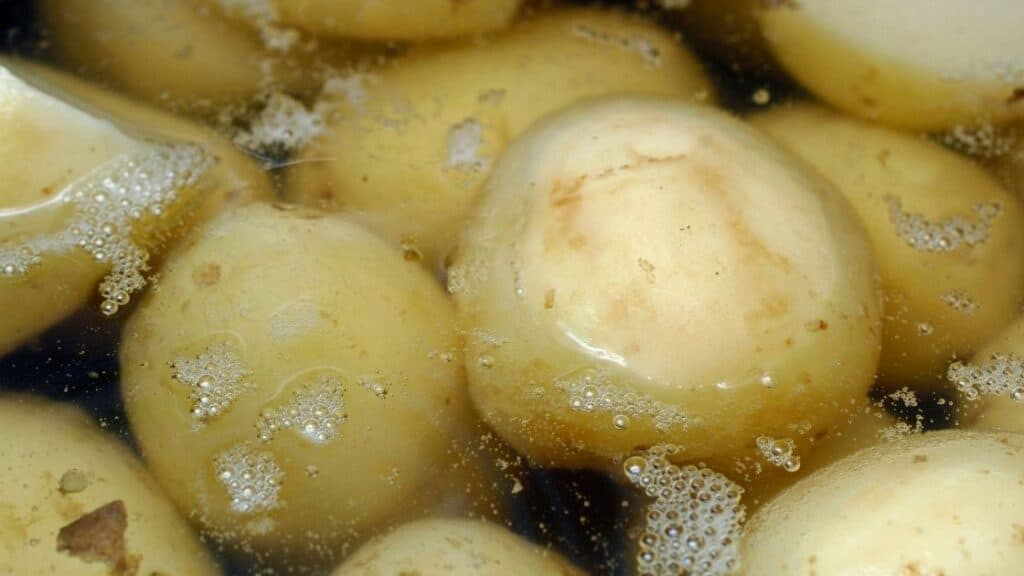 Leaving potatoes soaking in water is great for improving the texture.

But, you may be wondering how long is too long.

And whether you can soak them for 3 days, here’s the answer.

Overnight, or 2 days is ok but any longer than that the texture on the outside begins to soften and makes them fall apart.

Washing potatoes until the water runs clear is also a good option and the preparation time can be less.

A person that worked in a restaurant has said that they would soak potatoes in water to cut down on the preparation time.

As soaking potatoes can be left to remove the starch.

Rather than rinsing them in a colander for a long time.

This is especially helpful for large batches of cut potatoes.

But, if cooking a small amount for yourself, your family, or friends you may decide that rinsing them is in fact easier and faster.

Rather than remembering to soak them the day before.

However, soaking them has the added benefit of giving you more flexibility regarding when to peel and cut them.

For example, if you have a busy schedule you can fit in preparing the potatoes around other tasks.

Because once they’re peeled and cut they won’t turn brown when soaked in water.

And they can be kept soaking in water for a few days.

Raw potatoes can be kept for a long time, but they can also be frozen to preserve them for longer.

Freezing whole raw potatoes isn’t the best way to do it.

I covered the best method to freeze potatoes so that when they’re defrosted they have the best texture and flavor.

It can be found in this article about whether you can freeze whole potatoes.

Does Soaking Potatoes in Water Help Them Cook Faster? 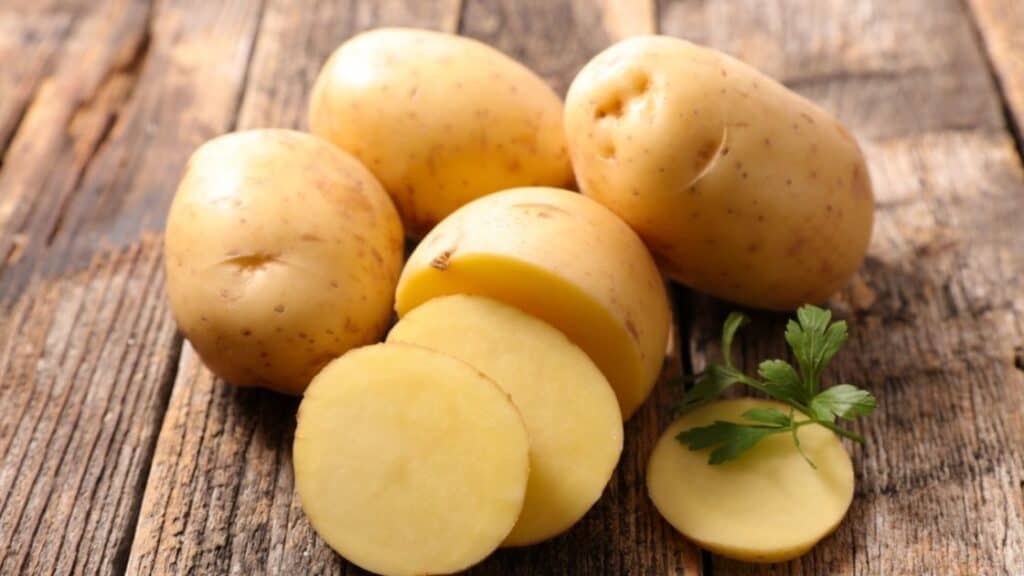 Cooking food faster is something everyone is interested in, especially when preparing a large and elaborate meal, and cooking a lot of food.

But, does soaking potatoes help them cook faster?

Soaking potatoes in water does not help them cook faster.

Although no experiments have yet to be done comparing the cooking times, it’s not reported as the main reason to soak potatoes.

Therefore, it likely does not.

The main reasons to soak potatoes in water is to make them less starchy, give you more flexibility in preparing them, and keep their shape better when cooked.

Starchy in potatoes makes them more filling and heavier.

So, removing the starch by washing them or soaking them in water makes them lighter, and changes the flavor.

Some people prefer the starchy flavor of potatoes, and I personally am not too fussy.

It also means you can prepare them ahead of time when you need to juggle a few different tasks at once.

It also cuts down on the time it takes to wash them in water.

Many people also add a tablespoon or so of lime or lemon juice, or vinegar.

This improves the appearance of potatoes, and many people report that it makes them taste better.

Salting the water also has the same effect, as the salt absorbs in the potatoes.

This disperses the salt more evenly compared to sprinkling on salt after they are cooked.

Because soaking potatoes in water or washing them to remove the starch helps them to retain their shape, it’s a good idea to do this for chips, fries, or wedges.

There are also various ways to create fluffy potato fries with a crispy exterior.

The most recommended method on top of soaking or washing them in water is to double fry them.

But, there are other considerations when baking them in the oven.

I covered all of these in this article, about why you should soak potatoes.

It also explains what potatoes are starchy, waxy, and all-purpose to help you make a better decision about when to soak them or not.